During Session 2018/19, the Boys and Officers  from 2nd Wishaw Boys’ Brigade Company were involved with Wishaw Remembers, a project led by CultureNL Museums and Libraries.

A big part of the project involved the restoration of the Wishaw High School First World War Memorial, which had been in storage in North Lanarkshire Heritage Centre in Motherwell since the school closed in 1992.  Following its restoration, the memorial was installed in our church, Wishaw Old Parish, where it was unveiled and rededicated on Remembrance Sunday 2018.

2nd Wishaw’s  involvement with the project began in September 2018. Ronnie Millar, Company Captain  and myself, Officer in Charge of the Junior Section met with Hilary Petrie from CultureNL Libraries to discuss some ideas for a display to accompany the newly restored memorial using 3-D printed poppies.

We decided that the best way to display the 3-D poppies was to create a wreath.  We then did some research online to get some ideas for how to make the wreath and for  some design ideas for the 3-D poppies. After this very productive meeting, we had a plan set and our designs chosen.

On Monday 22nd October we started to create the wreath.  Our Anchor Boys (Primary 1 – Primary 3 age group) were given the task of making the greenery for the outside of the wreath. They did this by drawing round their hands on green card, then cutting them out. On the same night, Hilary Petrie came along to our Junior Section (Primary 4 – Primary 6 age group). She spoke to the Boys about the project and brought along some of the details about the soldiers on the war memorial. Hilary also brought along the 3-D printer to allow the Boys to see the process involved in making one of the 3-D poppies.

Using red acrylic paint, the Boys then painted thirty poppies that Hilary had printed in advance, one for each of the names on the memorial, to be used to make up the wreath. Once the paint on the poppies had dried, some of the Officers glued the centres into the poppies and painted the stalks green.  Next we tried out a few different designs for the wreath. Our ideas included a single ring containing the thirty poppies, a double ring and a cross shape.

We then decided to try attaching the poppies to a green wreath ring kit from The Range. This idea worked perfectly and really showed off the 3-D aspect of the poppies. After this we painted a piece of MDF black to mount  the wreath onto.  Next we glued a printout of the Wishaw High School logo in the centre of the MDF and laidout the hands in a circle around it and glued them down. We then stuck down the wreath with the poppies attached. Once it had all dried, we added some finishing touches. These were labels with each of the 30 names from the war memorial and a label reading ‘Lest We Forget – Wishaw High School 1914 – 18’.

On Remembrance Sunday, the newly restored war memorial was unveiled during the church service.  Wreaths were laid at all the War Memorials in the church.  Two Boys, Kyle and Kai from our Company and Junior Sections, carried our newly made wreath from the Chancel to the rear of the Church and laid it underneath the Wishaw High School war memorial. Both Boys were really proud to be asked to do this.  Joshua, one of our Junior Section Boys, also did a Bible reading at the service. 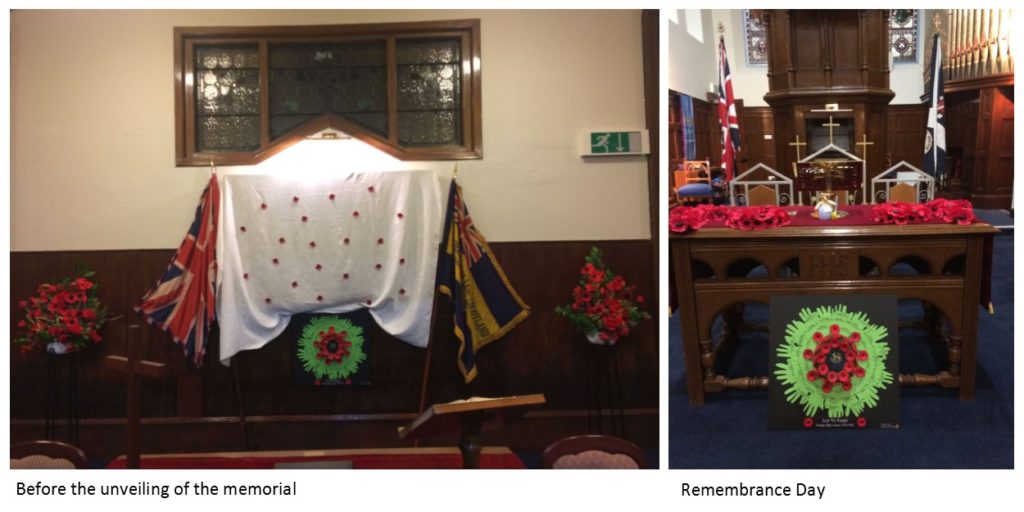 Our involvement with the Wishaw Remembers project continued when Jenny and Michael from Culture NL Museums visited our Junior Section on Monday 20th May to do an Object Handling Session with the Boys. They brought out a number of items for the Boys to see, touch and read.  These included medals, booklets and parts of uniforms.  The Boys really enjoyed doing this and asked plenty of questions!

The Boys then picked out an object each that they liked and wrote about why they chose it.  This work will form part of the Wishaw Remembers display, firstly at North Lanarkshire Heritage Centre, and then alongside our Wishaw High School wreath at Summerlee Museum.

The Officers and Boys of 2nd Wishaw BB Company are really proud to have been chosen to be involved in Wishaw Remembers and in our contribution to the project. Our Boys have enjoyed all aspects of the project. In particular, they told us they enjoyed painting the 3-D poppies, seeing the finished wreath, seeing the 3-D printer, seeing and handling the objects from WW1, picking objects for the display and finding out about WW1.

The Boys feel happy and proud about the wreath and that the objects they picked are going on display. Most of them will go to see the completed display and have said they would like to find out more information about WW1. We asked the Boys to write down something that they learned from being involved in the project. Here are some of their answers:

Kai wrote: “I learned that the food that the soldiers got to eat during the war tasted horrible so some soldiers wrote home to their families to get them to send them a bottle of tomato sauce to put on their food so it tasted a bit better.”

Joshua wrote: “I learned a lot more about what happened in World War One.”

Harrison wrote: “I learned more information about World War One, what the soldiers and the people who lived then used to wear. I liked reading the soldier’s letters home and finding out a bit more about them. It was interesting finding out about some of their jobs and what they had to do when they were in the army.”

Neil Hawthorn is the Officer in Charge of 2nd Wishaw Boys’ Brigade Company Junior Section. CultureNL Museums would like to thank Neil, Ronnie and everyone else in the Company for generously sharing their time and enthusiasm during the Wishaw Remembers project!

The Material Culture of Banners