I came up with the idea of a Victorian-style display of curiosities after a happy afternoon of trawling through the Ethnographic collection in the stores at Motherwell. Ethnography, as you can probably figure out, was the study of peoples and cultures, especially those living outside of industrial society. Most of this material came originally from the Airdrie Public Museum, which boasted a huge collection of items from around the world that Victorian and later collectors considered exotic, ancient or even bizarre.

My display, the ‘Cabinet of Curiosities’ on Summerlee’s mezzanine, is not limited to Airdrie collection items, but it gives a good idea of Airdrie’s themes, which included natural history, ethnography, and archaeology. Because the ethnographic collection was what inspired the display originally, I would like to use this blog to showcase some of my own favourite items.

None of the following objects were made by machines, and not one of them follows a standardised pattern. Though they represent various styles and traditions, each object is unique, as varied and individual as the hands that made them.

Our Ethnographic items vary widely not just in geographic origin, but also in style, materials and function. A good number of them are functional items, but far from being bland tools, they combine practicality with decoration. They leave you with the sense that the artists would go to work on anything they could get their hands on, so strong was their impulse to create. 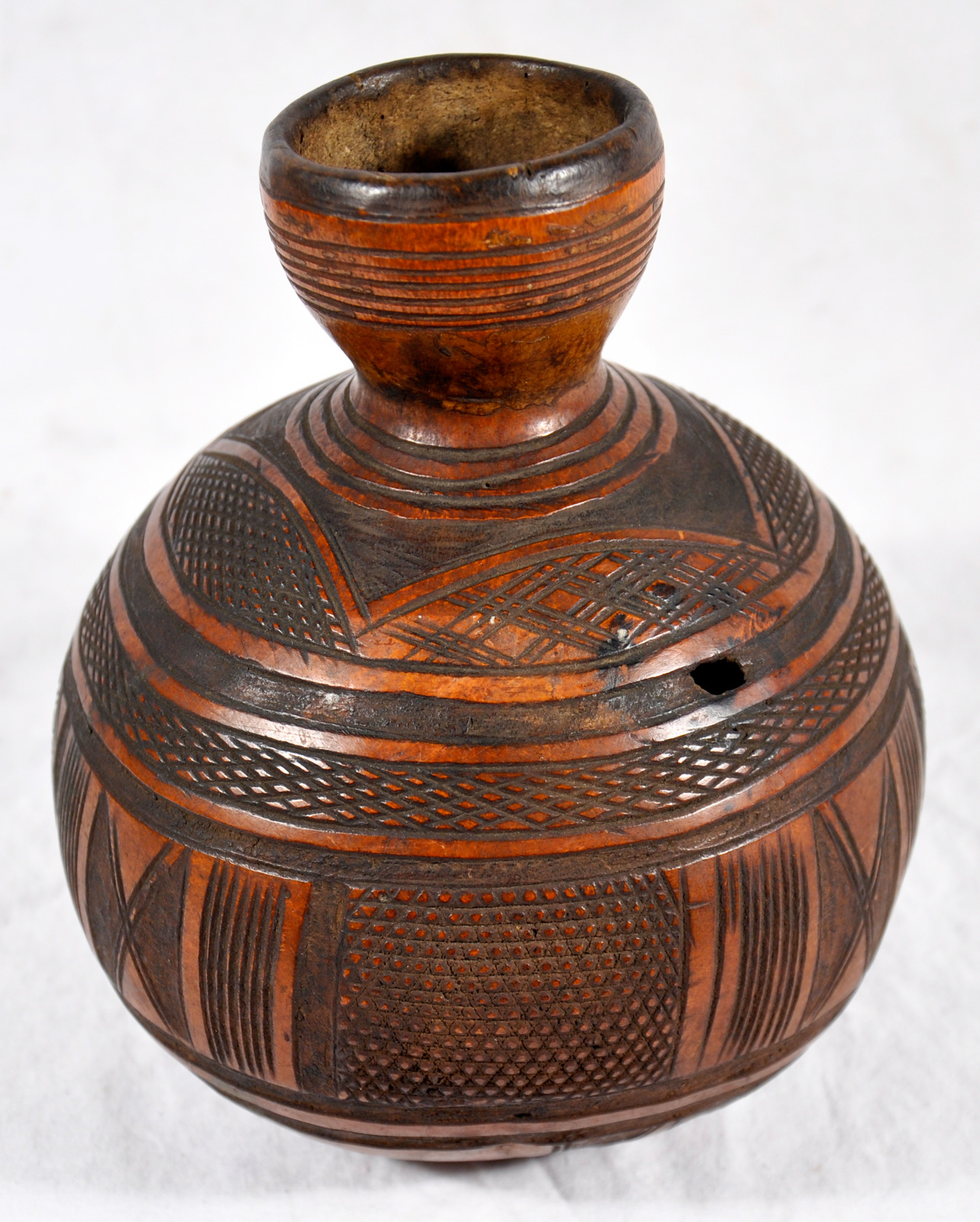 This Nigerian bottle, for example, is made out of a gourd, beautifully carved with patterns. It is interesting to think of the many hours of practice and observation that the unnamed artist must have invested in his craft. The result shows technical skill as well as natural talent, and speaks to the creativity of both the individual and the culture that turned vegetable husks into works of art. 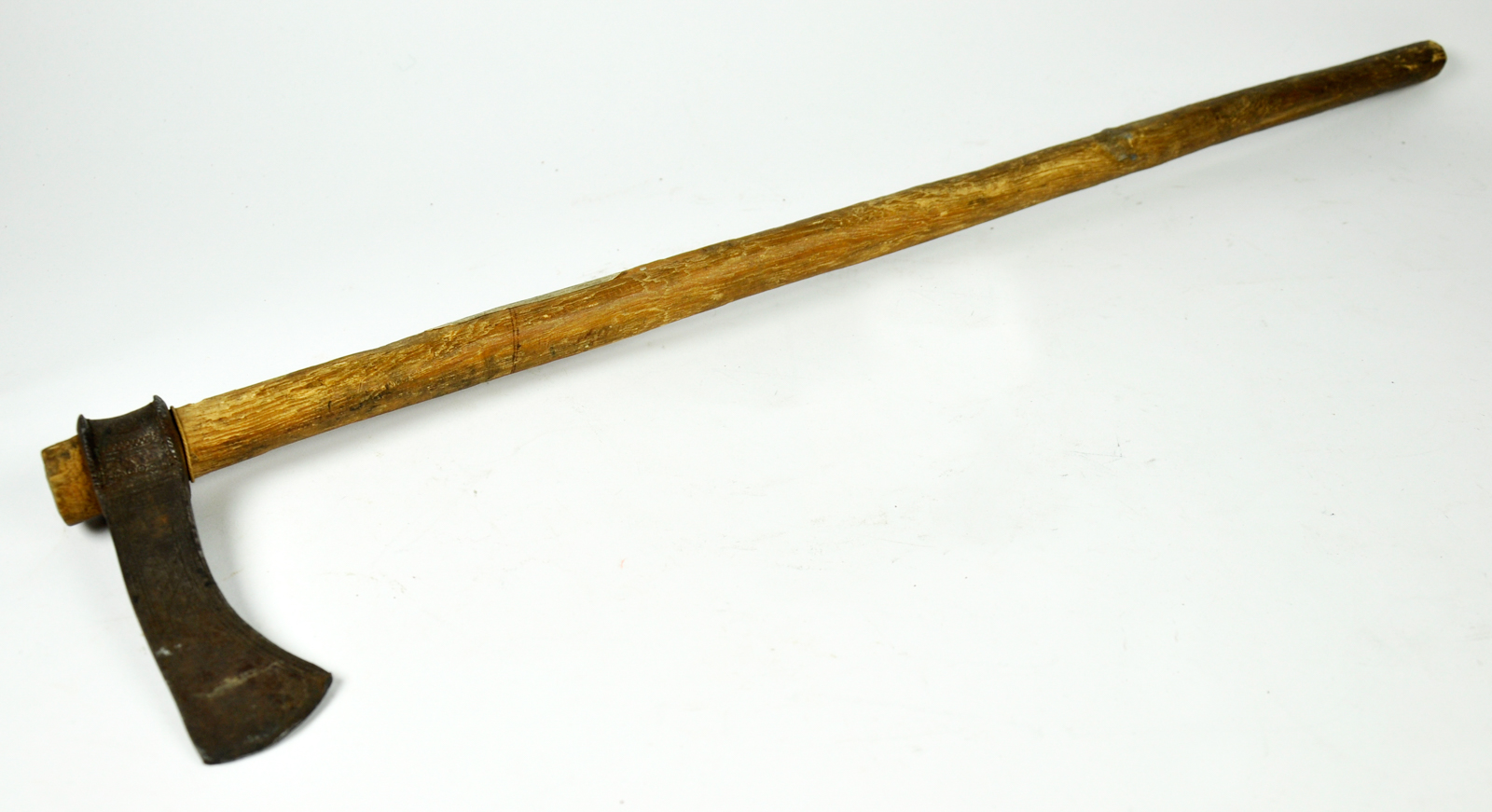 This elegant ice axe from Sápmi (aka Lapland) has fine geometric patterns on the blade. The tool is perhaps even more impressive as a piece of art than the bottle above, as the patterns are so miniature and refined, and the hard iron would have required more skill to work than the soft gourd. The ice axe is also remarkable because, while it is beautiful, it would also have been a dependable survival tool. The whole axe weighs so little that it can be carried with only the thumb and forefinger, making it ideal for long treks through the frozen north. 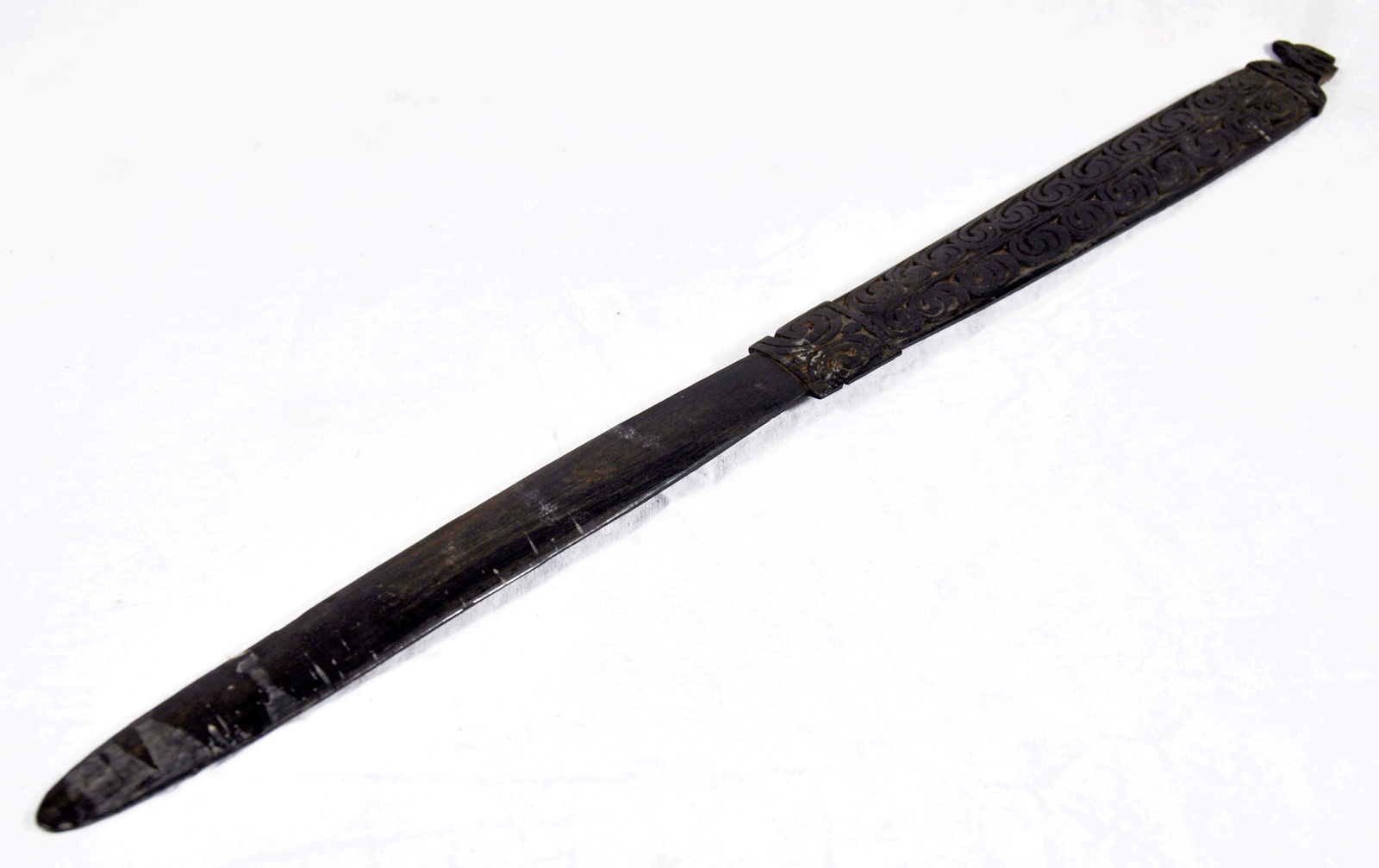 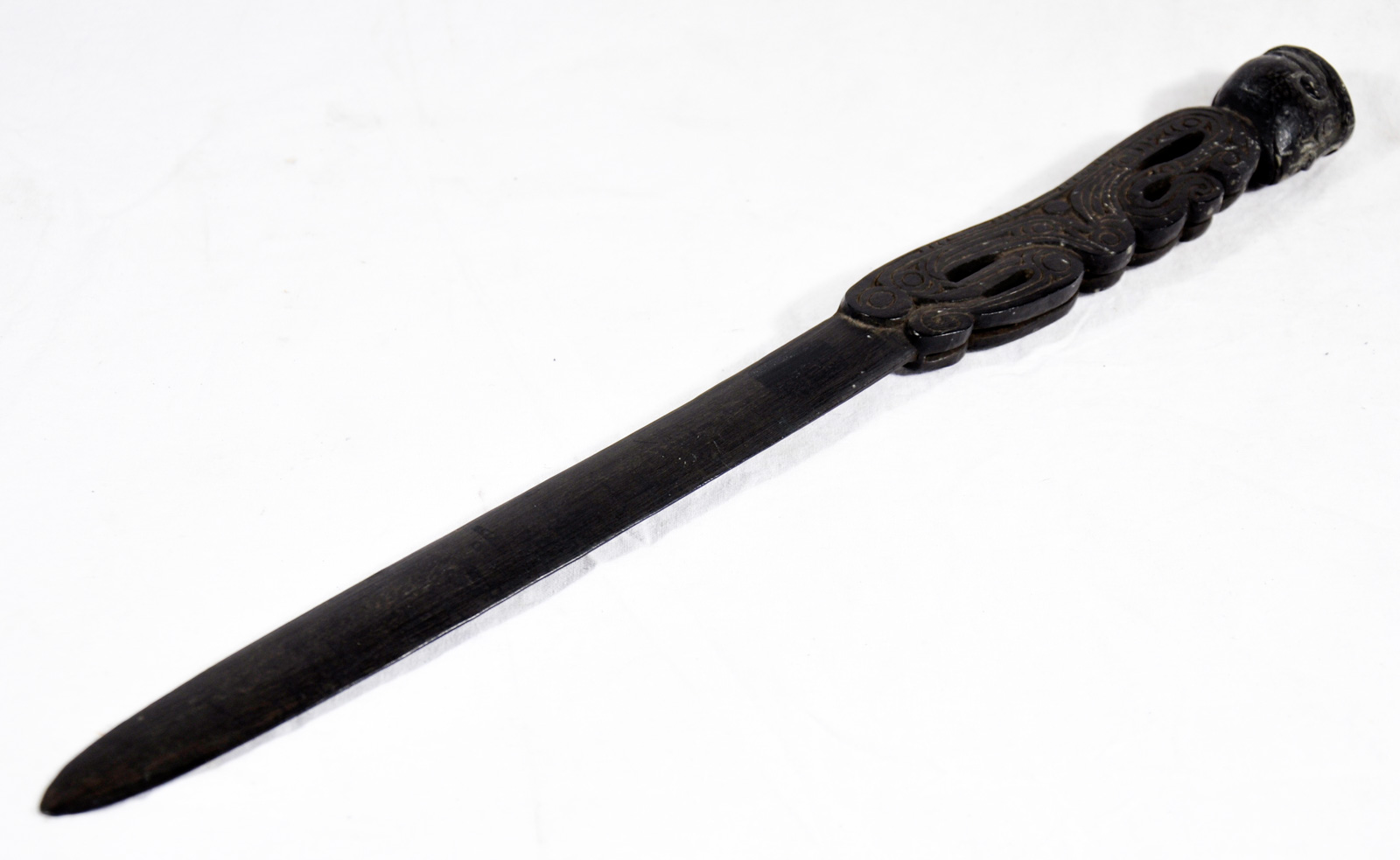 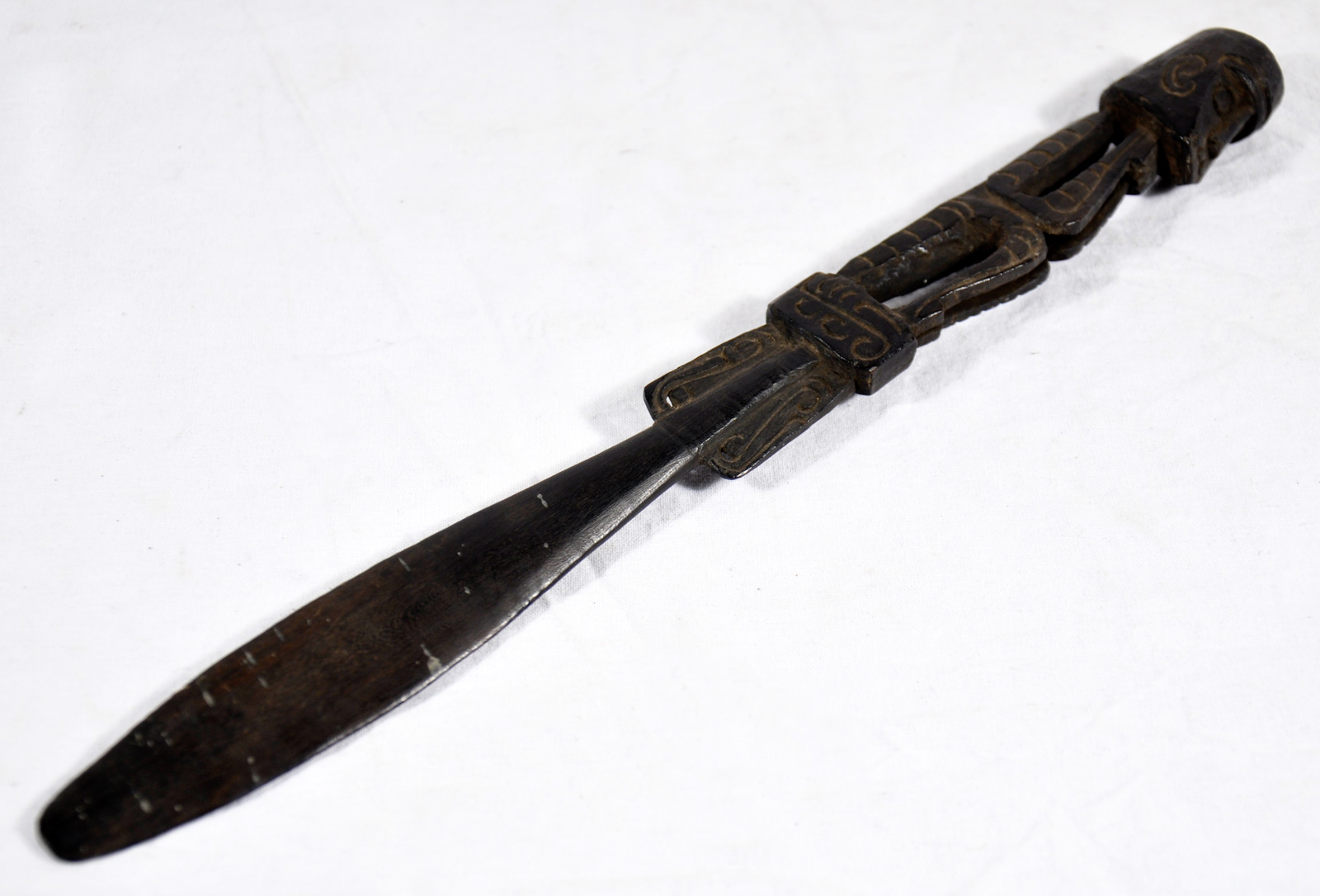 The artistry of these Melanesian spatulas really stands out. Such spatulas were used for dipping in lime powder, which was chewed with betel nut (a mild stimulant drug, equivalent to tea or coffee). They were used in the traditional system of gift exchange, but also for trade among the island tribes – the craftsmen were using their skills to create wealth almost out of thin air. There have been attempts to link South Seas art with the Animal Style art of the Scythians and related cultures. Scythian art had some influence on Chinese art, as well as Celtic and Germanic styles in the west. 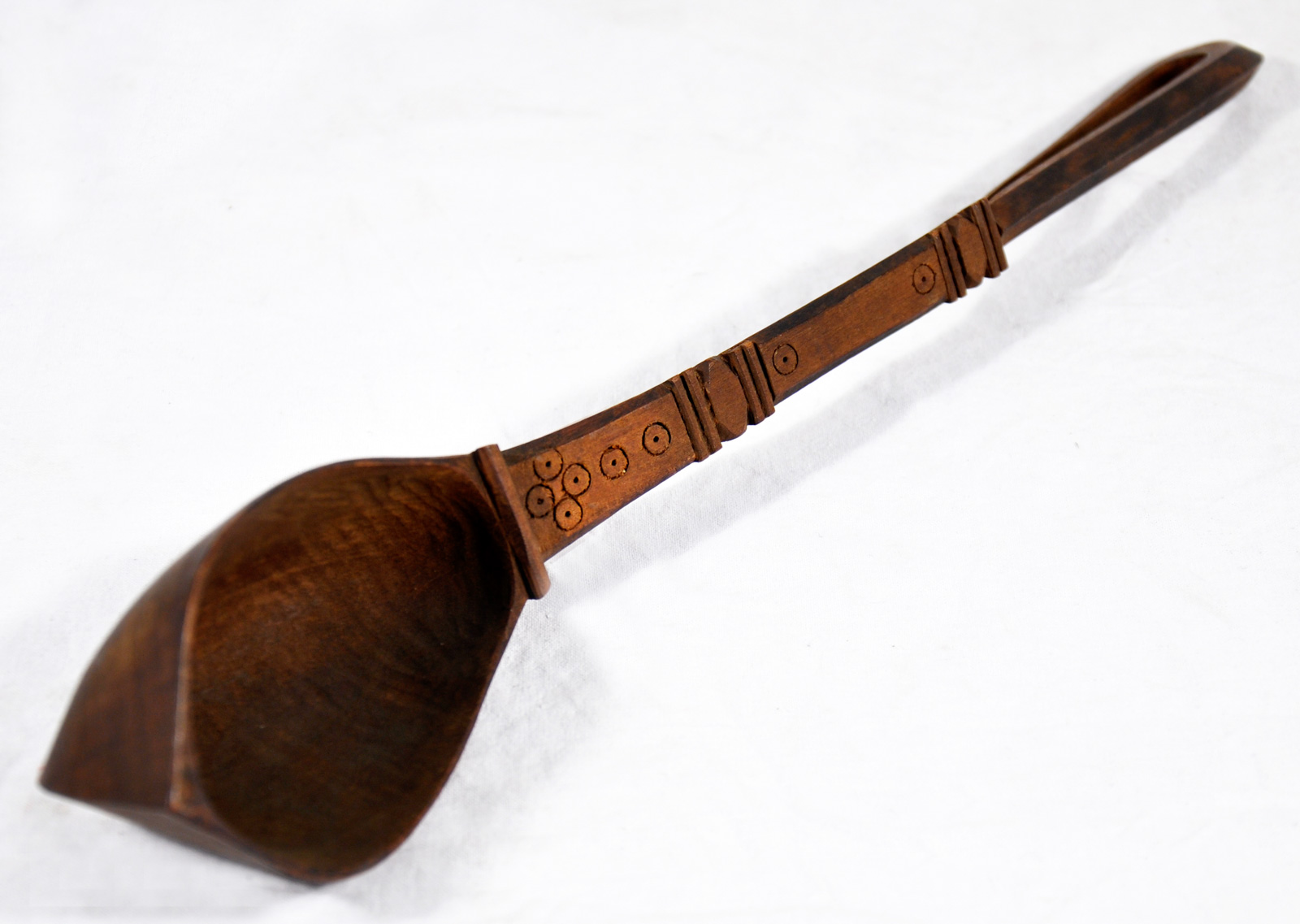 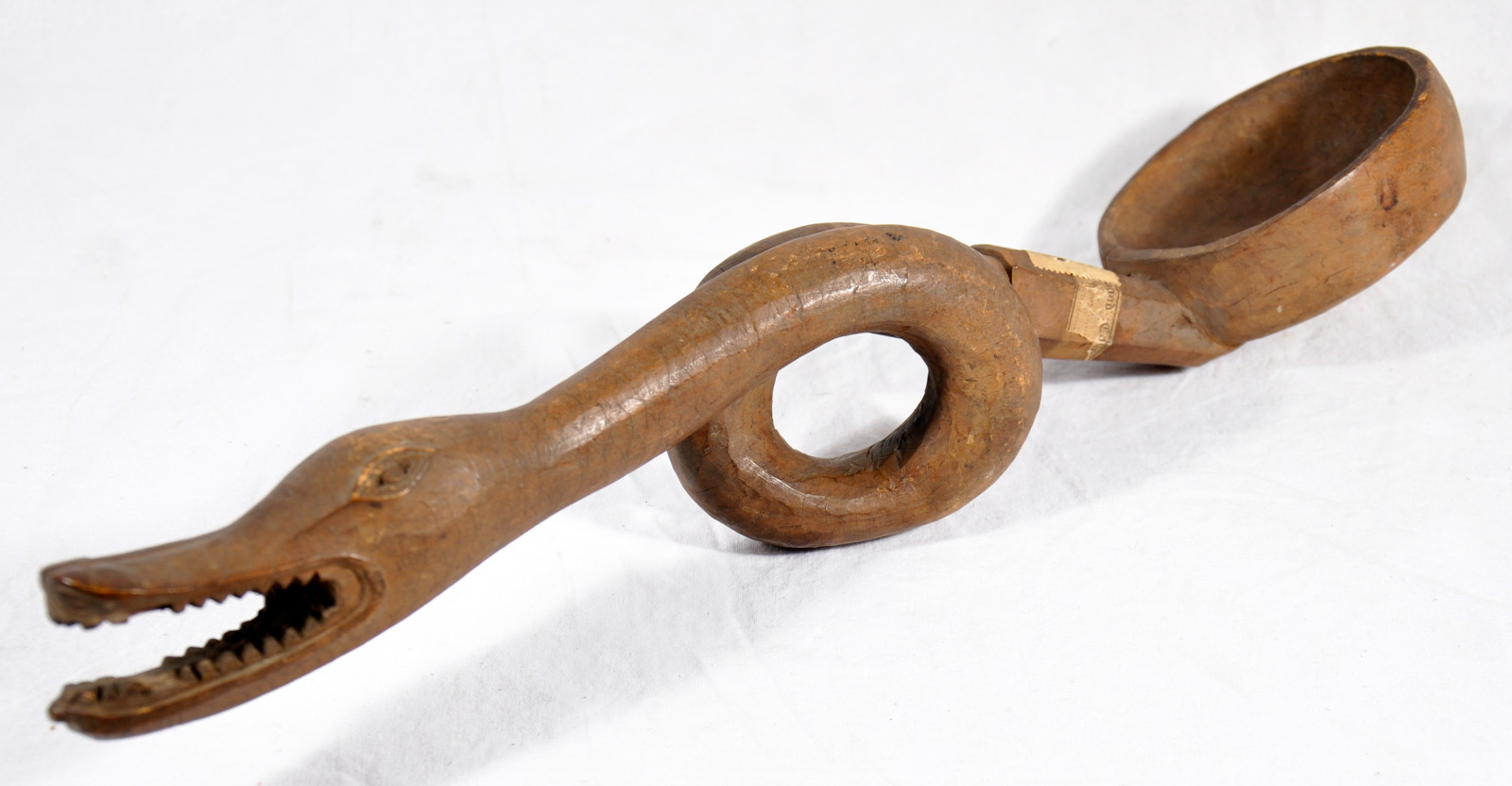 These African spoons are very impressive pieces of woodwork, especially the looped crocodile and the amazing twisting effect on the biggest spoon. Not much is known about where they originated, as the Airdrie collection included items from all over the African continent. Instead of being used for gift exchange like the spatulas, these decorative spoons were most likely for doling out portions at feasts, making them symbols of friendship and hospitality.

One of the most impressive items from the Airdrie collection (and certainly my personal favourite!), this fierce-looking Hindu idol reputedly came from an island temple off the coast of Java, Indonesia. The temple would probably have been off Java’s eastern coast, where it faces the Hindu stronghold of Bali. The god depicted is Hanuman, who has the shape of a monkey – the idol has a long tail with golden rings on it, as well as fangs and clawed feet. Hanuman is actually a very gentle and enlightened god, contradicting his beastly appearance. It is a great example of the region’s unique style of art and religious iconography, with close parallels in Indonesian wooden puppets. The figure was carved in the 1800s from a single block of wood, showing skill and dedication on the craftsman’s part, a fitting tribute to the disciplined god.

Another item from the same area is this Malayan kris dagger. The kris is found all over the islands of south-east Asia, but most likely originated in Java as early as the 1300s. Kris daggers were universally worn by Javanese men, and are also found in legends and epic poetry. Many had magical powers attributed to them, and some were passed down through families (including royal houses) for generations. Unlike some examples, this kris does not have a wavy blade, but it is decorated with gold filigree, and the polished wood of the hilt and scabbard show good workmanship. 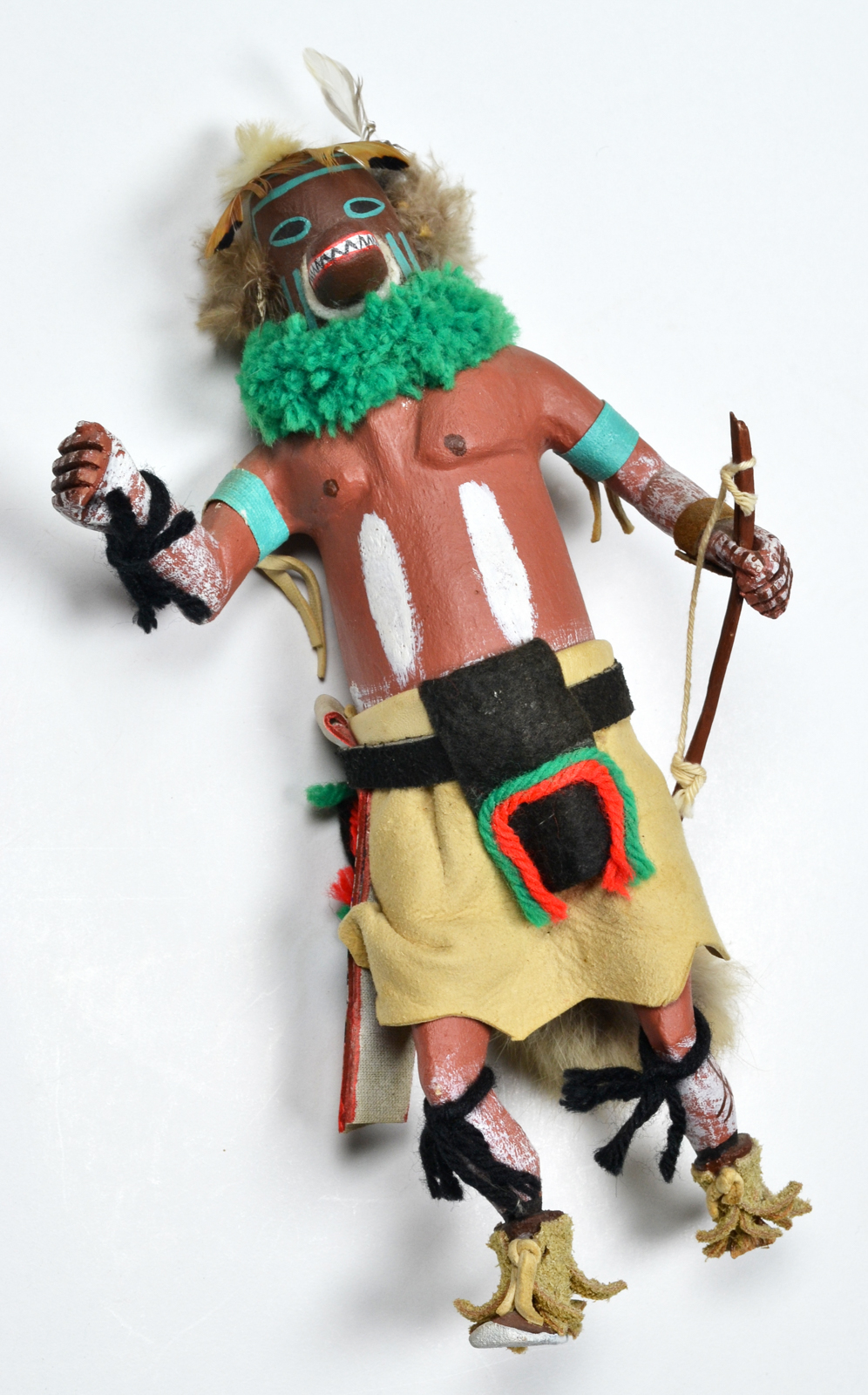 This striking figure, roughly twelve inches tall, is not from the Airdrie collection, but I was able to find out about its origins through research. It is a wooden kachina figure made by a Navajo artist of the south-west United States. ‘Kachinas,’ or spirits, were reverenced by pueblo peoples, particularly the Hopi. Hopi believed that the kachinas visited their villages in the spring each year, bringing rain and fertility to the crops. The earliest kachina figures were made for children’s religious training (teaching them how to recognise different spirits), but around 1900, the Hopi began making kachina figures for a white market, and others followed their example, including the Navajo.

Over time, the dolls became increasingly varied and eye-catching, eventually developing into the dynamically posed ‘Late Action Era’ dolls like this one after 1945. This doll represents a wolf spirit associated with hunting and combat. Wolf kachinas typically have a spear in the right hand and a bow in the left, so our figure may be missing more than just a foot. Like many kachinas, it has real fur (probably rabbit) as well as feathers, and colourful patterned leather adorns the loincloth. The manufacture of kachina figures continues today, with modern examples commanding high prices with collectors.

Calum Forbes was Assistant Curator at CultureNL Museum in 2019 and a volunteer with CultureNL and South Lanarkshire Leisure and Culture.