When you think about Summerlee Museum, what is the first thing you think of? The tram that you can ride through the site? The huge industrial machines inside the exhibition hall? Maybe even the cottages that represent different decades of living in Scotland?

But what about the literal skeleton in the cupboard, hidden beyond the displays?

Hidden away in the stores is a collection of objects gathered by travellers exploring the world during the late nineteenth and early twentieth centuries. They were donated to the Airdrie Museum, and later passed on to Summerlee. Because the objects have changed hands, as well as the high number of objects found and donated during this period, we don’t always know why or how they ended up in Scotland or the history of the objects before they were taken by the travelling collectors.

As part of my Masters Dissertation through the University of Glasgow, I have been researching one of these objects to figure out where it came from, what it was used for before being brought to Scotland, and any other information about the donor’s background that could explain the connection between these international objects and North Lanarkshire. 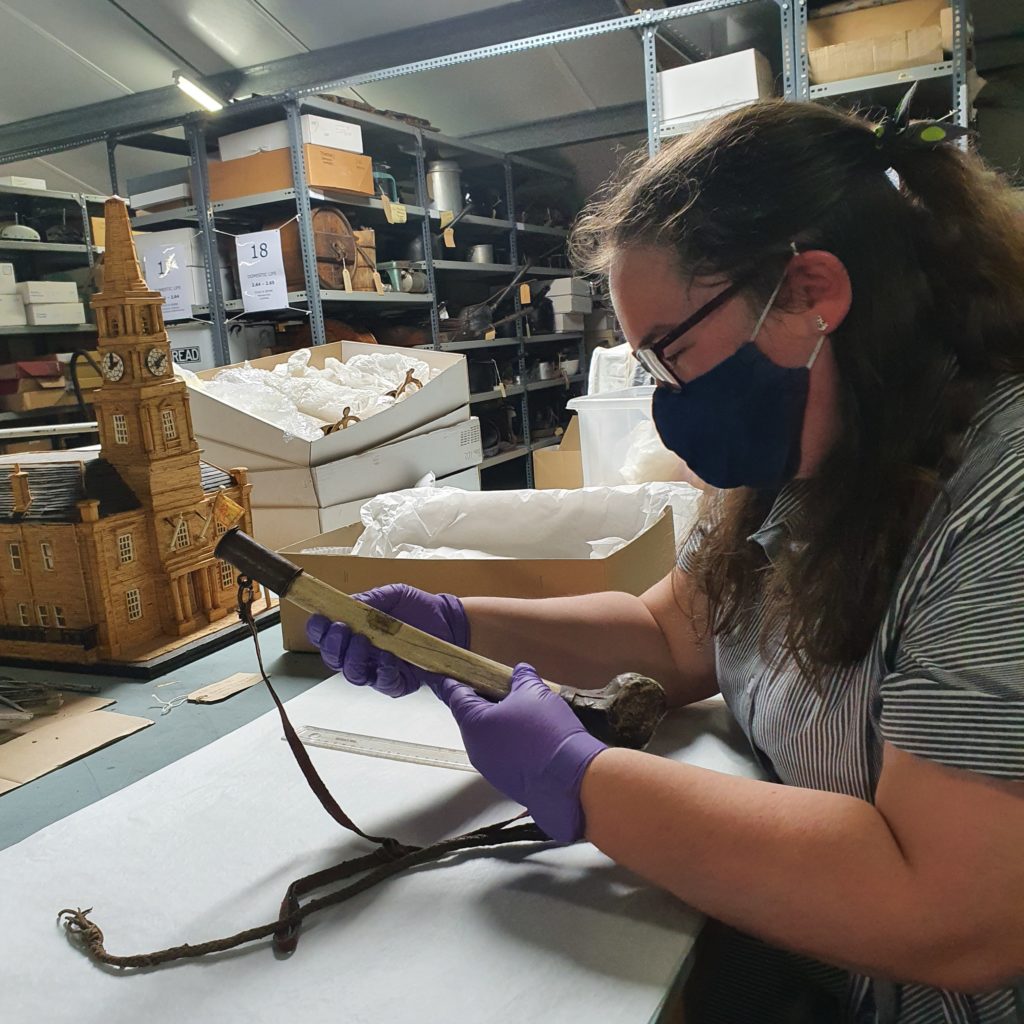 Emilia Reid, University of Glasgow Student, in the collections stores at Summerlee Museum.

This is a task known as provenance research, an important task for museums wanting to better understand their collections – particularly these objects gathered during the colonial era, when object information wasn’t properly recorded.

The object I have been researching is a ‘Thigh Bone Whistle’.

Initially, it was believed that this object had connections to slavery, and would provide an opportunity for the museum to begin discussions of decolonisation by gaining an understanding of why the original collector had brought human remains in the form of an instrument back to Scotland. Could he have been the slave owner and these were the remains of one of his slaves? Or did he have contacts who were slave owners in Africa that also picked this up and gave it to the collector?

When the instrument was donated to the Airdrie Museum in 1926 it wasn’t seen as important to record who the bone was connected to, likely because curiosities like this were still considered to be normal items picked up by the colonial traveller. This meant that when I first started my project, I had the name of the donor, but no mention of the person the bone had come from.

The donor was Evelyn Waddell, the widow of the collector Alexander Waddell, who had spent a large amount of time in Mombasa, Kenya. The collection record included six boat passenger records which listed a Mr A. Waddell, some census records, and information listing Alexander Waddell as the landlord of the original Celtic Park football ground in Glasgow. It was not a lot to go on to trace the history of the whistle, but it gave me directions to start. 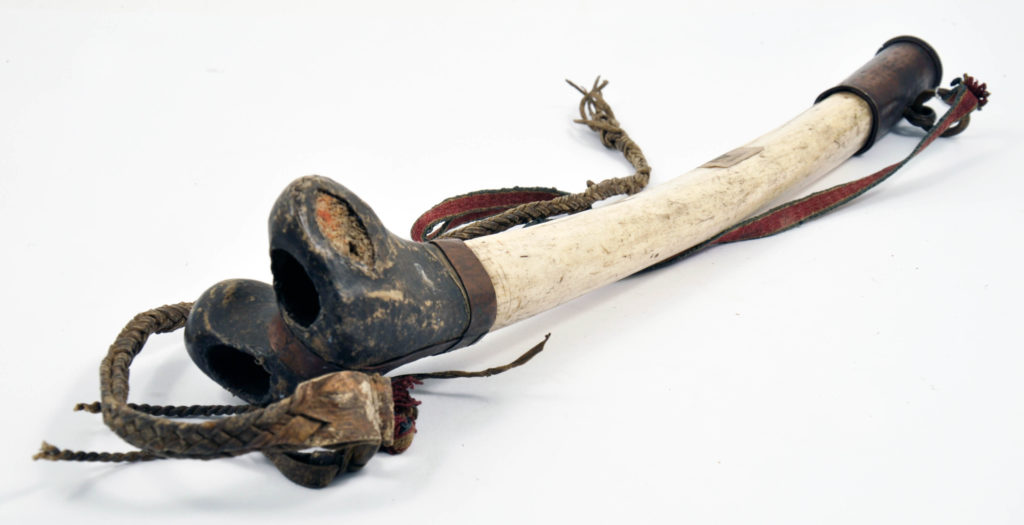 My first task was to figure out what the object actually was. The record called it a ‘Thigh Bone Whistle’ with possible connections to a slave owner. So that’s exactly what I searched for on the internet.

I tried to find any examples of whistles or trumpets made out of human bones in Mombasa, as that seemed to be a reasonable place to assume Alexander had picked it up during his time living there. This gave me nothing. So, I widened my search to anywhere in the world that may have made similar musical instruments during the late nineteenth and early twentieth century.

It was in doing this that I discovered an object called a Kangling, which strongly resembled the images of the ‘Thigh Bone Whistle’ on the collections record. These are found in Tibet and are used within a Buddhist practice called Chöd. What I could find on initially searching this was that it is only performed by trained practitioners. The practise is not shared with the uninitiated beyond the name and its use is in repairing the cracks between the physical and spiritual worlds. It is a practice that has existed in the Himalayas and Tibetan regions far longer than Buddhism itself has been followed in the same areas. 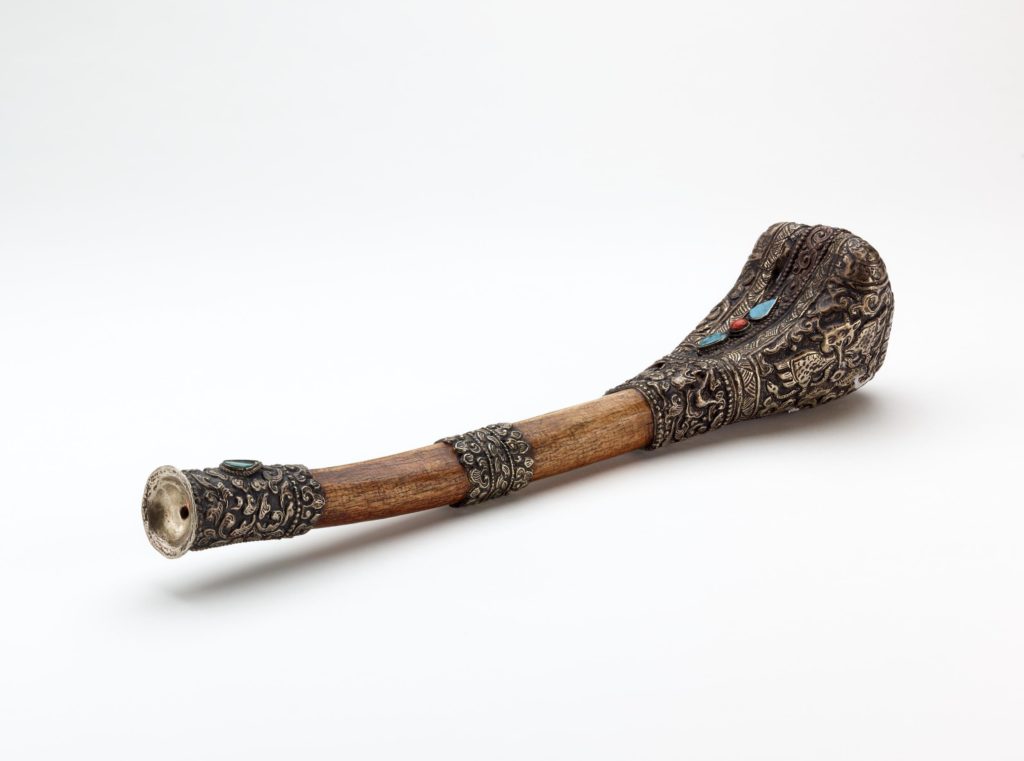 Though discovering the possible origin of the object, and an actual name for it, was a great step forward, it also raised a lot of questions. Did Alexander Waddell ever travel beyond Mombasa, contradictory to the boat records on the file? How did he have something that was connected to a religious practice not shared with outsiders? Was there any British involvement in Tibet during or before Alexander’s lifetime that could have brought this object to Scotland or Mombasa for him to have it in his collection?

These were the questions that began the next stage of my research and will be explained further in a future blog post.