Whilst researching John Main of Ballochney – the New Monkland farmer who carried the East Monkland Covenanter flag at the Battle of Bothwell Bridge – another Covenanter with the same name kept popping up. This John Main was hanged at Glasgow Cross in March 1684 and is memorialised at Glasgow Cathedral.

Is this the same John Main? Did our man with the banner get caught nearly 5 years later, paying the ultimate price for treason? 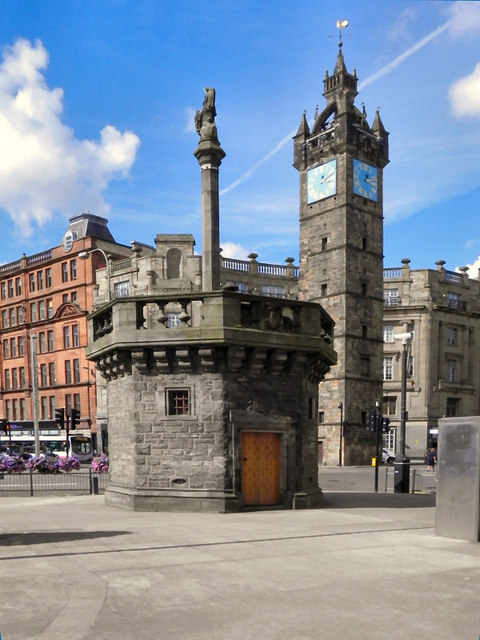 Glasgow Cross in the present day, where John Main was hanged in 1684. This image shows Edith Burnet Hughes‘ 1927 reconstruction of the 17th century Mercat Cross in the foreground with the 1620s Tolbooth steeple behind it. (Photo: David Dixon, 2010 CC-BY SA 2.0)

John Main the martyr is described as “living in the parish of West Monkland” or Old Monkland. This parish included what is now Coatbridge and areas that are now part of Glasgow, such as Easterhouse and Baillieston. Where exactly in Old Monkland he was from isn’t specified.

This is a different parish from ‘East’ (New) Monkland, home of John Main of Ballochney. This parish roughly covers the area from Airdrie to Caldercruix and the moorland villages to their north, stopping just shy of modern-day Cumbernauld.

However it’s not like people didn’t move around in the 1680s – the two are hardly worlds apart either. Mistakes are not uncommon in record-keeping and Monklands Old and New have occasionally caused some quill confusion. So far, so plausible.

Main the martyr was arrested in November 1683 in the Gorbals, then a village on the south bank of the Clyde opposite the growing city of Glasgow. There had reportedly been an increase in Government ‘stop and search’ in a bid to root out rebels. He was carrying weapons when he was apprehended. 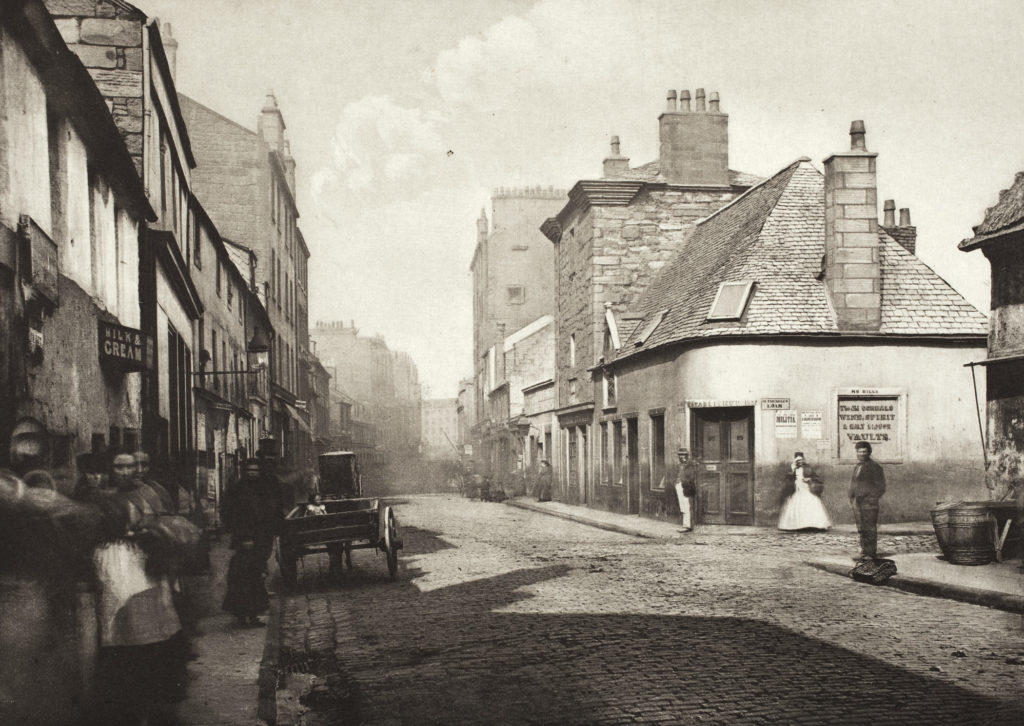 ‘Main Street, Gorbals, Looking North (#37)’, Thomas Annan, 1868. Taken across the road from where the Citizens Theatre is now, this image of Gorbals Main Street before its 1870s remodel shows some buildings (such as the 1608 Elphinstone Tower on the right) that would have been around at the time of Main’s arrest here.

He was subsequently put on trial and sentenced to execution, but not without a foiled escape attempt. He was hanged at Glasgow Cross in March of the following year.

John Main’s testimony on the gallows is recorded in A Cloud of Witnesses. As far as we know, he was not of noble birth or distinguished education. Regardless his final words show him to have been a formidable and erudite speaker, laying out an extensive polemic to defend the Covenanter cause and mercilessly attack ‘Charles Stuart’: “for though he was once king, he is now a tyrant”.

His comprehensive – methodical even – railing on the ruling order feels a little like a 17th century echo of the famous 1918 ‘Speech from the Dock’ by Red Clydesider John Maclean. Whilst at first glance a 17th radical Calvinist and a 20th century revolutionary socialist schoolteacher might not seem to share much in common, relative to their contemporaries the two are perhaps not that far removed.

So was this John Main of the flag?

A key bit of evidence is in Rev James Begg’s 1880s description of the banner where he is described as “John Main, elder, of Ballochnie”. We assume that Begg learned this from the Main family themselves, having visited the Airdrie pub they managed in order to see their ancestor’s banner on display.

According to Sir James Knox, the Airdrie Savings Bank president-cum-Provost and local historian, the ‘elder’ informs us that he was the head of a family in the manner of ‘senior’ (rather than the position of ‘Elder’ in the Church of Scotland) and likely had a son named John who would be styled as ‘John Main, younger’.

from the Airdrie and Coatbridge Advertiser, 28th August 1937

Knox points out that in the last testimony of John Main hanged in Glasgow he bids farewell to his mother and two sisters but no wife or children, as would be customary if he was a husband and father. The absence of this would point away from the martyred Main being John Main, elder, of Ballochney.

However, Knox doesn’t explore another possibility – was he John Main of Ballochney’s son instead?

Main the martyr doesn’t mention a father in his farewells – suggesting that if he was Main of Ballochney’s son, Main of the banner was dead by the time of the 1684 execution. Brothers aren’t mentioned either, meaning that if the banner was passed through the Main family it would have to go through his sisters’ lineages.

The Main family who ran the Gushet House pub in the 1800s, where the East Monkland flag was displayed, claimed Main of Ballochney as their ancestor. So unless there was marriage back into the Main name from the sisters’ families (not impossible) this would suggest these were two separate Covenanting John Mains from the Monklands area. 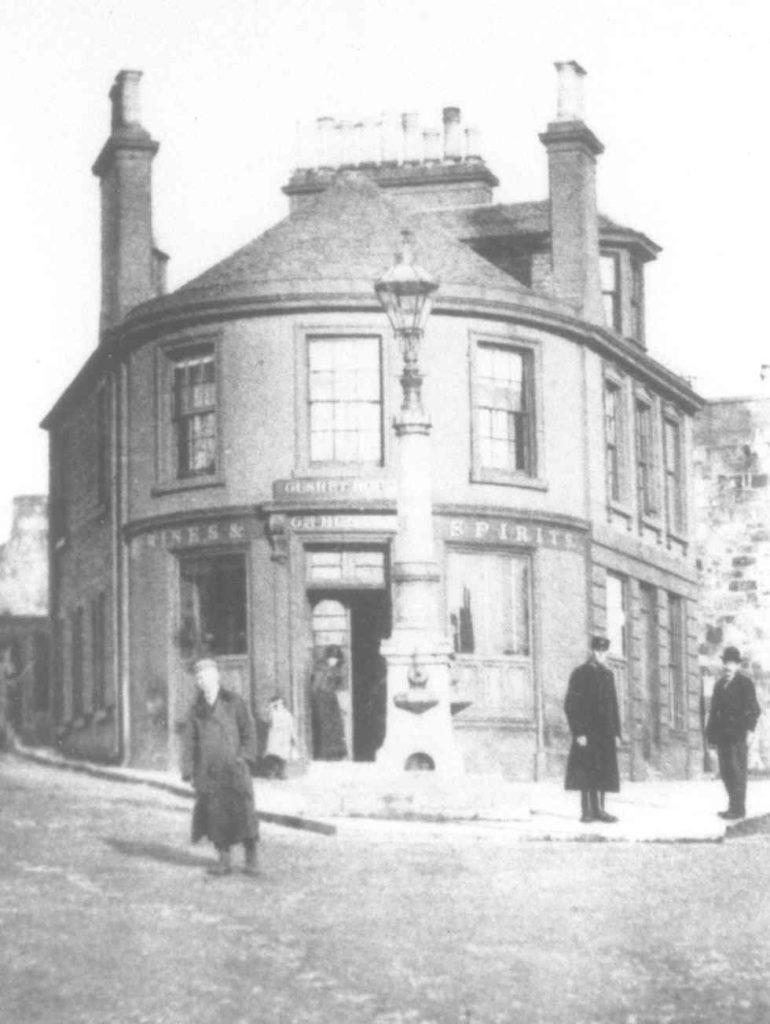 As with the Whitelaws of Stand and Bothwellshields it isn’t altogether impossible they are connected as there are quite a few similarities. It doesn’t seem like enough is recorded about either figure to say how they may or might not relate to one another.

As with most people of their time (and unlike the ‘great men’ of their day) there are no surviving accounts of their character, detailed family histories, or painted portraits. Written record of their lives is patchy. To fill the gaps we have a last testimony and a banner.

What their stories do give us, in their own separate ways, are individual snapshots into the lives of two ordinary Lanarkshire people living through extraordinary times.

These glimpses allow us to try and shape an understanding of who they were and the wider phenomenon that they represented. Neither John Main was rich or powerful, but they became active participants in trying to – as they saw it – re-shape the world around them. 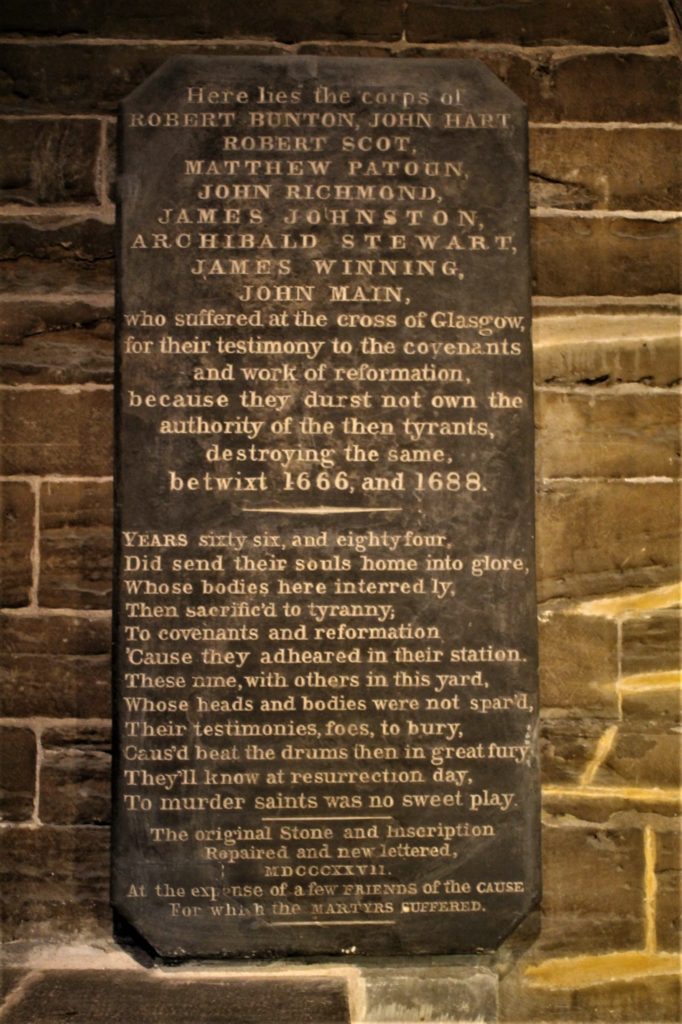 Plaque in the Lower Church of Glasgow Cathedral, marking the tomb in the north wall where John Main is buried. (Photo: Michael Allan, 2021)