I first joined the North Lanarkshire Council Museums & Heritage team back in October 2006 as an outreach officer in a pan-Lanarkshire project called Museum Resources for Social Integration. Before that, I’d been a seasonal attendant at the Highland Folk Museum, a conservational cleaner, educational facilitator and visitor services assistant at the National Museum of Rural Life, and assistant keeper of education at Paisley Museum & Art Galleries.

The outreach project gave me tremendous scope to get to know Lanarkshire’s museums, staff and volunteers and to work with local communities in a wide range of mini projects. Highlights included Sharing Stories, a Community Learning partnership encouraging connections between female Congolese refugees recently housed in Motherwell and a local women’s creative writing support group; Inside the Institutions, an oral history project recording the memories of former staff and residents of Lanarkshire’s mental health hospitals; and Weaving the Threads, a 12-week programme for adults affected by mental and physical disabilities to engage in creative writing and visual arts activities at the David Livingstone Centre.

As the project drew to a close, a vacancy arose in North Lanarkshire for the position of social history curator. I jumped at the chance to move into a curatorial role with a focus on public engagement – it seemed the perfect opportunity to gain new skills and knowledge while making the most of my museum experiences to date. I was lucky enough to be offered the post and began my curatorial career in February 2009.

As social history curator I’ve been blessed with a plethora of opportunities and experiences. I’ve accepted countless donations and set up loan agreements; recorded dozens of oral history interviews with North Lanarkshire residents; attended training days, seminars and conferences; supervised stalls at local history events; delivered talks to heritage societies; undertaken a major re-organisation of the social history store and, most recently, helped to digitise North Lanarkshire’s wonderful collections and get them online.

Some of the most fun has come from developing and installing exhibitions. In the past decade I’ve helped create a new permanent display at North Lanarkshire Heritage Centre; added a 1980s living room to the miners’ row at Summerlee, developed temporary exhibitions; supported community-based displays marking events like Black History Month, and even participated in a pop-up ‘Museum in a Marquee’ during the 2014 Commonwealth Games triathlon event in Strathclyde Park.

Among the larger temporary exhibitions I’ve been responsible for, favourites include Stories of Migration, exploring how North Lanarkshire has been shaped by emigration and immigration; 100 Years of Girl Guiding; All In a Day’s Work, looking at the changing role of women in a domestic setting; and In Pursuit of Beauty, which was the ideal opportunity to pull out some of the social history collection’s quirkier objects. Ostrich egg, anyone?

I’ve had the privilege (a joy and challenge in equal measure) of working with the largest cinematography collection in Scotland. Here I must give huge thanks to Chris O’Kane, Scottish co-ordinator of the Projected Picture Trust (PPT)  for his invaluable help and support. Together, we inventoried the whole collection, identified rare or significant artefacts, cleaned and reconditioned kit, and brought World Home Movie Day to Scotland!

Sharing the cinema collection with the public has also been fun. The Cinerama and Cinemania exhibitions explored the development of cinema technology alongside nostalgic memories of going to the pictures, while Behind the Scenes showcased the fascinating film-making collection. Sadly, my final North Lanarkshire exhibition had to be postponed due to COVID-19 but, all being well, Glitz and Glamour: The Golden Age of Cinema will open at the Heritage Centre in Motherwell in summer 2021.

I may not have my curatorial hat on, but I’ll definitely be back! In the meantime, to everyone I’ve had the pleasure of working with during my time in North Lanarkshire, and especially my Museums & Heritage colleagues – farewell, adieu and thanks so much for the amazing memories. 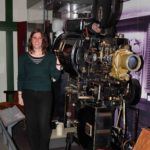 Jenny is leaving North Lanarkshire to take up extra hours at Glasgow Women’s Library, where she has been part-time museum curator since November 2017.

Russian solidarity in Airdrie and Coatbridge during the Second World War: the Leningrad Album in context

Glitz and Glamour: Curating an Exhibition from Home