Hi there! My name is Victoria Butt and I am a student at the University of Glasgow doing a Masters degree in Material Culture and Artefact Studies. As part of my degree programme I carried out a work placement here at Summerlee Museum.

During my time at Summerlee, I discovered many fascinating objects and artefacts that depict different areas of social life and history within the North Lanarkshire area. One thing that particularly caught my eye was all the references to alcohol and drinking. I first began to look into temperance; as abstinence from alcohol is perhaps not something I would first associate with Scotland!

Looking through the archived artefacts, one object in particular stood out to me. 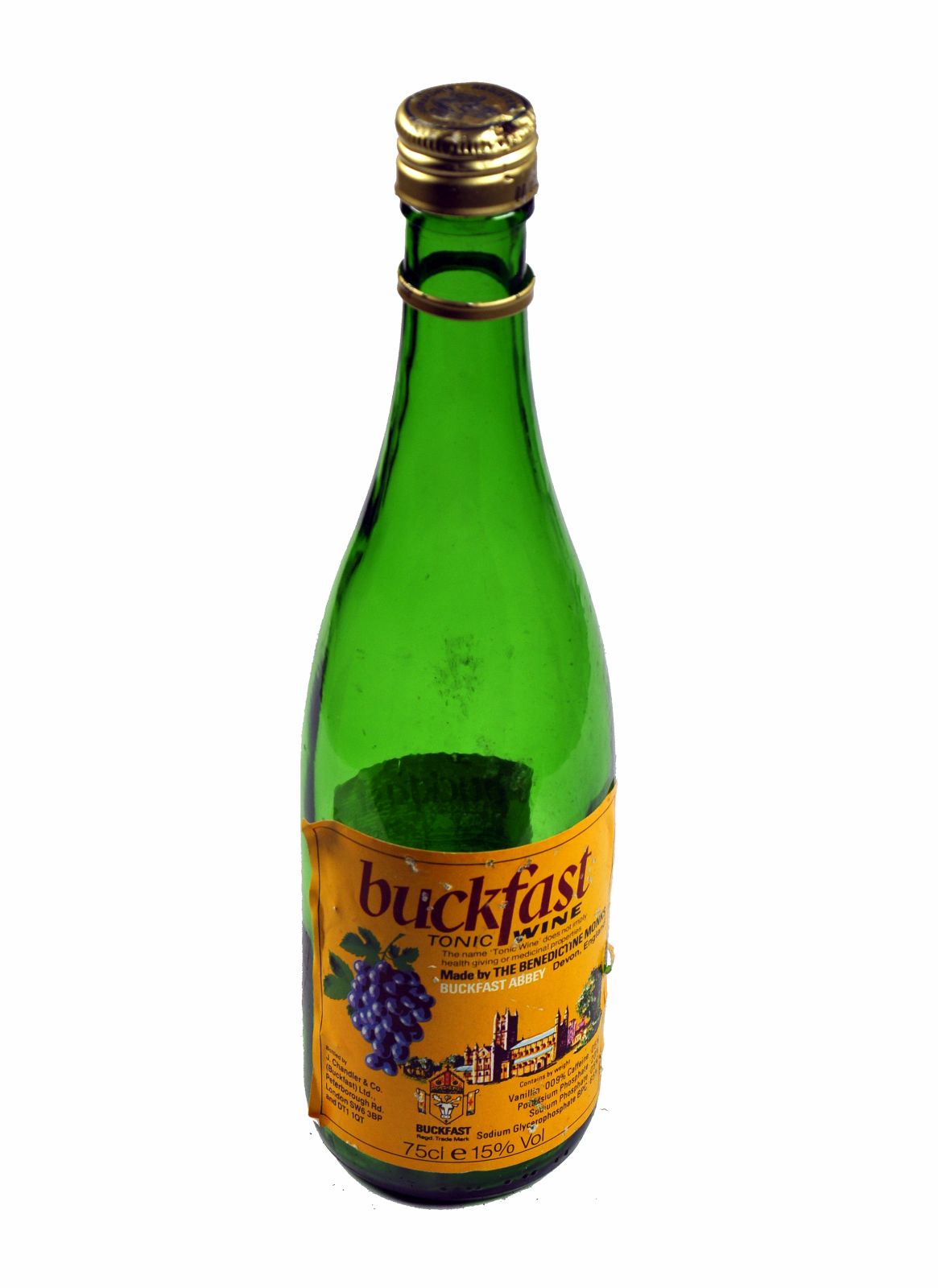 “Green glass and orange label and gold-coloured plastic screw cap. Found discarded behind the Weavers cottage store in Airdrie. Local teenagers often drink at the entrance to Wellwynd Church and throw the empty bottles over the wall. Buckfast is cheap: strong wine and is a favourite drink of alcoholics and under-age drinkers in Lanarkshire”.

This entry seemed odd to me. While I am aware of Buckfast and its popularity amongst young drinkers in Scotland; it is not something I thought I would find in a museum database.

I soon discovered that Coatbridge is known for being a part of “The Buckie Triangle”: the area of Airdrie, Coatbridge and Cumbernauld where the drink is particularly popular. So popular, in fact, that in some trendy bars in London they serve a “Coatbridge Negroni”. Made with gin and campari, and substituting the sweet vermouth for Buckfast! It is also so synonymous with the area that it has also been referred to as “Coatbridge Table Wine”. Coatbridge alone is also said to account for 10% of all of Buckfast’s drinks sales.

Buckfast has a very bad image in Scotland. With its high alcohol and caffeine content, it is thought to be associated with violent and disorderly behaviour.

But how is it that a tonic wine made by monks in the South of England, that was originally created with a medicinal function came to have so much popularity among the youth of Lanarkshire?

There have been some suggestions that the popularity of Buckfast in Scotland has something to do with the traditionally Catholic fans of the Scottish football club Celtic FC developing a taste for the stuff as their holy pre-match aperitif in the 1970’s.

There is, however, evidence to suggest that the Scots have had a taste for Buckfast for much longer than that. There are adverts for wine shops in the 1930’s Scottish newspapers where Buckfast is the only drink they bother to mention by name.

Is it possible that the Scots developed a taste for Buckfast because of its supposedly medicinal properties. In 1921, changes in licensing laws meant that alcohol could only be bought between 1130am to 3pm and 530pm to 10pm on weekdays – and not at all on Sundays. But Buckfast was sold at pharmacies as medicine as well as in wine shops, and so could be bought at any time.

Its popularity within the area of Coatbridge comes from the intense physical labour of the industries in Lanarkshire; notably mining. It was sold in drugstores as “mood boosters” to help improve the morale of the labourers. This may explain the extremely high caffeine content as well.

The product has been so widely associated with Scotland that it even appears in an episode of the Simpsons: where Groundskeeps Willie is seen knocking back a bottle of what looks suspiciously like Buckfast.