It has to be said that the curatorial team here are fond of a cup of tea.

Our weekly milk rota means Monday morning is often accompanied by a cry of “I’m just popping out for milk”. The destination of choice is invariably a nearby supermarket on Bank Street, Coatbridge. What some of our unsuspecting colleagues may not realise, though is that they are about to enter… [cue dramatic music] the COATBRIDGE HOLE!

Well not really. It’s a supermarket. However, at one time this spot was literally an enormous hole in the ground, at the bottom of which ran an ancient waterway much older than the town: the Luggie Burn.

For a century from the mid-1800s Coatbridge was one of the most densely industrialised towns anywhere. By 1900 barely a scrap of land had escaped development either for industry or for the homes of those who worked in the ironworks, foundries, engineering works and collieries that polluted the air just as they filled the ground. This constant push for land literally changed the geography of Coatbridge. While coal mines and ironworks built their own artificial hills of industrial waste so too old waterways were buried, disappearing from sight.

However, if you know where to look these historic streams sometimes reappear in unexpected places.

I thought it would be fun to explore some of these nooks that offer little glimpses into the past. Our guide will be, at least in part, the National Library of Scotland’s superb online mapping tool.

The Coatbridge Hole as seen on the 1859 1st edition Ordnance Survey map (courtesy of the National Libraries of Scotland).

The name Luggie may be a reference to a large pail used for milking so it seems a fitting place for thirsty curators to go in search of dairy. From here we can take in a panoramic view of the now-filled bed of the Monkland Canal and the mighty railway bridges that span it.

A postcard view looking north across the Monkland Canal, taken from the bridge that carried the North British Railway over the canal. The railway yard on the site of the Coatbridge Hole is off camera just to the photographer’s left. Partly obscured by the footbridge you can see the entrance to the Gartsherrie Branch of the canal.

The entrance to the Gartsherrie Cut of the Monkland Canal from the former canal basin, visible in the postcard view above. May 2019.

We are also close to the site of the long-disappeared bridge that gave Coatbridge its name and which spanned the Luggie Burn. The same obstacle faced the famous Scots engineer James Watt when his Monkland Canal arrived here in the early 1770s. At this point the canal actually lies on an aqueduct over the top of the burn (the original aqueduct collapsed in 1858 and had to be rebuilt. Watt was clearly in a hurry). So here we have railways above roads, above the canal, above the little Luggie Burn. Layers of history in cross-section. However the old waterways were not just obstacles, they also sometimes revealed the geology of a place. This was important during the early industrial period when mine surveying was in its infancy and sinking a coal or ironstone mine was often quite a speculative venture. Surveyors would study river banks for signs of exposed seams of coal or ironstone.

Over on the other side of the canal basin the Luggie was fed by the Gartsherrie Burn. This too began to be culverted when its line was used for the Gartsherrie Branch of the Canal. The canal branch was originally dug to serve coal mines but before it was completed new ironworks had been built by its side, giving the waterway a new purpose (not to mention new income).

Summerlee Iron Works from the South, showing the older Gartsherrie Burn (centre foreground) alongside a branch of the Monkland Canal.

The Gartsherrie Burn ran directly beneath the Summerlee Iron Works which was built in 1836. For many years the watercourse reappeared from underground in the middle of the works before disappearing back into tunnels.

Summerlee Iron Works, 1859 OS map. You can see a short stretch of the Gartsherrie Burn survives at ground level beside the canal in the centre of the image.

By the 1890s though, this little section was culverted too. It is still there, though and if you stand in the right spot by the canal you can hear the rushing water several metres below ground.

Summerlee Iron Works, 1897 OS map. By now the stretch of the Gartsherrie Burn inside the angle of the canal branch has disappeared.

The Coatbridge Hole too fell victim to the pressure for land and was filled-in in the early 1870s to allow construction of a viaduct to raise up the North British Railway. This eliminated a dangerous level crossing at a time when the railways were rapidly getting busier. The rest of the filled-in Hole was taken up by a railway goods station. 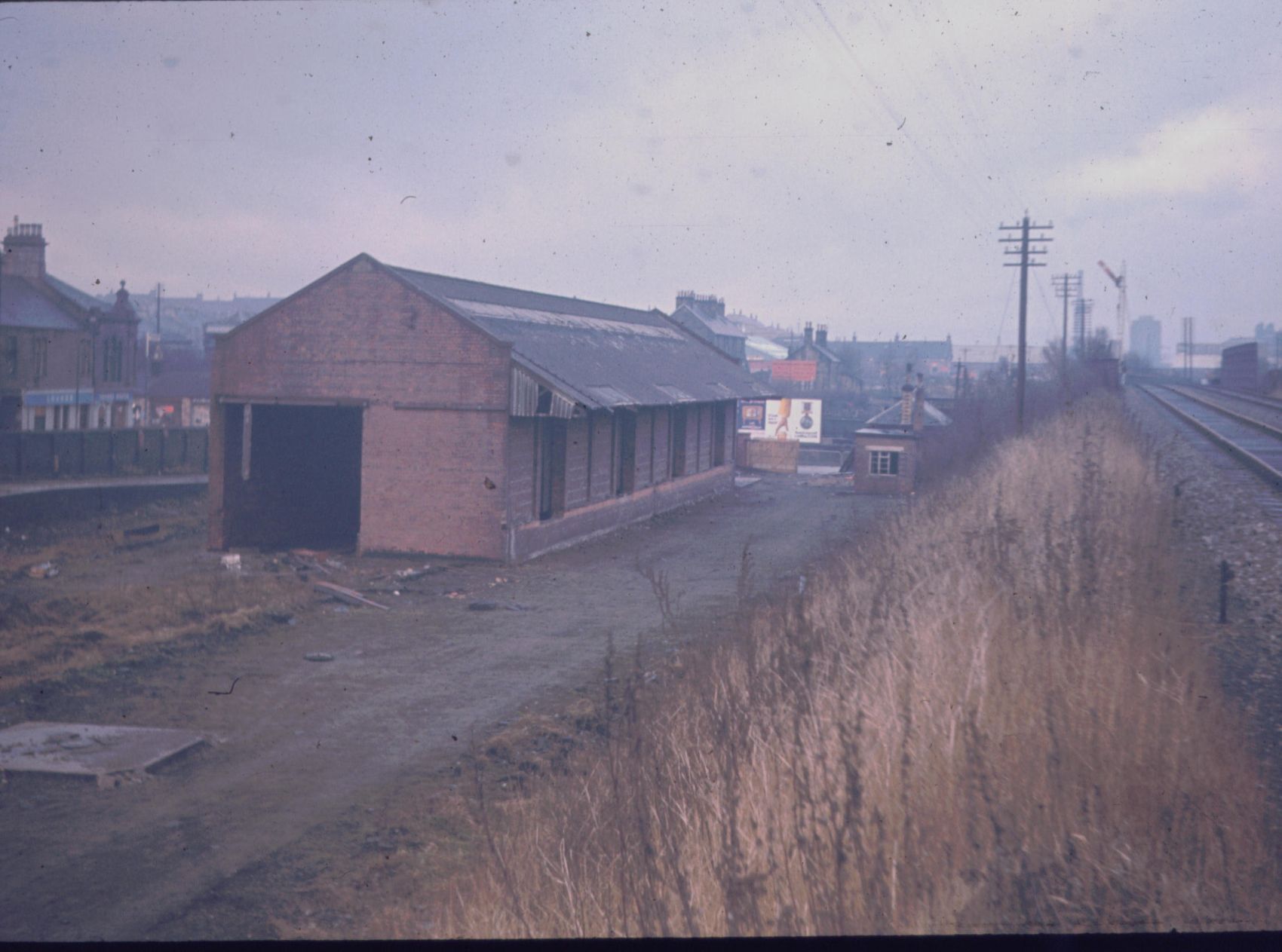 Remains of a railway goods station platform in the supermarket car park on the site of the Coatbridge Hole. May 2019.

We catch a brief glimpse of the Luggie Burn nearby where it emerges from the Hole and runs along the boundary of the old Coatbridge Mines Rescue Station. Here it had to go underneath both the Monkland Canal (again) and it’s Dundyvan Branch which served another ironworks.

The short open stretch of the Luggie Burn beside the South Circular Road, looking back towards the site of the Coatbridge Hole, May 2019.

The burn then disappears underground again before doubling back on itself and reappearing at Dundyvan.

Despite being hidden for most of its course, the old waterway is still an important part of the drainage system. From here it heads west to join the Calder Water, which in turn runs into the River Clyde and to the sea.

Justin Parkes has been Industrial History Curator for CultureNL since 2008.

Russian solidarity in Airdrie and Coatbridge during the Second World War: the Leningrad Album in context

Glitz and Glamour: Curating an Exhibition from Home