The Summerlee Transport Group (STG) was formed in 1988 to primarily support the operation of the trams and tramway at Summerlee Museum. The STG became a charity in Scotland in 1992 (SC020158).

History of the Summerlee Tramway 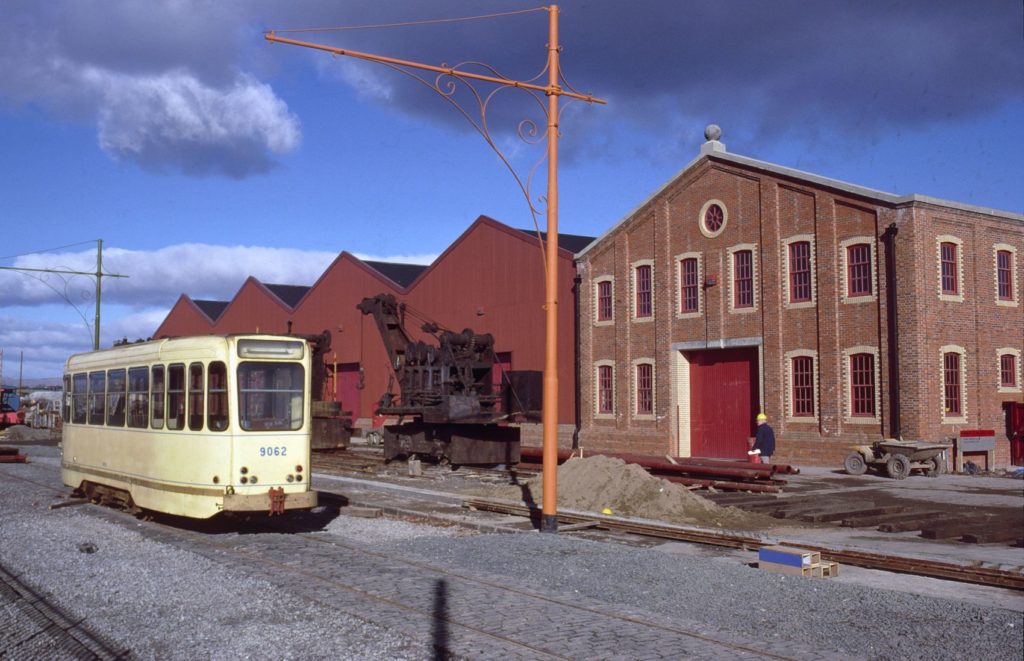 Brussels 9062 after arriving at Summerlee January 1988.

The Summerlee Tramway was planned in 1986/1987 with the first section of track (main entrance to Sawmill) opened in March 1988 with the first passenger tram to run at Summerlee (Brussels 9062).

The first Scottish tram Summerlee acquired was Lanarkshire 53 in 1986 which was sent to Bo’ness and Kinneil Railway as part of a 1980’s Youth employment scheme, for restoration of the main body. The body arrived at Summerlee in March 1988 for completion and the second section of track opened in late 1988/early 1989.

Summerlee’s second operating tram was Graz 225 arriving in May 1989, both 9062 and 225 were planned to fill a gap in the tram service until 53 was launched into service and for use in the wet weather.

The next tram to arrive was Glasgow 1017 in early 1992 and Oporto 150 in the summer of the same year (acquired for truck and controllers for 53). Lanarkshire 53 was launched in to passenger service on the 1st April 1995 by Helen Liddell (MP For Monklands East).

In December 1999 The Summerlee Transport Group bought Dusseldorf 392 for 1DM (about 35p) so that a wheelchair lift could be fitted, allowing passengers with mobility problems to have a ride on Scotland’s only working heritage Tramway.

On the 11th September 2001 Princess Anne visited Summerlee and was offered a go at driving 53, something that she was said to be excited to do. In the summer of 2002 Glasgow 1245 arrived from Blackpool (1245 is now under restoration). Glasgow 1017 was launched into Passenger service on the 1 December 2003. 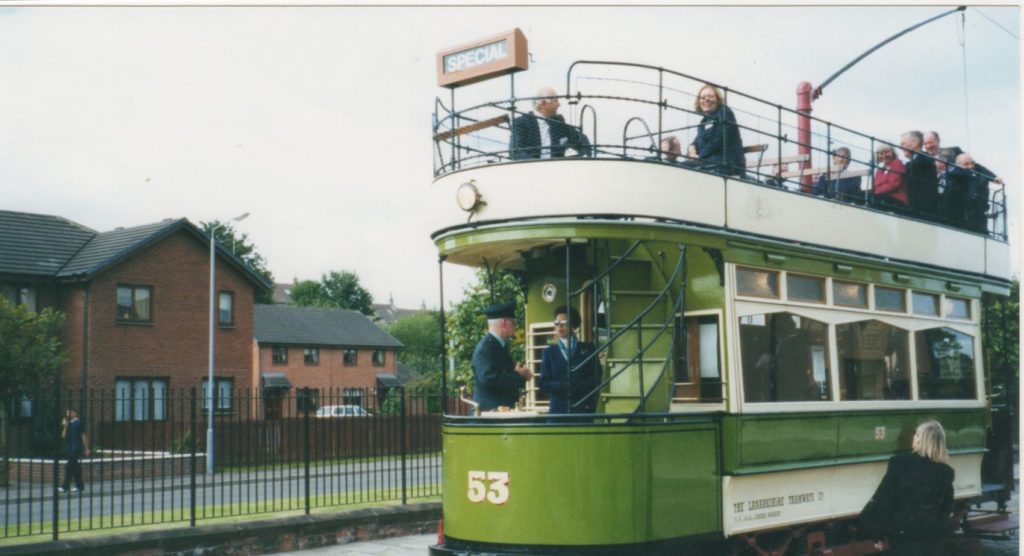 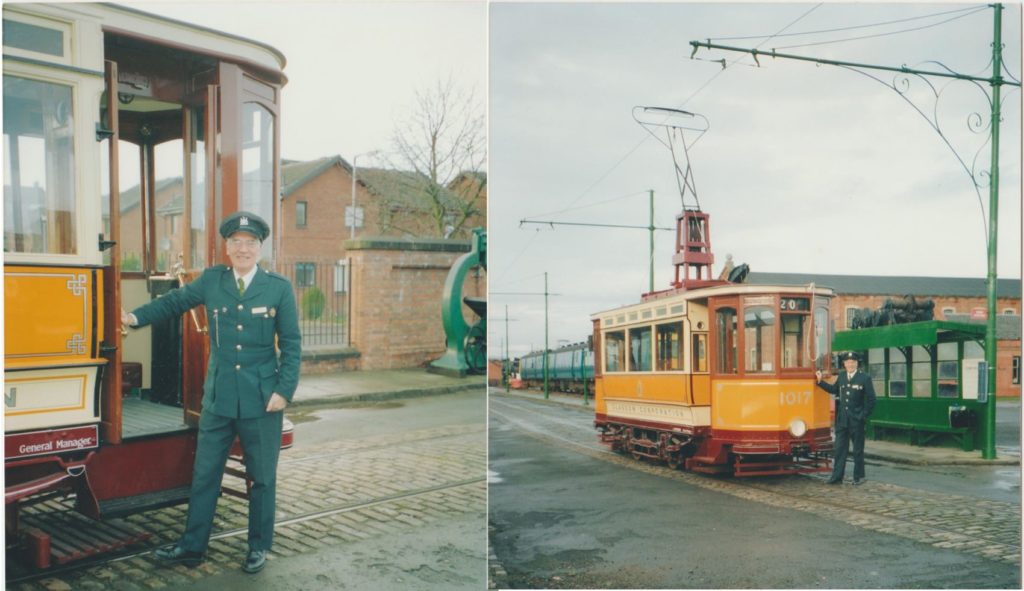 On the 14th September 2004 trams 9062 and 392 suffered an attack of vandalism. Due to this and with some major defects on 9062 this tram was scrapped. By this point 225 was used for most of the passenger service until October 2006 when Summerlee closed for redevelopment. 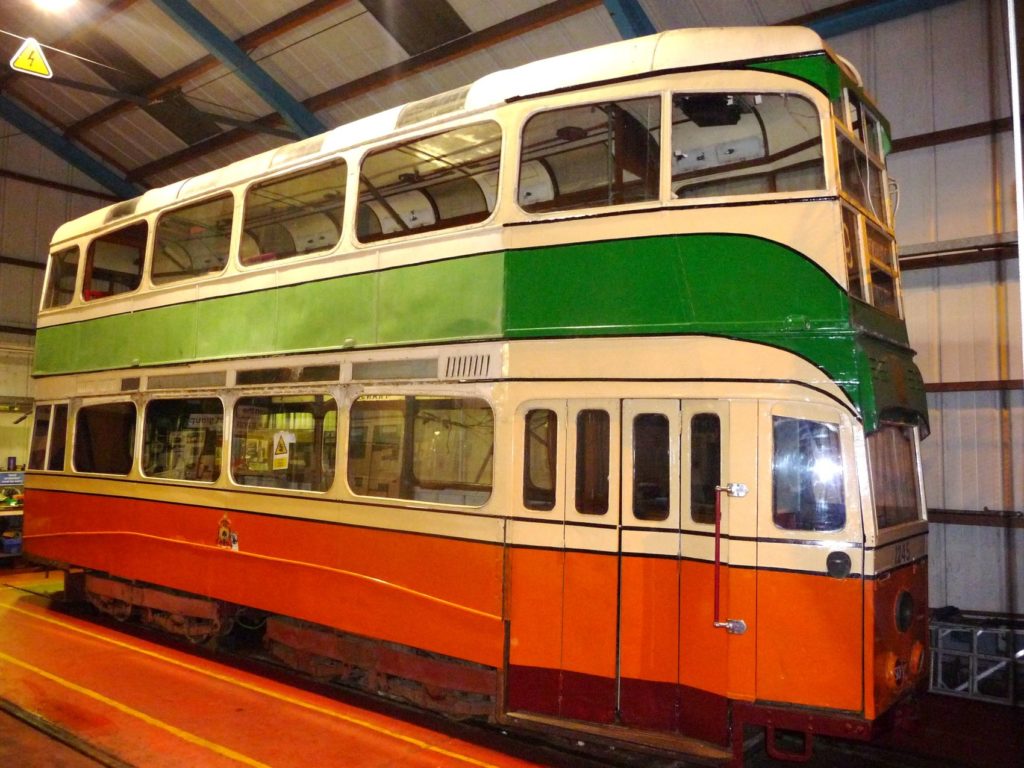 The museum acquired the Glasgow 1245 Coronation tram in 2002 from it’s stored location of Rigby Road, Blackpool. During its time at Summerlee until 2011 various schemes of preservation of the tram were considered which eventually concluded in a decision to restore it to working order. Once this decision was taken a plan of action and a list of identified priorities were agreed.

The first priority was to undertake a thorough survey of the tram bodywork and underframe. The two bogie units were removed to the museum’s main workshop for full frame and motor overhaul. Whilst this was being undertaken the jacked-up body was cleaned and freed from rust and corroded metal and glass.

Once the two bogies were completed the body was separated and the lower half transported to the workshop for further body and underframe restoration. Once the lower part of the body was completed the upper deck was transported to the museum workshop. And placed on top of the lower section. Once this was achieved a wide range of other restoration work to the tram commenced. These included restoration of the upper deck, lighting and wiring, floor covering, seats, body, interior panels and both sets of stairways.

In the lower deck the Drivers controls, resistor box and selector switches were all either restored or replaced. Unfortunately, all work on the tram paused in 2020 due to the impact of the Covid-19 Pandemic. This will have an impact on the restoration work for the foreseeable future. More info on 1245 at www.glasgowslasttram.net 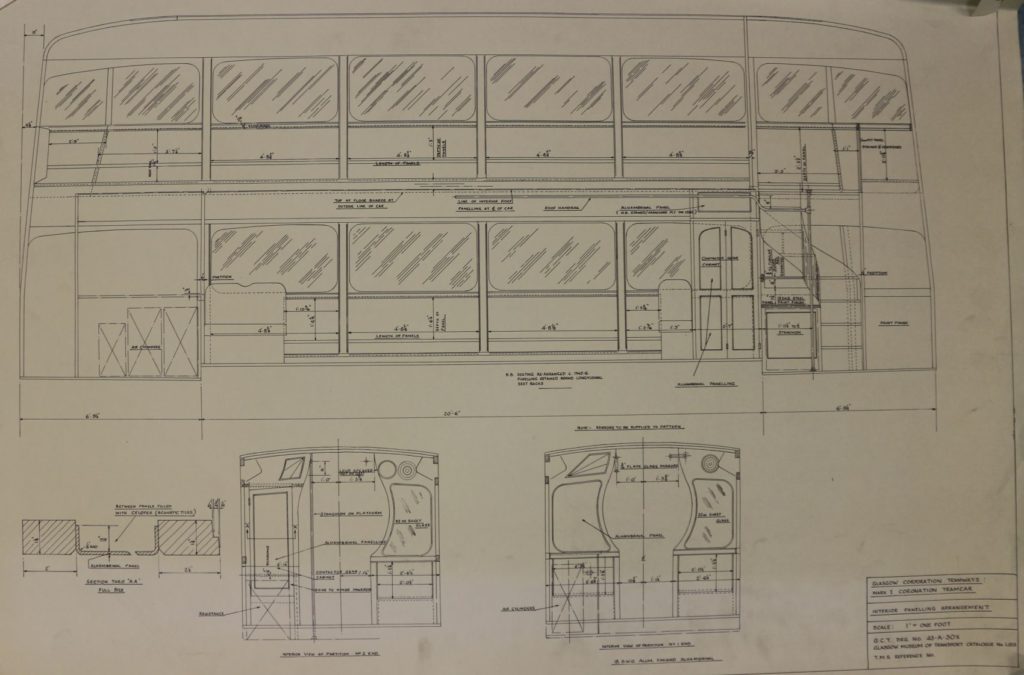 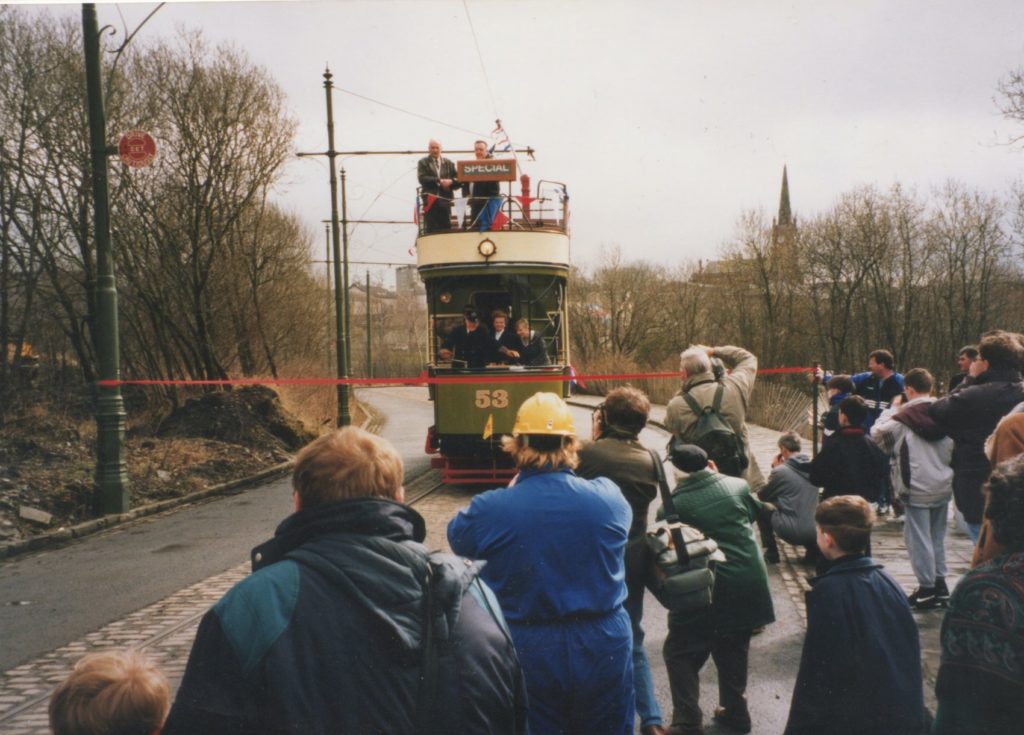 The restoration of Lanarkshire 53 started in 1986 at the Bo’ness and Kinneil Railway to restore the woodwork on the main body. In 1988 the body arrived at Summerlee along with Oporto 150 for it’s truck and control equipment. All the seats, barriers, stairs and the rest of the metalwork were made at Summerlee. Testing began on 53 in late 1993 and was launched into passenger service in April 1995 – More info on 53 at www.summerleetg.co.uk/l53 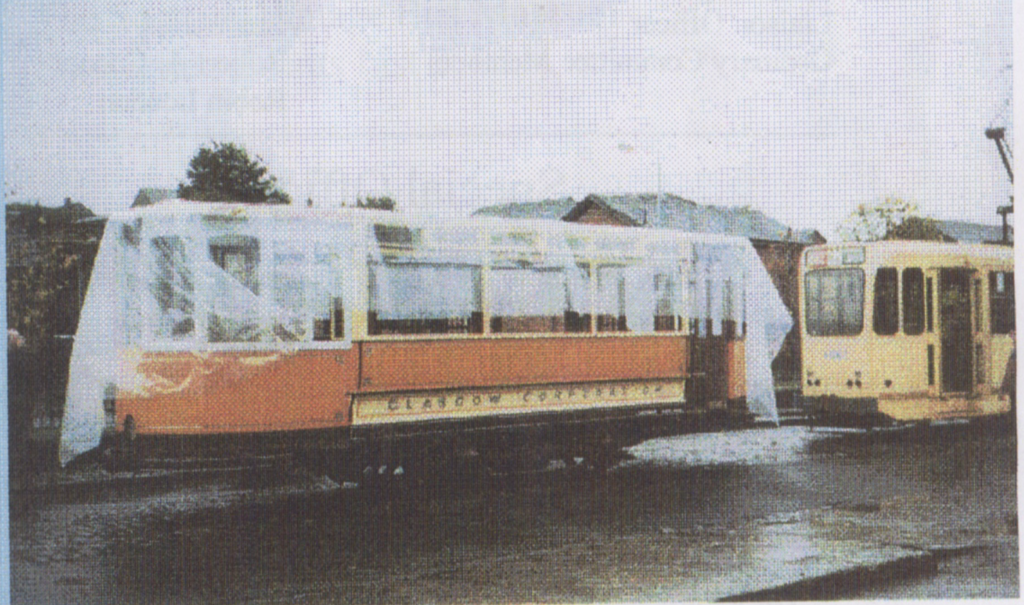 Glasgow 1017 arrived at Summerlee from a garden in Cambuslang. One of the first tasks was to remove the damaged woodwork. The truck for 1017 came from Lisbon and needed to be re-sized to fit on the Summerlee Tramway. The seats were made by Anniesland College. 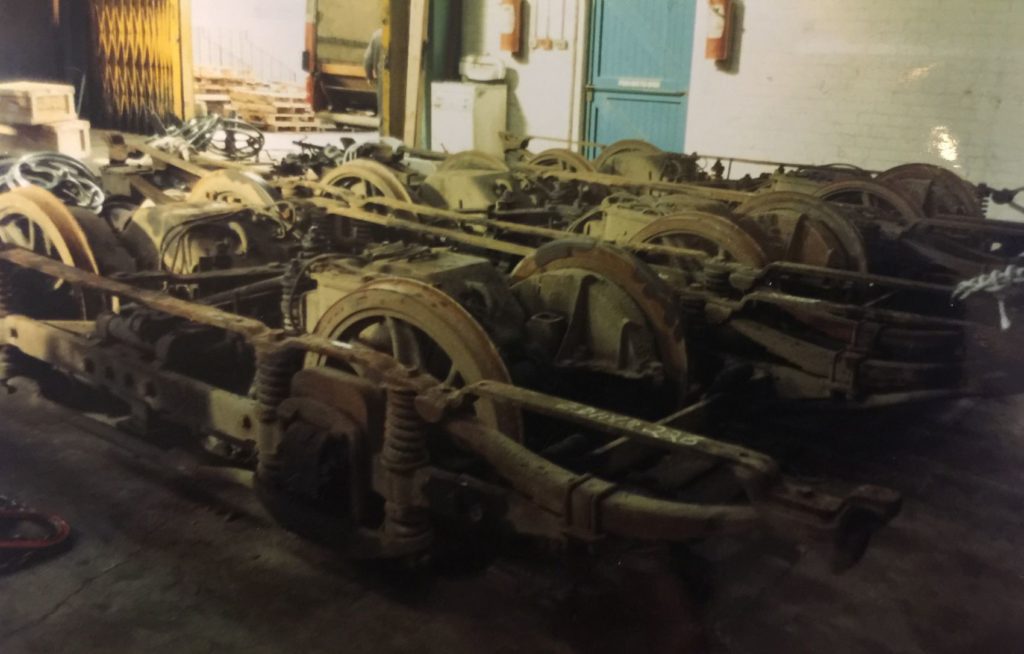 1017 truck after arriving from Lisbon in Bay 5 (now the Industrial History Store) in the main Exhibition Hall at Summerlee Museum.

For many years the group’s main form of communication was via its own magazine, The Trolley. In the days before digital media and social networks the printed copies would be distributed to members twice a year. This, along with the annual report kept those members who were unable to attend the group meetings and work nights in touch with what was going on with both the group and the museum.

Since the advent of digital communication and acceptance of social media the group members are kept up to date through their own dedicated website and a variety of social media platforms. Whilst members now have a range of digital media, a paper version of the trolley is still published for those who choose this method.

As one part of the group’s volunteers’ activities in support of the museums tramway the most important is their contribution to the maintenance of the trams and tramway.

The tramway service is governed by the same regulations and operational guidance as any other light railway in the UK. There are some exemptions with regards to Heritage trams, etc, however the need to maintain a safe service is the same.

Underneath Lanarkshire 53: the view of the traction motors.

The group’s volunteers undertake those activities which have been approved by the Heritage Technician. These include the checking and adjustment of moving parts, brakes, overhead power pickups, controllers, etc along with track points cleaning and servicing.

Volunteers are trained to undertake a range of minor servicing tasks and are supervised by the group’s Workshop Coordinator in agreement with the Heritage Technician. A regular work night is organised in which additional duties including cleaning of trams, whilst servicing training and driver and conductor training is given to members. All onsite evening activities are undertaken between April and November each year. In addition, work on the trams and tramway can also be undertaken during the week when the Heritage Technician is on site. Volunteer members should visit the group’s website for future information on how they can support the work of the tramway.

One of the group’s ongoing activities is the cleaning of the trams and tramway track. This is normally undertaken on the work night but if appropriate can be carried out during the week if appropriate supervision and support is available. The group have appointed a Tram Cleaning Co-ordinator to ensure that the activities are carried out to the standards required and will allocate the work to volunteers.

As a separate activity the tramway track has a Tramway and Track Co-ordinator who will ensure the track is cleaned in a safe and efficient manner. As there are occasions when this activity can be undertaken during tram movement. The coordinator is responsible for ensuring volunteers are trained in all safety measures and techniques to ensure that the volunteers work in a safe manner and are not put to any risk. 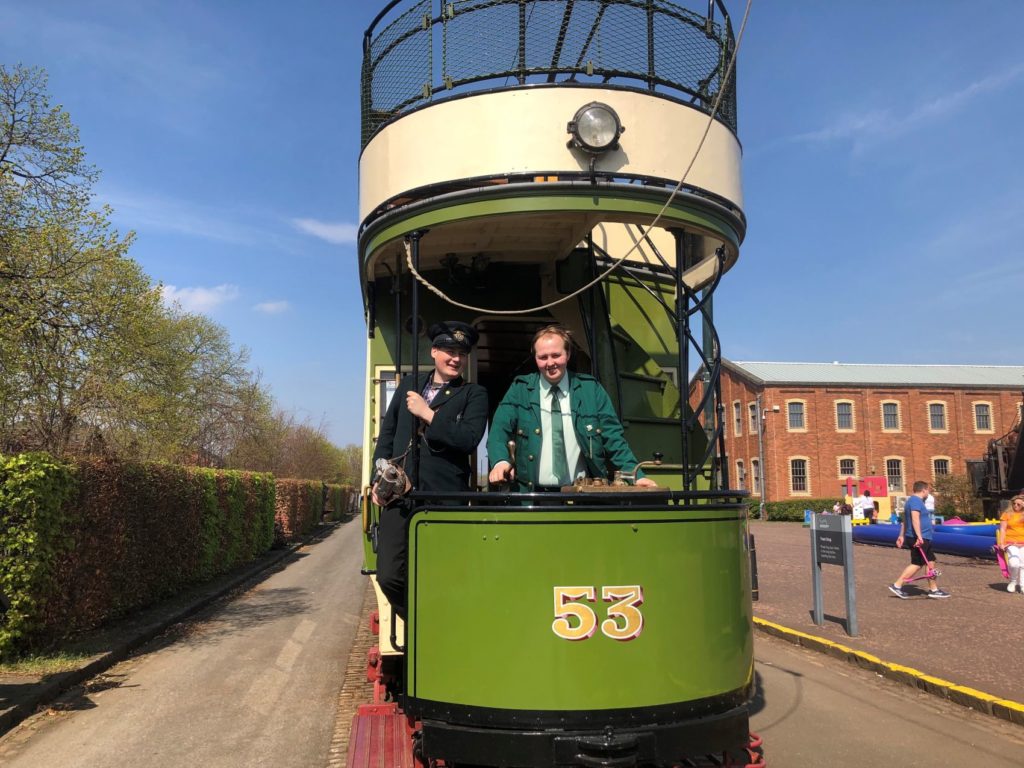 Alistair Mather and James Fraser of our volunteers at the controls of Lanarkshire 53.

An operational tramway is dependent on its ability to train drivers and conductors to provide the passenger service.  In support of this the group provide the main training of crews for the tramway. The group have appointed a Senior Trainer for the driver and a Conductor Trainer for other duties.

Volunteers undertake several weeks of training on all passenger-carrying trams. At the end of each training period, if deemed competent by the Senior Trainer a volunteer can sit a driving test for that tram.

All trams due to their individual operating characteristics require to be passed individually. Prior to sitting any driving test, a separate written test is taken on a range of operational and safety related procedures on driving a tram at Summerlee. Once completed drivers are issued with a licence to drive at Summerlee.

Conductor training is carried out by the Conductor Training Officer. In addition to training in conductor duties volunteers are also trained in basic customer service skills and the history of the tramway, trams in operation and the museum attractions in general. This has been developed from experience of operating the tramway where most visitors using the tram service are looking for information relating to the above. The conductor is generally the person the customer will ask these questions of. Once progress and competence in these areas of instruction have developed the volunteer can sit a test and if successful will be issued with a conductors licence for the tramway at Summerlee.

All activities including training are coordinated by the group Workshop Co-ordinator with the agreement of the Heritage Technician and the Museum Manager.

On work night the supervision of activities are undertaken by the groups Depot Supervisor under the direction of the Workshop Co-ordinator. Each individual activity work or training is the responsibility of the appropriate co-ordinator or trainer dependent on the activities on the evening. 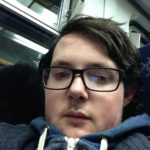 Alexander Craig has been a volunteer for the Summerlee Transport Group Since 2010 and a Visitor Services Assistant at Summerlee Museum since May 2018.