In four years of cataloguing and curating with CultureNL Museums I’ve come across some pretty interesting objects, from the beautiful to the bizarre.

With only a small percentage of the collections on display at any one time, the digitisation project – which for me meant primarily curating objects, and stories around those groups of objects – really allowed me to dig down into different areas of the collection and draw out objects that have had little or no display time before now.

Casting a fresh eye over the museum collections has been really rewarding. Mostly composed of things that have been gifted by ordinary people, each with their own stories – it’s a patchwork quilt of North Lanarkshire’s collective history. I find trying to bring this to an audience is one of the most enjoyable aspects of curatorial work, whether it’s through exhibitions or now this website.

There have been quite a few nice surprises and little stories coming through as well. Here’s just a few of them…

In exploring home life, I tried to pick out the objects that helped tell stories about different aspects of our homes.

One that I had picked out, a child’s high chair, didn’t have a huge amount of information on the object record although we knew it was from a family in Coatbridge. However on sighting it in the store there was something quite appealing about it. Visually it looked pretty good, so I wanted to find out more. 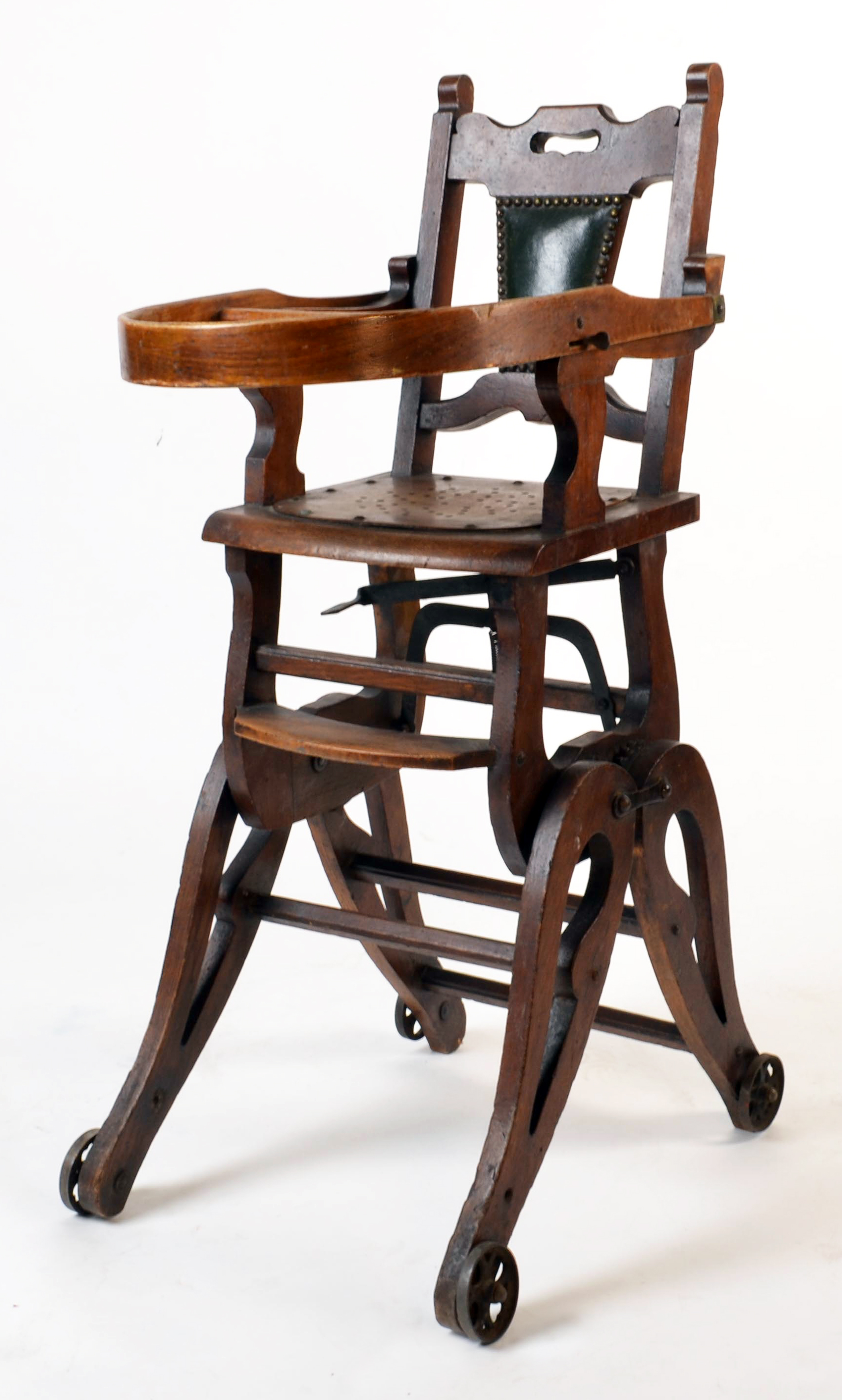 It had never been photographed and there was little information on it in our database. When I wheeled it into the studio I thought again how unusual the legs looked. Was this a case of extravagant Victorian over-engineering?

There seemed to be a spring under it. Spring-loaded suspension for a particularly raucous baby? Seems ridiculous, but I suppose they did have a certain flamboyance for even the most mundane of things back then. Or so I thought.

Once photographed I started using the photos to see if the style would date it to a particular period, or give clues on the manufacturer. Whilst there was a whole load of Victorian high chairs with predictably straight legs, there were a certain number that had very different seats but similar outwards-curving legs.

They all had one thing in common – the legs can be folded up to create a rocking chair. Ahhh. What a great piece of practical furniture design, especially for families that had the space limitations of a one- or two-roomed home: a two-in-one chair.

Having said that, we’ll need to have another photography session with it in rocking mode.

Home and the Range

Another object that had a bit of an interesting surprise to it was the kitchen range which is in the 1910s Cottage at Summerlee. On preparing to write about home life I was flicking through our research folders and came across a set of colour photos of a house that was something of a faded time capsule. They were labelled as Flloyd St, Coatbridge, which is just a few streets over from Summerlee Museum and our Curatorial Office.

The photos, dated 1992, showed the interior of a room-and-kitchen flat with pretty original-looking (and quite stained) lino, wallpaper and dark wood skirting boards, floors and doors. An indoor toilet was nowhere to be seen. Was this Coatbridge’s answer to the Tenement House?

The front room of 14 Flloyd St, Coatbridge, as it was prior to renovation in 1993.

One of the photos, showing the kitchen range in situ, was alongside a letter describing the transfer of the range to the museum when the 1895-1905 dated flat was being renovated in 1993.

Also included was a photographic contact sheet which showed curatorial staff removing the range in March 1993.

Photo, from contact sheet, showing the removal of kitchen range from 14 Flloyd St.

On the letter someone had written the record number of the range that matched that in the 1910s Cottage. Now it all made sense. 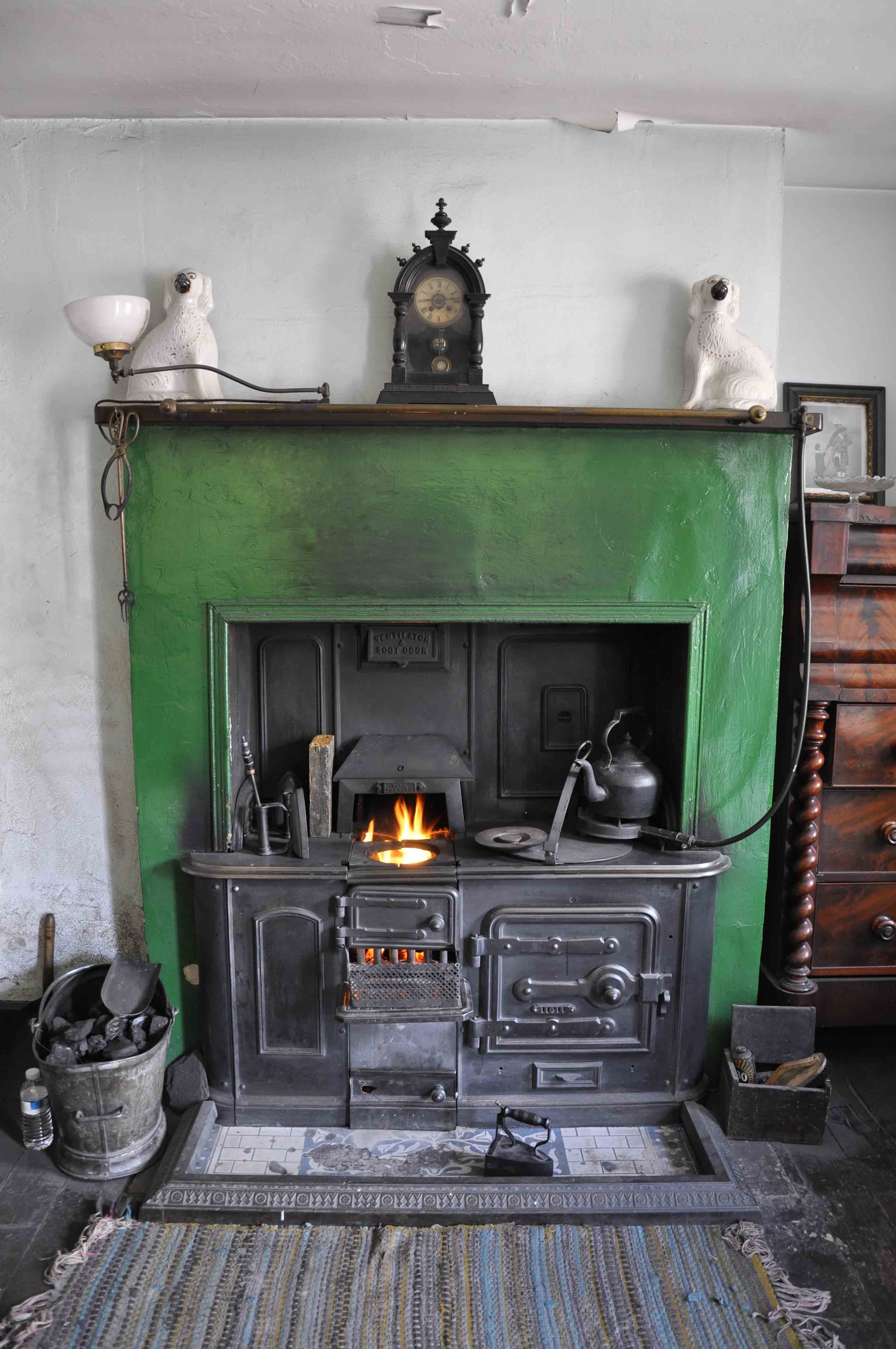 Here were photos showing the origin story of one of our collections objects. The fact that it came from a time-travelling flat that was next door to Summerlee made it all the sweeter.

Another area of the museum collections that is fantastically diverse is the coal mining collection. Whilst I’ve long had an interest in the industries of Lanarkshire, coal mining objects were not something I had looked at very deeply until I was charged with curating our Pits & Ponies exhibition in 2018.

Lanarkshire was Scotland’s most developed coalfield in the Industrial Revolution, and we tend to forget deep mining only stopped here in the early 1980s – and opencast mining in the 2010s. As a result not only is there a fantastic range of mining objects in the collection, but the industry still has a huge personal significance to a lot of people locally – either to the many former miners in the area or their families and friends.

One of the most prominent mining objects on display at Summerlee is a large hand-painted banner from the Wester Auchengeich Colliery National Union of Mineworkers (NUM) branch. This dates to around the time of nationalisation of the industry in 1946. 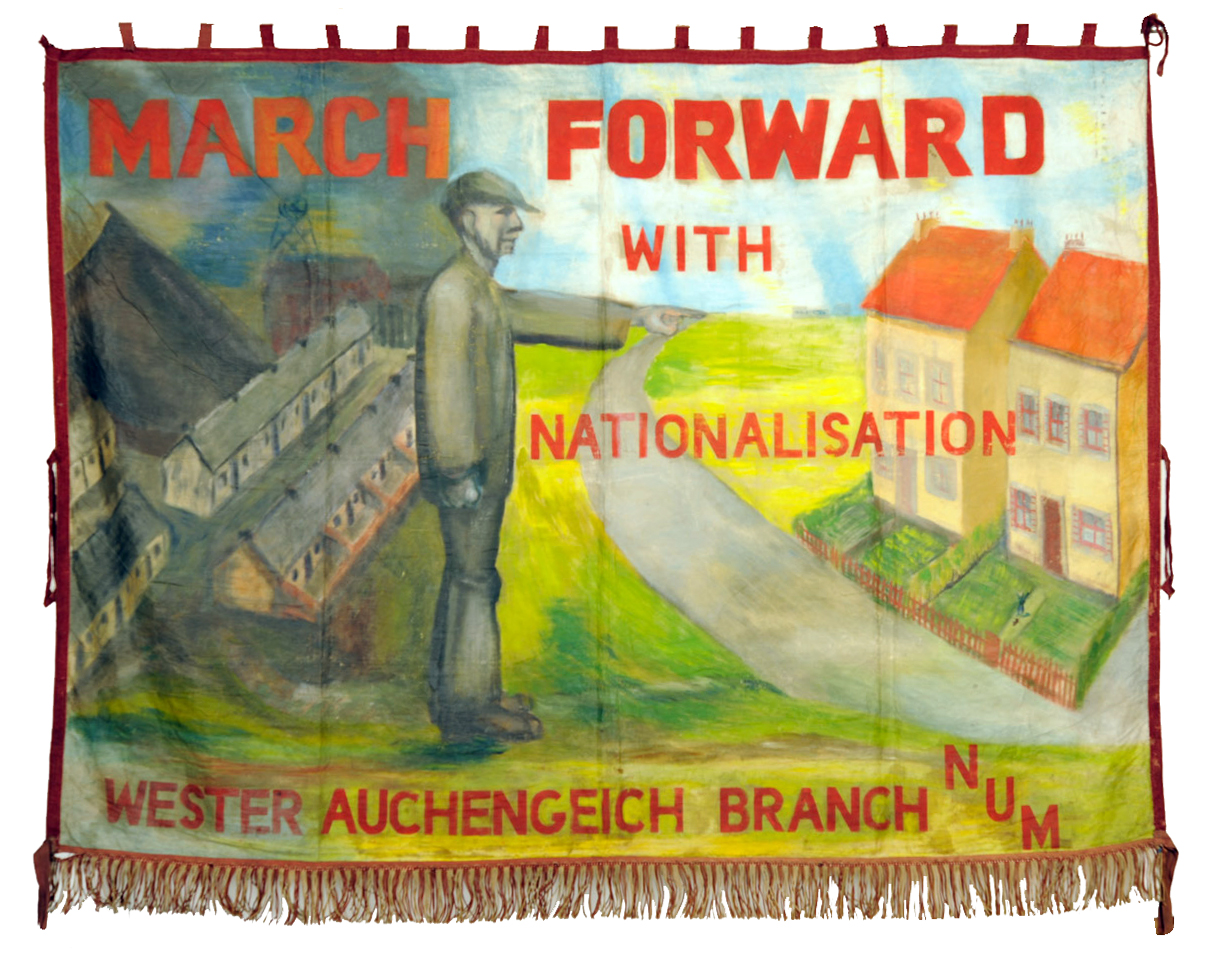 The banner depicts a miner pointing to the future that is hoped for after nationalisation, away from the gloomy run-down raws built by the coalmasters toward modern homes and civilised treatment by their new employers.

When we took it out of the case for photography I had no idea there was a design on the reverse side, so I wasn’t at all prepared for the striking image of a miner at work with the brilliantly bold slogan “END EXPLOITATION WITH SOCIALISM”.

The Wester Auchengeich miners’ banner being photographed in the studio

Both sides of the banner embody the struggles that Lanarkshire miners in the 1940s and many before them had faced – as well as their hope that, because of their collective action, the lives of their communities were at last going to be radically improved. It’s a rousing hope, and an inspiring story too. Many things did get better for them, even if we know now that the industry did not have much time left.

In the present day, an era characterised by precarious low-paid work for many people – particularly in de-industrialised areas like North Lanarkshire – there’s a lot of inspiration to be taken from this fighting spirit of the Lanarkshire miners.

Michael Allan has been the Assistant Curator with CultureNL Museums since 2015.