Hearing loss and deafness has always been part of global civilisation. Here, we take a short journey through time to explore the development of hearing aids.

The most primitive devices designed to aid hearing were hollowed-out animal horns. It is not known how long ago this discovery was made but safe to say it was several centuries before genuinely effective hearing aids became available.

From the seventeenth century, the ear trumpet was a solution of sorts for hearing loss. Rather than amplifying sound, ear trumpets (like horns) simply funnelled it into the ear through a narrow tube. They were commercially produced in the UK from around 1800 and were fairly widely used by the late eighteenth century. In the pre-electrical era, basic devices such as this Victorian collapsible tin ear trumpet made by Atkinson of Holborn, London were as good as it got for the partially deaf.

Ear trumpets were also designed for medical purposes. The wooden example below is a type of stethoscope, known as a Pinard horn, invented in the nineteenth century by French obstetrician Dr Adolphe Pinard (1844–1944). Similar acoustic devices are still used today by midwives, doctors and nurses. 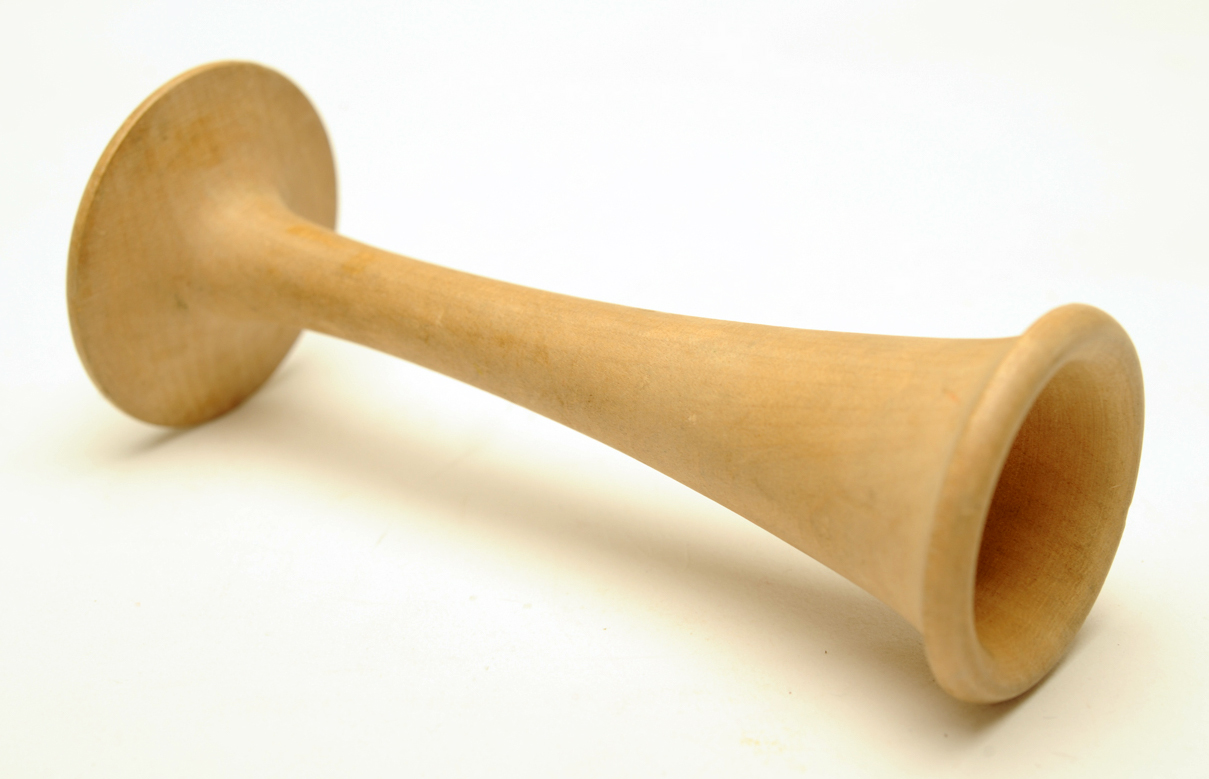 The invention of the telephone in the 1870s paved the way for electronic hearing aids. The Akouphone was developed in the mid-1890s by an American electrical engineer called Miller Reese Hutchison (1876–1944). Regarded as the first electric hearing aid, it used a carbon transmitter to strengthen a weak sound using an electric current. By 1902, Hutchison had developed a more portable battery-operated version, named the Acousticon.

Carbon transmitter devices had a limited frequency range and did not help people with total or profound hearing loss but they did amplify sound for those with partial hearing. In 1913 Siemens became one of the first companies to begin mass producing electronically amplified hearing aids.

The next major development came in the 1920s with vacuum-tube hearing aids. These were lighter than their predecessors and controlled the flow of electricity more effectively than carbon, but were not capable of filtering sounds during the amplification process. The first version, called the Vactuphone, was patented in 1920 by Earl Hanson, a naval engineer. By 1923 vacuum-tube hearing aids were being marketed by large companies such as Marconi and Western Electric.

Wearable hearing aids with an earpiece, wire and receiver that could be clipped to clothing were available to the public from the late 1930s, but bulky battery packs were still a big drawback for some models.

Advances in military technology during the Second World War brought the next wave of hearing devices. Vacuum tubes were replaced by transistor technology, which required less battery power. Combining this development with the concept of miniaturisation meant that discreet one-piece, pocket-sized hearing aids were available from the late 1940s. However, the transistors were easily damaged by dampness created by body heat and, without the addition of coating, often only lasted a few weeks.

There is also a train of thought that ‘hidden’ hearing aids were more about reducing the discomfort of the general public when confronted with disability than a genuine attempt to break down societal barriers encountered by the wearer.

Silicon transistors were introduced in the mid-1950s. These were more effective but integrated circuit (micro chip) technology had superseded the transistor by the 1960s. Although hearing aids didn’t change very much over the next decade or two, important research into digital processing was taking place.

The creation of the microprocessor in the 1970s finally gave manufacturers the technology to design digital hearing aids small enough to be practical. Hybrid digital-analogue devices were introduced in the 1980s and used until fully digital models came onto the market in the mid to late 1990s.

By the turn of the millennium, improved digital capabilities meant that, for the first time, hearing aids could be programmed and customised to suit individual needs. Modern hearing aids are also able to connect to other electronic devices and adapt to different environments, including public spaces and events.

The development of hearing aids through the ages has undoubtedly improved access for people with hearing disabilities but sadly there is still some way to go in order to realise deafscotand’s vision of “a society where deaf people have equal access, rights and citizenship.”

Minutes for the Airdrie Branch of the British Association of the Hard-of-Hearing are held by North Lanarkshire Archives. The club was formed at a meeting in Airdrie Public Library on 14th September 1964 and was still in
existence in 1983. It held regular meetings, activities including lip-reading for members.