The Pavilion (later Gaumont) on Brandon Street opened as a variety theatre around 1900. It became a cinema in 1913 under the ownership of Motherwell businessman Thomas Ormiston, who was also president of the Cinematograph Exhibitors’ Association. The Pavilion was sold to Gaumont in 1928, although it retained its name until February 1952. The Gaumont Cinema closed in 1959 at became the Majestic Ballroom. The building was destroyed by fire in 1963 and the site was cleared three years later, becoming a carpark for the adjacent Odeon. 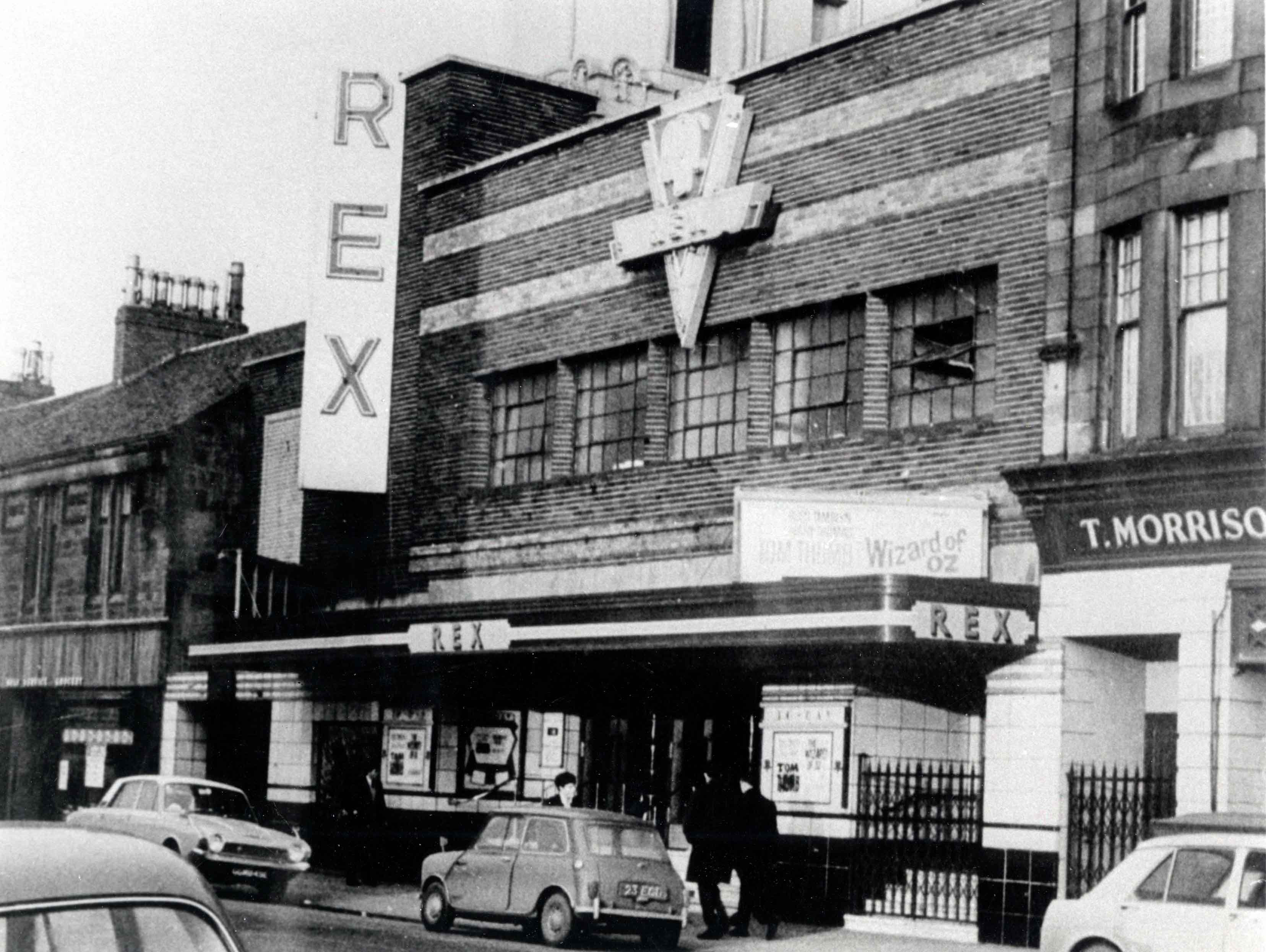 The New Century Theatre (later the Rex) had also opened by 1902, boasting the largest stage in Europe. It was renamed Motherwell Theatre in 1913 and showed silent films accompanied by a pianist. It returned to its original name in 1915 but continued to show films until it closed for refurbishment in 1933. The building, now part of the ABC circuit, reopened as the Rex Cinema in 1936, retaining the original façade and seating 2,031. The cinema finally closed in 1976 and was used for amusements and then a nightclub before being demolished in 1995.

Bellshill Theatre opened in the town’s Main Street around 1904 and was converted for cinema by the Motherwell-based Thomas Ormiston circuit in 1911. It was later renamed the Picture House but continued to be known locally as “the Theatre” until its closure in 1958. For the thirty years prior to its closure the cinema was run by Denman Picture Houses, a subsidiary of Gaumont British. More recently, the frontage was demolished and the building became a market.

The Pavilion Theatre (later the Regal) at Mossend Cross opened as a cine-variety theatre in 1912 and became a full-time cinema later that decade. In 1937 the cinema was bought by Glasgow businessman George Palmer, who renovated the building and renamed it the Regal. It was destroyed by an overnight fire in 1946.

The Pavilion (later the Plaza) on Belhaven Terrace opened in the former town hall in 1912. It seated 1,074 and was leased to E.H. Bostock for cine-variety shows. By the end of the decade it was used solely for cinema and was renamed the Plaza. It was taken over by ABC in 1927 but closed suddenly in 1956, having been declared unsafe due to mining subsidence. Demolition followed. 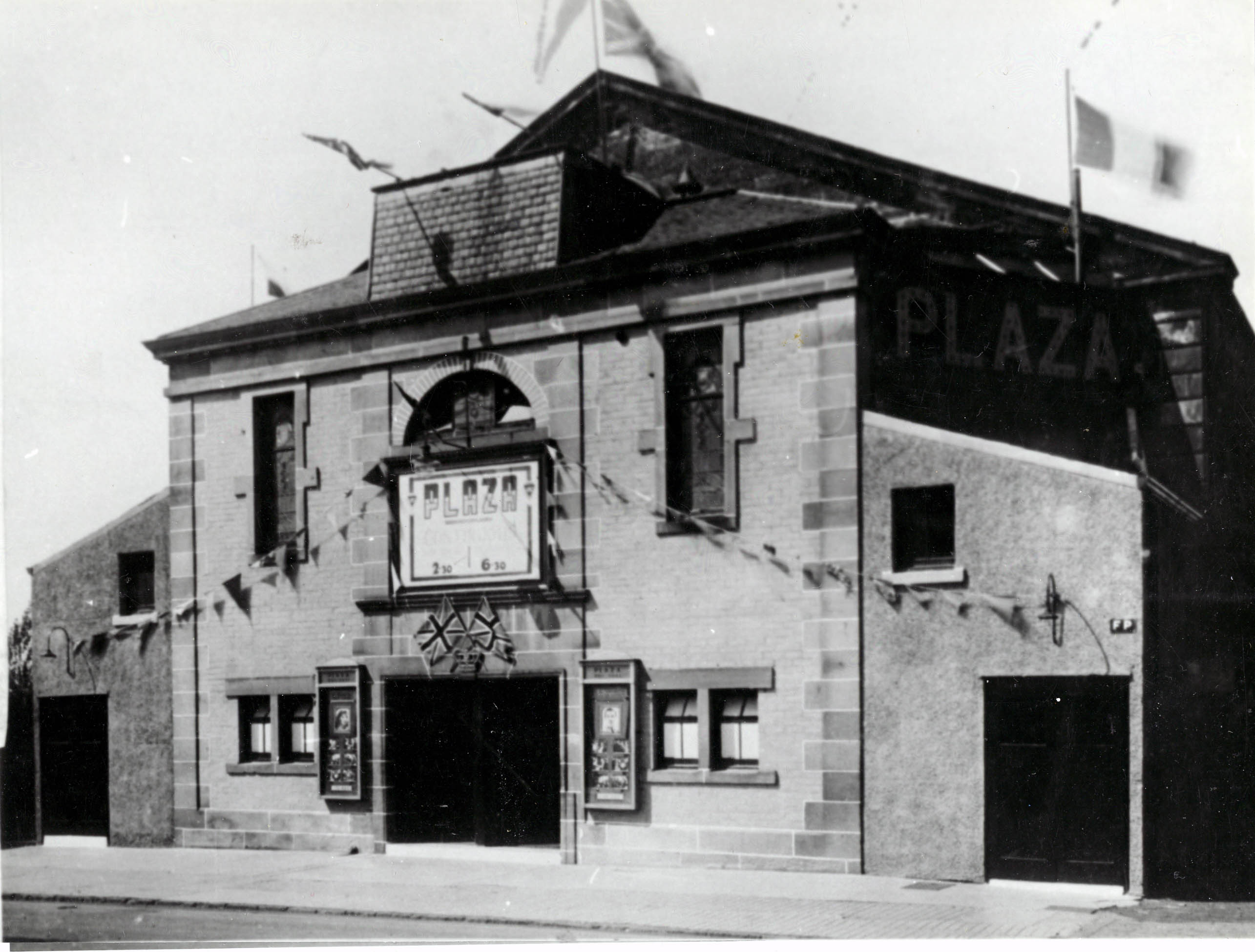 The Empire Cinema opened in a former music hall in 1912. Situated on Station Road, it was run by a local firm in which the Marzella family, proprietors of a nearby café, were major shareholders. The cinema closed in 1960 and was sold to Top Flight bingo club. The building later became part of a factory and as eventually demolished around 2002. 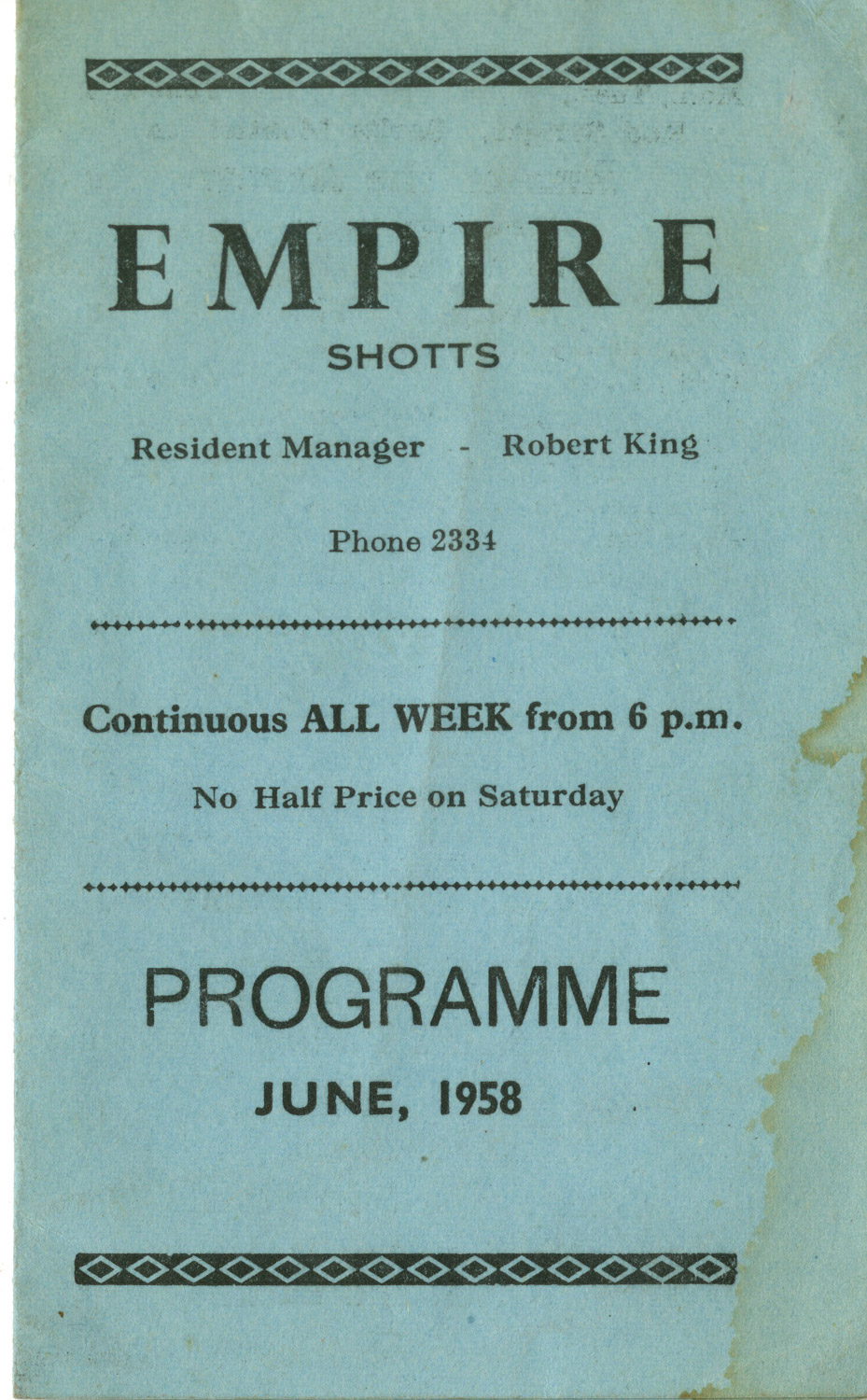 The Hippodrome Variety Theatre (later the Rialto) opened in the former Corn Exchange Hall on Hallcraig Street around 1913 or 1914. Amongst the acts who performed at the Hippodrome were Scottish showman, stage magician and hypnotist Walford Bodie (1869 – 1939) and Harry Houdini (1874 – 1926), who in 1913 performed his escapology routine to thousands on the front steps of the theatre! The Hippodrome became a cinema during the First World War and continued to advertise cine-variety performances after 1929, when it was renamed the Rialto. It became a bingo hall in the 1960s. 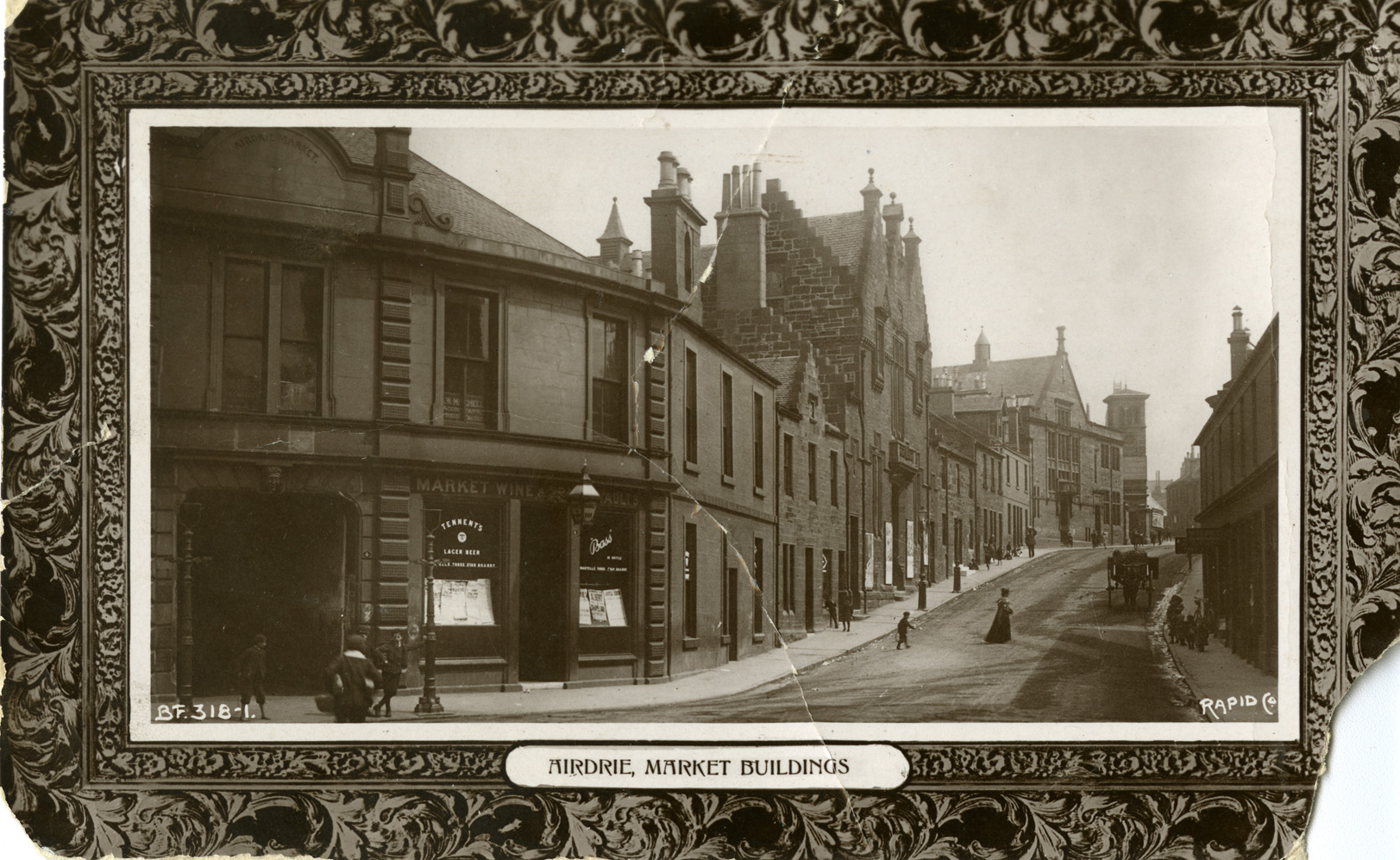 The Theatre Royal on Main Street opened as a live theatre and opera house in 1875, seating 2,000 people. The ornate décor featured ceiling frescoes of renowned writers like Shakespeare, Sir Walter Scott, Robert Burns and Goethe. The theatre was sold in 1907 and switched to variety acts. It expanded into cine-variety in 1919 and finally became a full-time cinema in 1938. The Theatre Royal was sold to Green’s in 1956 but closed in August 1958. The building was largely unaltered since the nineteenth century and unsuitable as a modern cinema. The building lay derelict until it was demolished when the road was widened in 1966.

Also in Main Street, the Empire (later Odeon) had opened as a live theatre just before the First World War. It was taken over for cinema by Airdrie-born film distributor Richard Singleton around 1920 and sold to Odeon in 1936, when it was renamed. During the 1950s to the 1970s the Odeon Coatbridge was managed by Lily Watt, elder sister of entertainment duo Fran and Anna. The cinema closed in September 1976 and was demolished to make way for new shops. 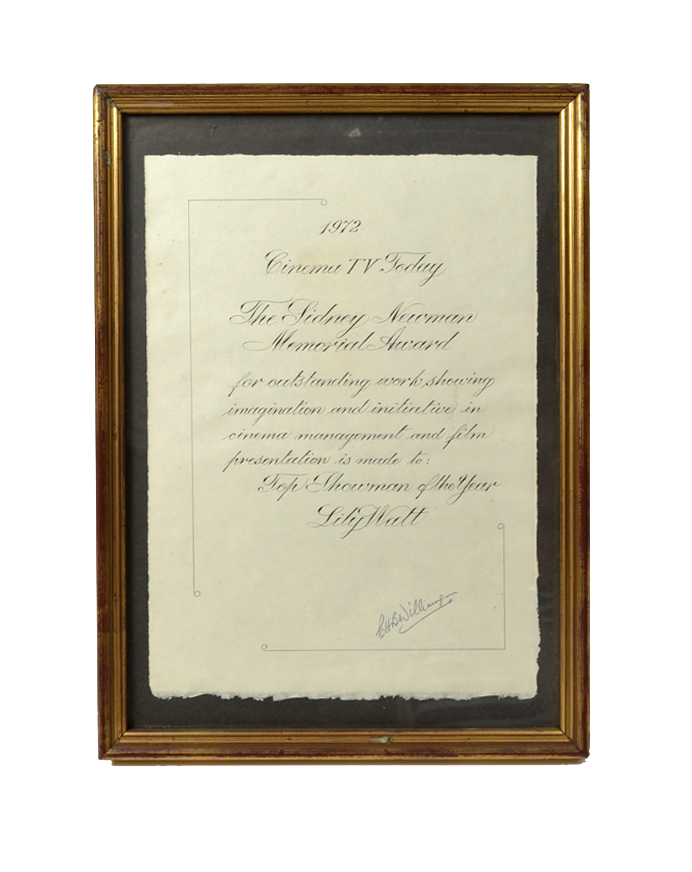 In nearby Water Street the Coatbridge Picture House was opened by J.J. Bennell in the former Bijou Theatre, around 1915. Also known as the BB Picture House (or BB’s) it was commonly referred to by locals as “the British Bughouse” although the initials actually stood for “Bright & Beautiful”. The three pence entry fee gave rise to “the Thrupenny Rush”! Bennell sold the Picture House to Gaumont around 1928. The cinema closed its doors for the last time in 1956.