The Colzium Lennox Estate was gifted to the town of Kilsyth in 1937. Situated amid beautiful grounds boasting historic features and buildings, a curling pond and walled garden with rare plant species, Colzium House is today category B listed. The grounds are used for public recreation, while the house is available for conferences, wedding receptions and other civic functions.

Records relating to Colzium date back to the early thirteenth century, when the land was part of the Kilsyth estate granted to Malcolm de Callander in 1216. The name ‘Colzium’ comes from the Gaelic cuing leum, meaning ‘gorge leap’ or ‘defile leap’. The ‘z’ was originally silent but is included in today’s pronunciation.

The Callander family lost the Kilsyth estate after the Battle of Bannockburn in 1314. The victorious King Robert I (commonly known as Robert the Bruce) granted the lands to the Livingston family, who had supported Bruce’s cause. In turn, the Livingstons lost the estate after supporting the failed Jacobite rising of 1715. The family fled to Italy and the lands were seized by the government. Colzium was then sold to the York Buildings Company for rental.

Around 1782 the Colzium estate was bought by Sir Archibald Edmonstone, 1st Baronet (1717–1807) and 11th of Duntreath in the County of Stirling. The Edmonstone family sold their ancestral estate in Ireland and made Colzium their principal seat, building a new home for themselves in 1783 and calling it Colzium House.

Archibald was a Tory MP for Dunbartonshire. He and his first wife, Susanna Mary Harenc (d. 1776) had five sons and three daughters. His second wife, Hester Heathcote (d.1797) had no children. The Edmonstone family were very active locally and are associated with a number of local landmarks. Their home incorporated masonry from the ruins of Colzium Castle, which lay just 400 yards from the new house. 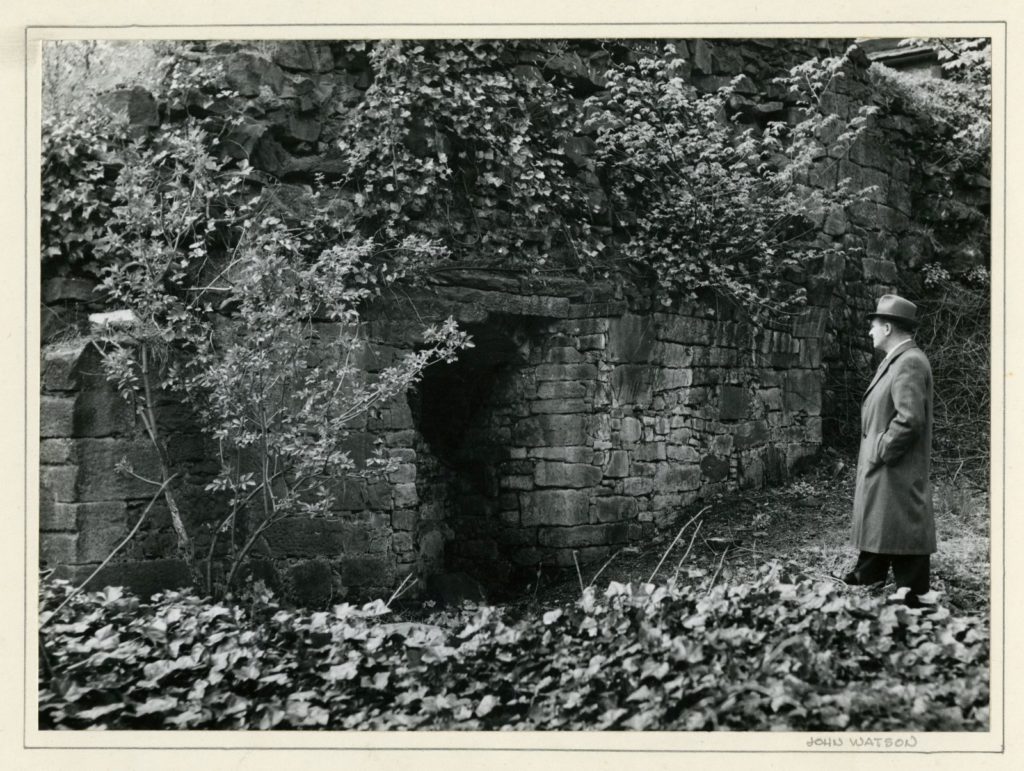 Archibald was succeeded by his third son, Sir Charles Edmonstone, 2nd Baronet (1764–1821) and 12th of Duntreath, the two eldest males having predeceased their father. Charles was also a politician, serving as Tory MP for Stirlingshire from 1812 until his death. He had a son and daughter with his first wife, Emma Bootle-Wilbraham, and four sons and two daughters with his second wife, Louisa Hotham (1778–1840). 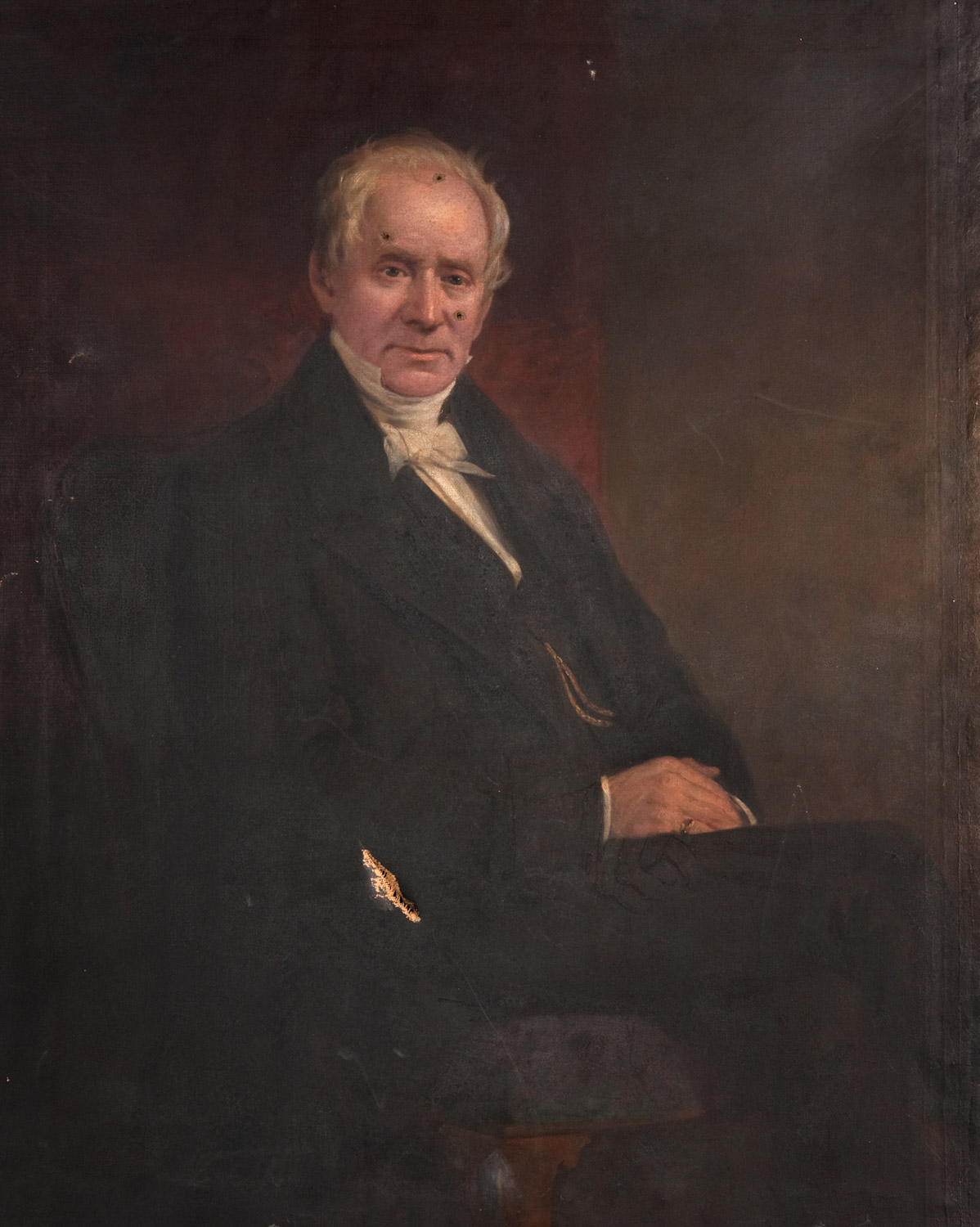 Charles was succeeded by his eldest son, Sir Archibald Edmonstone, 3rd Baronet (1795–1871). A traveller and writer, Archibald contested his father’s seat in Stirlingshire in 1821 but to no avail. He married his cousin Emma in 1832 and the couple had three daughters, all of whom died in infancy.

In 1861, Charles’ son Archibald greatly extended the house, combining Scottish vernacular and modern Renaissance architectural styles. The extensions almost entirely surrounded the original building with new rooms. These included a large hall and a family chapel, where the Edmonstones could practice their Episcopalian faith. 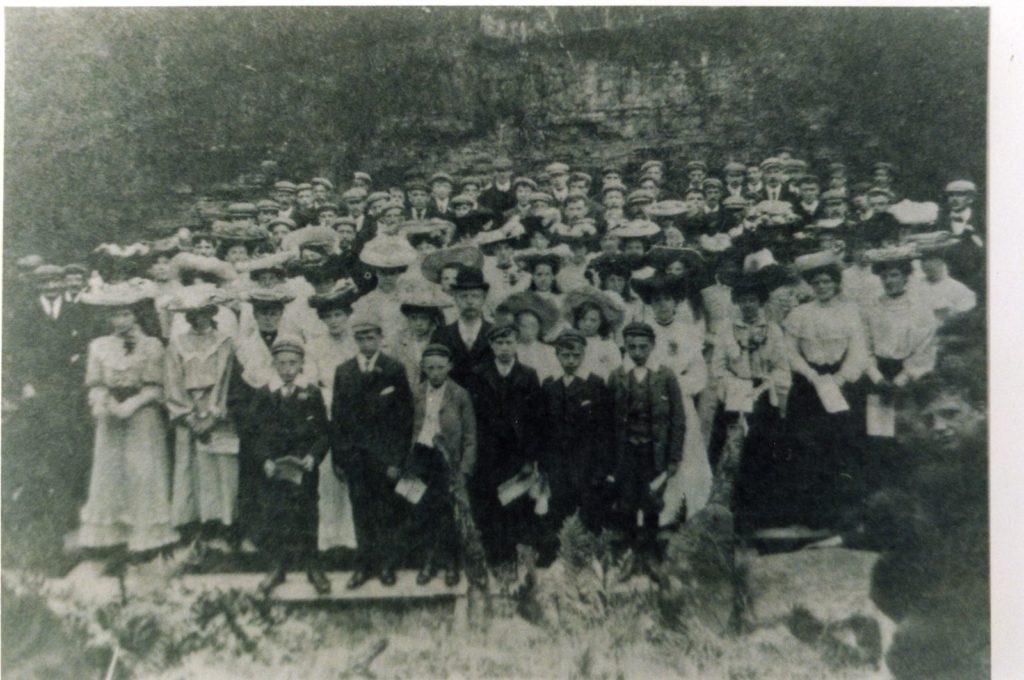 Having no surviving children, Archibald was succeeded by his half-brother, Sir William Edmonstone, 4th Baronet (1810–1888). In turn, William was succeeded by Sir Archibald Edmonstone, 5th Baronet (1867–1954). At this point, following the First World War, the Edmonstones returned to their family seat of Duntreath. They sold Colzium, dividing much of the estate into small plots, which were bought by local residents.

From Town Clerk to the Town of Kilsyth

In 1930, Colzium House was bought by Mr W MacKay Lennox, the Kilsyth town clerk, who gifted the house and its policies to the town when he retired in 1937. It served as a youth hostel in the 1930s, and many children were evacuated to Colzium during the Second World War to escape heavy bombing around Glasgow and the River Clyde. 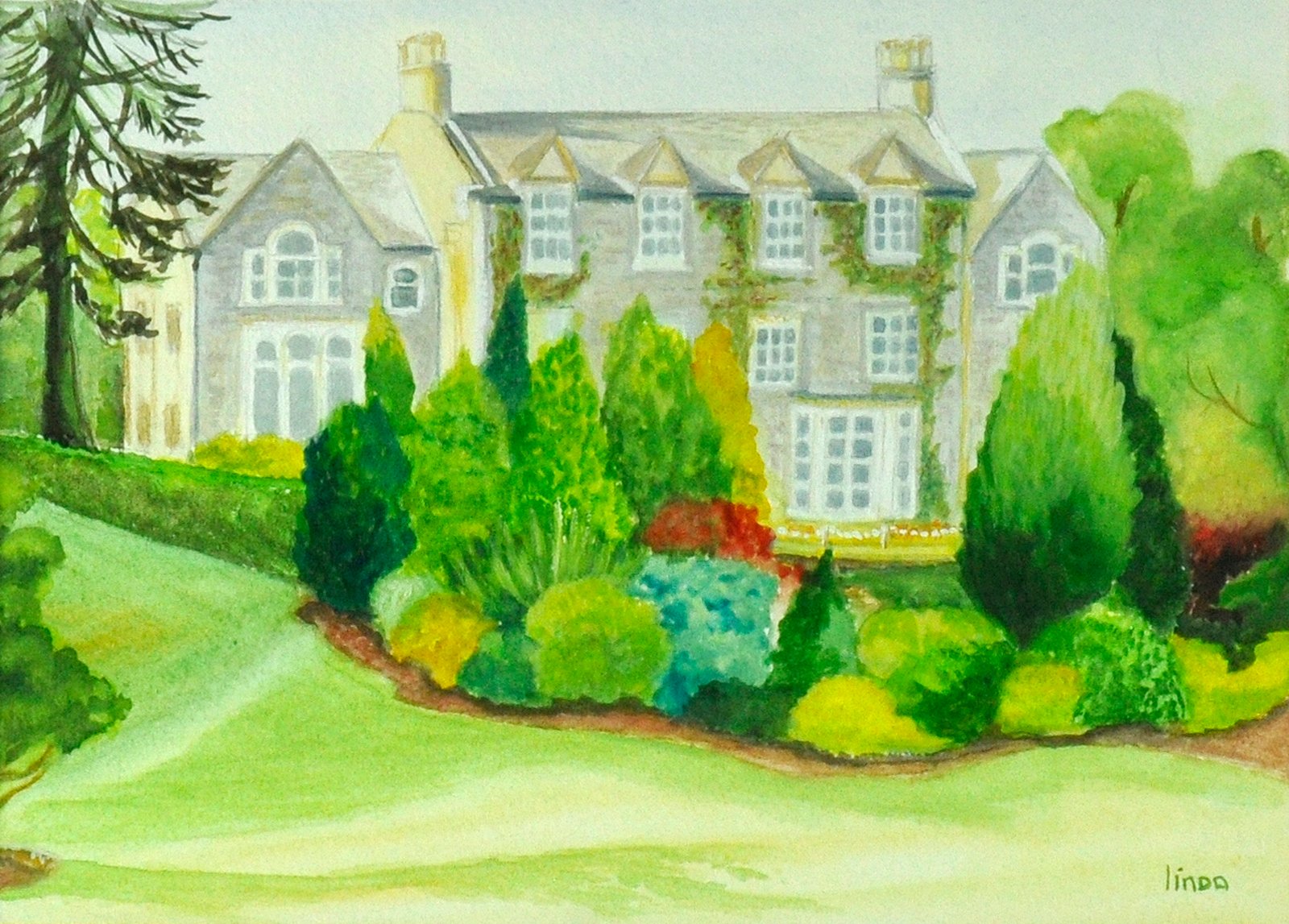 By the late 1940s, the older part of the building was suffering from severe dry rot. The original house was demolished, leaving a courtyard surrounded by the rooms added by the Edmonstones in 1861. Stonework belonging to the original house can still be seen in the surrounding walls, including stones with grooves chiselled in them so that the render could be applied to the walls. Three blocked-up windows from the original outer wall are visible from the large hall upstairs.

The entrance hall has red curtains and soft furnishings, reflecting the era in which this part of the house was built. Natural dyes were used to colour cloth until synthetic dyes were developed in the mid-nineteenth century. These natural dyes tended to fade easily, the one exception being ‘Turkey Red’, which was obtained from madder. As a result, most household fabrics were traditionally dyed red.

Leading off the entrance hall is a single-storey connecting corridor, created in the 1950s after the demolition of the original house. It is now used as a gallery displaying paintings by local artist Alexander Gibson and looks onto the inner courtyard. 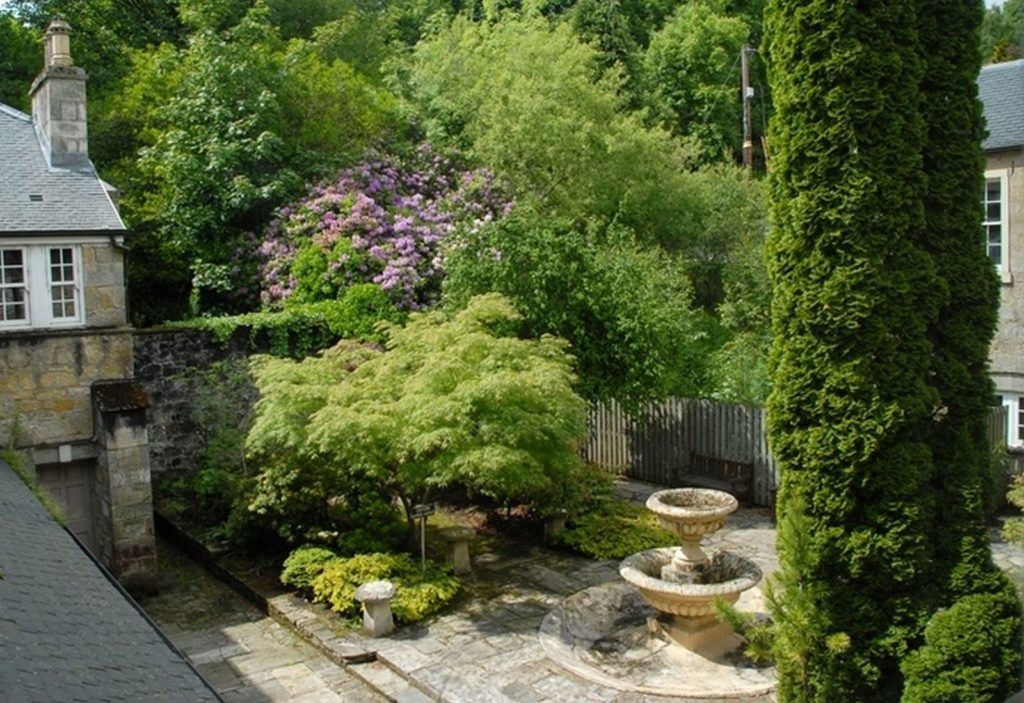 The courtyard was used as an aviary housing two peacocks, along with a collection of small animals. It also contains two fossilized tree trunks, one found in the estate grounds, the other said to have been discovered in the Garrell Burn. The Victorian fountain centrepiece originally stood in the grounds of the house but was re-sited when the courtyard was created in the 1950s. The fountain is made of fireclay, possibly produced by the Garnkirk Fireclay Company, and was restored in 1985.

On the other side of the connecting corridor are two large rooms, now known as the Committee Rooms. These retain their original fireplaces alongside modern brick columns, needed to support the floor of the hall above. A number of the artworks now on display here were bequeathed to the people of Kilsyth in 1949 by David Muir, Registrar of Births, Deaths and Marriages.

The Hall and Chapel

Above, the hall is on a grand scale. It was originally two-storied, with attic accommodation for domestic servants. A coat of arms can be seen on the south wall. This is a cast of the ‘Kilsyth Stone’, which bears the Livingstone-de Bord family shield. The original stone came from Kilsyth Castle and is now in the ownership of Falkirk Museums.

A series of shields representing each quarter of the Arms are mounted high up around the edge of the ceiling. Crossed swords represent the Battle of Kilsyth in 1645, a Bible represents the religious revivals in Kilsyth of 1742 and 1839, crossed shuttles represent Kilsyth’s history as a weaving town and a miner’s lamp represents the area’s prominent ironstone and coal mining heritage. 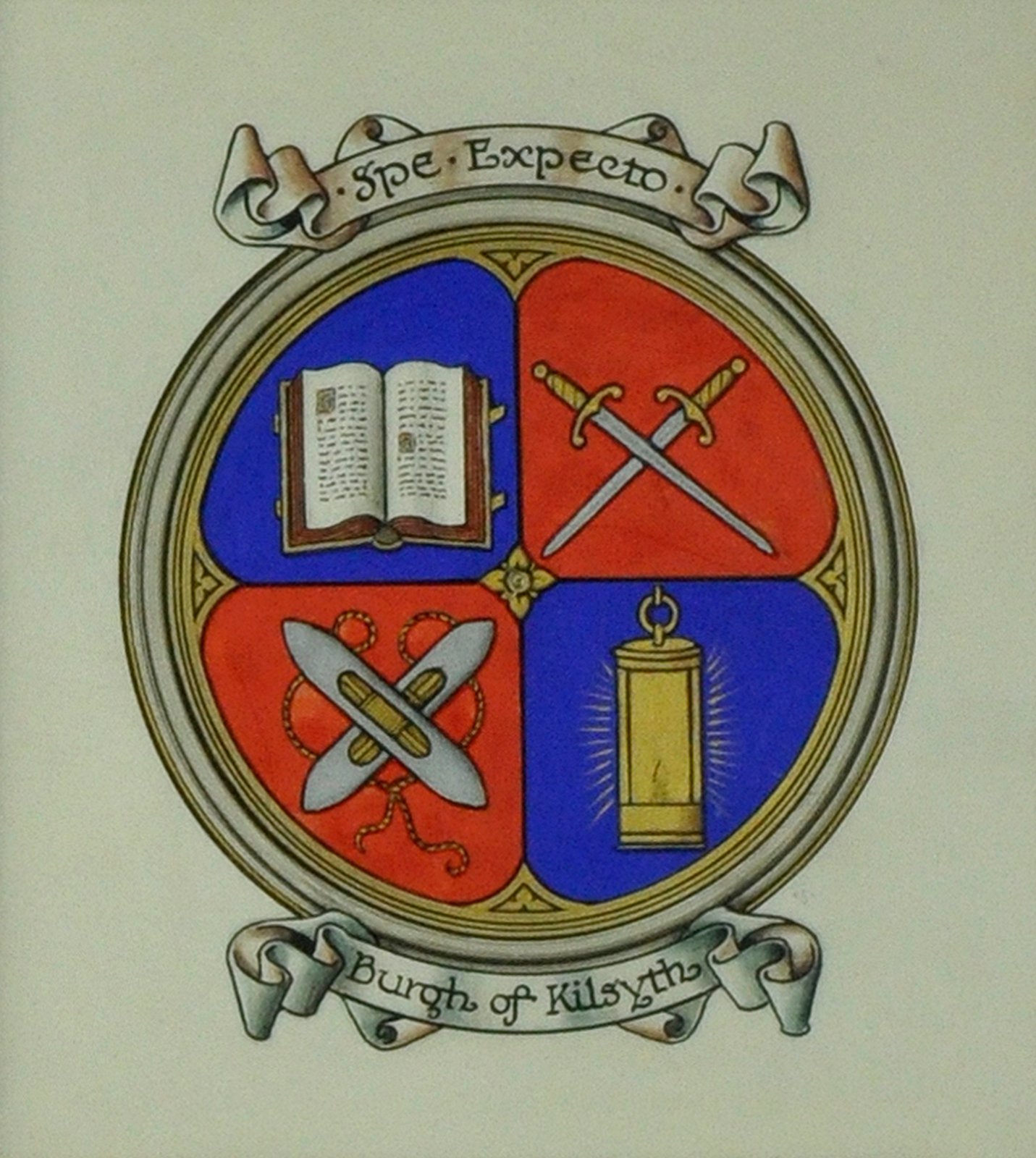 Armorial Bearings for the Burgh of Kilsyth

When the Scottish Burghs lost their status during the local government reorganisation of 1975, their Armorial Bearings reverted to the Crown. Kilsyth Community Council petitioned the Court of the Lord Lyon for the motto to be changed from Spe Expecto (‘I look forward in hope’) to Spe Expectamus (‘We look forward in hope’) to include the whole community. The coat of arms, granted by Lord Lyon King of Arms in 2002, largely maintained its traditional form but is now surmounted by a coronet of pine cones and holly leaves, denoting it as belonging to a community council.

The great hall also boasts a large stained glass window. This is not originally from Colzium but from the house of William Whyte, Provost of Kilsyth (1880-83, 1891-92). The initials ‘WW’ are marked on one pane. The window was brought to Colzium when the Provost’s house was demolished.

The adjacent chapel was turned into a museum in the 1950s. The original windows were uncovered during a refurbishment of the museum around 2010, revealing a beautiful fleur-de-lis design representing the Holy Trinity.

Many of the original museum exhibits are still on display, along with medieval masonry and artefacts from Kilsyth Castle, the font and communion chairs from the Edmonstones’ chapel and sculptures from their family home. 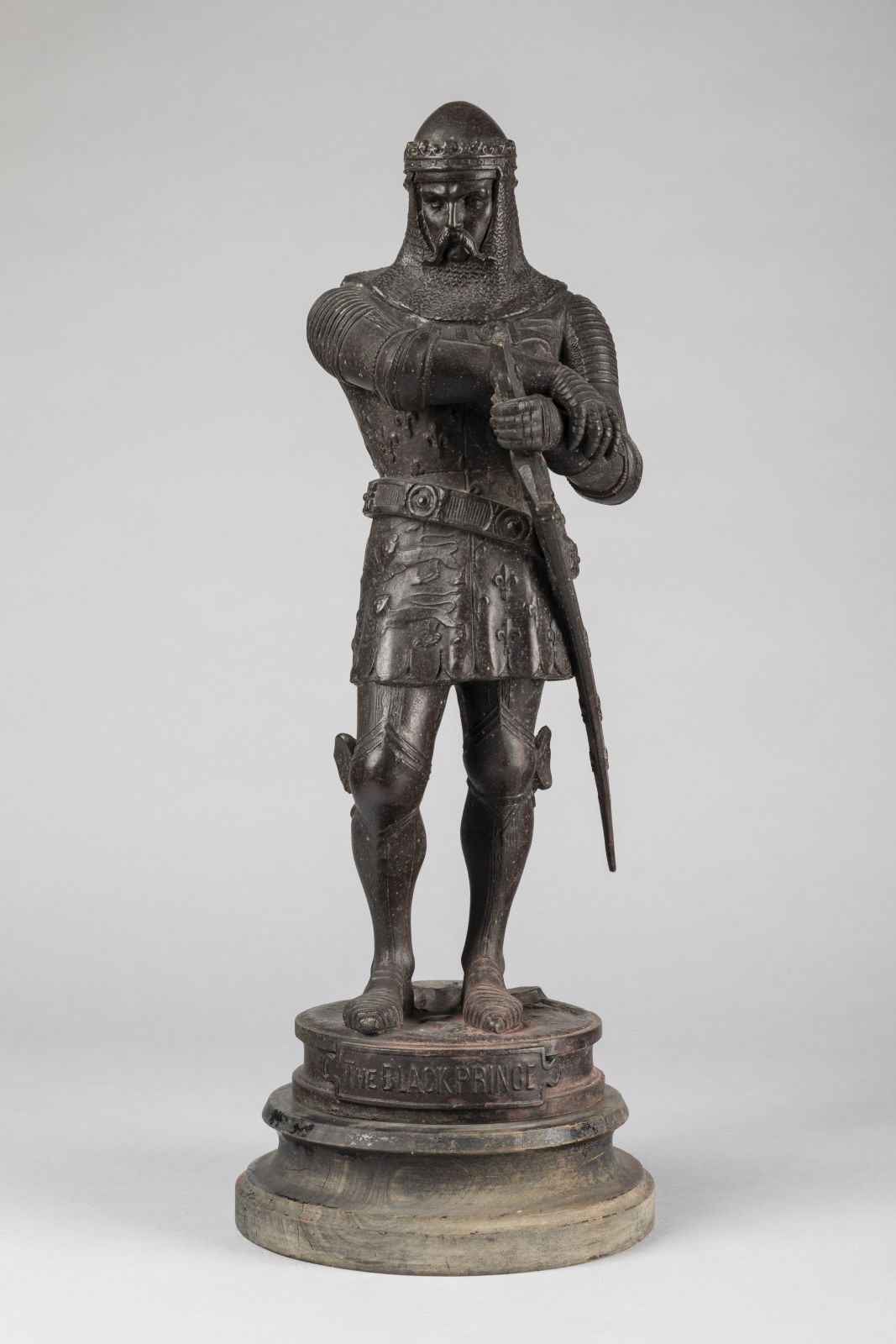 To plan a visit to the Colzium Lennox Estate visit https://culturenl.co.uk/colzium.