‘Dixon’s Blazes’ is a well-known name in Glasgow. Now an industrial estate it was the nickname of the Govan Iron Works whose furnaces were a landmark on the south side from 1837 until 1958. However, the story of the Williams Dixon, father and son, has strong links with Lanarkshire, North and South as well as with two key technical innovations that were to transform the iron industry in the 1800s. 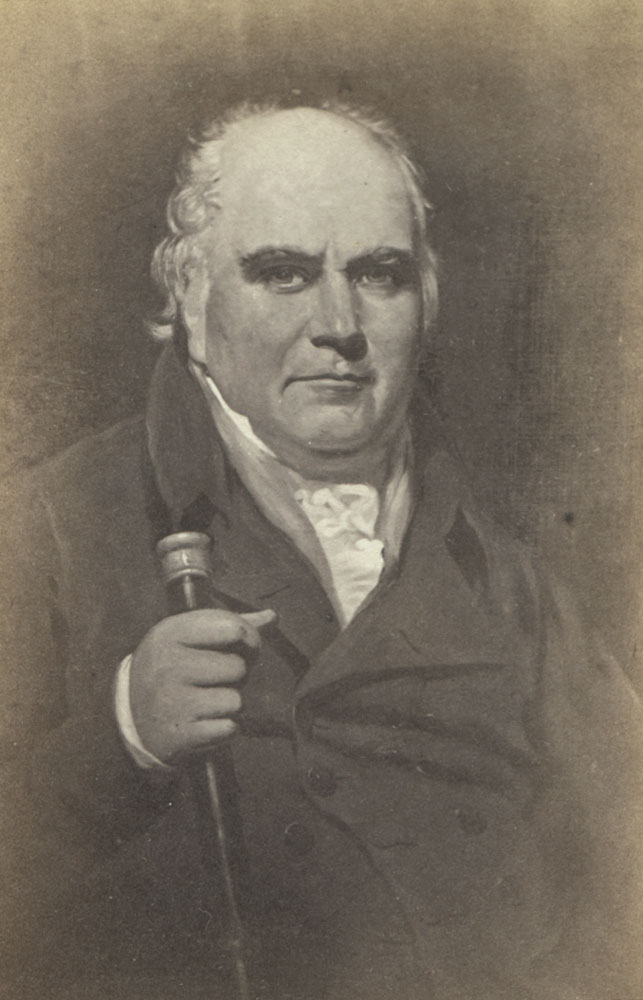 William Dixon Senior (c.1753-1822) was a coal miner born in Northumberland. In about 1770 Dixon, still in his teens moved to Scotland with a number of his fellow miners in search of work. William was about 17 and found employment in a pit in Govan. Within only a few years he was in a position to lease coal deposits there himself. 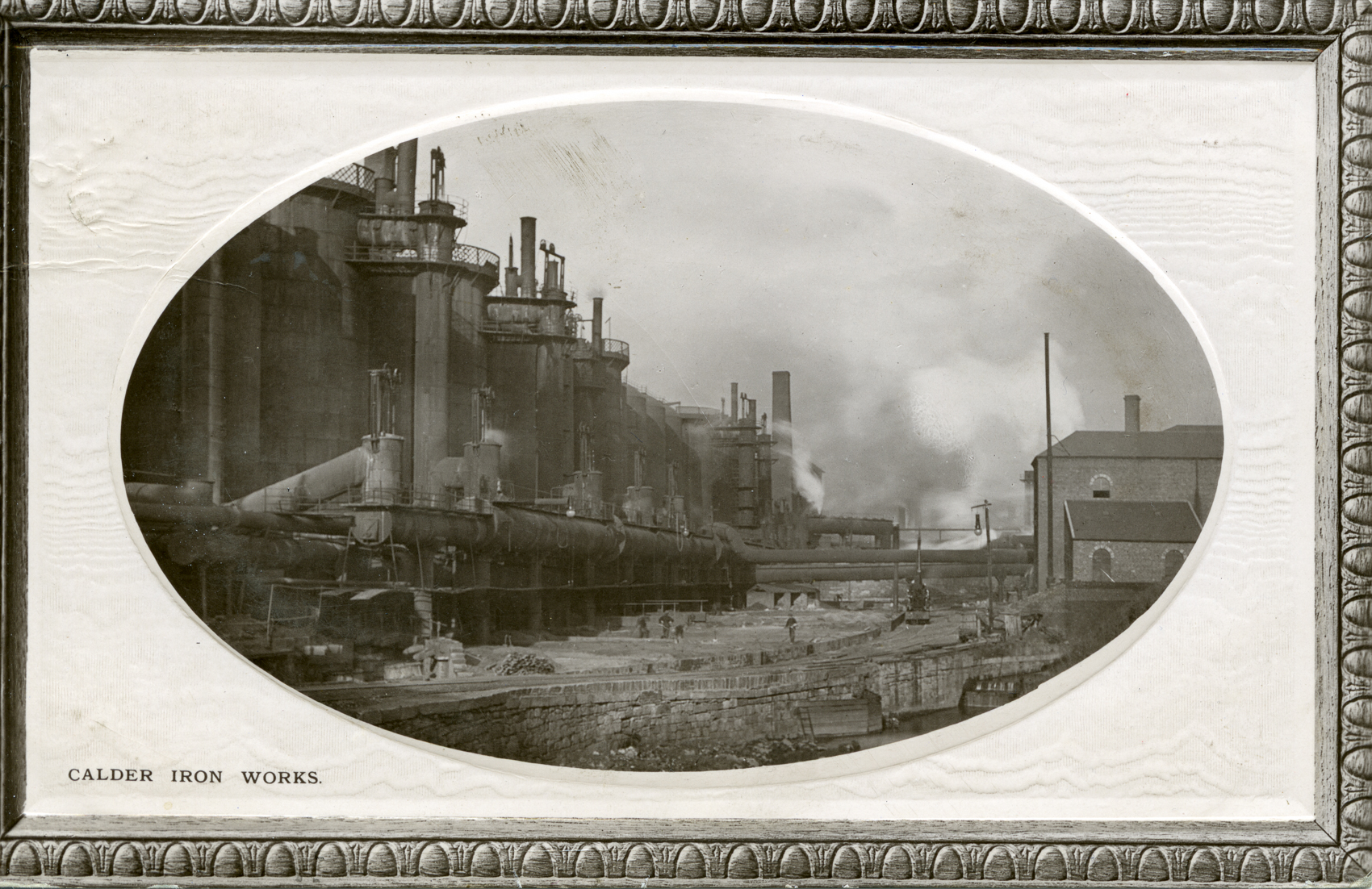 The Calder Iron Works, Coatbridge seen from across the North Calder Water around 1900. Built around 1795 this was the Monklands’ first pig iron works. After David Mushet was made manager in 1800 it was the first ironworks to make use of the local blackband ironstone. It was also one of the first ironworks to use James Beaumont Neilson’s Hot Blast process. The works closed in 1921.

Coatbridge’s Calder Iron Works had been established in around 1795 by a company largely made up of Glasgow stocking weavers. However the business appears to have been unsuccessful as only a few years later the works was put up for sale.

The Calder Works was bought for £4,000 (less than a third of what they had cost to build) by William Dixon, along with James Creelman (who had a pottery and tileworks on the nearby Coats Estate) and David Mushet. Mushet became the manager and oversaw improvements to such an extent that when the partnership dissolved a few years later the business was sold for £19,000.

Mr Fleming was born in 1903 in Calder Place. He followed his father into the Calder Iron Works. He was interviewed in the 1980s and here describes the neighbouring Calder and Carnbroe Iron Works and Dixon's estate. 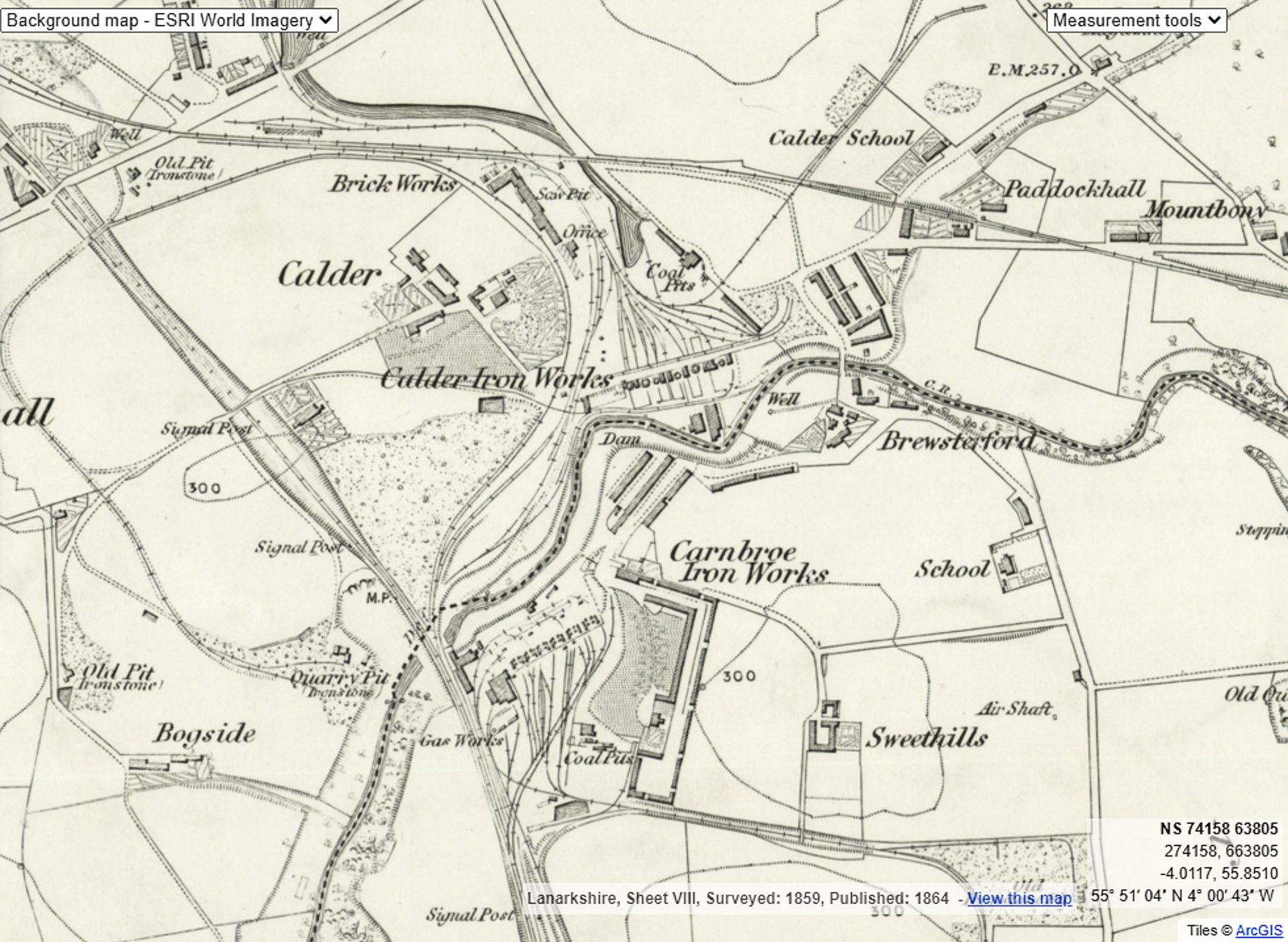 The Calder Iron Works from the 1st OS map, 1859. The works was built on the Calder Estate and you can see Calder House with its gardens just to the north-west. The small gatehouse at centre-far left still stands as a private house. The Carnbroe Iron Works to the south was built by Merry & Cunninghame in 1838. National Library of Scotland.

David Mushet became famous for his discovery that the local blackband ironstone, nodules of ironstone found within coal seams could be smelted in a blast furnace without first turning the coal into coke. However, this discovery wouldn’t really come to fruition until James Beaumont Neilson invented the Hot Blast Process some 25+ years later. William Dixon Jnr would play an important role in the development of Neilson’s process. In the meantime, the ironworks continued to smelt clayband ironstone.

William Dixon’s partnership with Creelman and Mushet came to an end in 1802, apparently due to a business disagreement. Dixon bought the whole enterprise to become sole proprietor. The following year he acquired the Palacecraig Estate for its minerals.

William Dixon continued to acquire coal leases in and around Coatbridge, buying land at Faskine in 1819. In 1821 he purchased the Wilsontown Estate on the moors near Forth, with its mine and ironworks. Meanwhile, Dixon’s Govan collieries were among the biggest in Scotland with a workforce of nearly 700 by 1834. Unusually these collieries used the ‘Longwall’ mining technique where a face was opened-up between parallel roadways. This was years before the technique was taken-up elsewhere in Scotland. 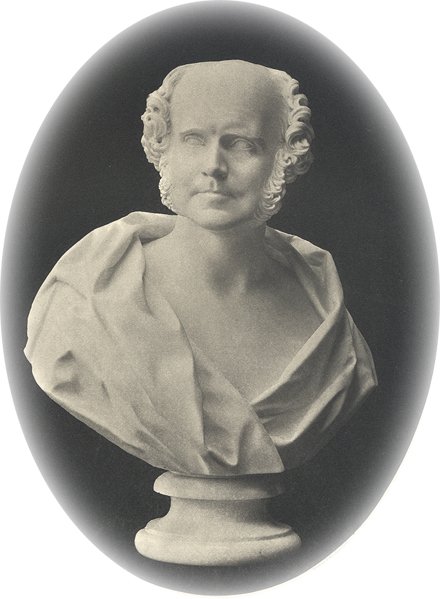 William Dixon died in 1824, leaving his property to his eldest and youngest sons, John and William. John had no interest in iron manufacture so William bought his share in the Calder Works, taking in partners to enable him to pay for it. In 1835 this partnership was dissolved and the younger William Dixon was able to take full ownership of the business.

By 1829 the Calder Works had three of its four furnaces in blast, together producing on average 110 tons of pig iron per week. Each ton of iron that was produced required over 8 tons of coal which was burned in heaps before use to produce coke. However, this was about to change.

Shettleston-born James Beaumont Neilson was an engineer at the Glasgow Gas Works, Townhead who developed an interest in metallurgy. It was his discovery that by heating the air that was blown into a blast furnace he could increase the yield of iron for the same amount of raw materials. This discovery also made it possible to use the local blackband ironstone without coking the coal first.

William Dixon was supportive of Neilson’s work and allowed him to experiment at Wilsontown and Calder. Neilson patented his method in 1828 and it was at the Calder Works the following year that the hot blast was first applied to a blast furnace smelting iron ore. In 1832 the Calder Works was where for the first time raw coal was successfully substituted for coke in a blast furnace. 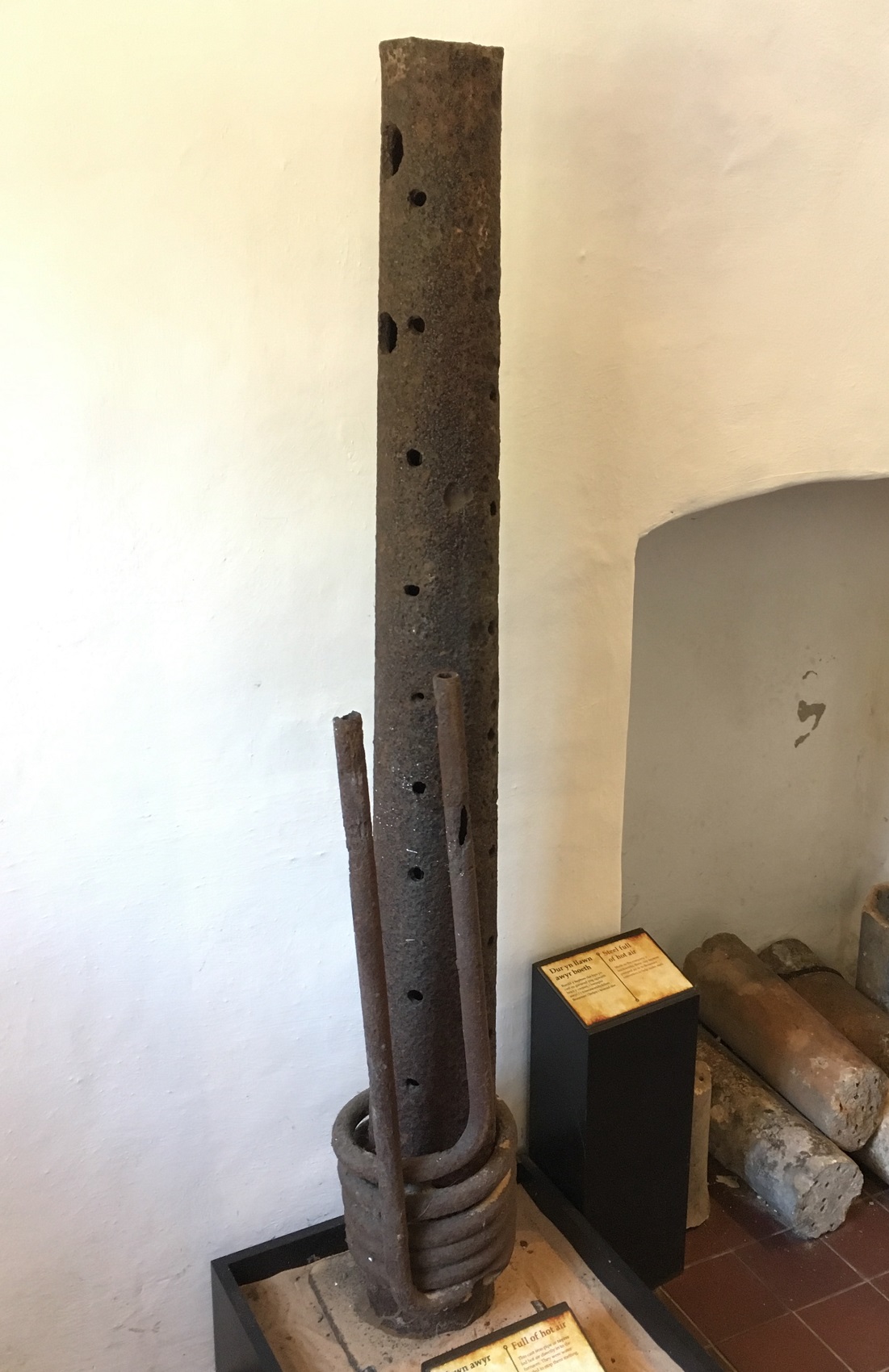 In 1834 the engineer John Condie (who later invented a type of steam hammer) devised an improved water-cooled tuyère (the nozzle through which the hot blast enters the furnace) while working at Wilsontown.

As an acknowledgement of the help he had received Neilson allowed Dixon to use the hot blast process royalty-free in two of his furnaces at the Calder Works and gave him a cut of the royalties from his patent. This was on condition that Dixon didn’t patent the improvements that had been made in his works and suggests that those improvements were sufficiently big that Neilson might struggle to defend his patent. 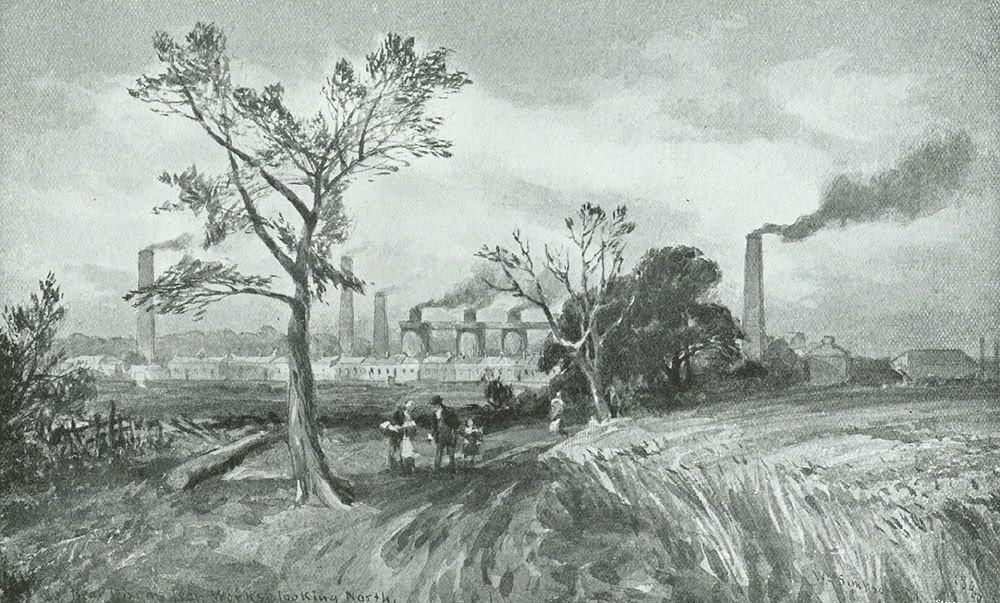 Govan Iron Works looking North, drawn by William Simpson in the late 1840s. The row of single-storey ironworkers’ houses in front of the works was called Alexander Row. Soon a malleable iron department would be built in the field to the left.

In 1837 William Dixon Jnr established a new pig iron works near Glasgow close to where his father had first settled in Scotland, the Govan Iron Works. Dixon later added a malleable iron works next to it. There the pig iron from the blast furnaces would be converted into malleable iron using the puddling process. Along with the Calderbank Iron Works near Airdrie and Coatbridge’s Dundyvan Works, Dixon’s was one of the first ironworks to successfully mass-produce malleable iron in Scotland. 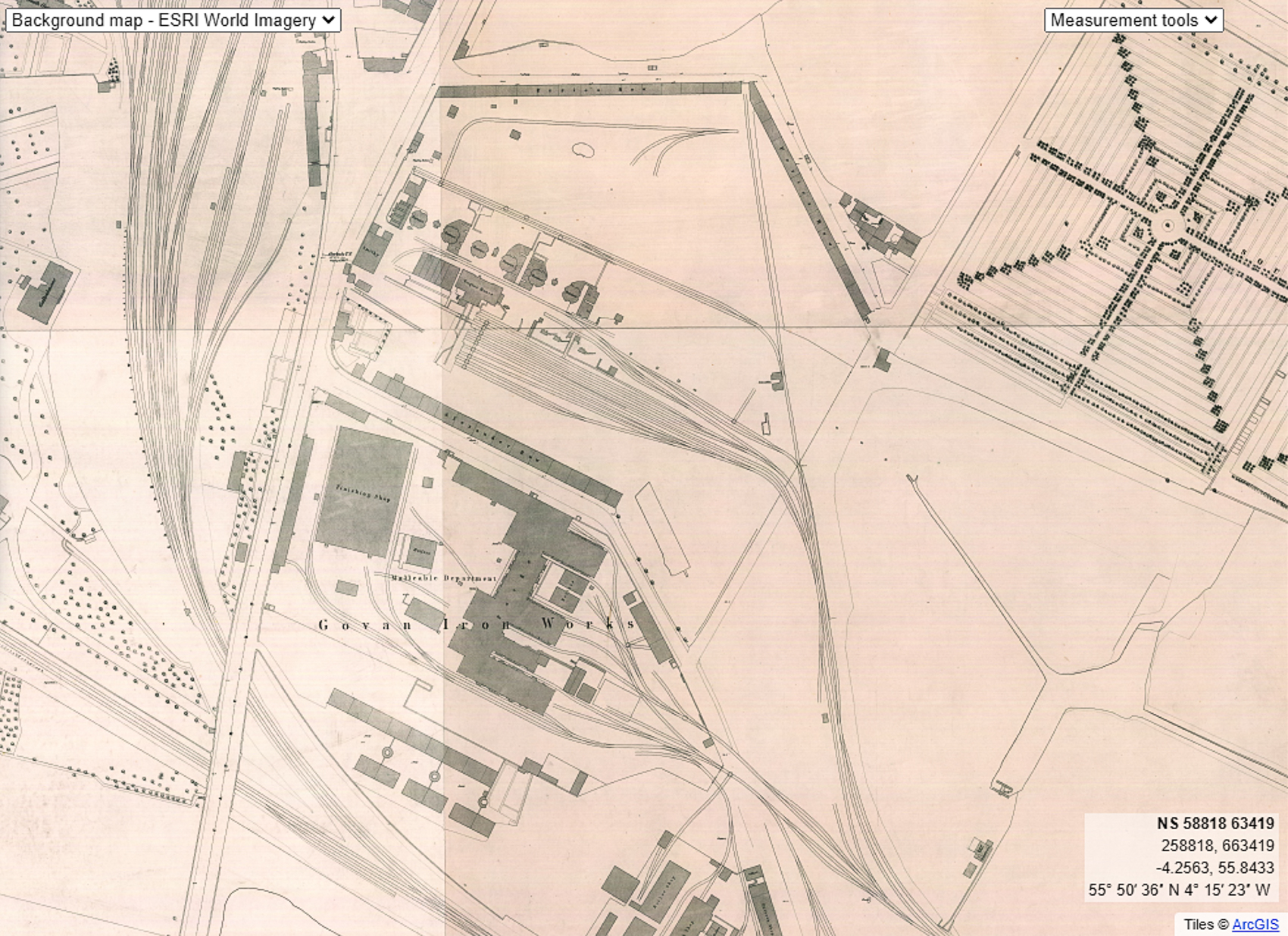 Govan Iron Works from the 1st OS map, 1857. The pig iron works is to the north with the newer malleable iron department to its south. The Southern Necropolis is at top-right (National Library of Scotland).

The location of the works near to the River Clyde was ideal for transporting the finished product. This was a far cry from the remote Wilsontown Iron Works which would close soon afterwards, in 1842. Dixon continued to build the business, selling the Palacecraig Estate and instead acquiring land at Carfin which had coal reserves suitable for ironmaking.

William Dixon died in 1862 and was succeeded by William Smith Dixon, who had been born in 1824. The Govan and the Calder Iron Works continued in the Dixon family until 1873 when a new company, William Dixon Ltd (later Dixons’ Ironworks Ltd) was formed. 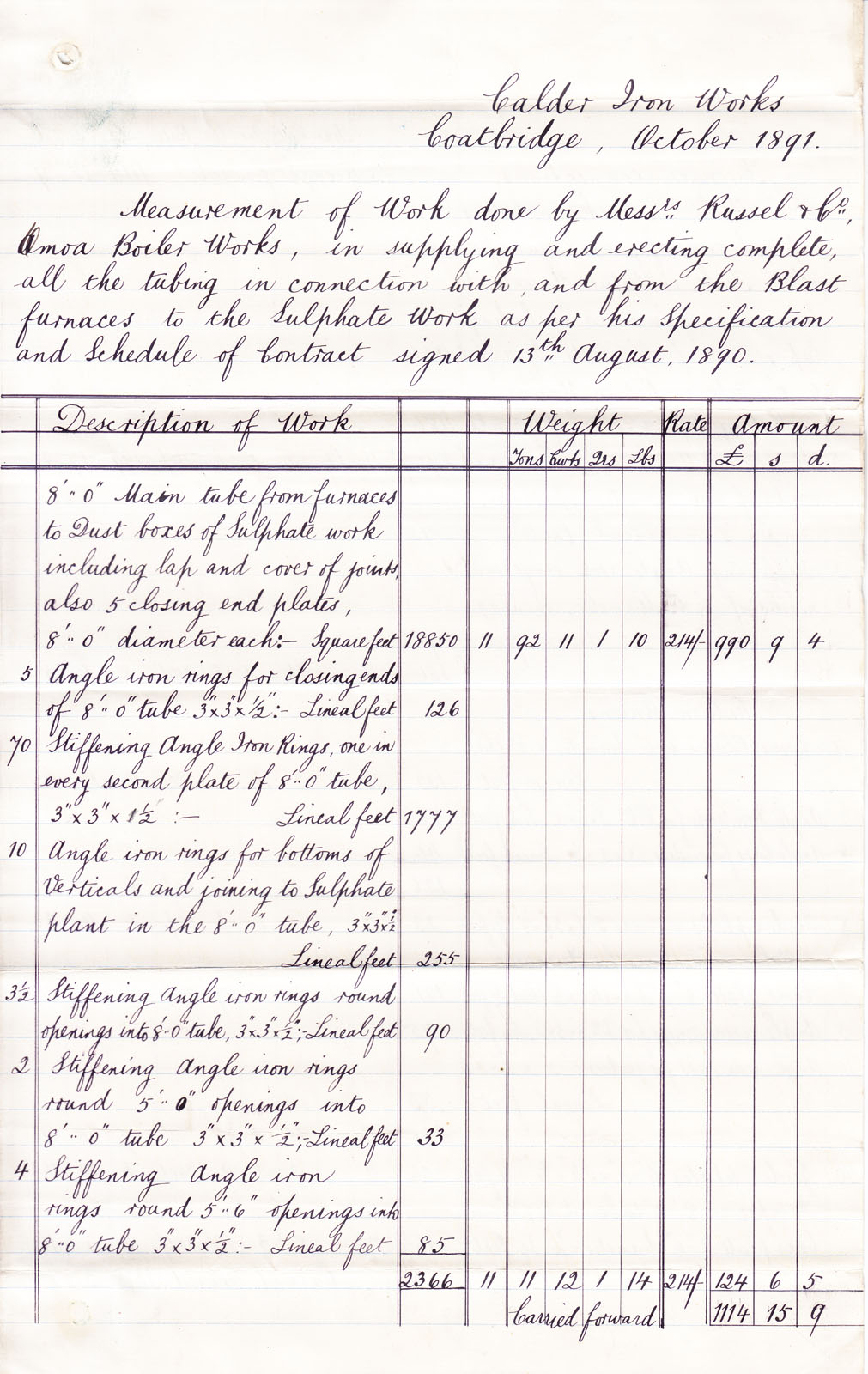 Schedule of Work Done for the Calder Iron Works, 1892

The Calder Iron Works closed in 1921 although the furnaces appear to have remained standing and in the ownership of William Dixon Ltd until 1938.

In 1953 the company was bought by the Motherwell-based steel giant Colvilles. The Govan Iron Works continued to trade as part of Colvilles until it was eventually closed in 1958. The listed building that had housed the company’s Glasgow office at 1 Dixon Street was demolished in 2018. Although Dixon’s Blazes are long blown-out, the Hot Blast Process which was pioneered in the family’s furnaces continues to be used to this day.

North Lanarkshire’s Cinemas: Behind the Scenes