Tube manufacture is an often-overlooked side of the steel industry but was very important to the North Lanarkshire economy. By the mid-1900s the tubemaking giant Stewarts and Lloyds had multiple factories in Coatbridge alone as well as Airdrie and Mossend.

Andrew Stewart was one of the key figures in the growth of the industry and began making iron tubes in Glasgow in 1860. Stewart’s original Clyde Tubeworks was a small factory in St Enoch’s Wynd on a site now covered by the St Enoch Centre.  As the business expanded he took his brother James into partnership. The new firm of A & J Stewart re-located to Coatbridge in order to be closer to the raw materials they needed and founded a new and much larger Clyde Tube Works in 1867. At the time it was the biggest tubeworks in Scotland. 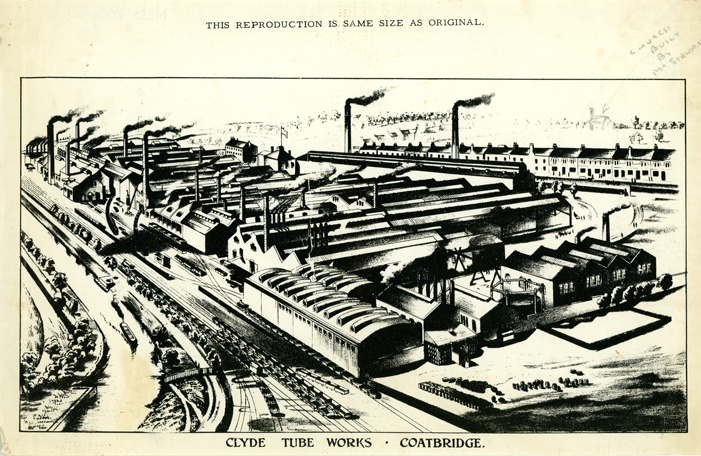 Iron and steel tubes were widely used in industry, as pipes carrying water, steam and gas. They were also used inside the boilers of steam engines, so-called ‘multi-tube boilers’. Tubes were also needed for the oil industry: shale oil extraction was invented in Scotland and later on steel tubes were needed by the North Sea oil industry as well as nuclear power stations. There are two types of steel tubes: welded and seamless and they are made in different ways. The Stewarts would go on to make both. 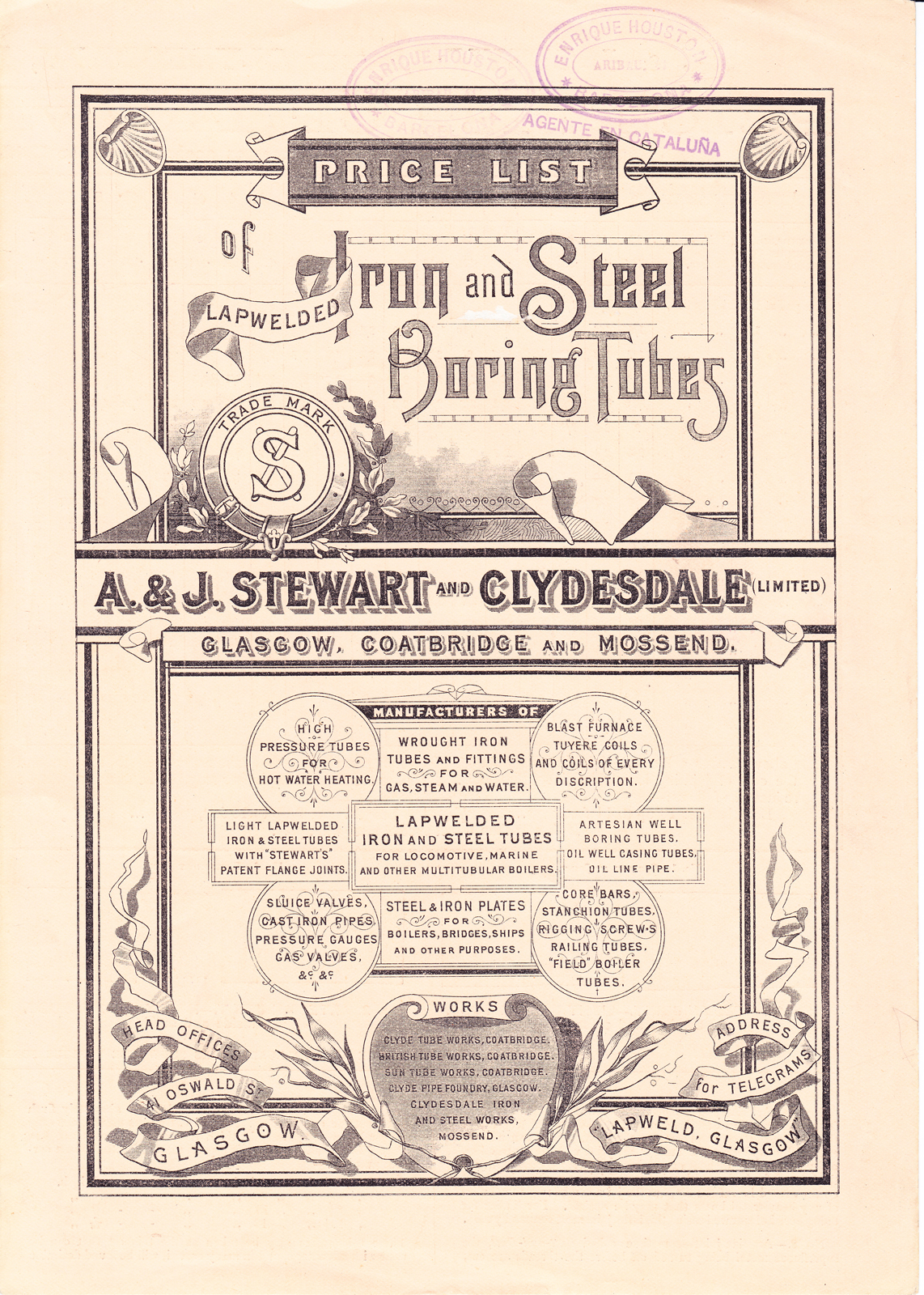 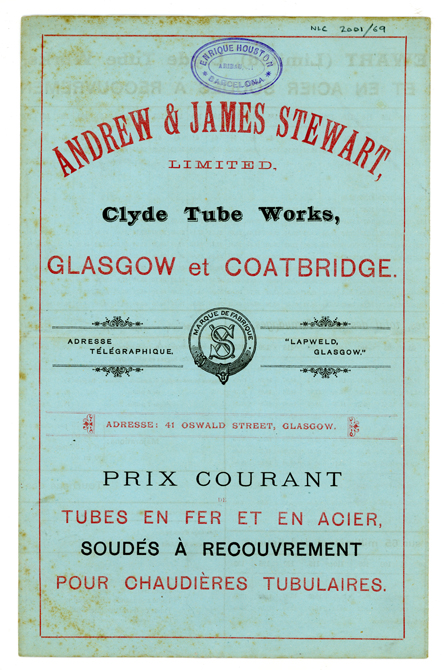 In 1889,  J G Stewart and T C Stewart, sons of Andrew Stewart, founded the firm of Stewart Brothers and began making lap weld tubes at the British Works. A year afterwards this firm was merged with A & J Stewart Ltd and the Clydesdale Iron and Steel Company (which since 1871 had been manufacturing iron strip for tubemaking at their Mossend works and since 1884, had undertaken steel smelting) and the whole turned into a public limited company with the style of A & J Stewart and Clydesdale Ltd. This merger meant that the company now owned facilities for making the iron and steel needed to manufacture tubes and they set about modernising the steelmaking plant. 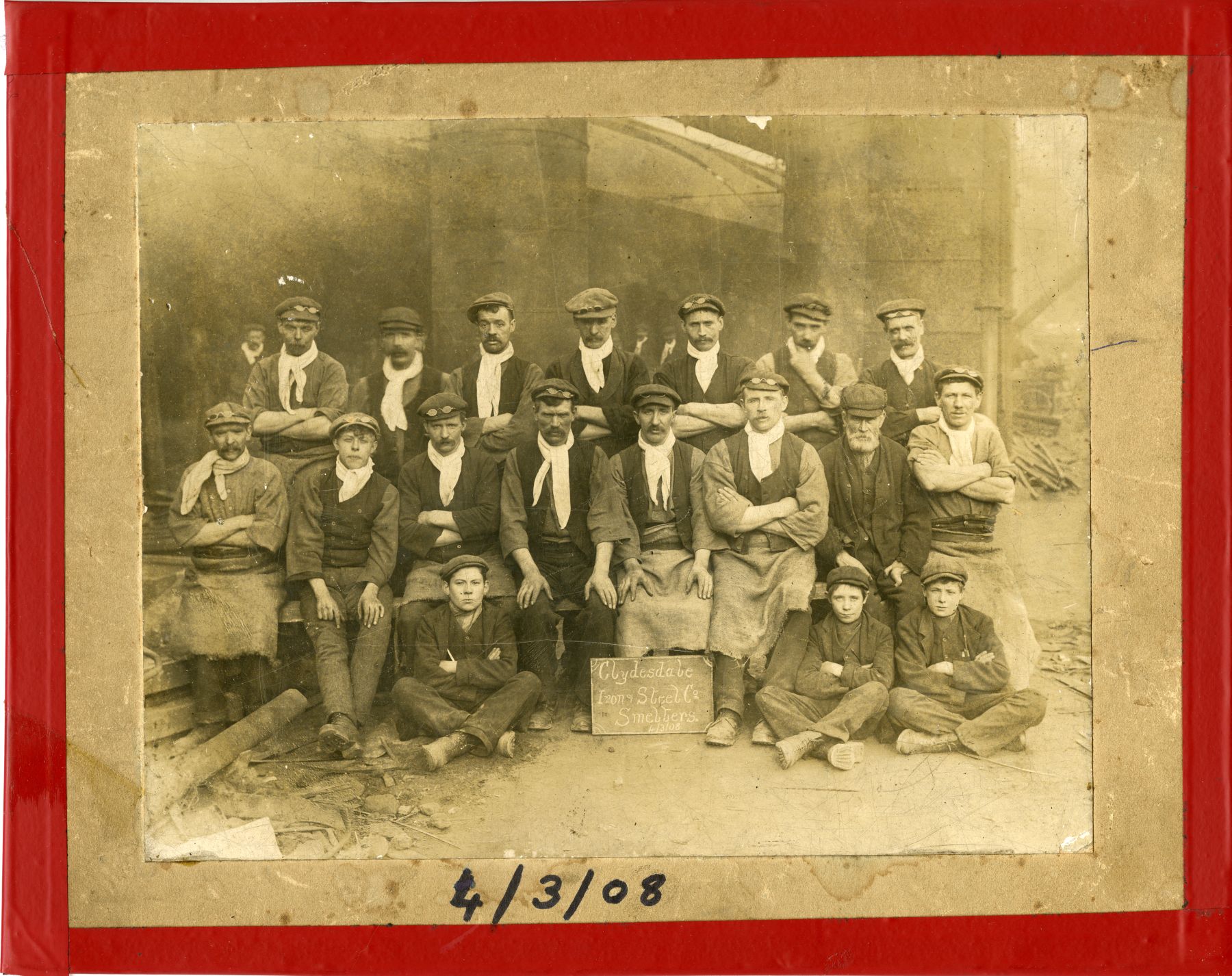 In 1898 the Imperial Tube Works was built in Airdrie to make large diameter tubes. That same year the firm expanded again when it absorbed James Menzie & Co who ran the Phoenix Tube Works in Rutherglen. The new firm was called A & J Stewart and Menzies Ltd. However, a much bigger merger was just round the corner.

In 1903 A & J Stewart merged with the Birmingham tubemaking giant Lloyds and Lloyds Ltd to form Stewarts & Lloyds Ltd. The deal created the biggest tube-making company in the UK.

During the Second World War Stewarts and Lloyds supplied forged shell casings. They also played a key role in Operation PLUTO (Pipeline Under the Ocean) which involved constructing pipelines under the English Channel to support the Normandy Landings. Stewarts and Lloyds supplied 1,000 miles (1,600 km) of pipe for the project and in total they supplied over 16,000 miles (26,000 km) of pipe for the war effort. 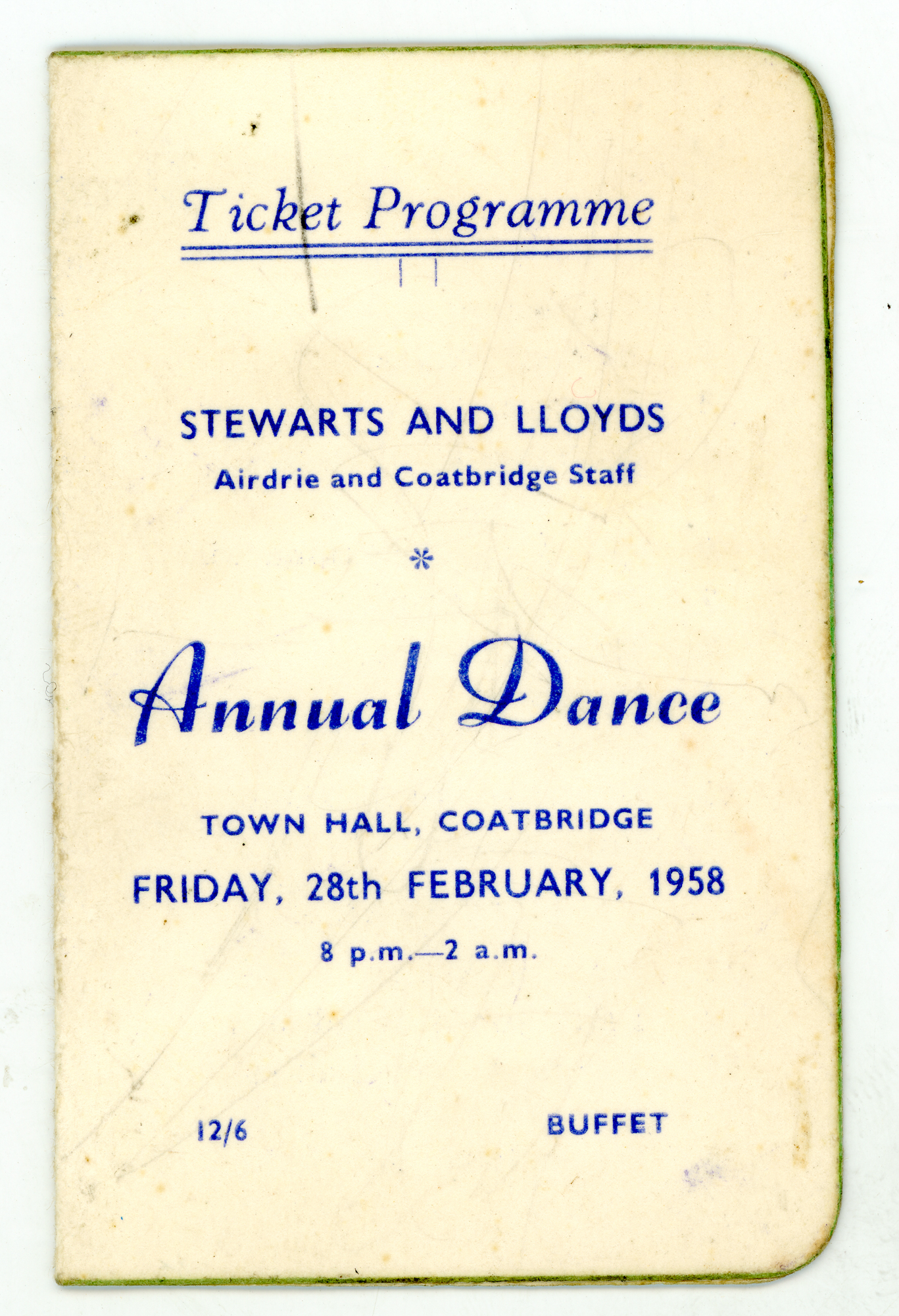 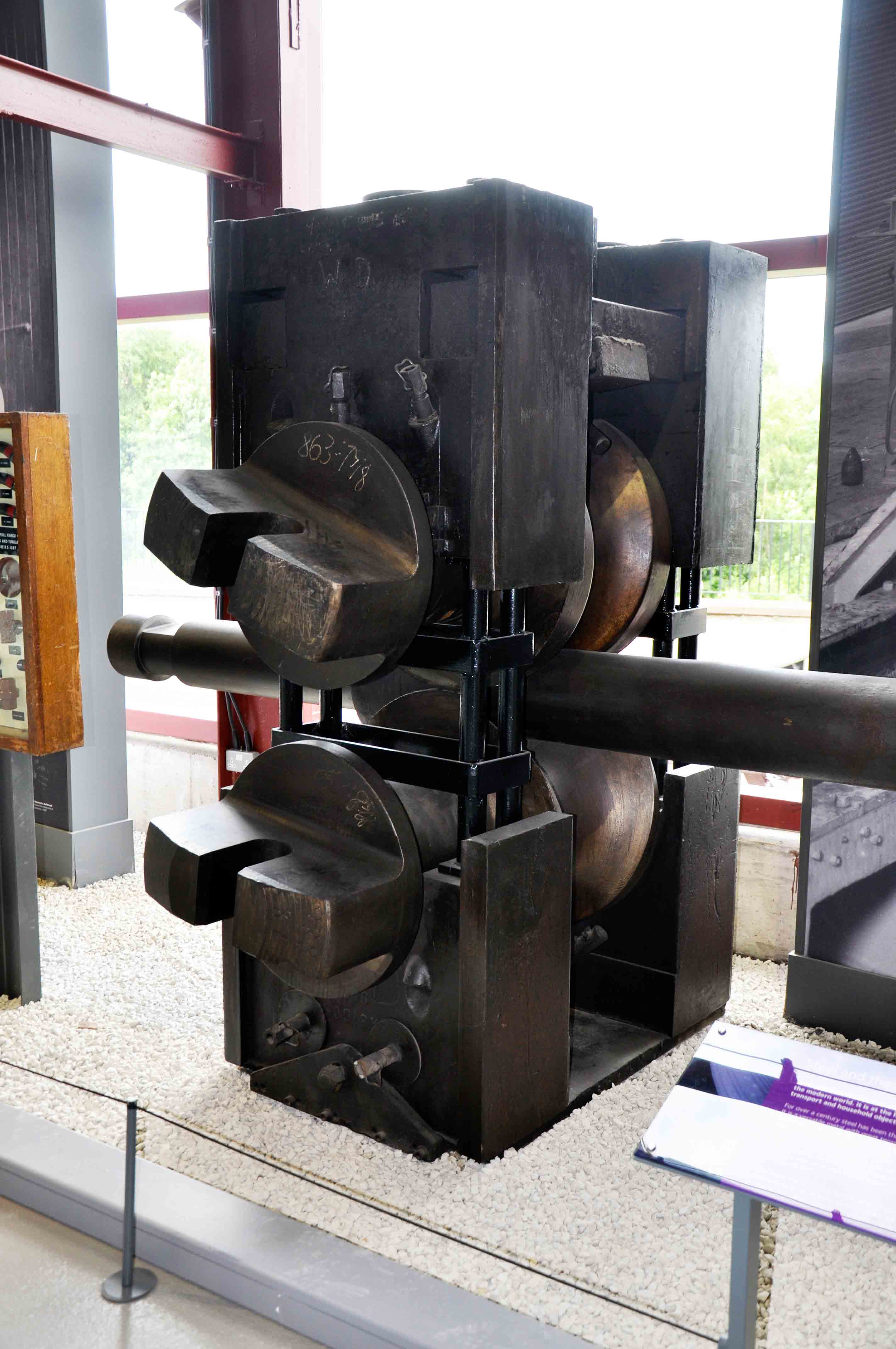 After the war a new seamless tube plant was installed in the Clydesdale Tube Works at Mossend. Work began in 1945 and the plant was commissioned in 1948 with a second mill added in the 1960s. 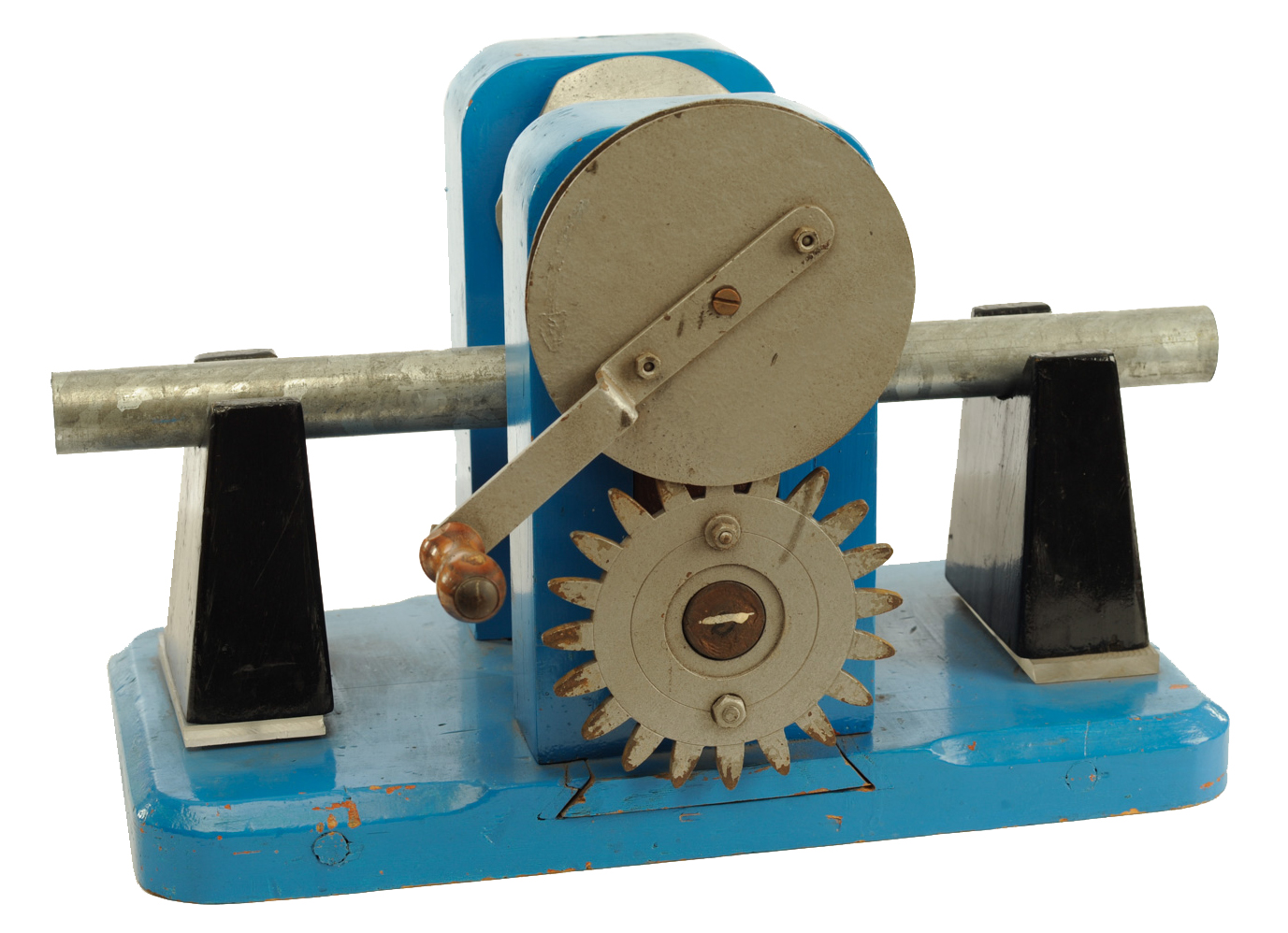 In the 1970s British Steel decided to phase-out the Siemens-Martin (or ‘Open Hearth’) steel-making process. At the Clydesdale Works, two electric-arc furnaces were replaced the four open hearth furnaces in 1975.

A second nationalisation took place in 1967 with Stewarts and Lloyds’ steelworks becoming part of the British Steel Corporation. The 1970s saw the tube-making business benefit from demand for tubes from the North Sea oil industry but in the 1980s foreign competition and slowing demand led to the closure of most of the works and the end of tube-making in Scotland came with the closure of the Calder Works in 1991. However, the adjacent quench and temper plant remains open.

The museum collection contains a wealth of material relating to Stewarts and Lloyds and its related businesses and you can view some of the highlights of the collection here. 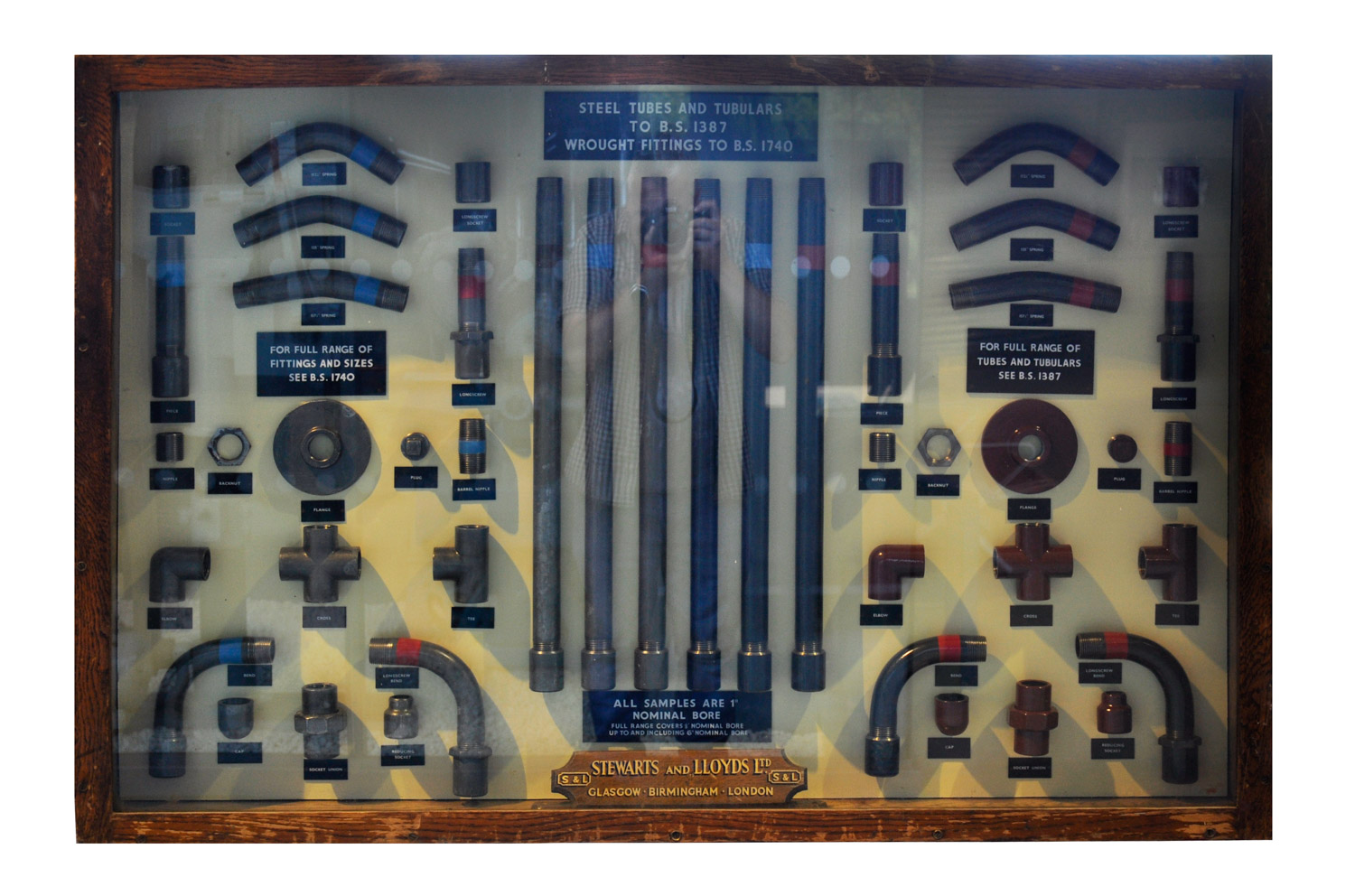 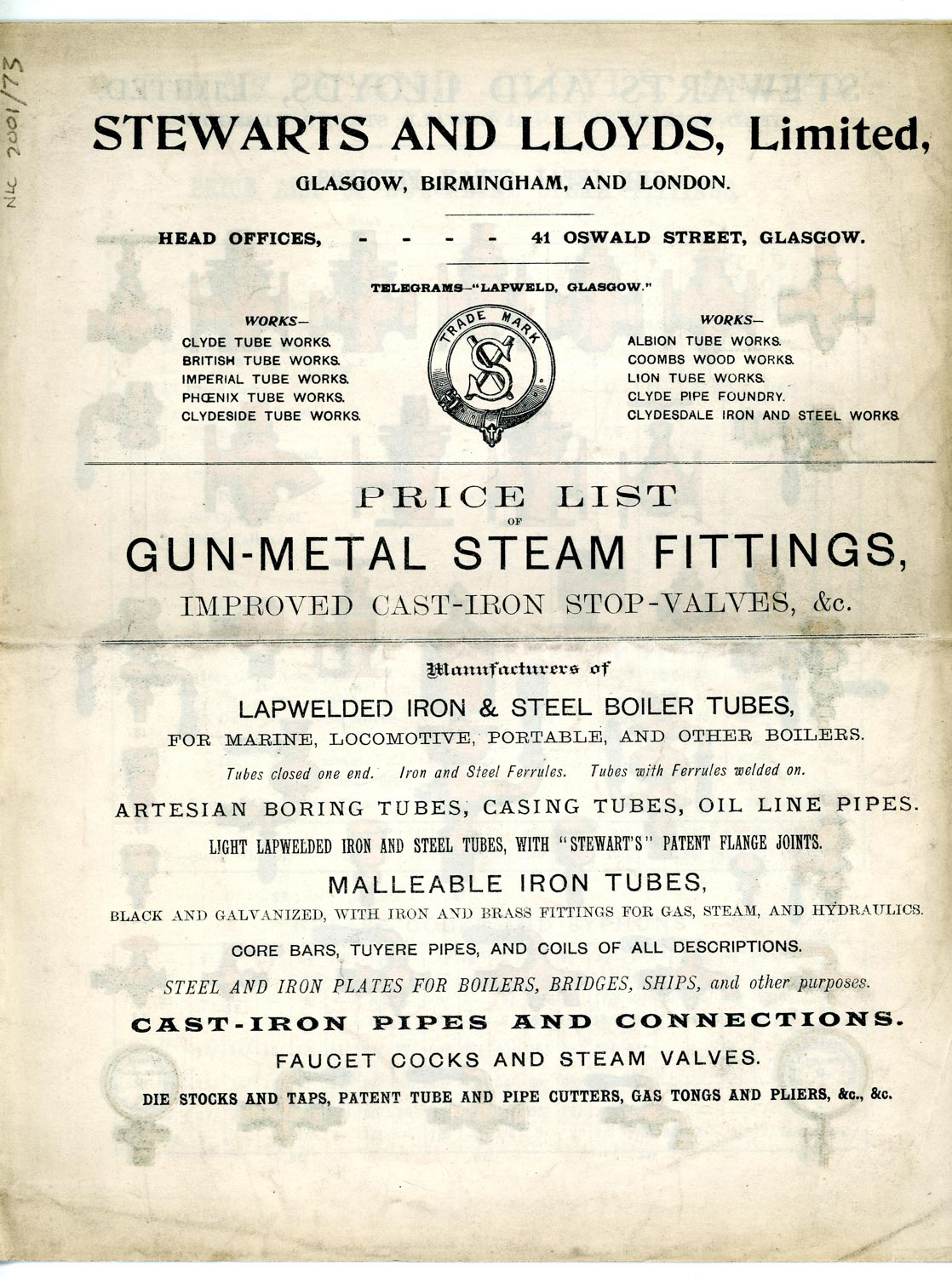 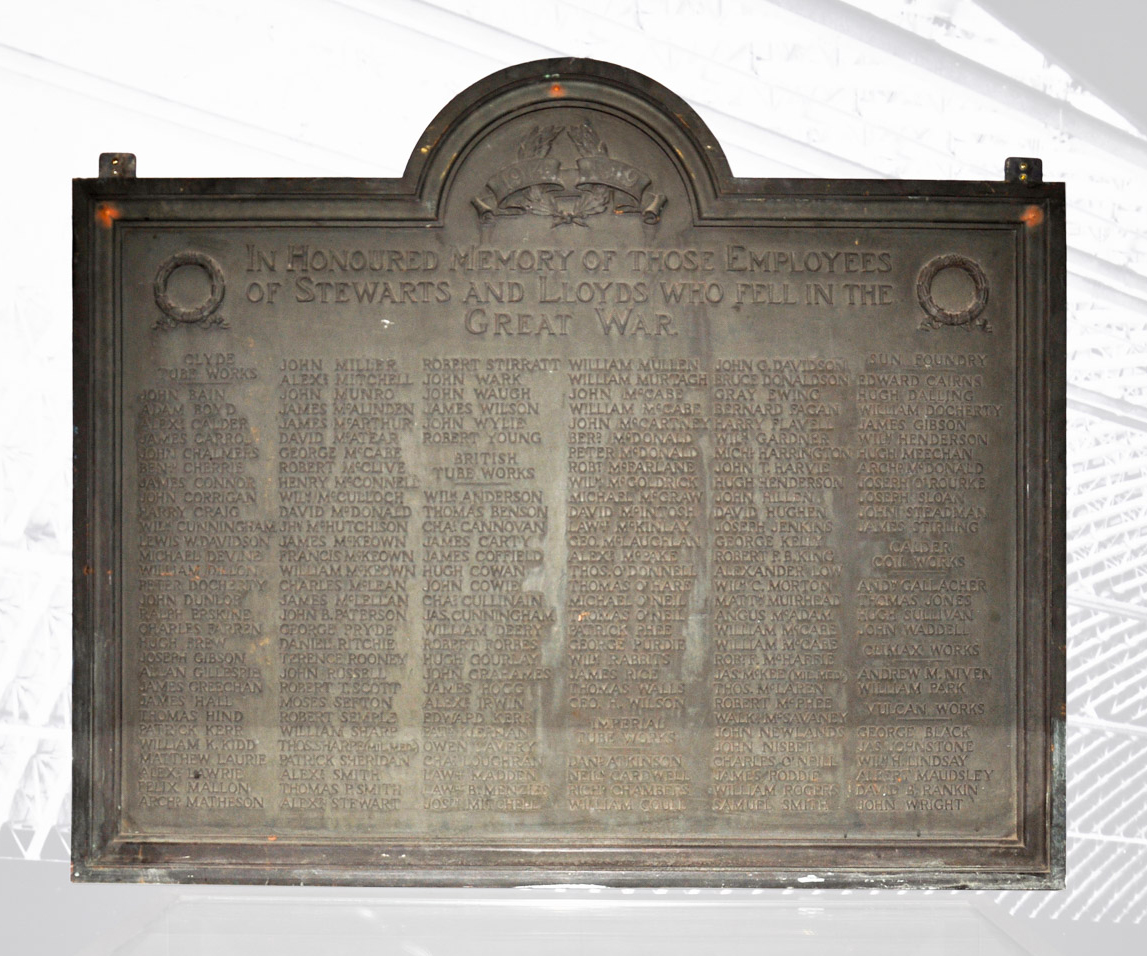 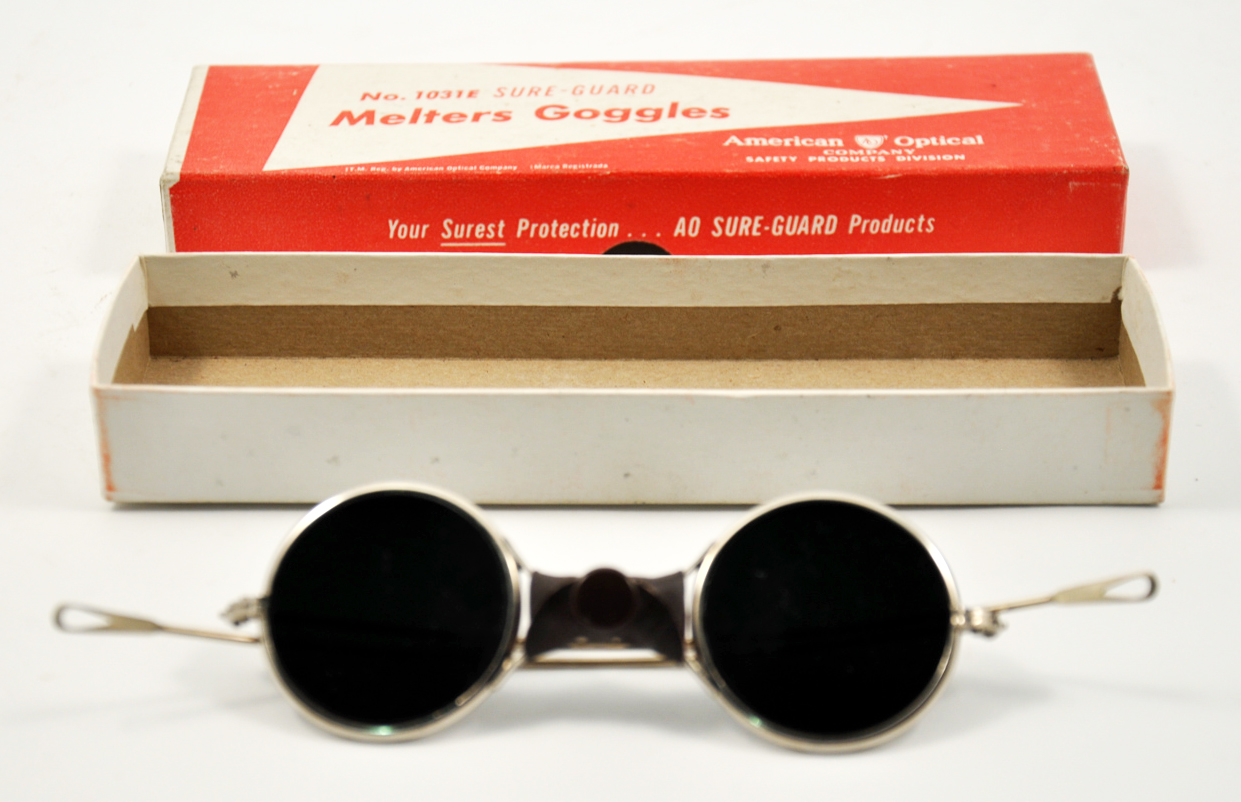 Eye Protection for Visitors to the Steelworks 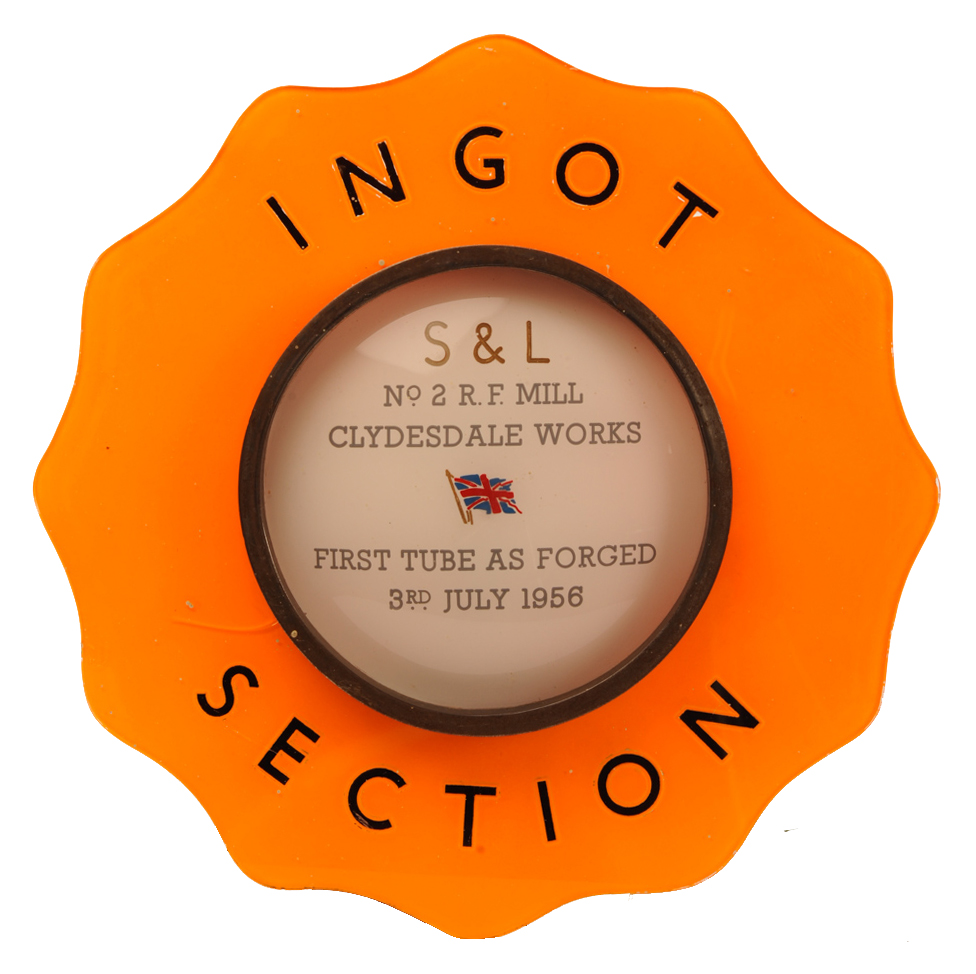 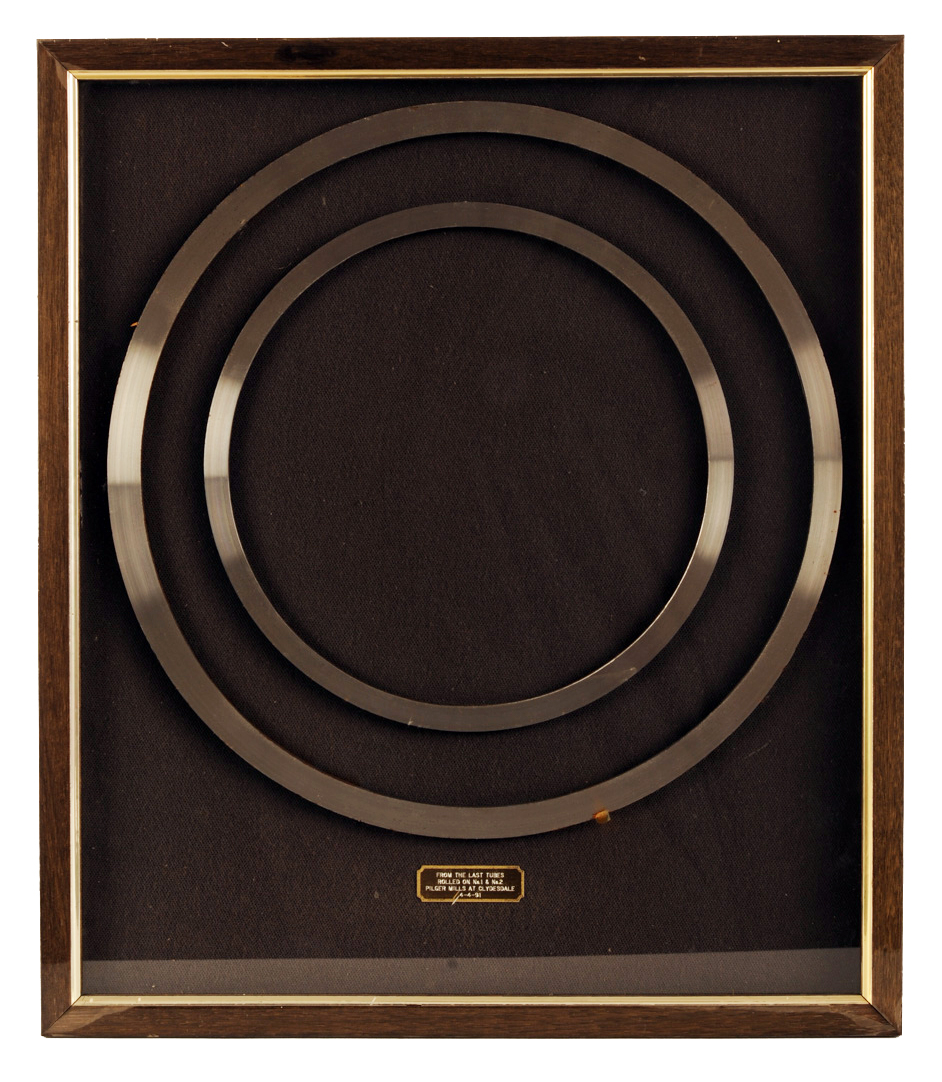