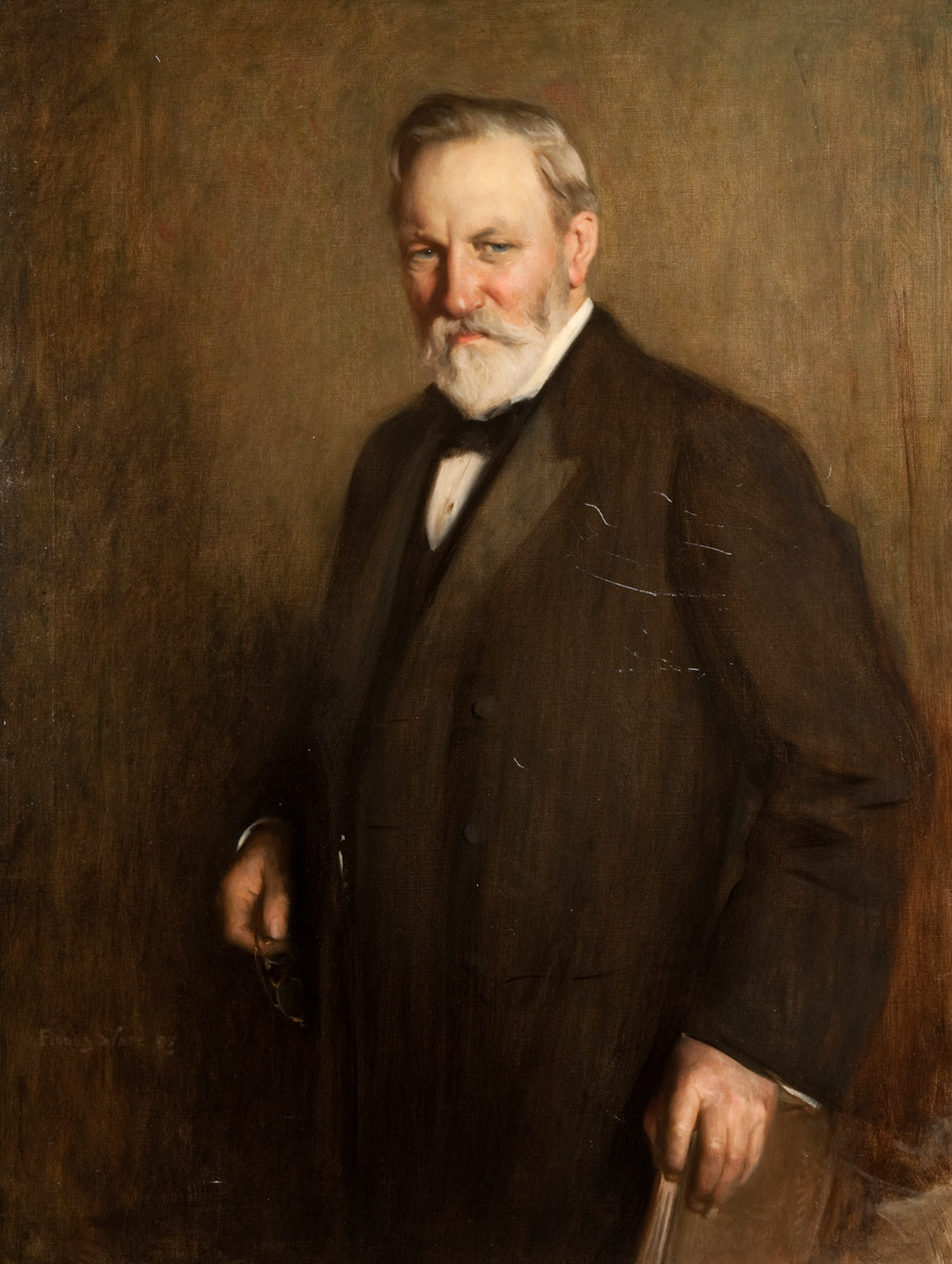 Alexander Findlay founded his engineering firm in 1888. The site he chose was at Milton to the north of Motherwell, on land conveniently next to the railway.

The location of the Parkneuk Works also made sense because it had plenty of space, which was important because it was normal practice for steel structures to be initially assembled at the factory before being dismantled and transported to the client. People living in the north end of Motherwell would become used to seeing huge steel structures appear in the yards of both Findlay’s and the nearby Motherwell Bridge and Engineering Company.

An early visitor to the Parkneuk Works was William Ewart Gladstone, former (and future) Prime Minister. 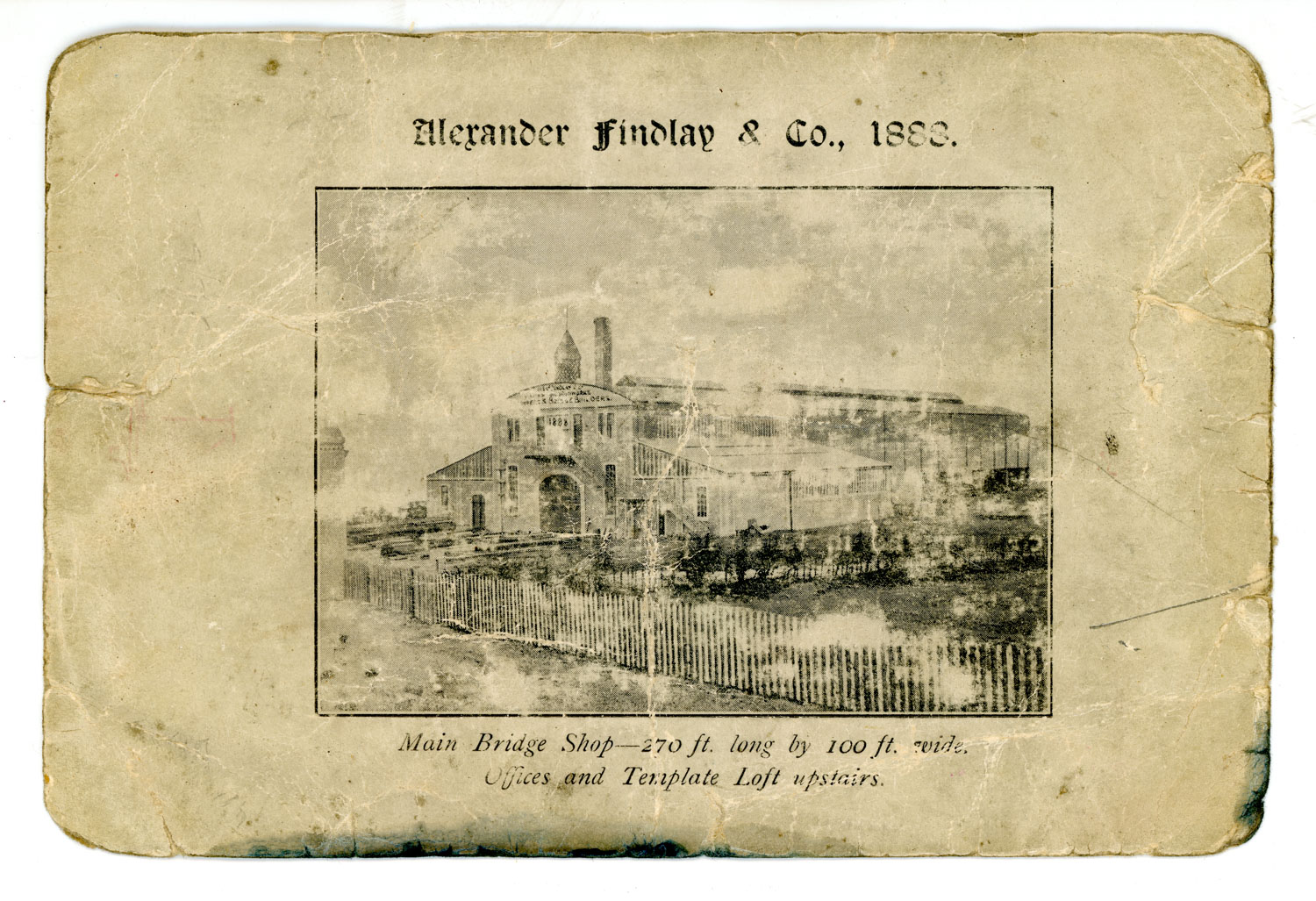 Findlay’s made large steel structures such as buildings and bridges. A 1915 railway bridge made by the firm can still be seen in Crumlin, Northern Ireland while the ʻOpaekaʻa Road Bridge in Hawaii which is made of steel beams forged by Findlay’s in 1890 has been claimed to the only British-built bridge in the United States. 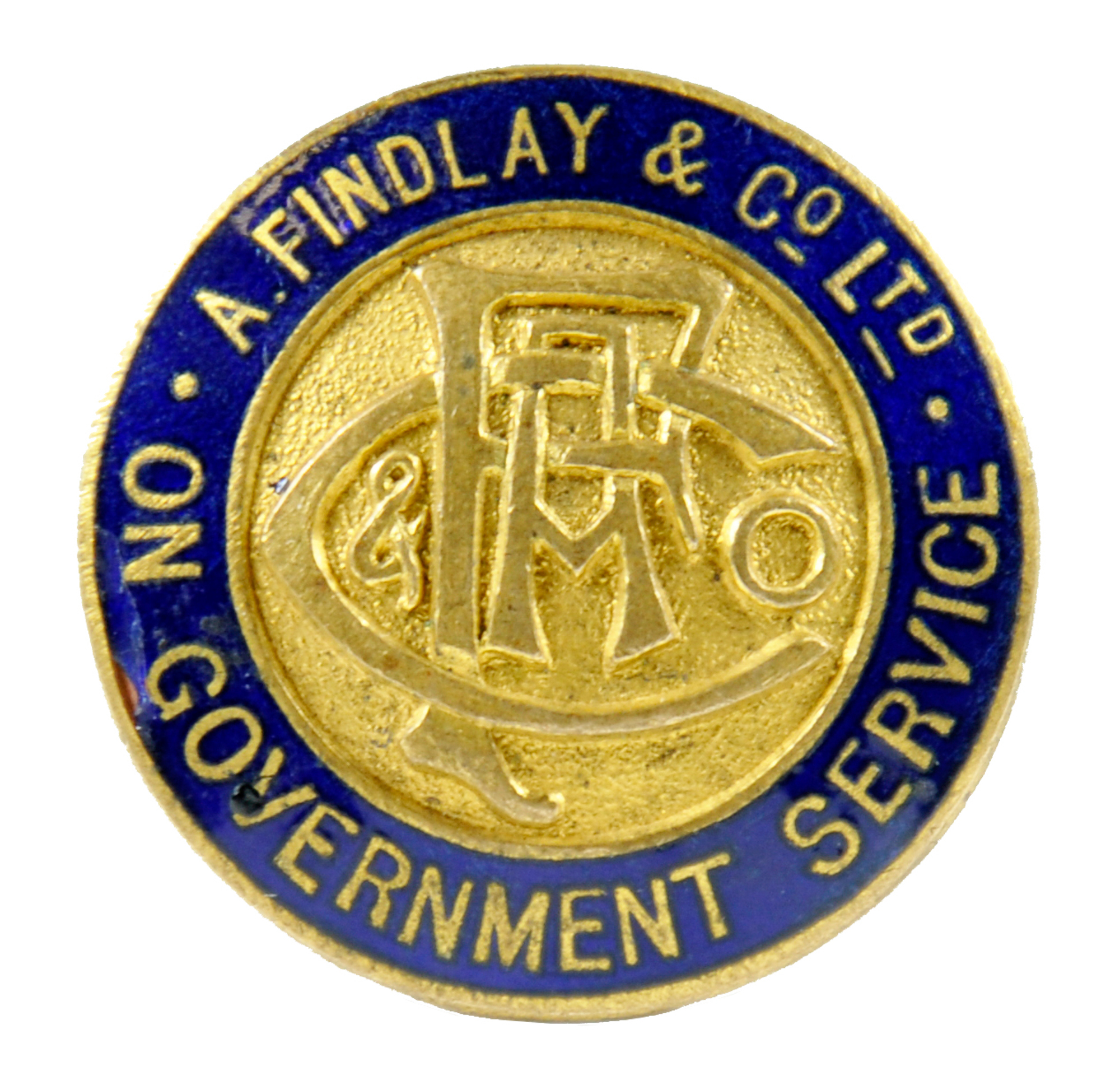 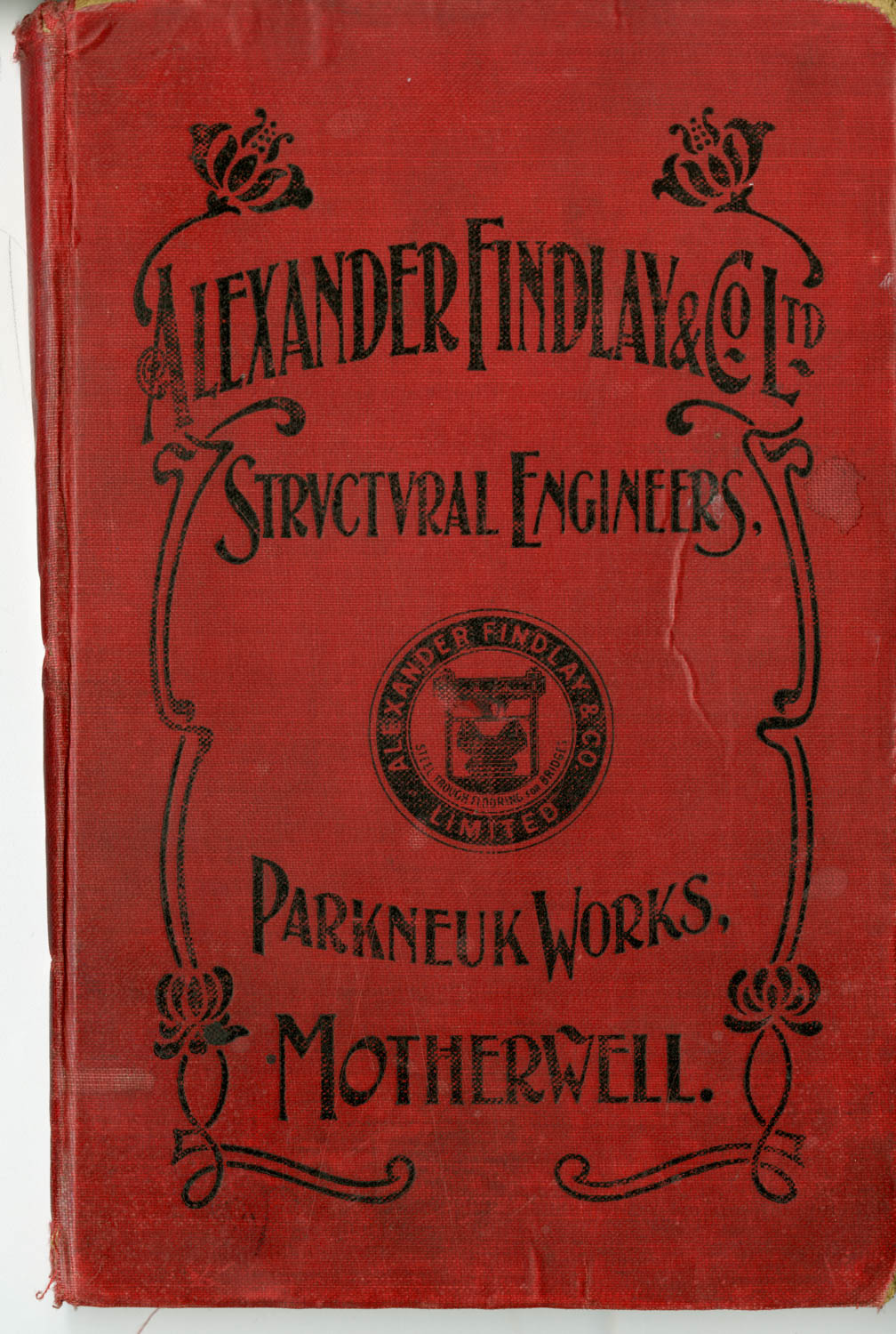 In 1907 and 1908 Findlay’s were heavily involved in the project to construct the venue for the Franco-British Exhibition in London. The exhibition buildings, designed by John Belcher became known as the White City.

At the same time the firm was called upon to supply  structural steelwork for the 1908 Summer Olympic Games after Britain had stepped-in to host the games when Rome pulled out for financial reasons. Constructed on part of the exhibition site, the centrepiece was the 68,000 capacity White City Stadium which hosted the athletics. The stadium was opened by King Edward VII on 27 April 1908. 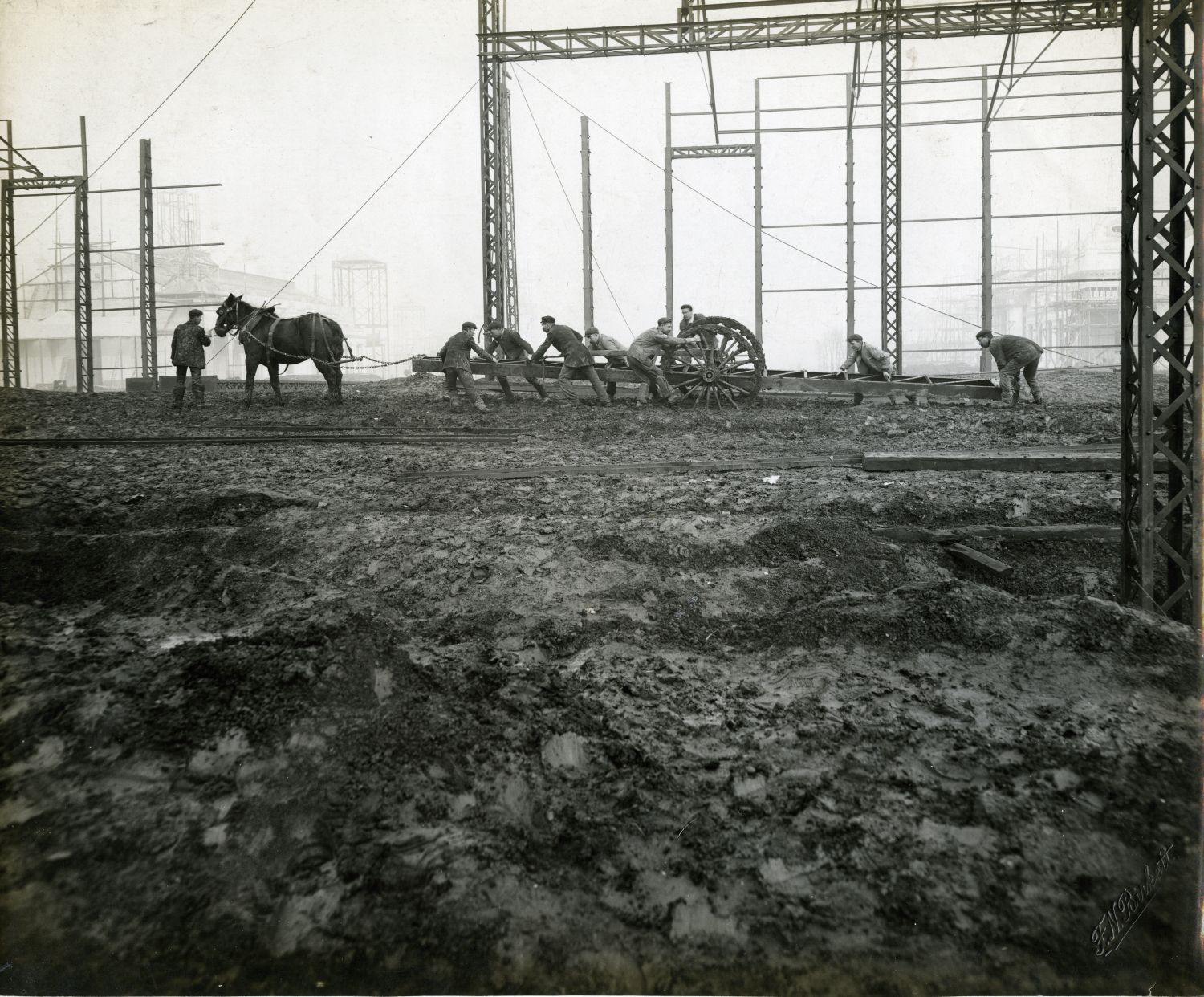 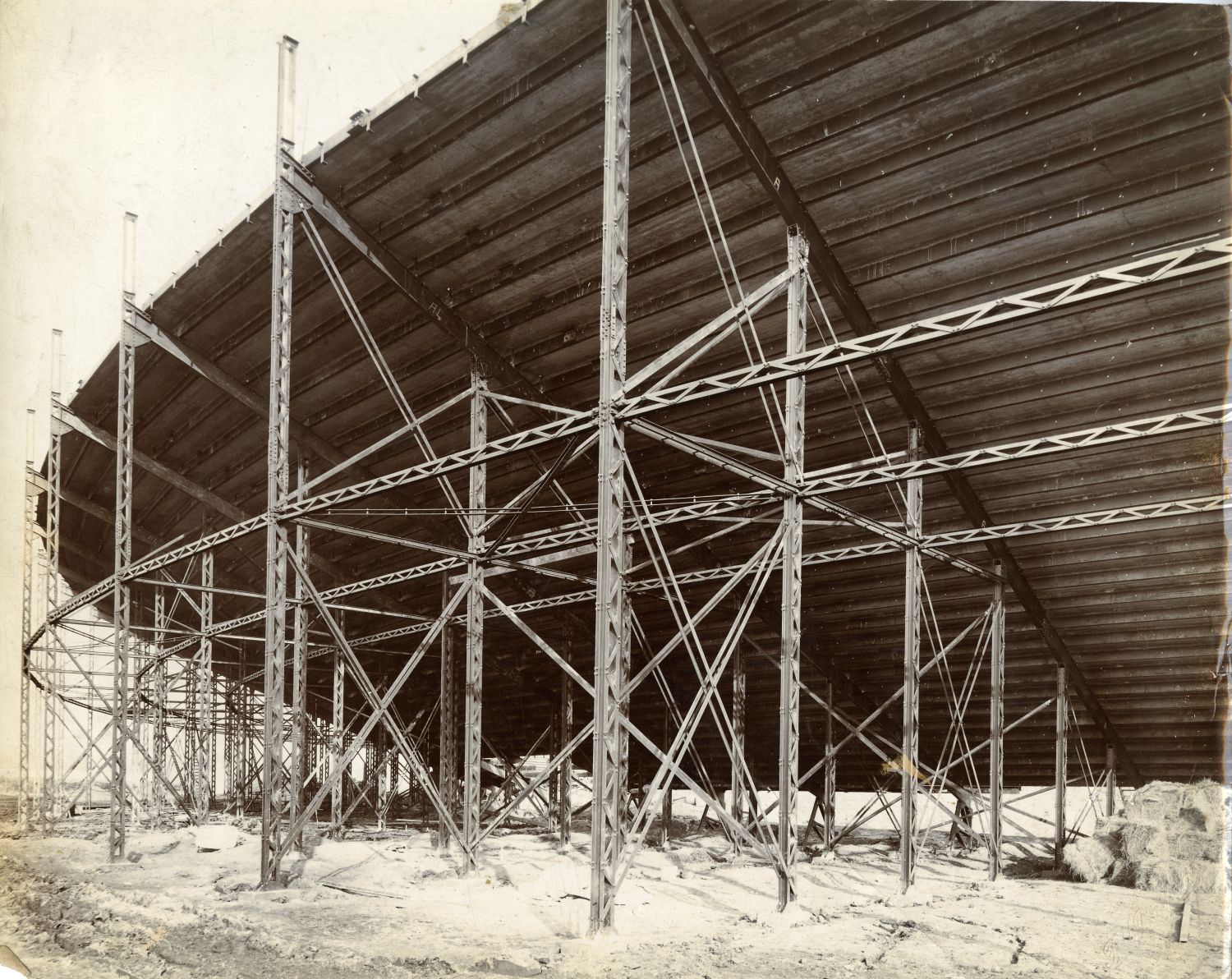 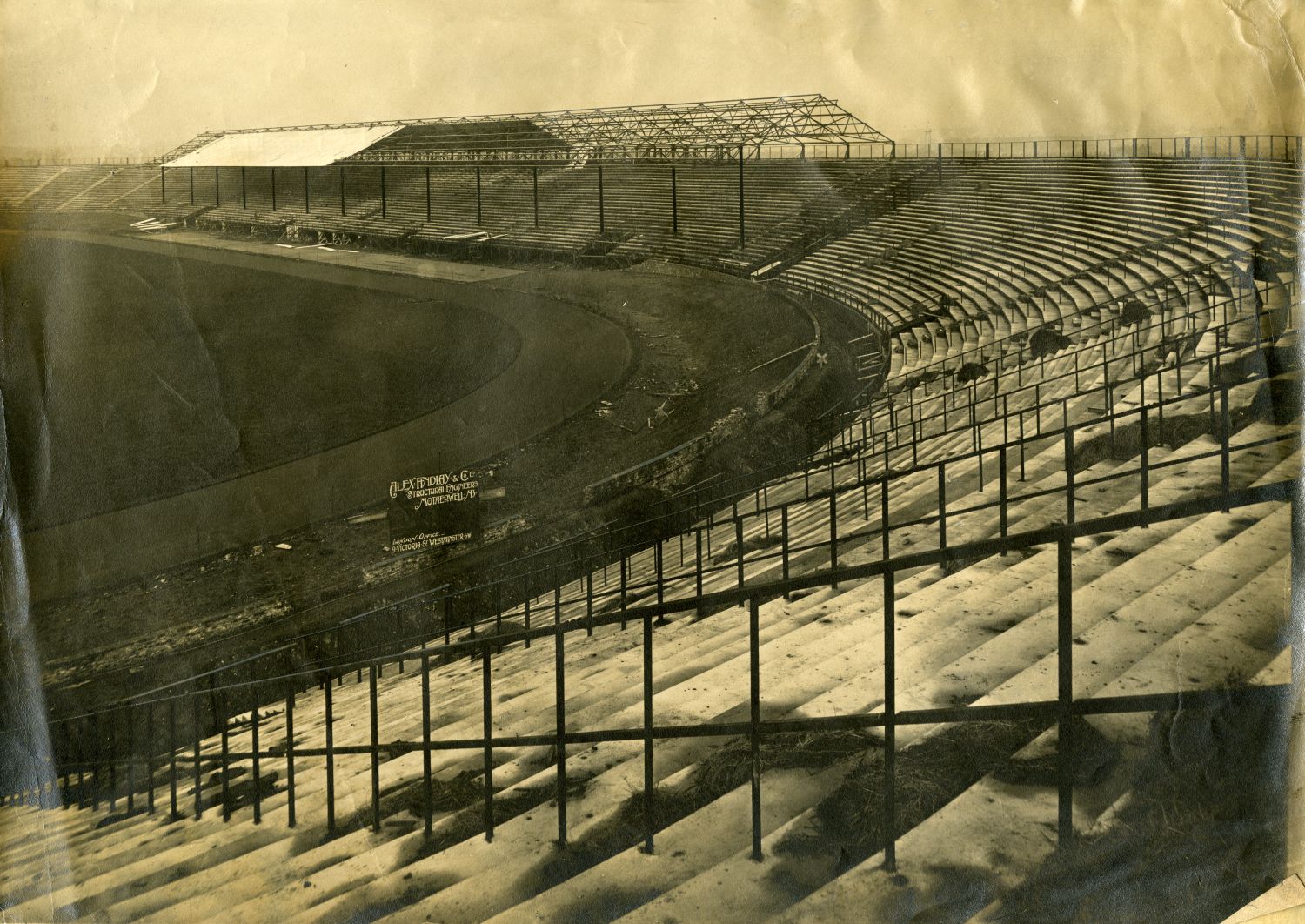 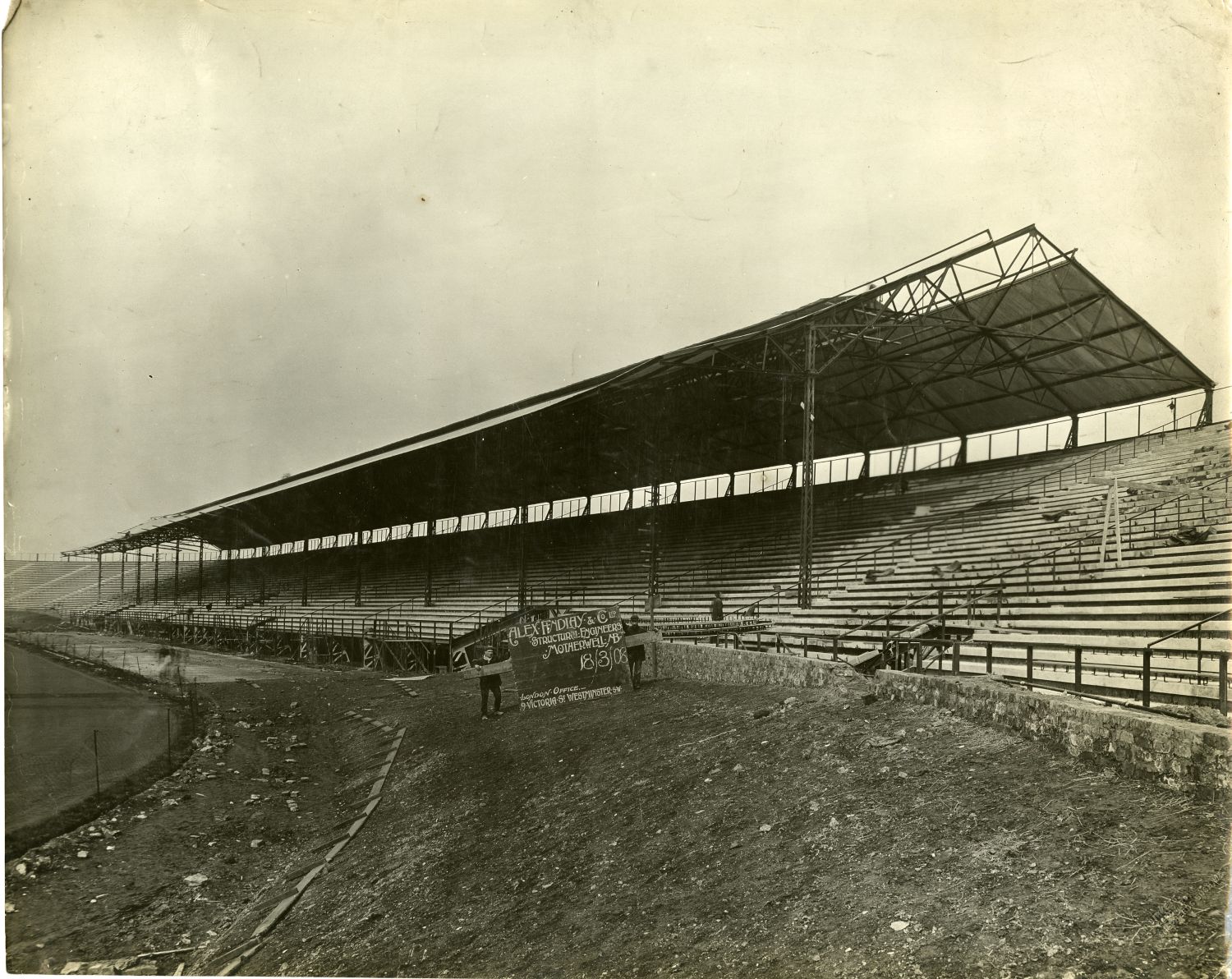 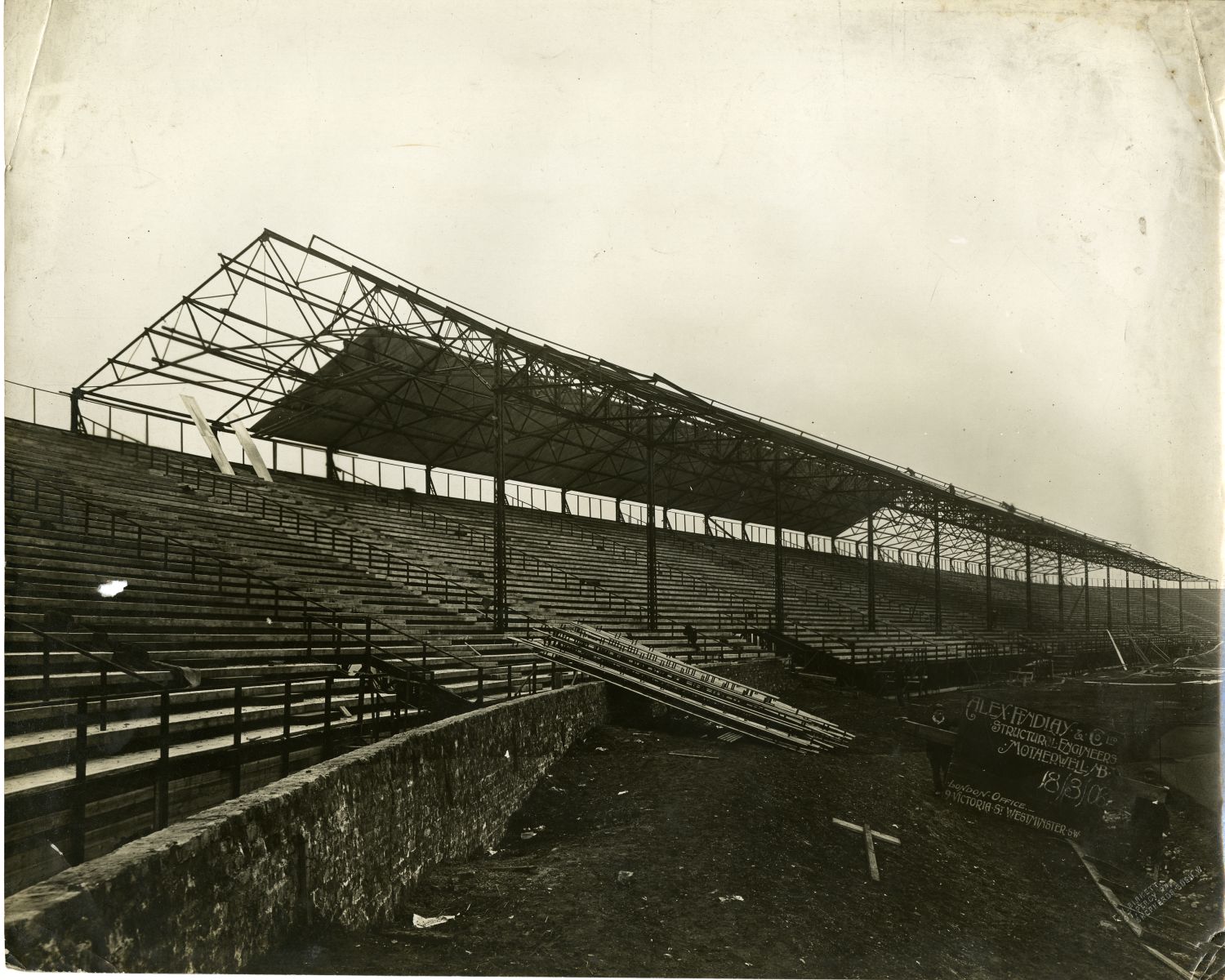 Alexander Findlay himself died in 1921 but the company kept going until the mid-1970s. During the Second World War they were involved in the design and construction of the Mulberry Harbours that were key to the success of the 1944 Normandy Landings. The firm produced most of the pierheads for the harbours.

One of the Mulberry Harbour Pier Heads (or ‘Spud Piers’). These were more than mere floating pontoons – they had four legs that descended to the sea floor to anchor and stabilise them.

One engineer on the project was Campbell Petrie who had started as an apprentice with the firm and during the war was also seconded to design frigates for the Royal Navy before joining Motherwell Bridge where he became a director.

In the 1950s Findlay’s made the steelwork that supported the sphere surrounding the first reactor at Dounreay. The sphere itself was constructed by nearby Motherwell engineers the Motherwell Bridge and Engineering Company.

The firm continued trading well into the 1970s and at least one member of staff went on to help set-up Summerlee Museum in the 1980s. 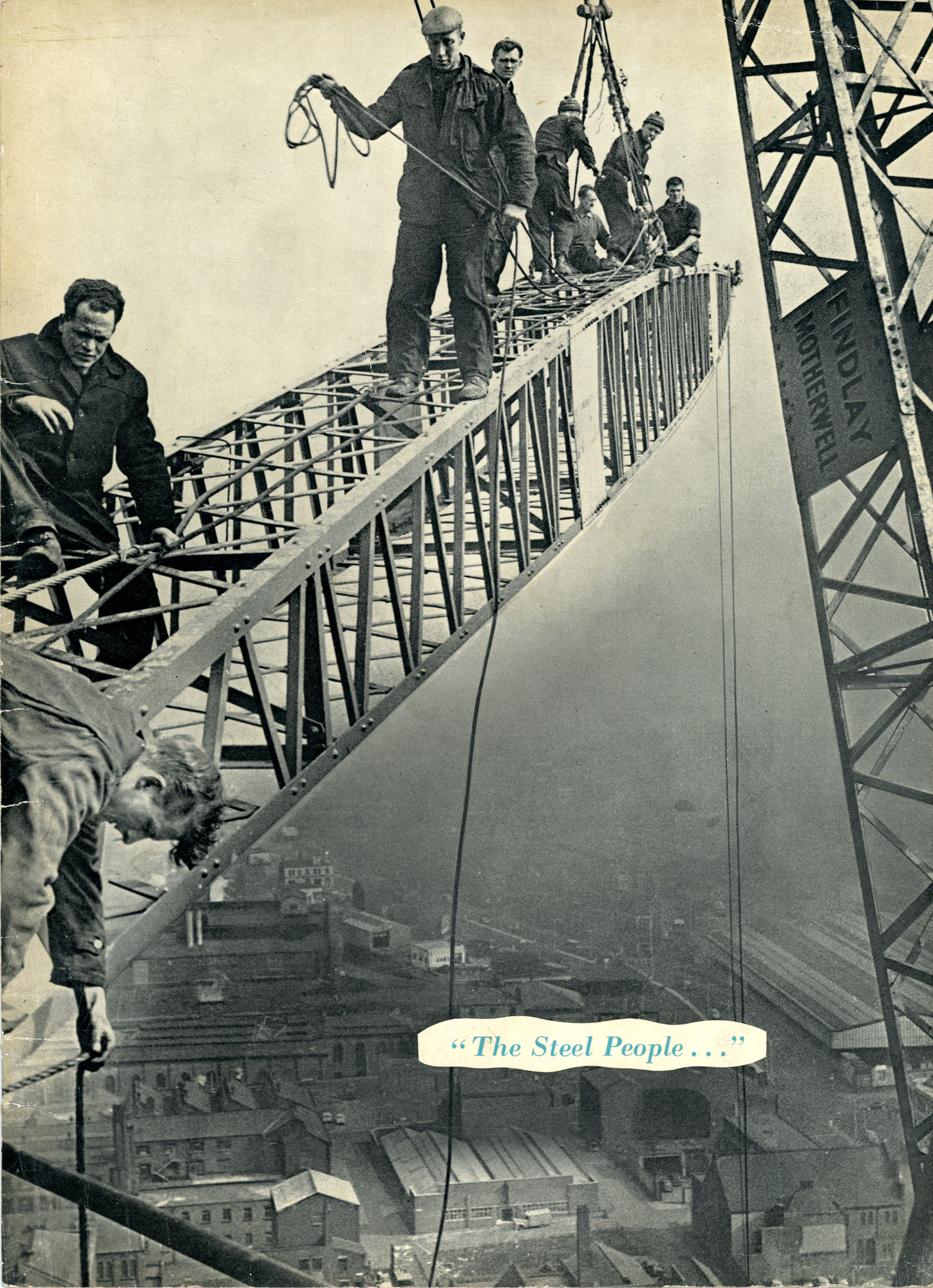