Victoria Butt, a Material Culture and Artefact student at Glasgow University, investigates the history of one of the oldest items in the collection of historic banners in the museum collection.

It is a rectangular banner, painted in a landscape format on one side only. It measures at 140cm tall and 167cm wide; making it one of the larger banners in the collection in t The he collection at Summerlee. In the middle of the banner there is large writing which reads today: ‘EAST MUNKLAND FOR REFORMATION IN CHURCH AND [?] ACCORDING TO THE WORD OF [?] AND OUR COVENAN[?]’ The question marks reflect missing letters or words that have worn off or degraded over time. Depicted at the bottom of the banner is a fist holding a dagger upright. At the top of the banner there is a picture of an open bible. The bible is open and reads the passages of Psalm 86 and 87. This must be significant in some way. And at the top right corner there is a large circular motif with a thistle in the centre and a horse-shoe shaped ribbon, with the words ‘NEMO . ME. [?] . [? ?]’. 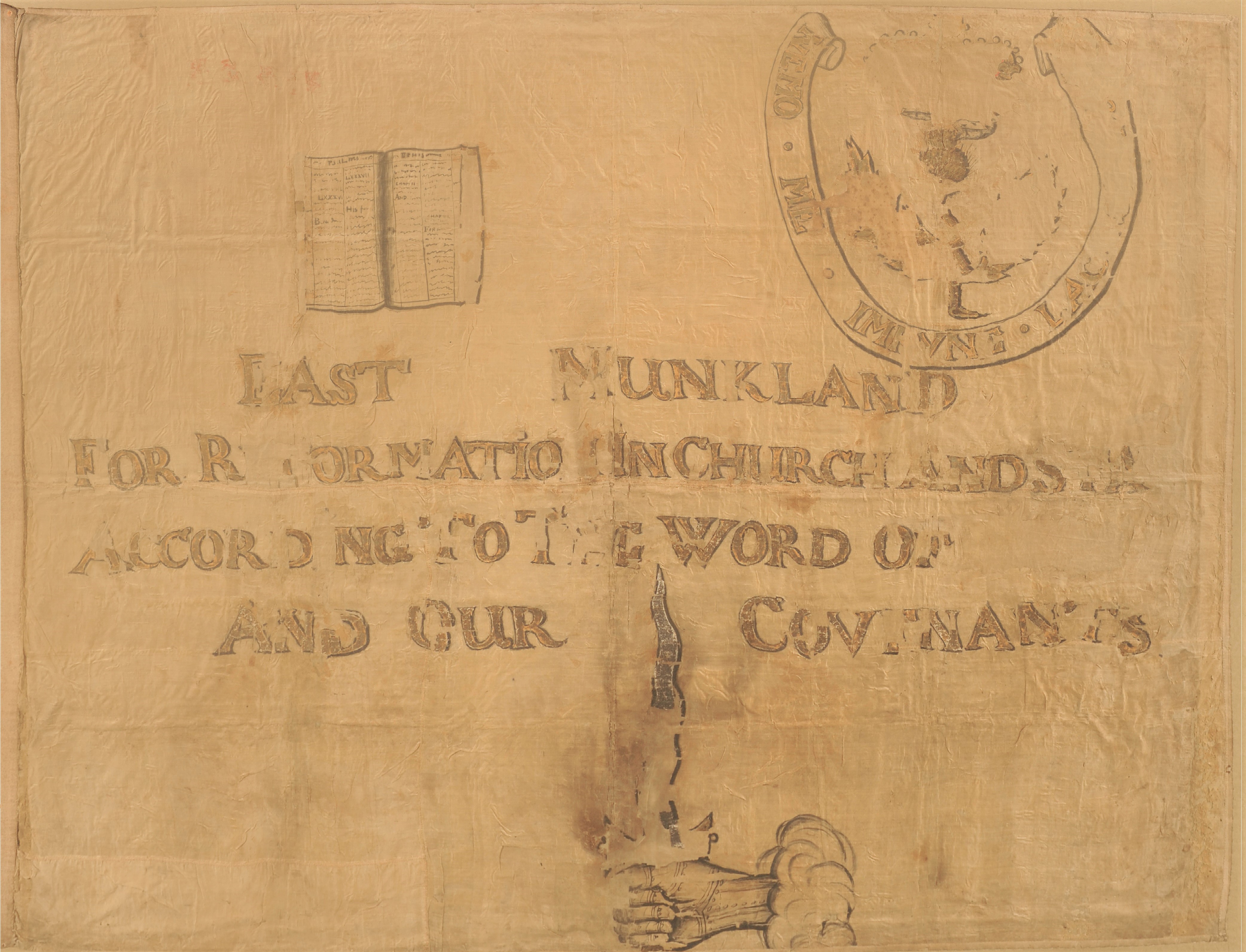 The lives of material objects and artefacts can be more complex and enthralling than we might at first think. The life of an object, like this banner, is more than just; beginning, middle, and end.

Before this banner came to life in a material sense, it was an idea; an abstract concept that was thought up for a specific purpose. We do not know who made this banner, but it is of quite a high quality, made of a single layer of silk and hand-stitched together. There is also a pole-sleeve which tells us that it was made to be held high and waved in a processional way.

The life: fulfilling its intended purpose

The purpose of this banner was to be carried at the battle of Bothwell Bridge in 1679, a fight between the Covenant rebels and the Government Officials. The Covenanters were a Scottish Presbyterian movement that was particularly strong in the area of Lanarkshire. This battle was one of the biggest defeats for the Covenanters and resulted in over a thousand members being held captive in Edinburgh. This made it one of the most important events of the movements history. This is attested to by the high quality of the banner that would have been paraded down through the countryside, held by the Scottish rebels. The banner was carried by a man called John Main, laird of Ballochnie; a small and bleak farmland situated near the town of Airdrie that made up part of the Monklands. The large banner would have acted as a rallying point for the followers heading to battle.

In terms of the biography of this banner, most of its ‘life’ has been its ‘afterlife’. That is if we are to think about its life as fulfilling its original purpose of being carried as a battle-standard, everything and everywhere the banner went after 1679 has been its afterlife.

Its continued life after its original intended purpose points to its importance. John Main was one of the few who escaped the battle, but died a few years later. The name John Main appears on a tombstone found at Glasgow cathedral that bears the names of nine Covenanters who died between the years 1666 and 1688. Could this be the same John Main? We cannot know for sure, but it is a likely assumption given the location and date of the funerary monument.

The banner stayed in the Main family, with its first mention after this coming from the memoirs of a Reverend James Begg, born in the early 1800s. He writes of this banner in great detail and awe – showing the pride he has in his immediate local history. What’s more, is that he says what was written on the banner – words that have now worn off. According to him the banner reads: ‘EAST MUNKLAND FOR REFORMATION IN CHURCH AND STATE, ACCORDING TO THE WORD OF GOD AND THE COVENANT’. And he writes that the motto on the ribbon is ‘NEMO ME IMPUNE LACESSIT’, Latin for ‘NO ONE PROVOKES ME WITH IMPUNITY’. This is the motto of the Scottish kings and therefore carries with it a lot fo honour and prestige. This account is of great importance as it gives us a fuller picture of what the banner may have looked like back then.

Also included in this account is a mention of restoration. 200 years after it had fulfilled it original intended purpose it still had a life and was deemed important enough to be restored and looked after.

Finally, Rev. James Begg also notes that the colour of this banner is “handsome yellow”, similar to the colour it is now. However, we know from the recent conservation report, that this banner was originally blue and has since faded into more of a beige colour. We can presume that this degradation happened then, within the first 200 years of its life.

In the 1870s it is said to have been a main object of display within a pub in Airdrie, in which the owner was a direct descendent of John Main. We can imagine the pride, honour and history this banner brought to the local. We have to wonder whether stories were continued to be told about the life of this banner over a few pints.

Gifted to the Community

It hung in this pub until it was gifted by the Main family to Airdrie Museum in 1895. From the 1920s it was hung in Airdrie library where it resided until it came into the hands of North Lanarkshire Museums in 1999. The condition of this banner upon arrival to North Lanarkshire Museums was incredibly poor and it was instantly clear that it needed a huge amount of work and repair and restore it as its materialy had borne the brunt of time as well as very poor conditions (including being hung direction above a heated radiator!).

It has been repaired and restored as much possible and now resides back in the Airdrie Library lying flat in a temperature and light controlled case so as to not decay it condition any further.

The banner is on display in Airdrie Local Studies, Airdrie Library

The continued life and multiple restorations of this banner attests to its importance not only within the local area but also for the wider history of Scotland and England in general. It is a very rare example of religious demonstration that survives from this period and is significant on a national level.