The stretch of canal at Summerlee Museum is one of the site’s hidden corners. Although now a peaceful green oasis in the middle of Coatbridge it was once a noisy and dirty centre of industry.

Just off the canal opposite the site of the Summerlee Iron Works is the large pool of water known as Howes Basin. Today the only traffic entering this large, oval-shaped pond are ducks and swans. However it was once an important transport connection between the Monkland Canal and Lanarkshire’s first public railway, the Monkland & Kirkintilloch Railway. 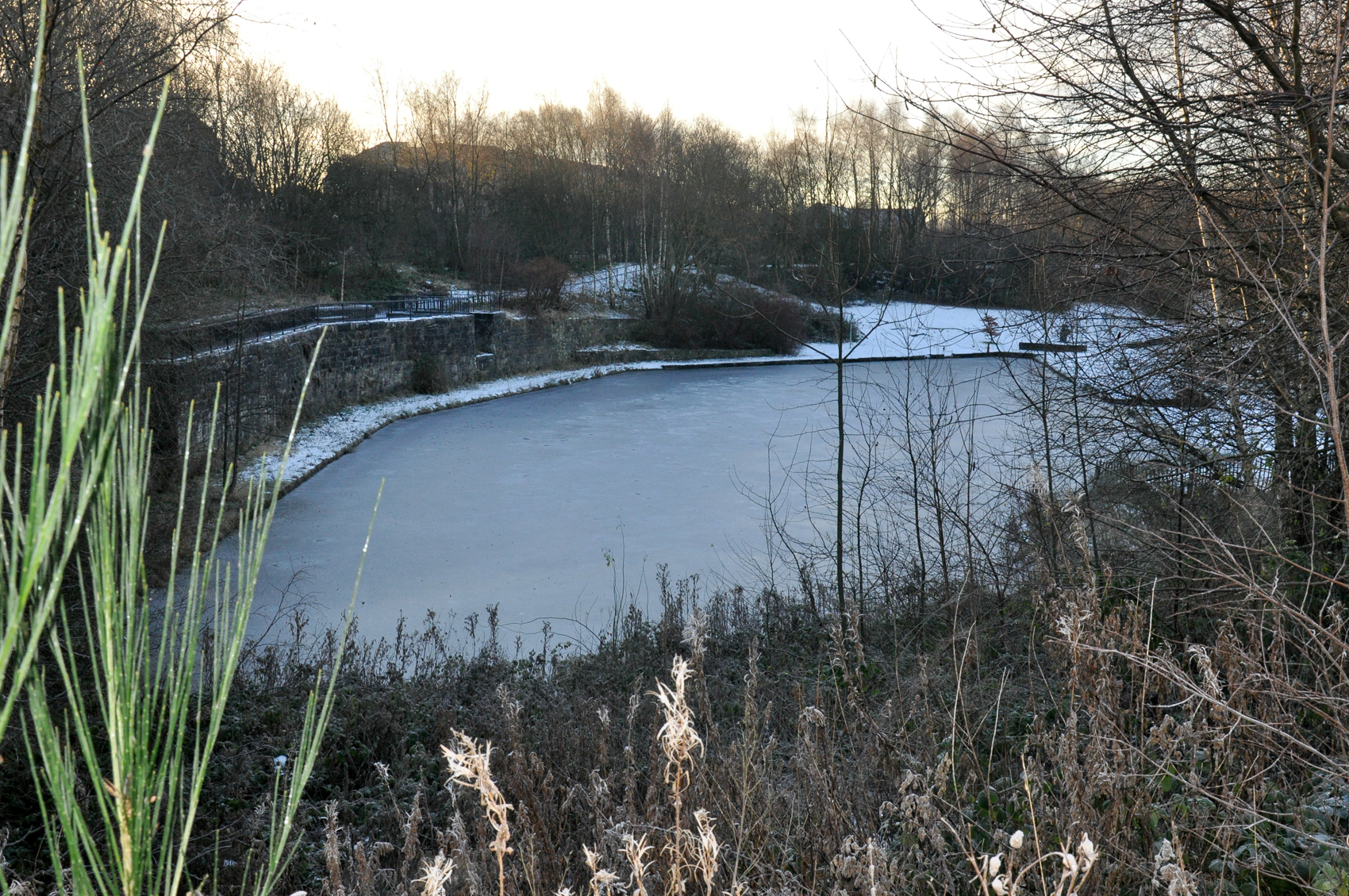 “A hollow or low-lying piece of ground”: a frozen Howes Basin seen from above in December 2012. The coal drops are on the left with the site of sidings for coal-laden railway waggons above.

Howes Basin isn’t named after a person. This place just below the junction of Gartsherrie Road and Sunnyside Road (or Sunnyside Street as it used to be) was known as The Howes, which fittingly means a hollow or low-lying piece of ground.

The Howes was an important location because here the Monkland and Kirkintilloch Railway met the Gartsherrie Branch of the Monkland Canal. It was also very close to Sunnyside Junction where the M&KR connected to the Ballochney Railway which opened two years after it in 1828.

When passenger services started in 1831 a station was made at the Howes, possibly on the railway junction. This was a passenger halt for only twenty years so doesn’t appear on the first edition Ordnance Survey map.

The Railway & the Canal 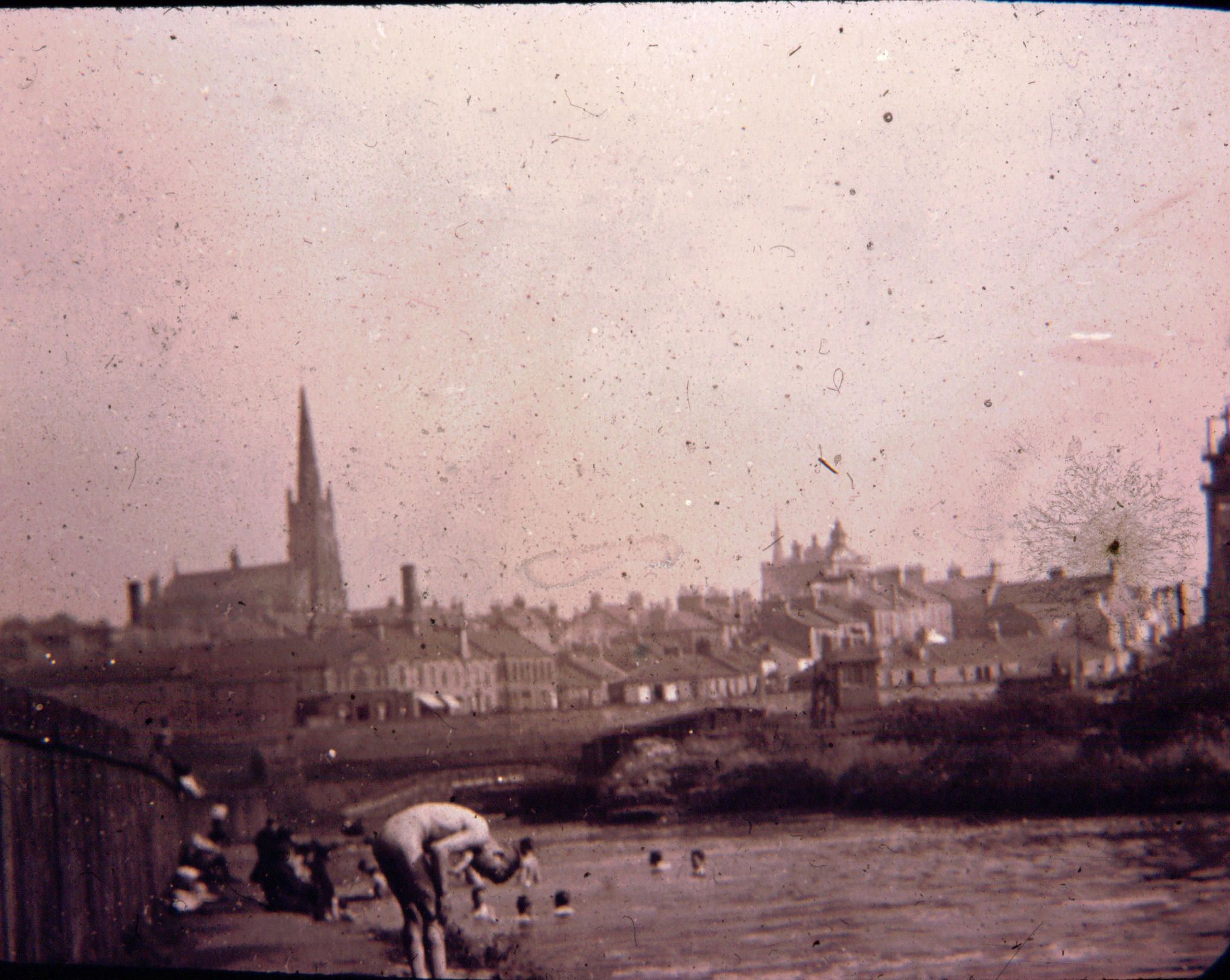 Swimming in the Canal at Howes Basin, 1937 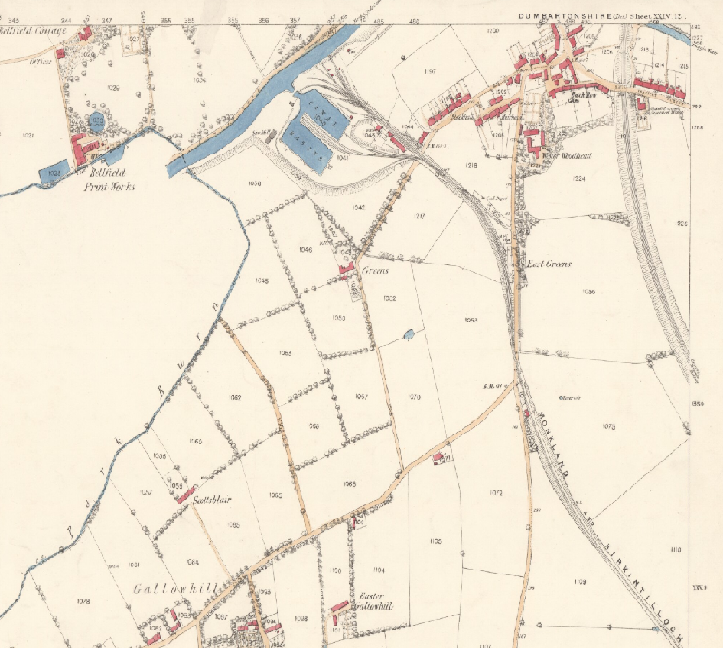 The northern end of the Monkland & Kirkintilloch Railway met the Forth & Clyde Canal at Kirkintilloch Basin. From the 1st edition OS map, surveyed in 1859. A screenshot from the National Library of Scotland’s online maps.

Coal was carried in open-topped, wooden-sided waggons. The waggons had doors at each end for emptying the coal out of them.

The railway curves around the top of the slope above the eastern side of Howes Basin. Built into the lower part of this slope is a steep wall built of dressed sandstone blocks. This was where the coal was transferred from the railway to the canal.

Let’s have a look at a map: 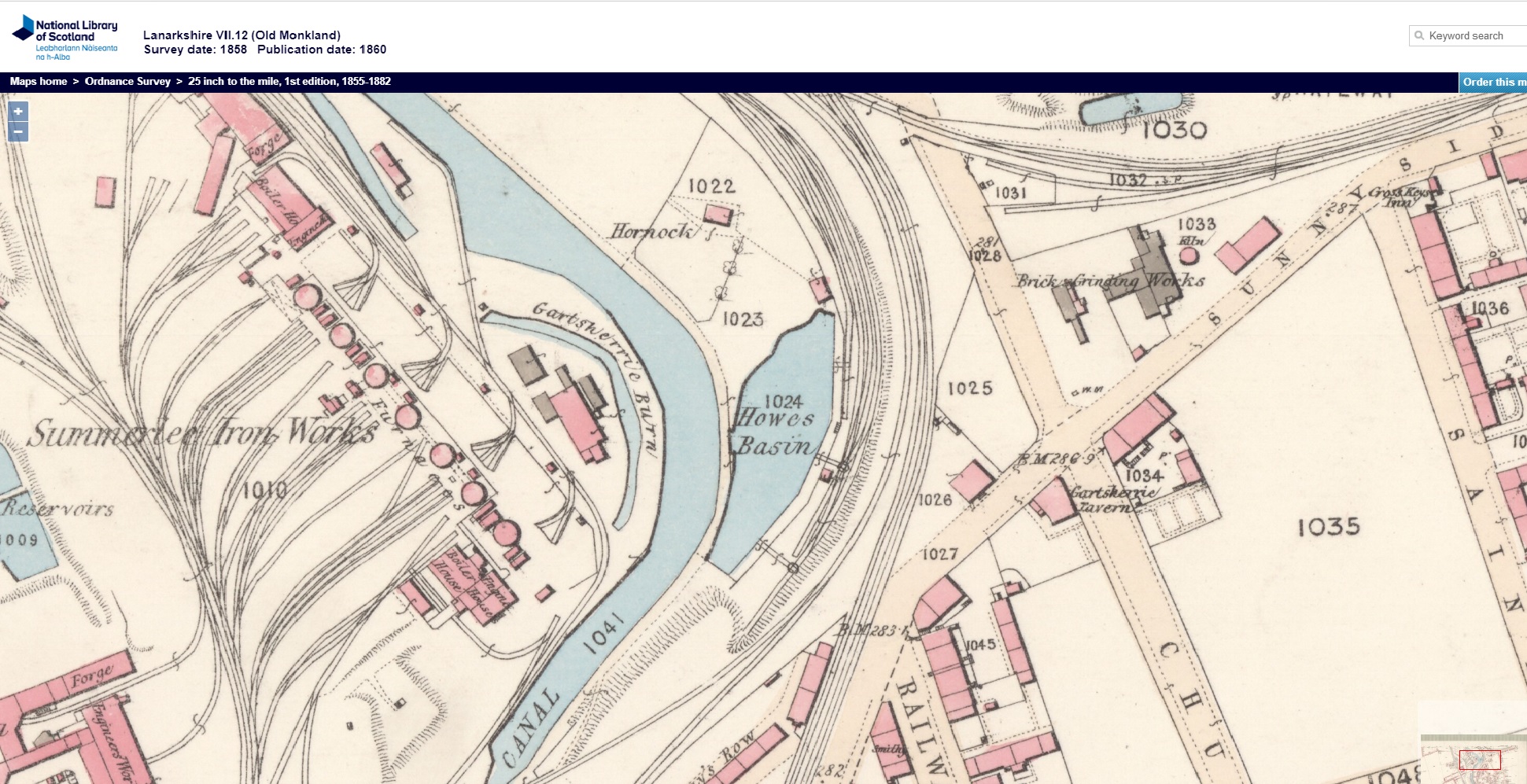 Howes Basin surveyed in 1858 from the first Ordnance Survey (courtesy of the National Library of Scotland).

If we take a closer look at the railway sidings above the basin it is clear that there were three coal drops. Only two are visible today and those are the northernmost ones. 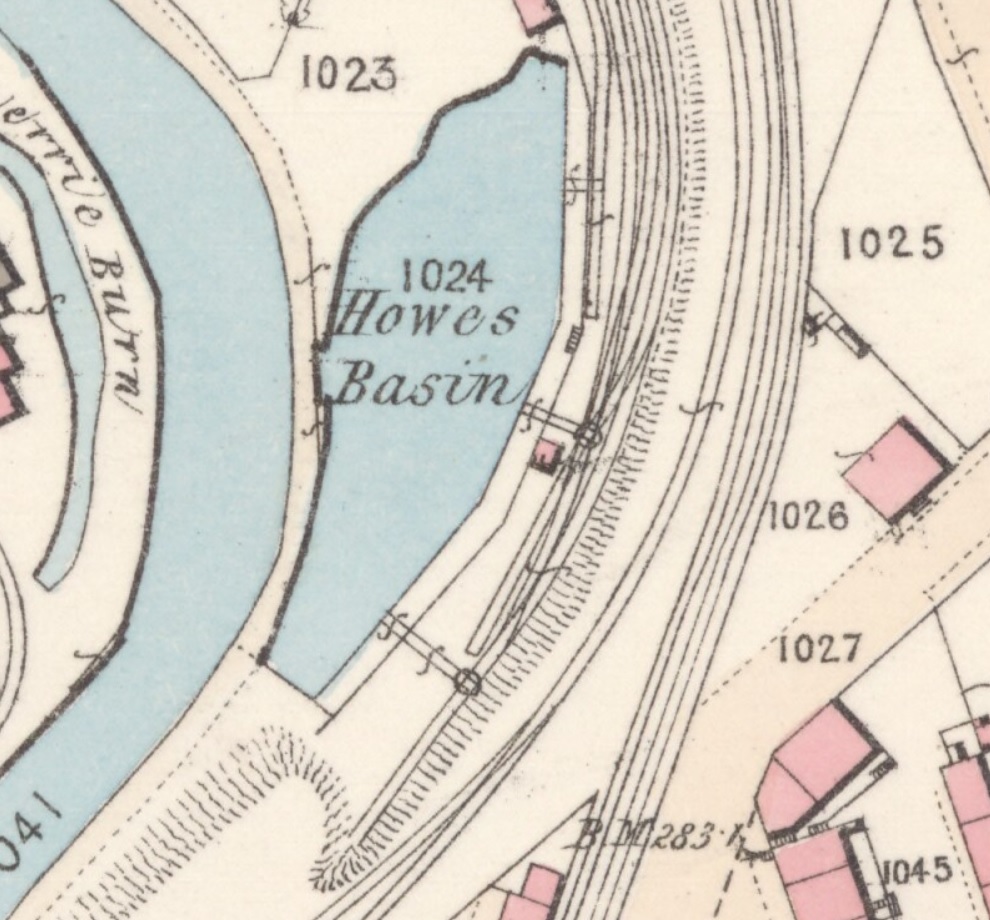 This detail from the 1858 OS map shows the railway sidings leading to the three coal drops. Notice how each coal drop has its own siding. These extend beyond the coal drop so that each coal-laden waggon in a train can be moved onto the turntable in turn. Once on the turntable the waggon would be de-coupled and rotated 90 degrees before being rolled onto the coal drop.

How did the Coal Drops Work?

There are no known photographs of the coal drops in use. They appear to have been abandoned before 1900 judging by the map evidence.

Today the Howes Basin coal drops appear as rectangular notches cut out of the supporting wall above the canal. These notches make shelves a metre or so above the level of the towpath. It is most likely that extending from each notch there would have been a wooden platform carrying railway lines out over the canal; this may have taken the form of a tilting platform.

The stonework was restored when Summerlee Museum was built in the 1980s. New coping stones appear to have been added and these may obscure evidence of the tipping mechanism. 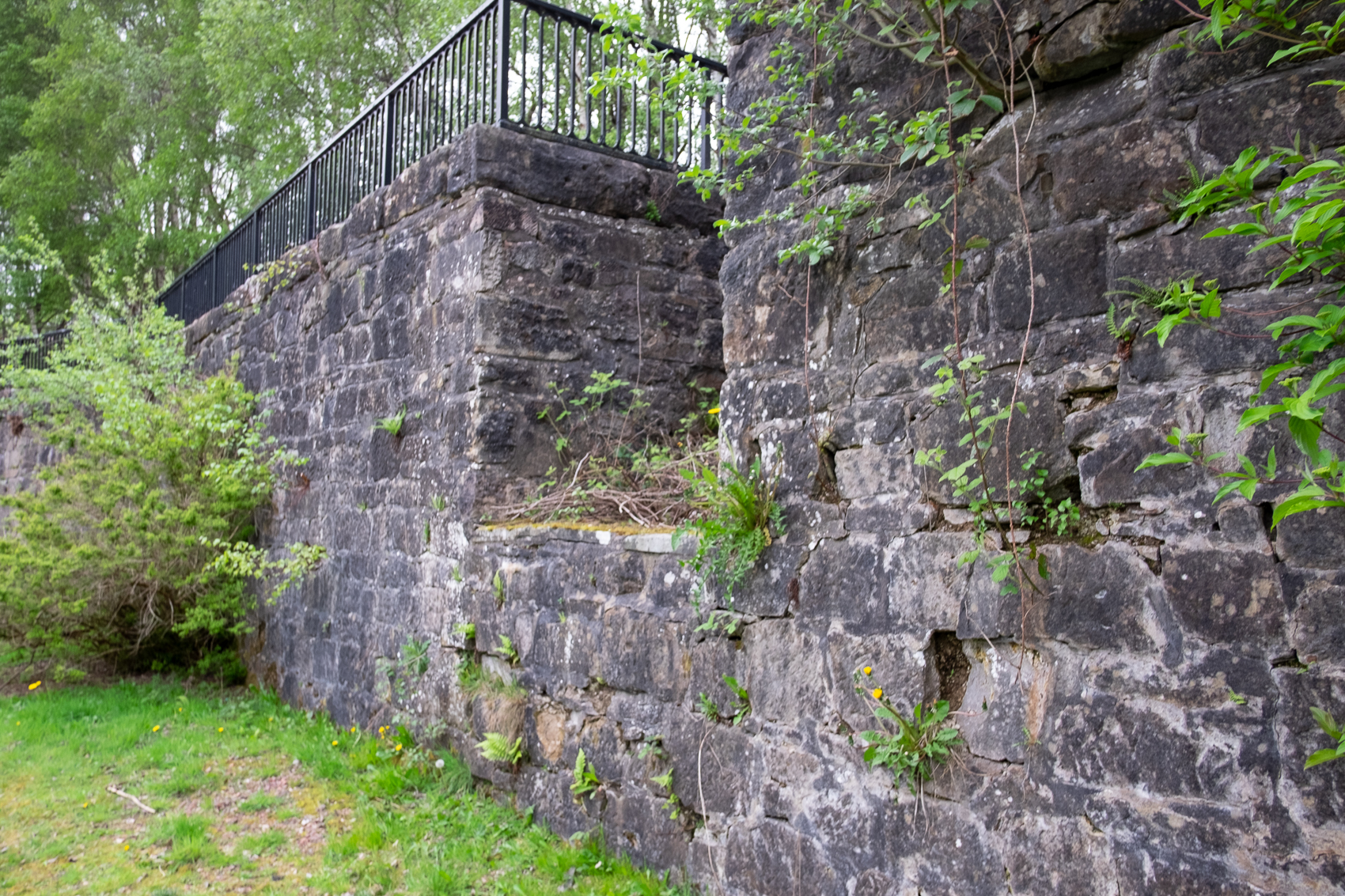 Site of the northernmost coal drop at Howes Basin. Photographed in 2019.

Waggons may have been emptied either by being tipped up so that the coal slid out of a door in the end of the waggon or kept level and the coal shovelled out. If the waggons were tipped it is likely that the notches under the jetties would have housed the tipping mechanism.

Either way, the coal would fall into a waiting barge below. This would have been a labour-intensive business because each waggon of a train would have to be de-coupled in turn and moved onto the turntable and rotated by hand before being pushed out above the canal. The waggon would freewheel over the wooden jetty, carefully controlled by a ‘Brakesman’ who used a lever to work a simple brake.

The photograph below, taken in 1854 is an incredibly rare early depiction of a coal drop. It shows Cockenzie Harbour (rebuilt in 1830) which was at one end of the Trannent Waggonway. At the harbour coal was transferred onto boats. You can see one of the waggons on the pier behind the three people. 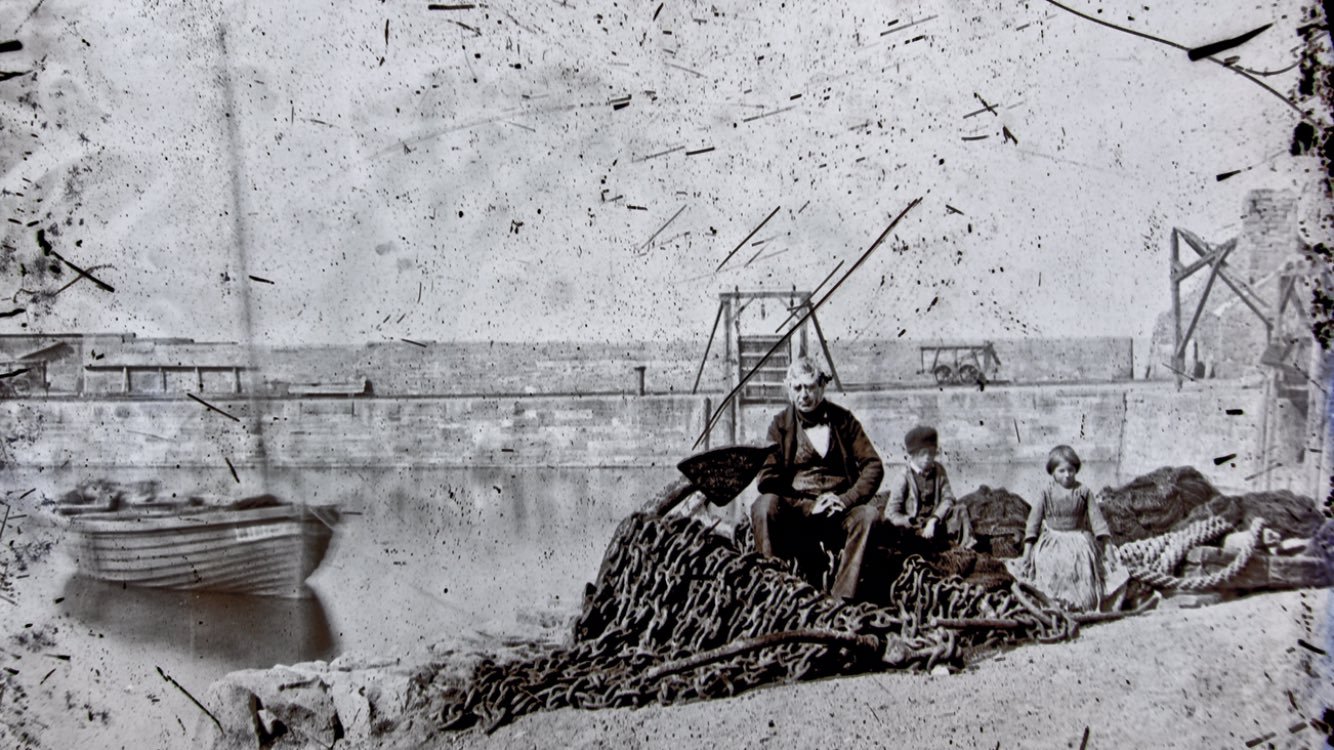 Two coal drops are visible in the photograph. One is behind the man’s head but the one we are interested in is on the extreme right. You can see how there is a notch cut into the harbour wall, very similar to the notches in the wall at Howes Basin. It contains a tilting platform for tipping waggons downwards towards a boat tied-up below. In fact it looks like there may be a waggon on it in the picture. Another photograph from the 1800s that shows this coal drop was recently discovered in the McKinnon Collection.

The waggonway at Cockenzie Harbour was excavated between 2017 and 2019. Archaeologists discovered the remains of the turntable mechanism where waggons were rotated 90 degrees before being rolled onto the coal drop: 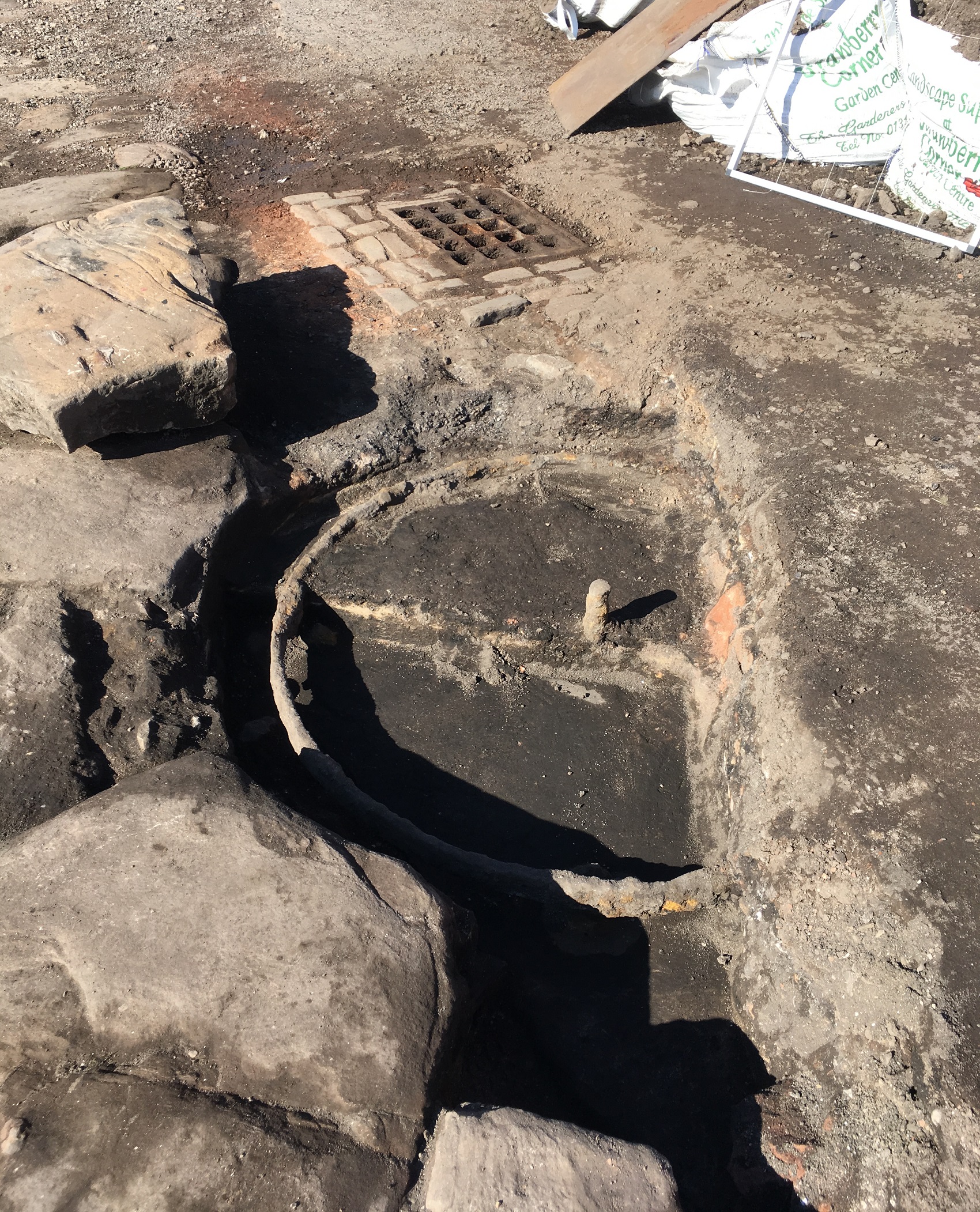 The remains of the turntable mechanism at Cockenzie during excavations in 2018. The turntable would have rotated on top of this circular iron base (photo: Justin Parkes).

The stretch of the canal within Summerlee Museum is now a Scheduled Monument. Hopefully in the future we will be able to commission some archaeology at Howes Basin to learn more about how the coal drops worked. 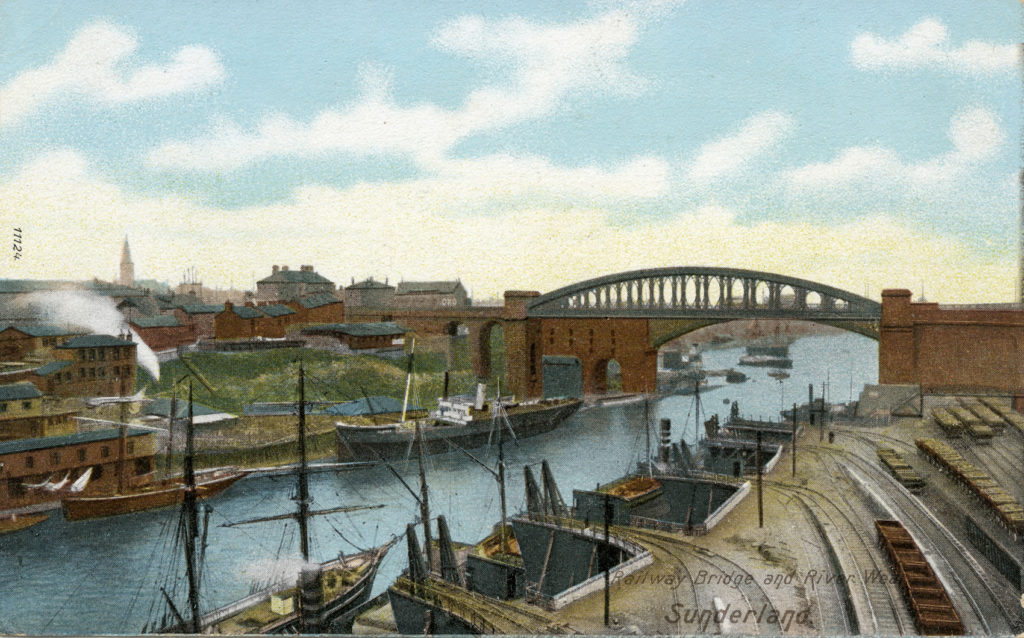 Coal drops at Sunderland, around 1900.