Far from being a happy ‘Home Fit For Heroes’, inter-war Britain was a sharply polarised society amidst an even stormier Europe.

North Lanarkshire was one of the most densely industrialised areas in Britain. Around these industries had grown communities that were every bit the reflection of the capital versus labour divide out of the workplace as they were in it. 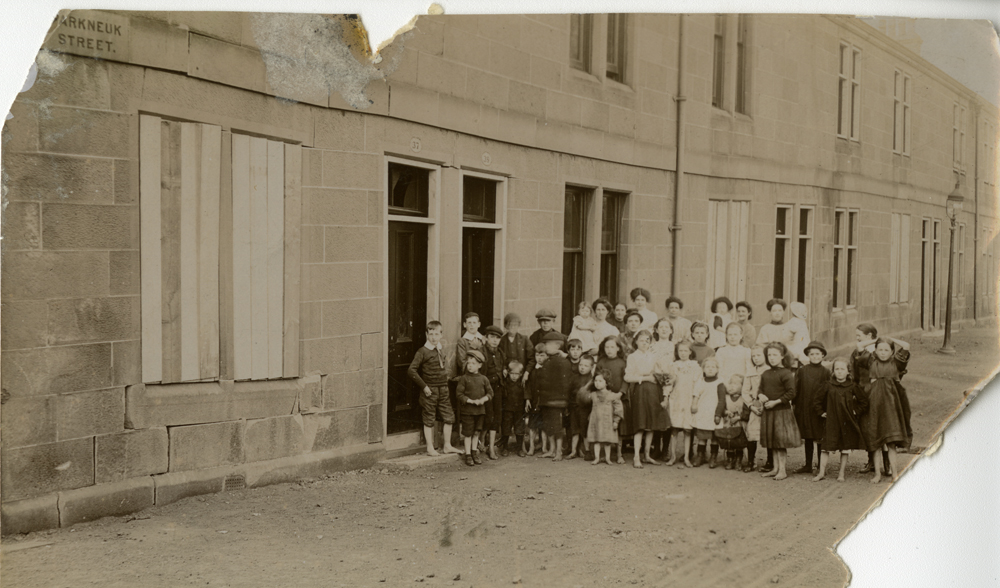 Working-class politics in Lanarkshire, as elsewhere in Scotland, were shifting leftwards from the Liberals and Unionists toward the emergent Labour and Communist Parties. In the workplaces, trade unions were pushed to greater confrontation with employers.

In this series we’ll look at objects that tell us something about how people in interwar North Lanarkshire became politically involved to challenge disenfranchisement, poverty, and unemployment.

1918 had brought both the end of the First World War and the extension of the vote to the majority of working-class people in Britain. Now all men over the age of 21 and women over the age of 30 could vote, a quadrupling in the size of the electoral franchise.

Revolutions in Russia the previous year had overthrown Tsar Nicholas II and resulted in the world’s first communist government. Elsewhere, the old royal families of Germany and Austria-Hungary had been ousted and democratic republics popped up all over Europe. Politics were changing fast. 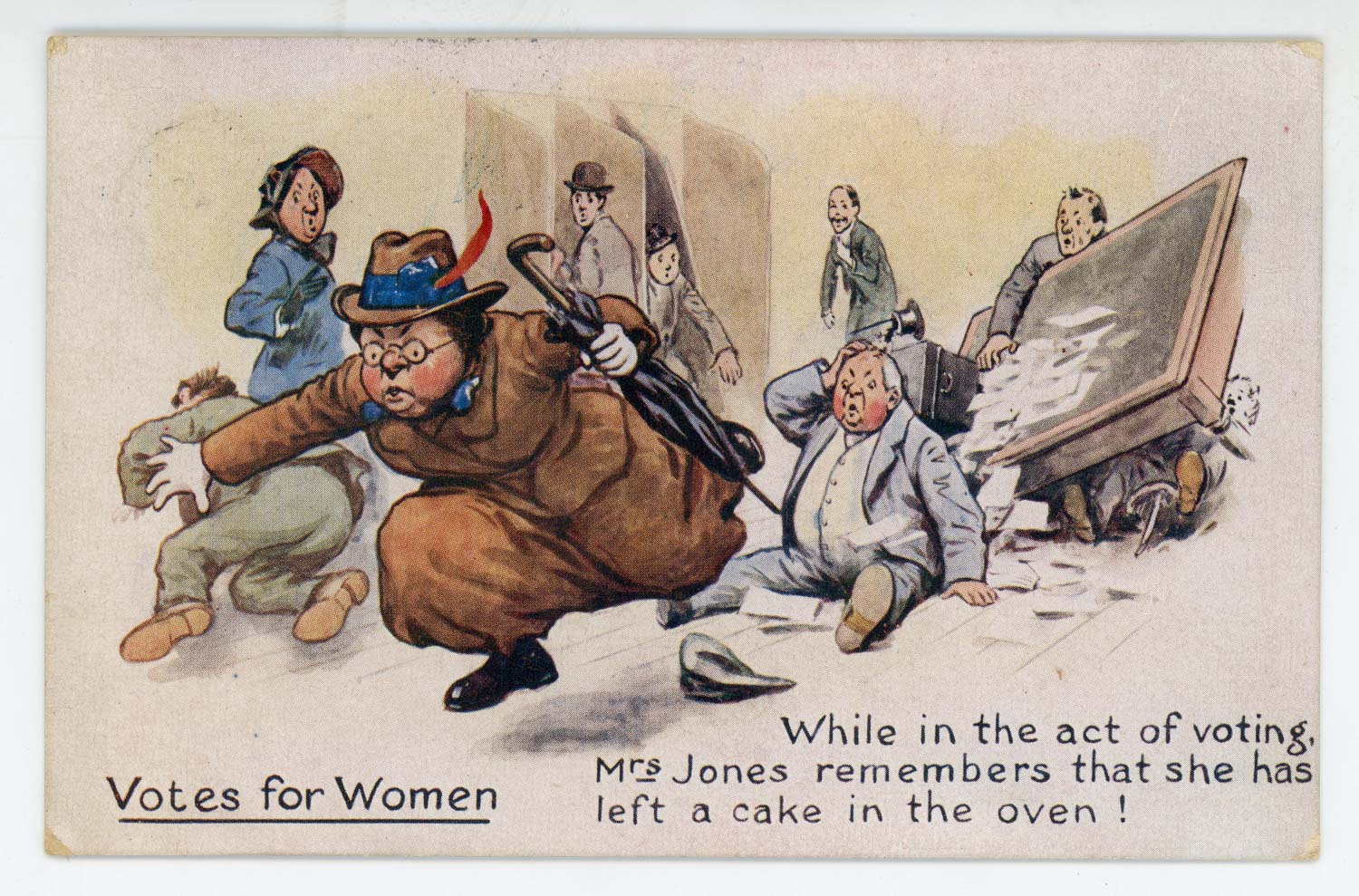 At the 1918 UK General Election – held just over a month after the Armistice which ended the First World War – the four parliamentary constituencies that cover what is now North Lanarkshire all returned Unionist MPs. Buoyed by victory in the War and an economic boom, the Unionists/Conservatives – a party of the wartime Coalition – won a majority of seats across the UK.

Attitudes were changing. At the following General Election, in 1922, all North Lanarkshire seats would turn from Unionist blue to Labour – and Communist – red.

The post-war boom was short and global recessions would hit the heavy industries of North Lanarkshire very hard. By 1921 industrialists in coalmining, iron and steel were making large losses and drastic wage cuts were being implemented. Those who rejected wage cuts were ‘locked out’ by employers and their pay stopped. 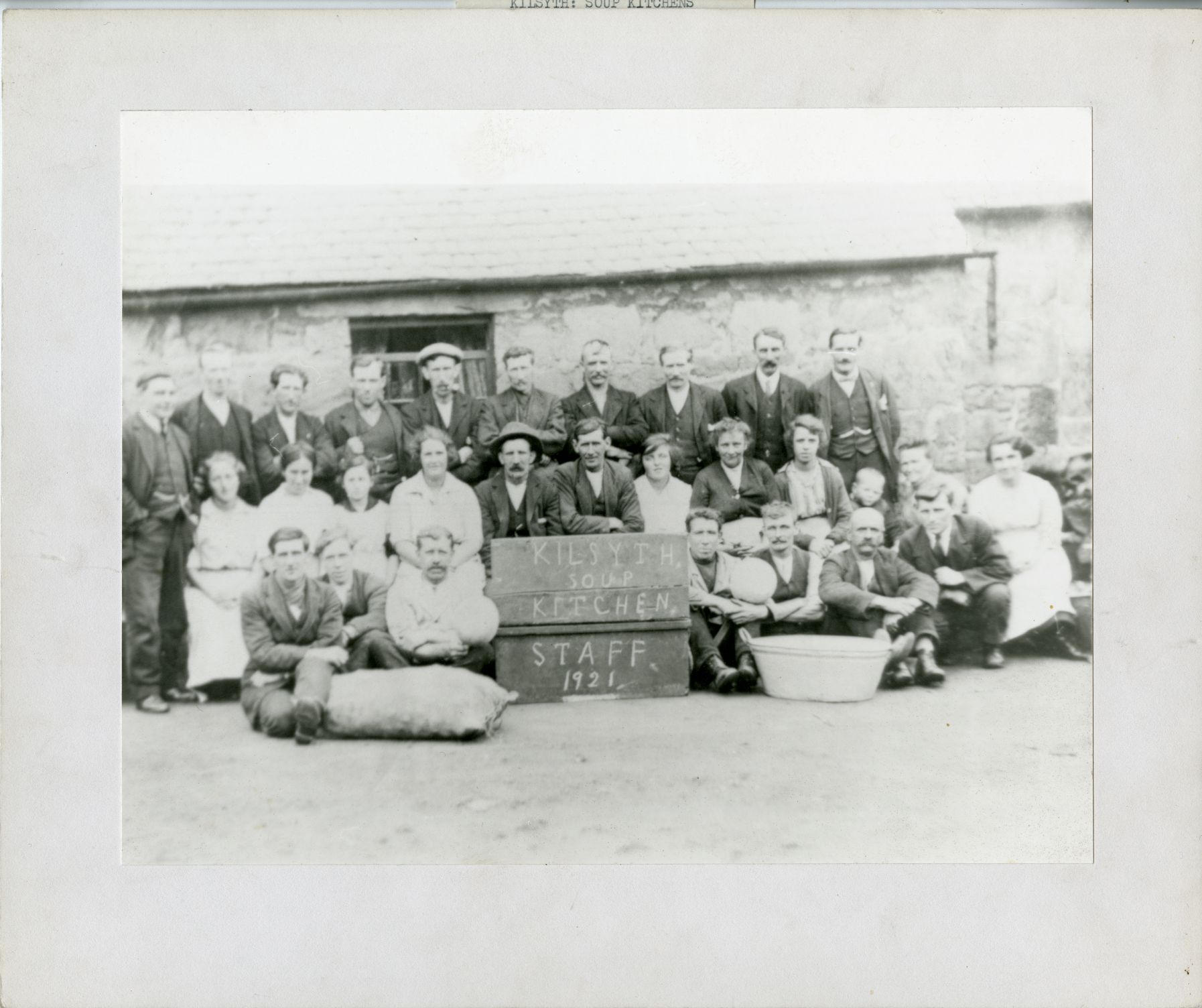 Lanarkshire miners were part of a national strike against lockouts that lasted three months. Local Co-operative branches set up soup kitchens to feed starving miners and their families. Coal shortages hit industries and households that needed it for fuel. By the end of the year 6 million workers across Britain had suffered wage cuts and unemployment was around 17%.

Housing was also a big issue for working-class people in North Lanarkshire. By 1918 around 75% of people in the area lived in poor-quality one-or two-roomed houses, most built cheaply by industrialists. 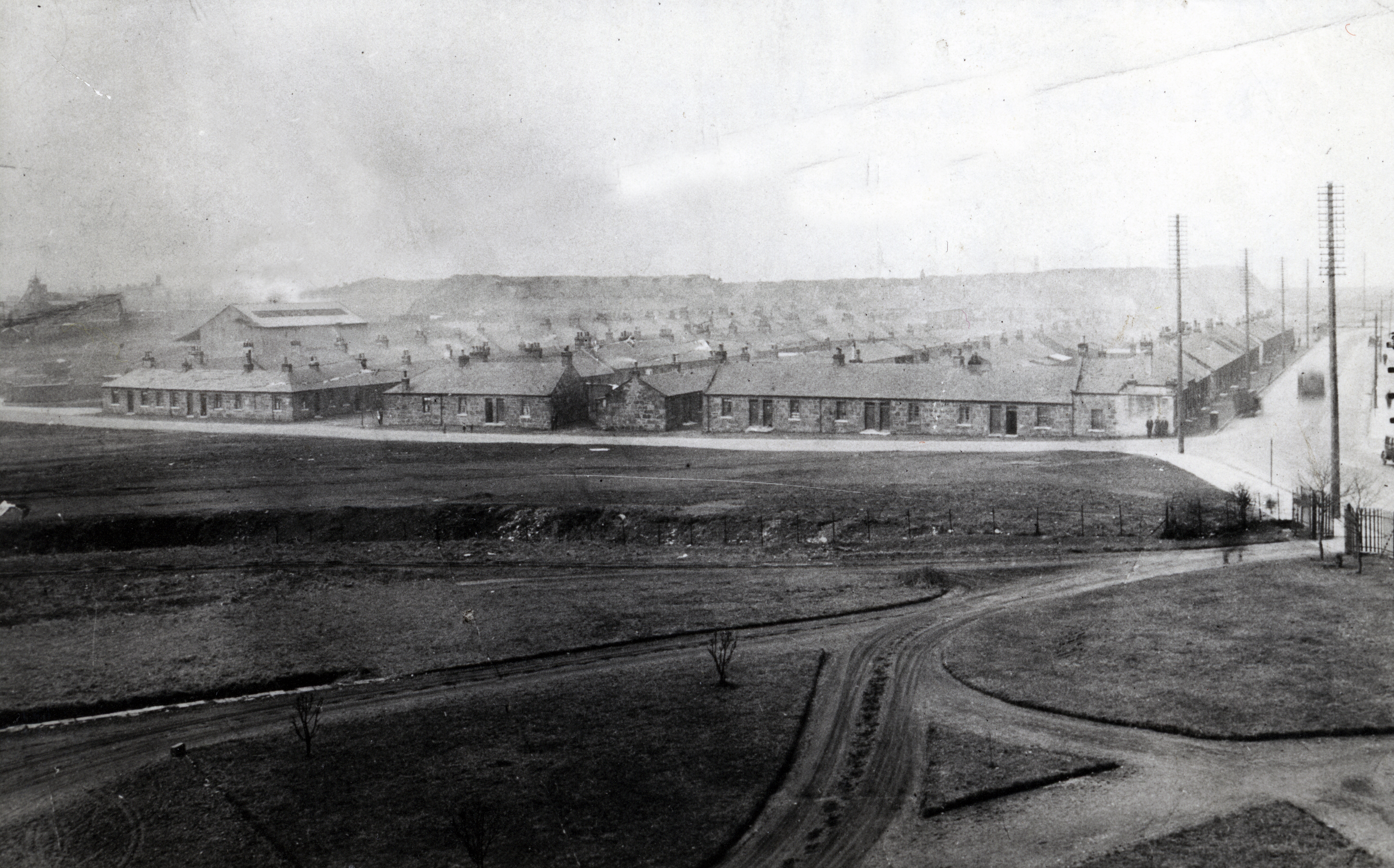 One campaigning organisation that had been making some inroads in North Lanarkshire before 1918 was the Independent Labour Party (ILP), an affiliate of the coalition that would become the modern Labour Party. The ILP organised campaigns, political education, and even set up its own ‘Clarion’ cycling clubs – some of which survive, such as Coatbridge Clarion Cycling Club. All of this activity helped develop very strong connections with local working-class communities.

A stalwart of the local ILP was Wishaw schoolteacher Marjory Neilson Newbold. A popular and well-known activist, she had led ILP campaigns around housing and ran children’s ‘Socialist Sunday Schools’ from the ILP Hall on Miller Street, Wishaw. 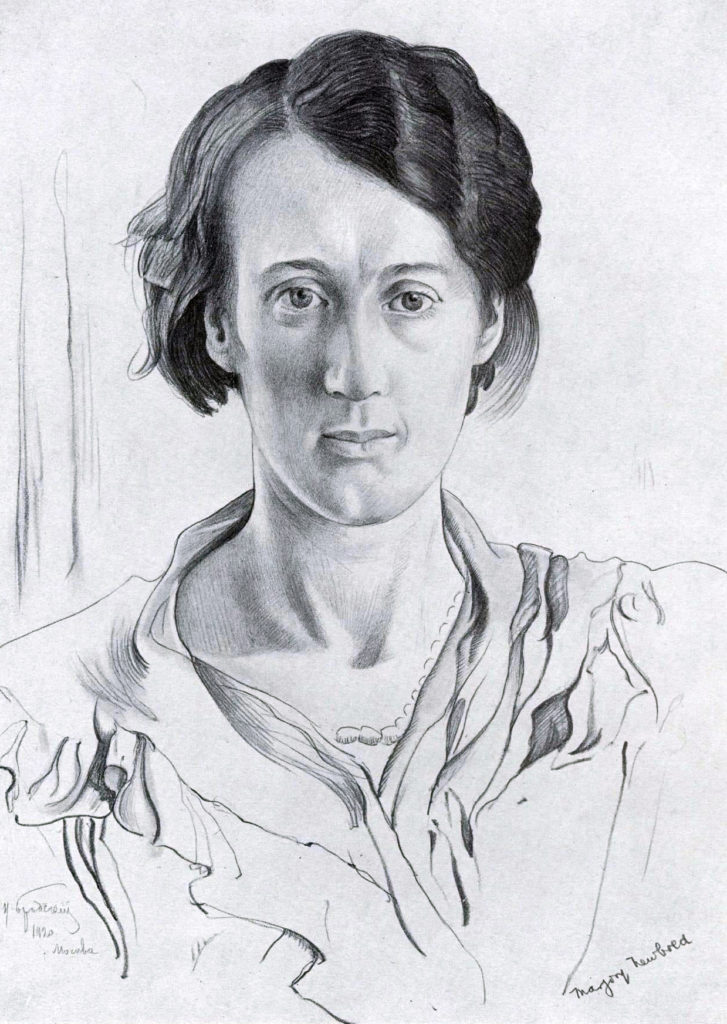 ‘Lady Marjory Newbold’, Isaak Brodsky (1884-1939) c.1920. Likely sketched by Brodsky when Marjory Neilson Newbold was visiting Russia as part of the ILP delegation to the 1920 Congress of the Third International [Image: Public Domain]

However at the 1918 and 1922 General Elections it was her husband, Lancashire-born John Turner Walton Newbold – who she had met through the ILP – who would contest the Motherwell constituency, which included Wishaw.

“Madge’s man”, as Walton Newbold was nicknamed locally, had previously stood as the Labour candidate in 1918. By 1922 he and Marjory – and a significant number in the local ILP – had switched to a newer, more radical force: the Communist Party of Great Britain (CPGB).

Taking their lead from the Russian Bolsheviks, the CPGB believed that a socialist transformation of society through Parliamentary reforms – as Labour proposed – would be undemocratically blocked by the British state and therefore revolution was necessary. 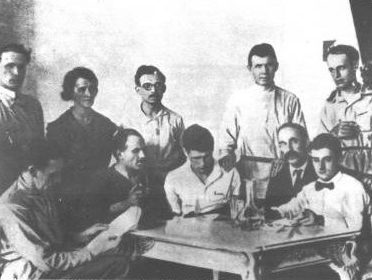 Although they never achieved quite the same popularity as in their Glasgow or Fife strongholds, the Communists attracted a strong base of support in Lanarkshire among people looking for something more radical than the ILP or Labour Party, particularly among mining communities and the unemployed.

History was about to be made. At the 1922 General Election, Newbold was elected as the Communist Member of Parliament for the Motherwell constituency, the first British MP to be elected standing as a Communist Party candidate.

Elsewhere, the other constituencies in what is now North Lanarkshire turned from the Unionists to the Labour Party, mirroring a huge surge toward Labour across industrial areas of Scotland.

Swept up by the socialist euphoria, Newbold sent a remarkable telegram to Grigory Zinoviev, chairman of the Communist International, which read:

HAVE WON MOTHERWELL IN SCOTLAND FOR COMMUNISM.

It was a sensational result that caused as much of a stir in Moscow as it did Motherwell. Newbold used his position in Parliament to propagandise for communism as well as campaign for reforms that would make a positive difference for his constituents, such as better housing and for the rights of the unemployed. 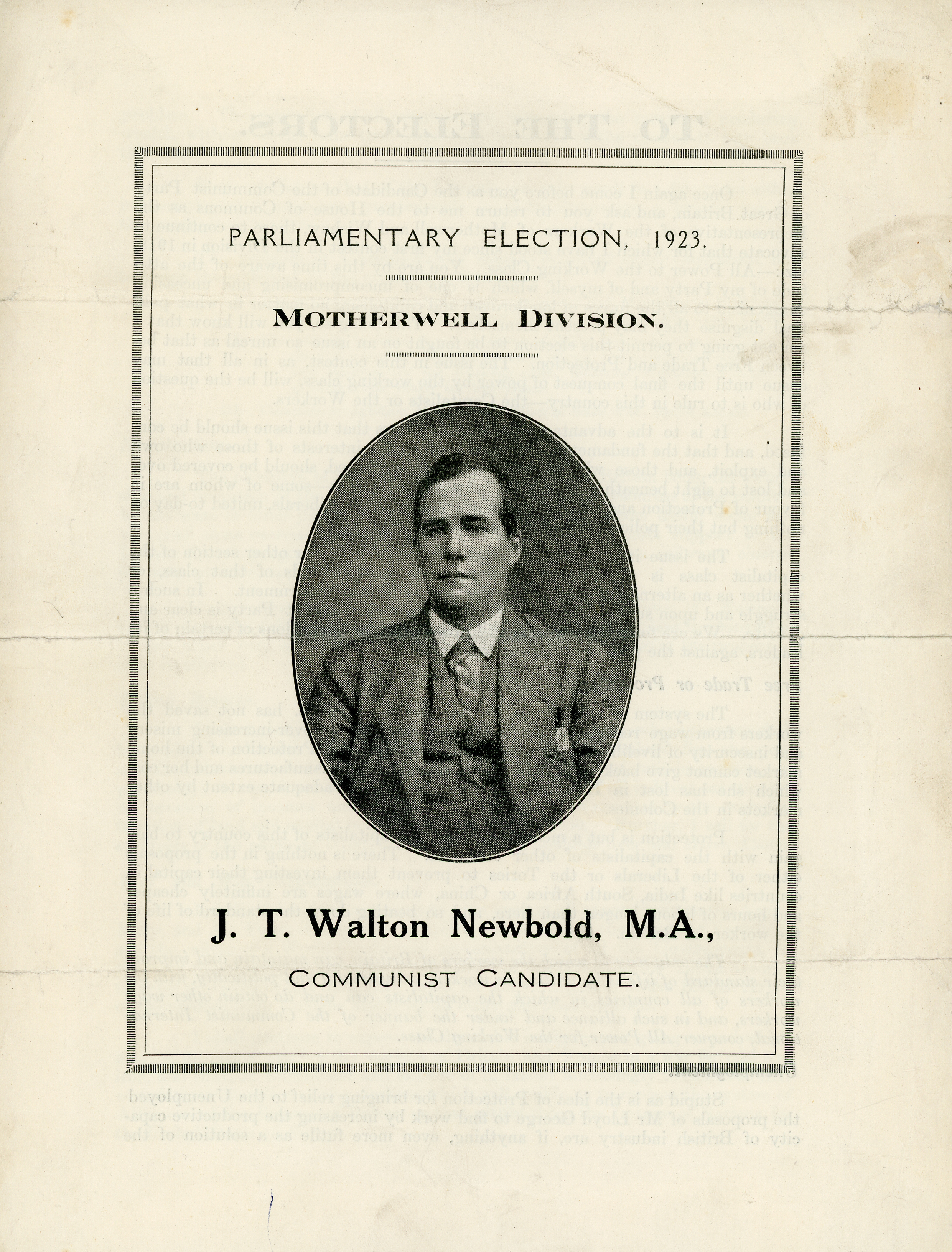 The above pamphlet, dating to 1923, reflects Newbold’s (and the CPGB’s) position on the major issues of the day, and useful for showing how they communicated to the voters of Motherwell and Wishaw. It is an agitationary mix of calling for specific reforms, left-wing foreign policy proposals, and larger, more general communist messages about workers’ solidarity and the overthrow of capitalism.

At the next General Election, held in December 1923, Newbold again stood as the Communist candidate with Labour backing.  However this time he was unseated by the Unionist Party’s Hugh Ferguson, who he had previously defeated.

Ferguson, a 60-year-old former soldier, was a prominent member of the local Orange Order. A sign of the volatility of the time, Ferguson deliberately stoked sectarian tensions in Lanarkshire to try and split the vote along religious lines. The Irish War of Independence (1919-21) had polarised Scotland and Ferguson saw himself as part of a crusade against the twin evils of ‘Sinn Féin and Bolshevism’ that Newbold supposedly represented. 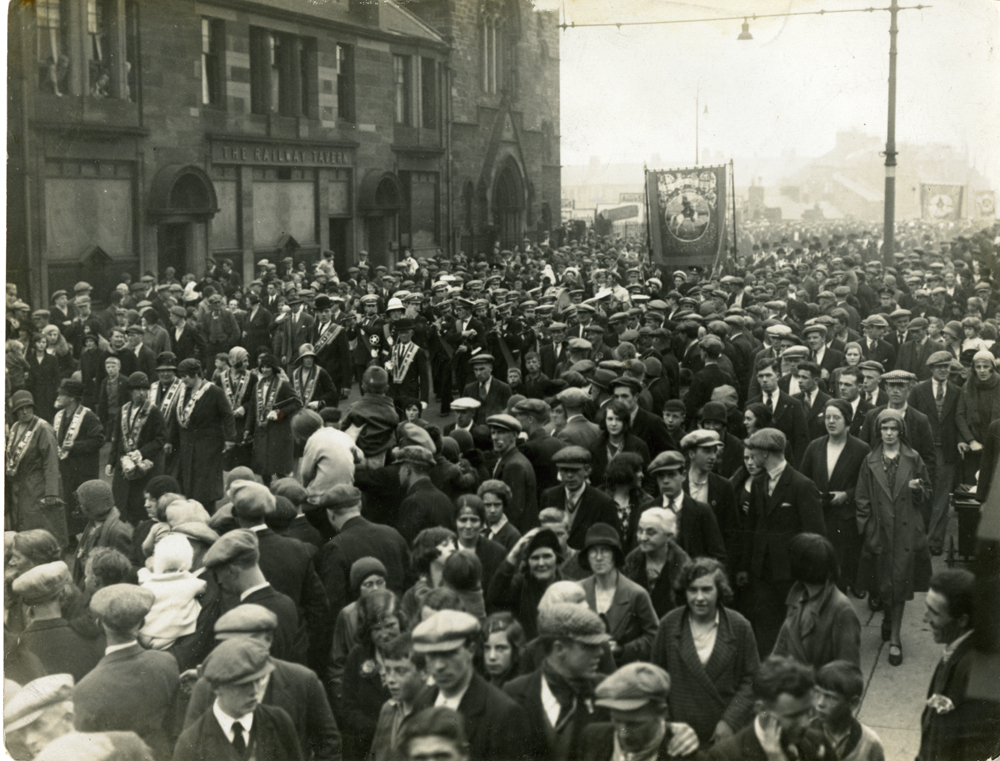 To what extent this was decisive is questionable, as Newbold’s vote didn’t drop by a large amount. It wasn’t to last, as Ferguson himself was defeated less than a year later at the October 1924 General Election, this time by the Labour Party.

Newbold’s victory was the high water mark of Communist electoral success in Lanarkshire. The CPGB would continue to win seats in local council elections, but had greater success in its influence on workplace trade unionism.

However it was Labour – whose local branches had previously endorsed Newbold – that would become the dominant political force in the area for decades to come. It retained the Motherwell seat (almost) continuously until the SNP landslide of 2015, a story that would be replicated throughout the rest of North Lanarkshire.