The recorded history of same-sex love and intersex people dates back to the ancient civilisations around the world. Homosexuality was condemned in some societies but others were accepting of multiple combinations of sex and gender, and some openly celebrated them. In fact, some South Pacific societies believed that heterosexuality, or opposite-sex activity, was sinful.

In the United Kingdom, LGBT+ identities and cultures have long been criminalised and pushed underground. Scotland is now making inroads into creating a more inclusive, equal and accepting society but until very recently this was not the case. Homosexuality in Scotland was only decriminalised in 1981. Before this, same-sex activity was illegal and could result in a jail sentence. Indeed, until 1889, it could result in transportation overseas for life, or the death penalty.

According to NHS Lanarkshire’s sexual health pages, statistically 5 to 10 people in every 100 will be gay, lesbian or bisexual – yet even in 2019 North Lanarkshire’s LGBTQI (lesbian, gay, bisexual, trans, queer, intersex) communities are almost entirely unrepresented in our museum collections.

Why? There are many factors that have made it difficult for members of North Lanarkshire’s LGBT+ community to come out openly. In addition to a myriad of legal inequalities and injustices, discriminatory attitudes and prejudices have been rife for centuries. Some of these prejudices may stem from religious beliefs, whether Protestant, Catholic, Muslim or another faith. Heavy industrialisation may also have played a part in creating a deeply patriarchal, masculinised society. As Councillor Linden noted in an oral history interview recorded in 2019:

There are a vast many quiet voices who have experiences to share that are worthwhile listening to, and thinking about, and reflecting on.

The deep-rooted challenges facing LGBT+ people have resulted in a lack of social and support networks in North Lanarkshire. The LGBT+ community is all but invisible, with very few openly gay figureheads or role models. A small number of LGBT+ personalities from North Lanarkshire are introduced below.

Political activist, poet and magazine editor Eddie Linden was born in Motherwell in 1935. He had a difficult childhood and spent several years in an orphanage. In his late teens he found work in a coal mine and steel mill among other jobs but often slept rough. Linden struggled with his sexuality and it was only when he moved to London in his twenties that he came to terms with being gay. He also became active in the Campaign for Nuclear Disarmament, and later co-founded the Simon Community to address homelessness. A keen writer since his teens, Linden founded the poetry magazine Aquarius in 1969 and has given readings of his own published poems worldwide.

Jim Graham was born in Wishaw in 1945. After his parents emigrated to Maryland in the USA, Graham obtained degrees from the University of Michigan Law School and Georgetown University Law Center. He came out as gay after leaving federal employment and campaigned for HIV/AIDS support. Standing as a Democrat, Graham was elected to office in in 1998, becoming only the second ever openly gay elected official in D.C. He represented Washington’s Ward 1 until 2015. 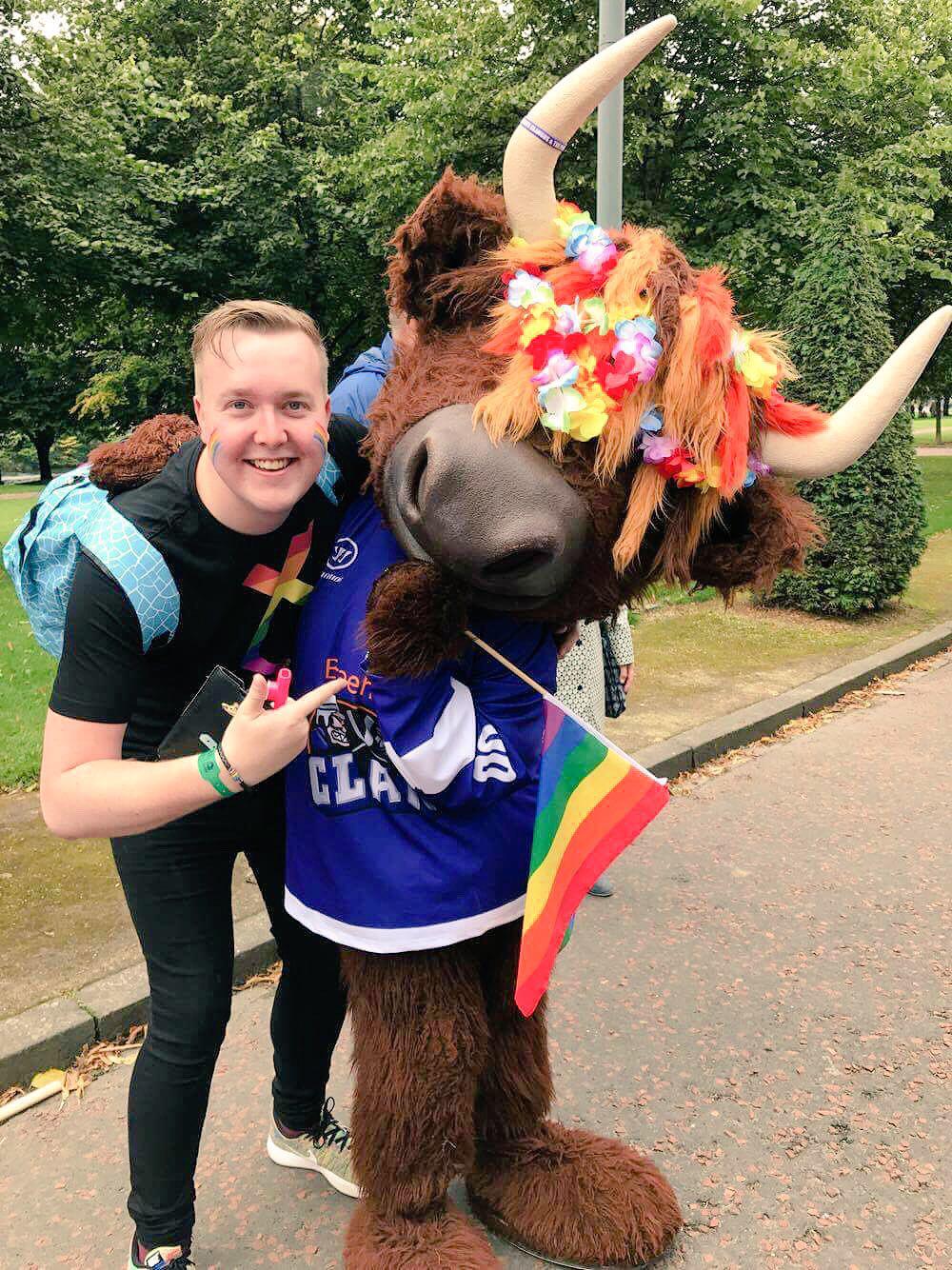 More recently, Jordan Linden of Bellshill experienced homophobic bullying at school but found that political activism offered a more accepting environment.  From the age of fourteen, he got involved in various youth work activities, progressing from Youth Forum and Youth Council to the Youth Parliament and Young Scots for Independence (YSI):

I did well academically but the pressure of that, alongside bullying and coming to terms with who you are as a person, and being lonely, chronically lonely.  …  All of that was aided and mitigated by positive experiences of youth work. A real saving grace.

Councillor Linden, who was elected depute leader of the SNP group in North Lanarkshire in March 2019, is an active supporter of the TIE (Time for Inclusive Education) campaign and is happy to talk openly about his experiences to help other LGBT+ young people who might be facing challenges at school and in life .

In a similar vein to heavy industrial occupations, football and other sports have been a notoriously challenging environment for LGBT+ people. Homophobia and a lack of positive role models are still the main barriers to athletes coming out, although women’s football has proved more accepting of openly gay players.

Glasgow-born Leeann Dempster was appointed Chief Executive (CEO) of Motherwell Football Club in January 2009. She held this post until May 2014, when she became CEO of Hibernian FC. Dempster, who is in a same-sex civil partnership, stated during interview on BBC Radio Scotland’s Stark Talk, broadcast in April 2019:

Like many people who eventually realise at a point in their life that they are gay, you go through challenges, and I did struggle a little bit, if I’m honest. I probably realised in my mid-twenties.  …  It was difficult and it was unexpected for me but I’m really glad it happened because I’m very settled, I’m very happy, and I feel very fortunate.

Television has perhaps proved a less hostile environment for LGBT+ employees over the past decades. Presenter Angus Purden was born around 1974 and raised in Shotts. He was crowned ‘Mr Scotland’ after winning a Daily Record competition as a teenager in 1992, which launched a modelling career in Paris and Milan. Also a newspaper columnist and TV news reporter, Purden is best known for presenting programmes such as Postcode Challenge and Cash in the Attic.

Producer Bryan Kirkwood was born in Bellshill in 1976. He has worked in television since 2002, initially as a storyliner for ITV’s Coronation Street and then as producer of Channel 4’s Hollyoaks and BBC’s Eastenders. Kirkwood is openly gay and has been in a civil partnership since 2011.

After a very slow start, Scotland is now regarded as the best country in Europe for LGBT+ legal equality. LGBT people have been able to serve openly in the military since 2000, and in 2001 the age of same-sex consent was changed from 21 to 16, bringing it into line with legal age for opposite-sex activity. Those struggling with gender identity issues have been entitled to change legal gender since 2004. With regards to relationships, same-sex couples were granted the right to a civil partnership in 2005, the right to adopt a child in 2009, and the right to marry in 2014.

In November 2018 the Scottish Government announced that LGBT-inclusive education would become a part of the Scottish school curriculum. Many schools in North Lanarkshire are making efforts to foster equality and inclusion. Airdrie Academy established a pupil equalities group called PNP (Pride Not Prejudice) in 2017, and achieved the LGBT Youth Scotland Silver Charter Award in May 2019.  Stephanie Masterson, a pupil support teacher at the Academy, notes:

On the lead up to Purple Friday we had a rainbow flag that we could get the pupils to sign at breaks and lunchtimes.  …  We  got the message out [that] it’s a pledge that you’re making to stand up for equality.  …  The rainbow flag wasn’t just for our LGBT pupils, it was for everyone, to include everybody and promote having allies in the school.

Similarly, Caldervale High in Airdrie has a Charter devised by the school’s Pupil Council, which draws upon the Rights of the Child (UN Convention), and has achieved a Bronze Award in the Rights Respecting School programme. Other schools in the area have LGBT support groups and are working hard to challenge stereotypes and inequalities.

There is still some way to go before society is fully accepting of LGBT+ people but hopefully the future is rainbow bright.

Councillor Linden talks about the TIE campaign and mental wellbeing

North Lanarkshire’s Cinemas: Wartime and Beyond