Traces of Lanarkshire’s earliest inhabitants can be seen at Summerlee, in the form of a variety of prehistoric tools from the Mesolithic period, the Middle Stone Age. These tools represent the Stone Age toolmakers camp that was discovered at Woodend Loch, now part of Drumpellier Country Park.

Over several years, beginning in 1947, archaeologists found a total of 771 stone artifacts on the shores of the loch. These tools were left behind by nomadic hunter-gatherers who came to fish in the loch. Bands of hunter gatherers visited the area for thousands of years, ranging from the late Paleolithic to the Mesolithic.

The artifacts vary from waste products of stone chipping; to narrow scraping tools, used in woodwork and making clothes; to microliths, tiny blades of brittle stone forming the tips of spears and arrows. Such weapons were used for hunting, fishing and perhaps for fighting.

A scraper for woodwork or making clothes with two other stone tools. Reproduction by kind permission of National Museums Scotland.

But what kind of people were these early hunters and fishermen? How much do we know about their lives and the world they lived in?

In the Paleolithic period (the Old Stone Age), great changes began to take place in Europe. 45,000 years ago, the first modern humans began to enter the continent, which was then inhabited solely by Neanderthals.

The Neanderthals were overrun by the migratory humans, who gained some Neanderthal ancestry in the process. This gave rise to a distinctive new population, christened ‘Cro-Magnon Man’ by early anthropologists, but in today’s terms called Early Modern Humans.

These ‘Cro-Magnon’ people, and those that came after them, made distinctive tools, and left behind many carvings and cave paintings. They practiced a nomadic lifestyle, ranging over great distances in search of food. They lived either in caves or in temporary wooden shelters to protect them from the unforgiving climate. Paleolithic people were scattered in small groups, forming networks across vast distances – according to one set of estimates, the total population of West and Central Europe between 42,000 and 33,000 years ago was only 3800 at the very highest, and perhaps as few as 800 individuals.

Magdalenian Culture carving of two swimming reindeer, made from a mammoth’s tusk.

During the Mesolithic period (the Middle Stone Age), Europe became dominated by a new race of hunter-gatherers. These were the Western Hunter Gatherers (WHG), a distinctive group represented by individuals such as La Braña Man, Loschbour Man, and Cheddar Man. Western Hunter Gatherers were Caucasoid people of medium height, but robustly built, with strong teeth and bones. Genetic analysis indicates that they had dark skin, and exclusively blue or green eyes.

Arriving in south-eastern Europe c. 15,000 years ago, WHG people gradually spread out across all of the continent. When they came into northern Europe, the last Ice Age was coming to an end, and the climate was significantly warmer than today, allowing wild animals and people alike to thrive in a hot, wet landscape. 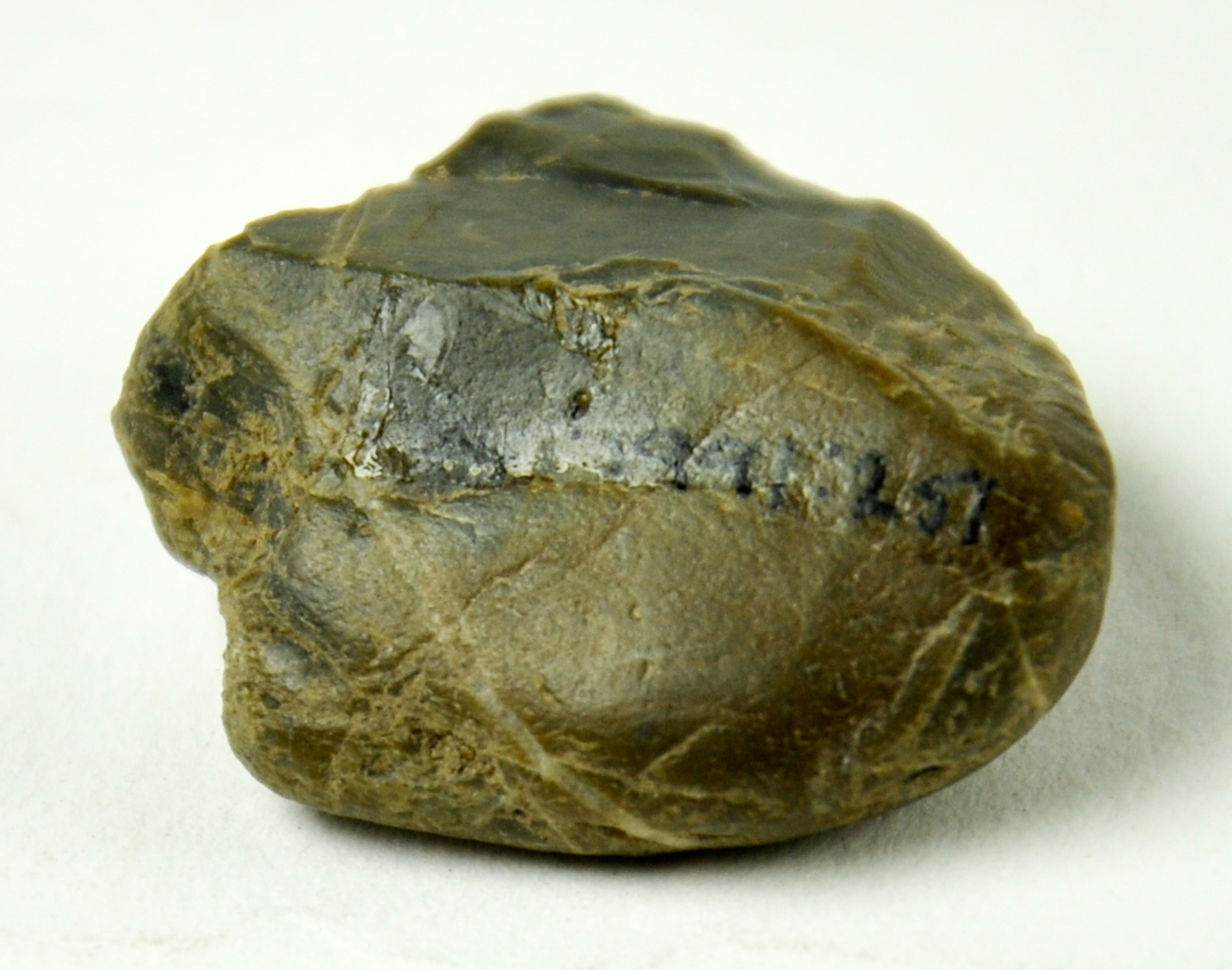 Mesolithic Europeans continued to rely on stone tools, chipping brittle stones such as flints, cherts and mudstones to make tiny tools and blades suited for delicate tasks, such as cleaning and shaping animal skins to make clothing, tents and blankets. There was no such thing as specialisation: a hunter had to be capable of making and mending his own clothes, building shelters, tracking and chasing prey over long distances, and making stone blades for the hunting spears that his life depended on. 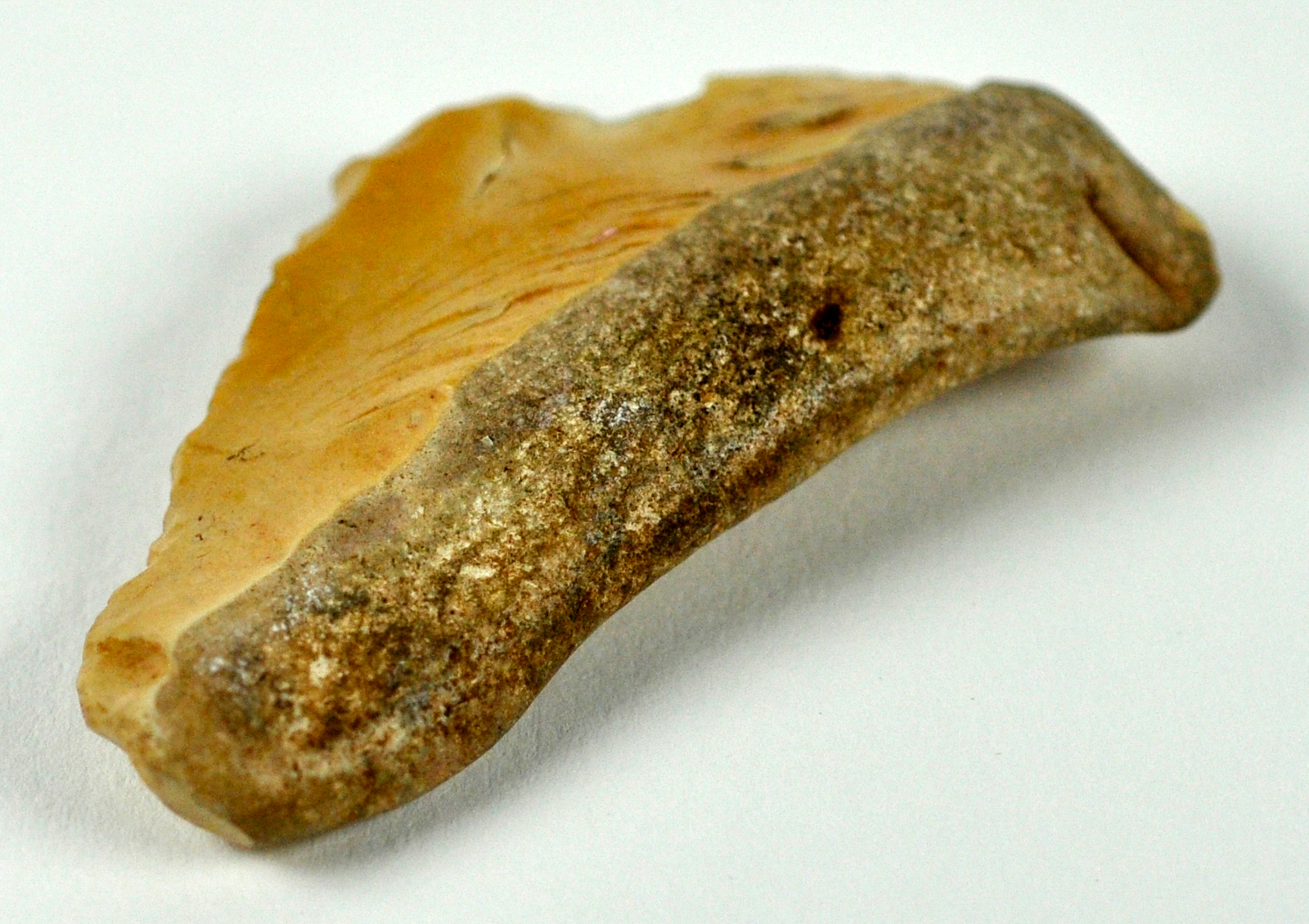 A thin blade made of mudstone. This hard type of stone was not found locally, and must have been valued by the tool-makers. Reproduction by kind permission of National Museums Scotland.

Mesolithic people did not have to be totally self-reliant, though. Grey wolves began interacting with humans perhaps as long ago as 30 thousand or even 40 thousand years ago. Wolves would follow migratory hunters and scavenge what they could from carcasses the hunters left behind. Humans showed favouritism to the friendlier and more endearing wolves, feeding them more and giving them preferential treatment, so that over time the scavengers became progressively smaller, more docile, and friendlier to humans, with shorter, ‘cuter’ faces, and a wider range of coat colours. Proper dogs were developing by 15,000 years ago, around the same time that Western Hunter Gatherers were beginning to people Europe, and these early dogs probably played a role in tracking down prey. Just as the hunters did not pursue specialist roles, dogs were not bred for specific purposes until the transition to agriculture, and there would have been no obvious distinctions of type among Mesolithic dogs. Their dogs would also have differed from ours as western dogs today have a substantial East Asian component to their ancestry, traced to migrations during the Neolithic.

In Scotland, there is ample evidence of hunter gatherer camps and tool making sites, particularly in the coastal areas, suggesting that they preferred to live where fishing was plentiful (as it was at Woodend Loch). The midden of one Mesolithic site at Sand in Wester Ross shows that coastal people ate large amounts of fish and shellfish as well as red deer.

Intriguingly, findings at the same site tell us that the hunters there had access to at least two types of dye made from red ochre and purple extracted from shellfish. Perhaps people used natural dyes such as these (and plant-based dyes as well) to decorate their clothing as we do today. The hunter-gatherers at Sand also used sea shells to make decorative beads. Findings like these suggest an early interest in fashion and self-adornment, an impression which is supported by these fantastic antler headdresses found in Yorkshire and the Rhineland.

Antler headdress from Starr Carr, Yorkshire, c. 11,000 years ago. Eye-holes were cut out, allowing it to be worn as a mask.

This type of headdress may have had a practical use, disguising hunters sneaking up on deer. Alternatively, they might be kept as trophies, and worn to impress others. They may even have had a religious importance, corresponding with the veneration of spirit animals today.

A tantalising glimpse into the Mesolithic world is offered by the many-faced Shigir Idol from the Ural Mountains, the oldest surviving wooden sculpture in the world. This imposing 11,500 year old figure stood at 17 feet tall, with incised patterns and faces carved into the wood with a beaver’s jaw bone. The idol stood on the shore of a lake, and toppled in after a period of roughly 20 years. Afterwards, the lake became a peat bog, and the sterilising acid protected the wood from decay for millennia. The image is thought to represent a local spirit rather than a god, but whether this being was benign or malevolent is unknown.

Drawings of the Shigir Idol showing patterns and faces in the wood.

The idol displayed in Yekaterinburg today.

The idol was likely made by Ancient North Eurasians, a race of mammoth hunters whose descendants today include Siberians, Native Americans, and Europeans. Lost Mesolithic sculptures like the Shigir Idol may be echoed by the totem poles, kurgan stelae, and balwans carved by its makers’ scattered descendants.

The 9th century Zbruch Idol, now on display in Krakow. This is an example of a ‘balwan’, a carved monolith depicting the Slavic gods. Balwans were revered in pagan times.

A copy of the Kernosovsky Idol in Ukraine. This Yamnaya Culture idol depicts a warrior armed with mace and bow. He is either a mortal hero, or the chief Indo-European deity, Dyeus Phter (‘Sky Father’). If mortal, he would be the prototype for heroes such as Achilles and Cuchulain.

The Western Hunter Gatherers were not to remain masters of Europe forever. With the onset of farming, a people from the north-western edge of Anatolia (modern Turkey) took up herding and the cultivation of wheat. As their population multiplied, the hardy farmers began to expand across Europe, clearing forests, planting crops and clashing with the hunter gatherers in brutal, one-sided wars as they progressed. The Neolithic farmers slowly but surely displaced the hunter-gatherers as the predominant people in Western Europe, spreading gradually from the south-east, and arriving in Britain by 4000 B.C.

As copper and bronze axes replaced stone, and the horse was domesticated on the western steppe, the farmers were themselves overrun by new invaders linked with the Yamnaya Culture. Yet the descendants of Europe’s Mesolithic people never totally disappeared. In fact, the mid to late Neolithic saw a gradual resurgence of hunter-gatherer ancestry across much of Europe, occurring over a period of millennia.

This was not purely a case of the farmers abducting hunter gatherer women as they conquered new lands. Mesolithic male lineages are still well represented today in both Scandinavia and the Balkans, and shifts in burial practices imply that the older culture was actually re-asserting itself in some regions by 4500 B.C. Today, Western Hunter Gatherer ancestry is highest in the north-east of Europe, where some people were still living as hunter-gatherers even into Roman times, according to Tacitus’ Germania.