For much of the 1800s and early 1900s Scotland were world leaders in engineering; producing a vast array of machinery, tools and finished products. The first tools were made of iron.

Iron is a hard metal and much more difficult to work by hand than softer metals like brass or copper. In particular it was very difficult for engineers to make flat surfaces in iron using hand tools. This was a time-consuming process involving chipping metal off and then grinding the surface smooth.

The first mass-produced machine tools appeared in the 1700s. First powered by water and then by steam engines, these machines could rapidly make identical products in large quantities. This mass-production in factories completely changed the nature of work but also made products that were previously only luxuries for the rich available to many more people. Not only could machines make saleable goods but they could also make more machines!

The first machine tools were either manually driven, for example by a treadle like a sewing machine or powered by water. Here, a waterwheel would drive long shafts the whole length of the factory from which belts joined up to the individual machine tools. Later water was replaced by steam power and, later still electricity. Around 1900 machine tools started to come with their own electric motors, meaning they could be positioned more conveniently.

Today, most machine tools are computer controlled and the skill is in the programming. However with these old machines a lot of manual dexterity was needed to control the work of many machines such as lathes.

This type of shaping machine was a common fixture in Scottish engineering works, for example in cutting the teeth of gear wheels.

The first slotting machines were developed in 1825 by the Manchester-based engineer Richard Roberts for cutting ‘keyways’, or slots in metal. The cutting tool is fitted to a sliding arm that is powered up and down. The table that holds the workpiece still can be tilted to cut angled slots.

In the videos below former engineer and curator Daniel Mackay MBE demonstrates a slotting machine in action. In the first video he shows how the automatic feed works to reposition the workpiece between strokes of the cutting tool. This video lasts 4:46.

In the next video Dan Mackay shows how he has fitted the workpiece onto the table of the machine and prepares the machine to take a cut. This video lasts 2:36.

In this final film we see the machine in action as it gradually cuts a key into the side of the hole in the centre of the workpiece. This video lasts 4:49.

For more than a century the planing machine was one of the most important machine tools in the engineers armoury.

This machine was used to make flat surfaces in metal. The cutting tool stayed still while the piece to be cut was clamped to the flat table below, which moved back and forth on rollers.

The table moved slowly on the cutting stroke but the return stroke would be twice as fast to save time. The cutting tool was quite narrow but could be moved gradually sideways to shape wider surfaces so that very large components could be made accurately flat.

Here Daniel Mackay demonstrates how a planing machine works, in this case a small, hand-driven version. This video lasts 10:33.

These machines are used to make and enlarge holes. A hole can also be made in metal using a punching machine but the punch makes holes that are not as neat and weakens the surrounding metal. 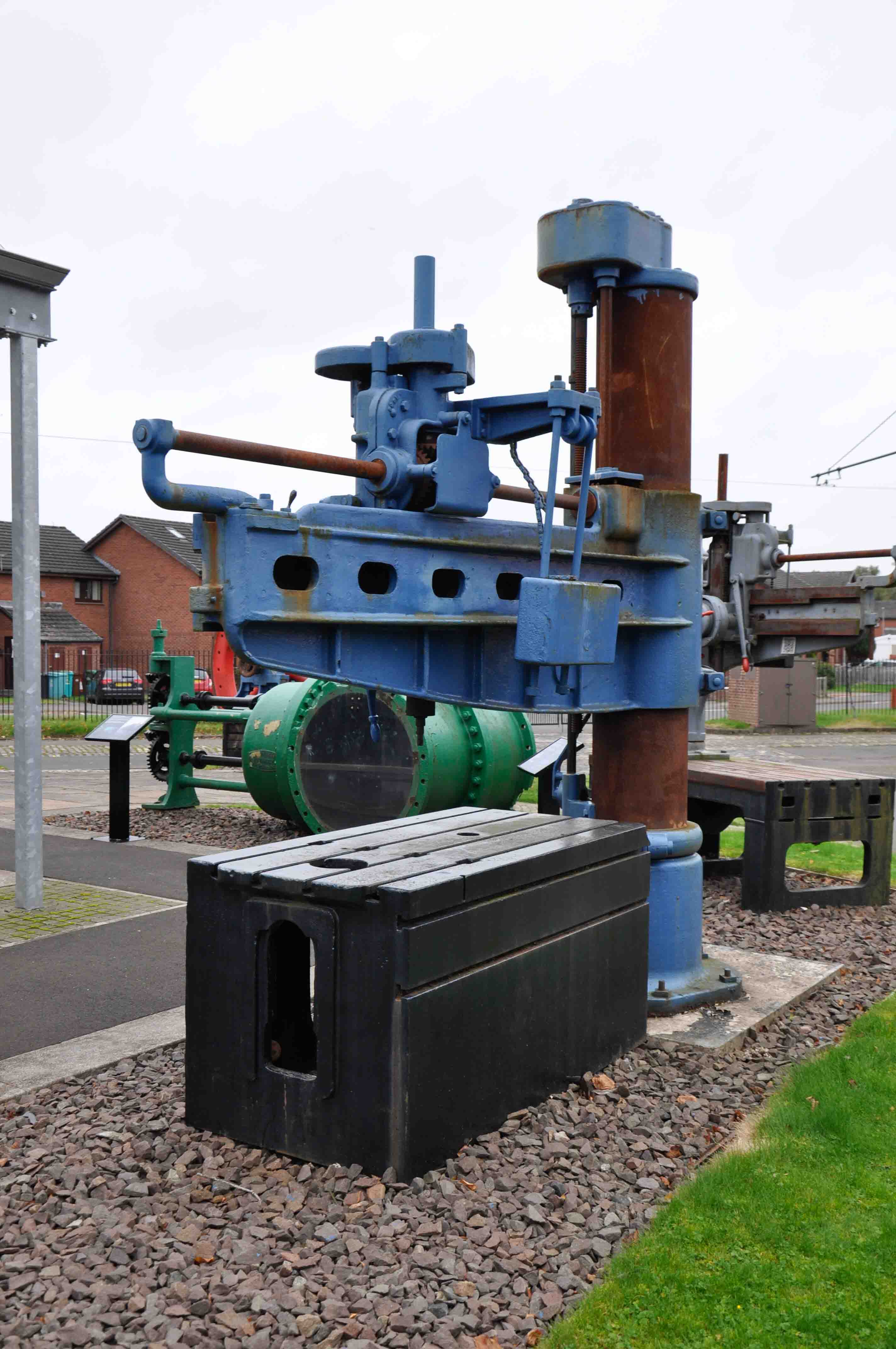 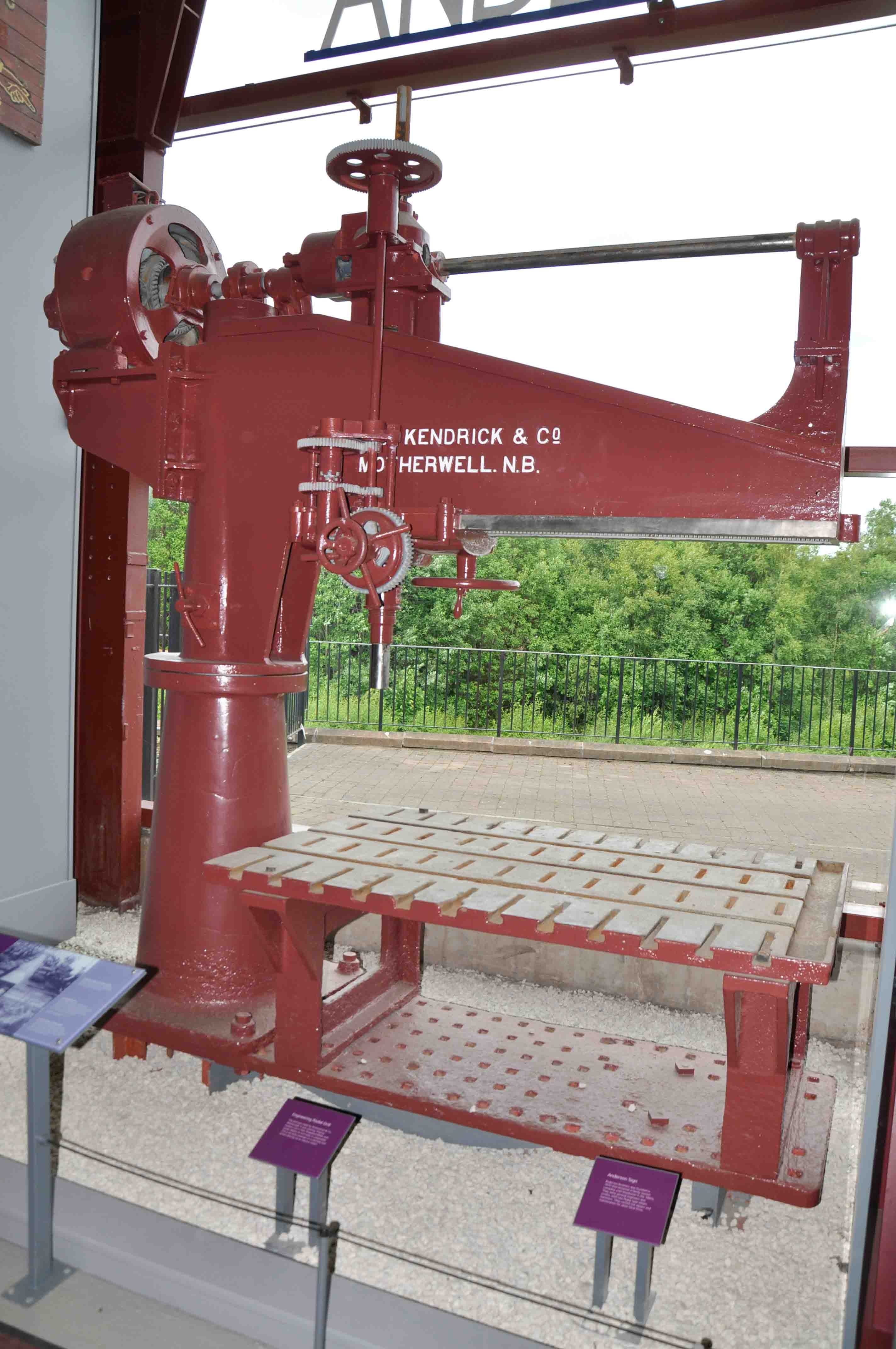 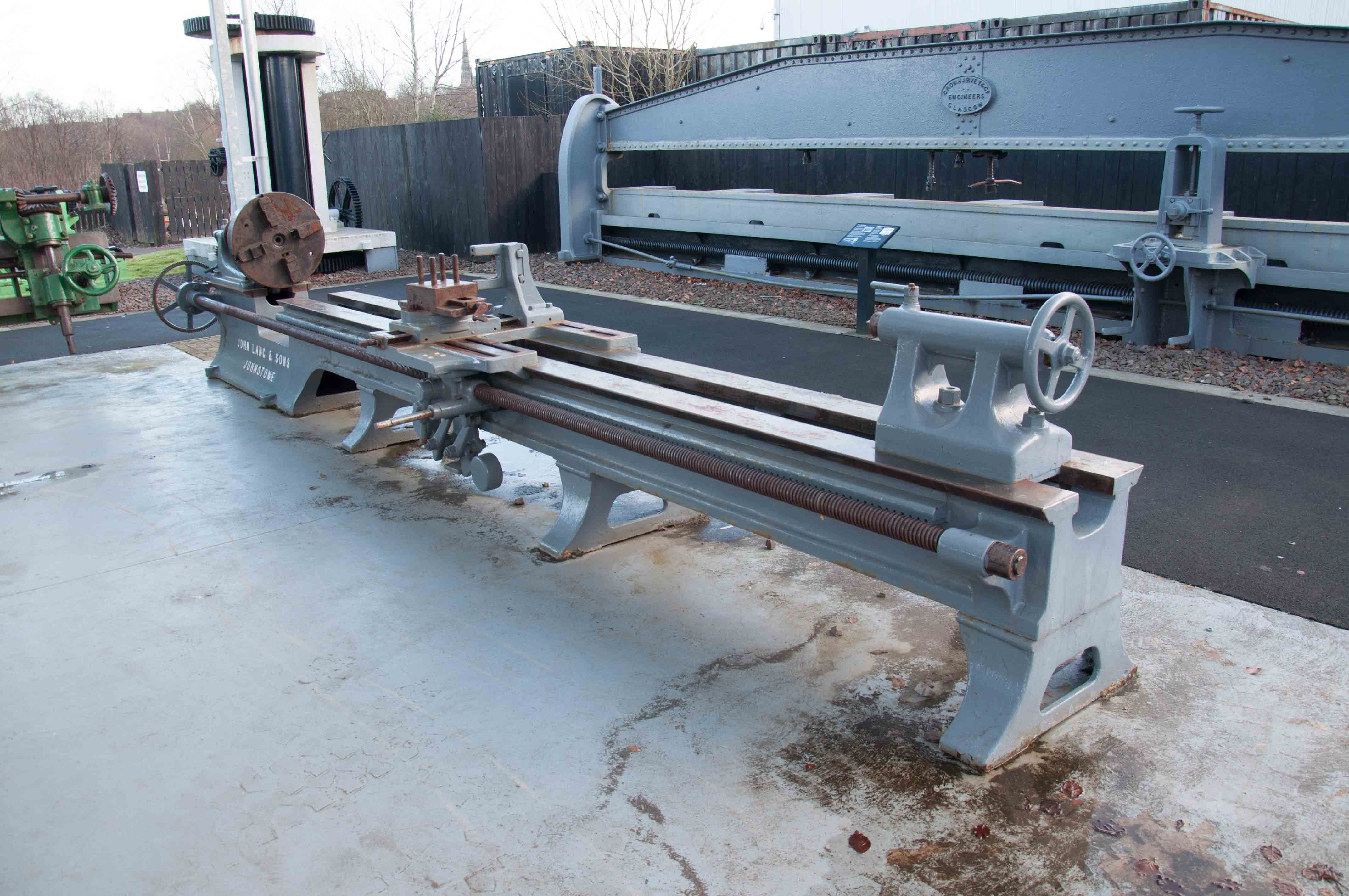 A staple of any workshop, the lathe is for making round objects. The big lathe above was used to turn very large pieces like engine crankshafts.

The first lathes were operated by hand or by foot (using a treadle, like a sewing machine) but as the machines got bigger and worked with harder metals they needed more power. Whether driven by waterwheel or steam engine, the power was transmitted by an overhead line shaft that could drive many machines at once. Only in the early 1900s did machines start to be fitted with their own electric motors but line shaft-driven machines were still in use until the late 1900s.