The fraudulent doctor, called a quack, is a well-known character in popular culture, most recognisable as the snake oil salesman of the Old West. However, the pedigree of the western quack really began in Europe, with the first patent medicine originating in England, and the word itself stemming from Dutch ‘kwaksalver’ (hawker of salves). In fact, patent medicines and shameless fraud continued to be a problem in Britain through the twentieth century.

Behind development of quackery lay the primitive – and potentially lethal – state of mainstream medicine. In the eighteenth and nineteenth centuries, doctors routinely prescribed bloodletting to patients whether they were sick or healthy, either by applying leeches, or by actually cutting open a vein. Leeches were the safer and more popular method, and therefore hundreds of millions of leeches were imported to Europe in the early 1800s. Up to 50 leeches should be applied at a time, in the opinion of the French doctor Broussais, who prescribed such stomach-turning treatment even to himself.

The use of bleeding can be traced back to Ancient Greece, where it was connected with the idea of the Four Humors of the body – blood, yellow bile, black bile, and phlegm. The aim of humorist medicine was to bring these elements into balance, which necessitated bleeding to get rid of excess blood. So ubiquitous was humorism by the Early Middle Ages that the Anglo-Saxon term for a doctor was a ‘leech,’ a term that survived into Early Modern English. The ‘Age of Heroic Medicine’ (1780-1850) saw enthusiasm for bleedings reach new heights, but under a new rationale. Doctors would thoroughly bleed and ‘purge’ patients (meaning giving them drugs to make them sick), believing that such manhandling would shock the body back into health. In fact, it was likely to make them even more sick.

Moreover, many doctors of the time were not really doctors by training, but barbers moonlighting as surgeons, a strange combination of professions that went back well into the Middle Ages. Even the guild which later formed the Royal College of Surgeons was at one time amalgamated with the Worshipful Company of Barbers, together forming the Company of Barber-Surgeons.

With mainstream medicine as likely to finish patients off as to restore them to health, it is perhaps unsurprising that disciples of homeopathy advertised their methods as a safer alternative.

Homeopathy looks at the horrors of allopathy, Alexander Beydeman, 1857.

Quacks claimed to supply cheap relief from the many illnesses that troubled the overcrowded workers in the cities. Because of the unscientific nature of quack medicine, customers naively attributed their natural recovery to the fraudulent treatments they took, and ended up recommending the medicine to others.

The secretive affectations that medical men used to impress customers also paved the way for frauds. This problem was recognised by the insightful Scottish doctor William Buchan, who touched on the subject in his famous 1769 treatise, Domestic Medicine: ‘Had physicians never affected mystery, quacks and quackery could never have existed. Now that they have over-run all Europe, and disgraced both nature and the medical profession, there is no other method of discrediting them with the people, but a total reverse of behaviour in the Faculty. Let us therefore act with candour, openness, and ingenuity…’ (William Buchan, Domestic Medicine).

However, this policy of openness would not really materialise for more than a century to come. In fact, quacks thrived well into the twentieth century, and continued to prosper even as mainstream medicine became safer and more accessible to the majority.

Quack medicine can generally be split into two categories: treatments for specific complaints, and the more popular cure alls, which claim to cover an enormous range of unrelated problems. Cure all adverts follow a basic formula, casting a wide net in the hope of snaring enough customers to make a profit. A typical example claims to cure anything from stomach pains to rickets and tuberculosis. 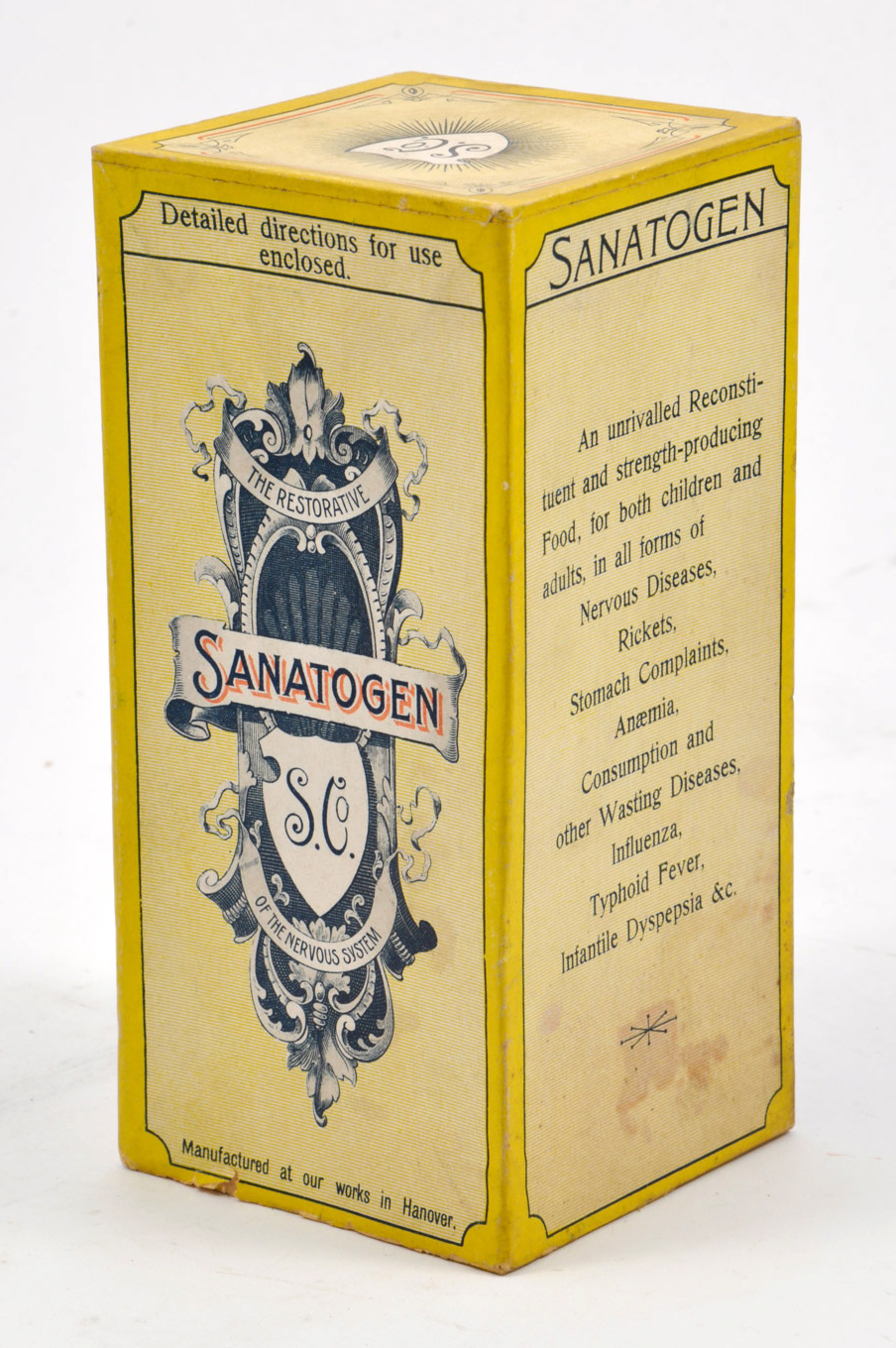 Quackery was pervasive, and adverts for miracle potions and dressings are often found packed into street directories. The claims of an advert in this directory (see page 8) make some impressive (and unlikely) promises. Quack adverts were by no means confined to cheap directories. Even the publishers of serious, apparently respectable medical encyclopaedias were not above including extravagant quack adverts in the pages of their books for a little extra revenue. 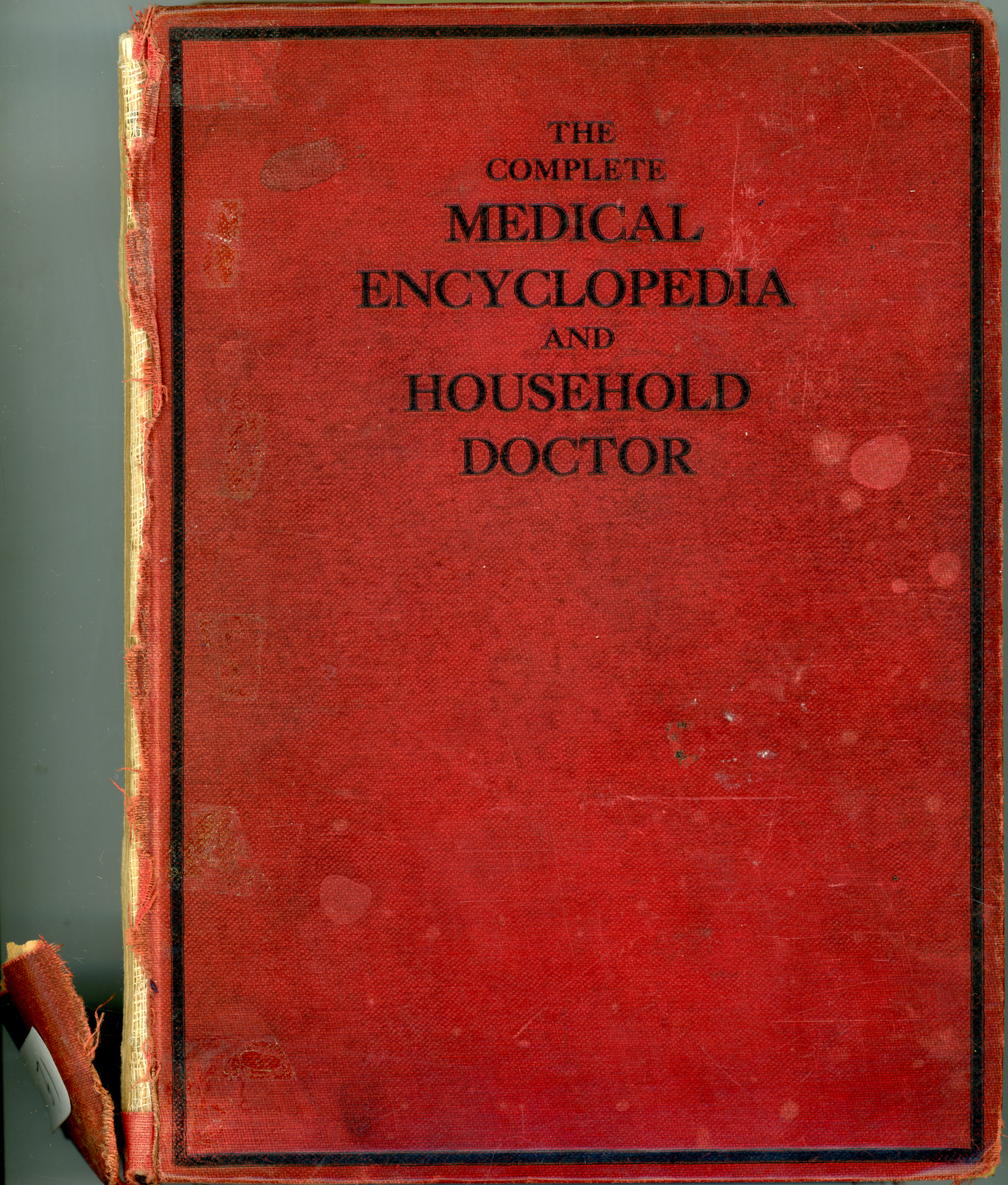 Quacks did not just deal in cure alls, but also sold treatments directed at particular diseases. One example is a plain bottle marked ‘hair restorer’ from c. 1915. The bottle is marked Shieldhall Fever Hospital, but it is unknown whether such potions were ever prescribed officially.

It is not clear whether this substance (whatever it may be) was supposed to reverse male balding or to improve the appearance of women’s hair. The plain and surreptitious appearance of the bottle may hint at the former. 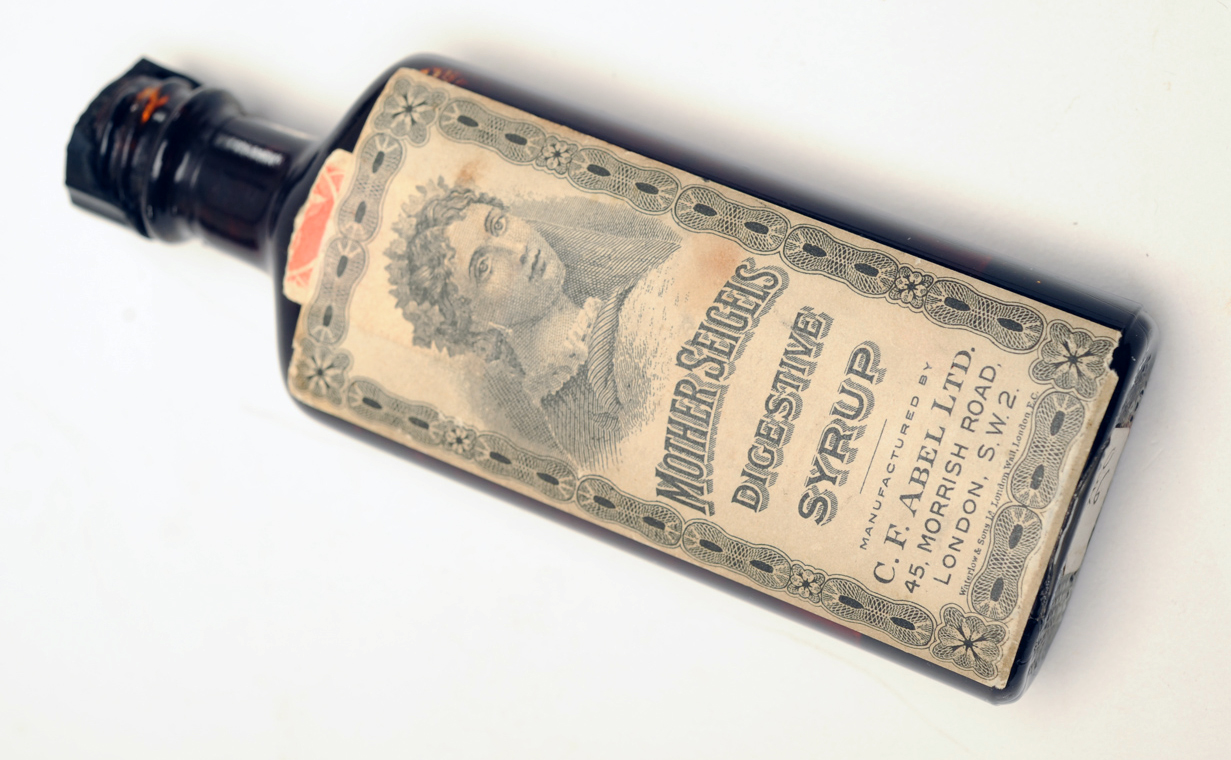 ‘To some we may appear to speak boastingly’

A whole industry of promotional literature grew up around quackery, including commercial booklets, testimonials, and even books of satire and polemic mocking the critics of ‘alternative’ physicians.

This 1847 pamphlet, advertising the miraculous ‘Vegetable Restorative Pills’ of John Kaye Esq., combines pages of testimonials with aggressive marketing literature, proclaiming the pill’s enormous popularity all over Britain. Whether this was really the case, or an exaggeration for marketing purposes, is unknown. Mr Kaye, like many of his contemporaries, was a licensed businessman, and his pamphlet warns against frauds selling his patent without the government stamp and printed signature. The government benefited from the fees to register and maintain patents, and ministers were quite happy to tax the roaring trade in phony medicines. Kayes Almanack of Health for 1847

Another type of quack literature is represented by this booklet attacking the British Medical Association. It portrays mainstream physicians as greedy frauds jealous of the healing powers of herbalists. As the scientific institutions became more critical of herbalism and patent medicines, noisy protests such as this came from those with a vested interest. The satires do contain a grain of truth, as mainstream medicine was still very expensive, and often beyond the means of people in need. Homeopathy was another popular form of quack medicine. This involves the repeated dilution of substances, such as herbs or poisons, in water, until they are so dilute that the added substance is undetectable even at the molecular level. Though thoroughly discredited, people continue to trust in homeopathy today.

This booklet provides a good example of the dangerous nature of homeopathy. It prescribes bogus treatments for life-threatening diseases, such as typhoid, whooping cough, influenza and even smallpox. It is aimed at mothers looking after babies and young children, and therefore endangers the most vulnerable people by giving dishonest advice. Contemporary homeopaths have likewise claimed the ability to mitigate HIV. Before the Doctor Comes

Remedies of the future

The scope and creativity of quackery is by no means limited to sugar pills and water disguised as panacea. In the twentieth century, electric shock therapy was made portable for home use for the first time, originally powered by hand-operated dynamos, but later by mains power. By the twentieth century, the concept of electric therapy was by no means a novelty, and belonged very much to the mainstream rather than the fringe of medicine. It was used to treat various diseases categorised as nervous disorders (mental illnesses in modern terms), and purported cases of hysteria in women. Electric shock therapy is still widely used today, and does have genuine therapeutic value, though it remains controversial, as patients have often been pressured into shock therapy without proper consent. However, the ‘violet ray machines’ and other home electrical devices boast of benefits far beyond the treatment of nervous diseases. One instruction booklet proudly claims the machine’s ability to cure anything from piles to pimples. The detailed instructions for use indicate that such devices were intended for independent use, without a doctor’s supervision. The machines were given impressive scientific-sounding retail names, such as Magneto and Frequento, and were called violet ray machines because of the purple light given off by the glass electrodes. It was experimentation with electrical therapy that started off the career of the remarkable Scottish quack-performer Doctor Walford Bodie M. D., ‘The Electric Wizard of the North.’ Born in Aberdeen, Bodie became one of the greatest (and best paid) showmen ever to perform in the British music halls, his popularity peaking in the Edwardian years. His shows included hypnosis, ventriloquism, clairvoyance, and stage magic, and his charismatic image and persona inspired Charlie Chaplin and Harry Houdini, both of whom he knew personally.

The handsome Doctor Bodie was characterised by his glittering eyes and trademark waxed moustache.

Bodie made miracle cures into an essential part of his performance, with adverts for his shows urging ‘Send Your Cripples.’ Electricity (or ‘Bodic Force’ as he fondly termed it) was an exciting novelty at the time, and a major gimmick for Bodie. His electrical stage stunts ranged from miraculous cures to mock (but still extremely painful) executions by the electric chair (a barbaric Americanism in British public opinion, and therefore an object of morbid fascination). He became founder of the Bodie Electric Drug Company, which sold ‘Electric Life Pills’ and ‘Electric Linament,’ and in this way his shows became the most elaborate quack adverts in the world.

In 1909, the conflict between quacks and the medical profession came to a head when Bodie was pelted with mud and rotten food by medical students at the Glasgow Coliseum, who sent him packing with chants of ‘Bodie, Bodie, Quack, Quack, Quack!’ Confronted with the troublesome fact that he was not a real doctor, Bodie always maintained that the ‘M. D.’ in his name stood for ‘Merry Devil,’ though he had actually bought a doctorate from an American diploma mill just in case. In spite of various legal difficulties and clashes with the medical profession, Bodie continued to perform profitably throughout his life, and died in 1939 at the age of seventy, having just enjoyed a season at the Blackpool Pleasure Beach with his much younger second wife.

Another strange and experimental form of medicine involved the use of vibrating machines, termed ‘massagers,’ which were supposed to increase blood flow to injuries and thereby promote wound healing. The earliest example in our collection is a noisy hand-operated device made by Gerald Joseph Macaura, which was claimed to treat a whole laundry list of illnesses, including deafness, heart disease, and polio. The device is heavy and awkward to handle, and makes a rattling noise like an engine starting up. After the hand-powered devices had set the ball rolling, massage treatment became one of the most popular and recommended new treatments of the early twentieth century, particularly for ‘nervous troubles,’ then as today a major preoccupation. Electrical models were becoming available by the 1920s and 30s, though they remained very bulky and cumbersome. A more earnest later example owes its existence to the inventor’s observation of mine workers, who often leaned against the coal sorting machine to relieve sore muscles and aching joints. Niagara Therapy, the company that made it, still survives today.