Scotland has long held a reputation as Rome’s ultimate frontier in the north. The ruins of Hadrian’s Wall are a testament to the basic truth of this, but Hadrian’s Wall does not mark the fullest extent of the empire, but only its extent in 122 AD, decades after Rome had abandoned her wider ambitions in the north.

A design by Hans Holbein the Younger depicting Terminus, Roman god of boundaries, with the Latin motto ‘Concede nothing.’

The empire’s high-point in the north was brought about by Gnaeus Julius Agricola, Roman governor of Britannia. Agricola was immortalised by his son-in-law, Tacitus, who provided a vivid account of his kinsman’s career in Britain. After subduing rebels in the south, the ambitious governor marched north, conquering many tribes and pushing on to the very limits of the highlands. His northward campaign culminated in the Battle of Mons Graupius (83 AD), in which the Caledonii and their allies were finally crushed by the legions, and made to submit to Roman authority.

The Roman fort at Inchtuthil was Agricola’s headquarters in the north, and though it represents the greatest Roman intrusion north of the Tay, it was only occupied for three or four years before it too was abandoned c. 86 AD. An enormous hoard amounting to over ten tonnes of iron nails, cartwheel rims etc. was unearthed at the site of the fort, hinting at the extent of Rome’s abortive ambitions in the region. These materials were buried to prevent the barbarians from salvaging them, but there remains some possibility that the legion intended to return and recover them. Much of this iron was melted down and re-used in the twentieth century, but many of the nails were preserved. Some are on display at Summerlee. 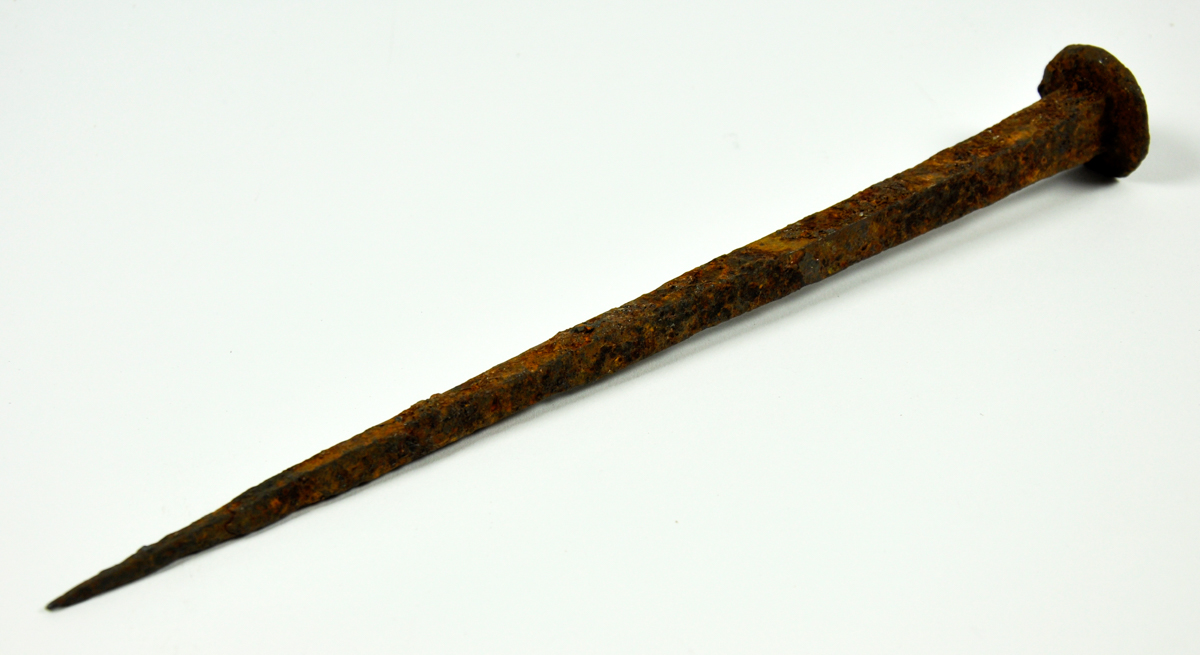 Although the Romans withdrew their troops from southern Scotland around 105 AD, and their forts were destroyed, there is no record of any military disaster, and it is likely that the legions did not leave in disgrace. The most likely explanation is that they were needed to suppress rebellions elsewhere in the empire. The Romans preferred to destroy their own forts rather than leave them for their enemies to occupy, and this was likely the case in Scotland. It was this withdrawal that established the Solway-Tyne isthmus – now the boundary between Scotland and England – as the limit of the empire. This was how things stood when Hadrian built his wall, ‘to separate the Romans from the barbarians’ (The Augustan History).

Hadrian’s successor Antoninus Pius would briefly out-do his adopted father Hadrian. He built the Antonine Wall along the Forth-Clyde isthmus, allowing Rome to lay claim to southern Scotland for some decades. Although the wall was abandoned c. 162 AD, after twelve years of building and only eight of occupation, its imposing earthworks still mark the landscape. The wall forts have yielded a wealth of archaeological evidence of the Roman occupation. At Summerlee, we have one such relic, the head of a statue from the Croy Hill fort. The figure’s identity is unknown, though we can certainly speculate. He could be a god, or a Roman hero like Horatius Cocles, a spiritual patron for the soldiers. He could even have barbarian roots, whether from the Britons, or from the many Germanic soldiers employed by the Romans. 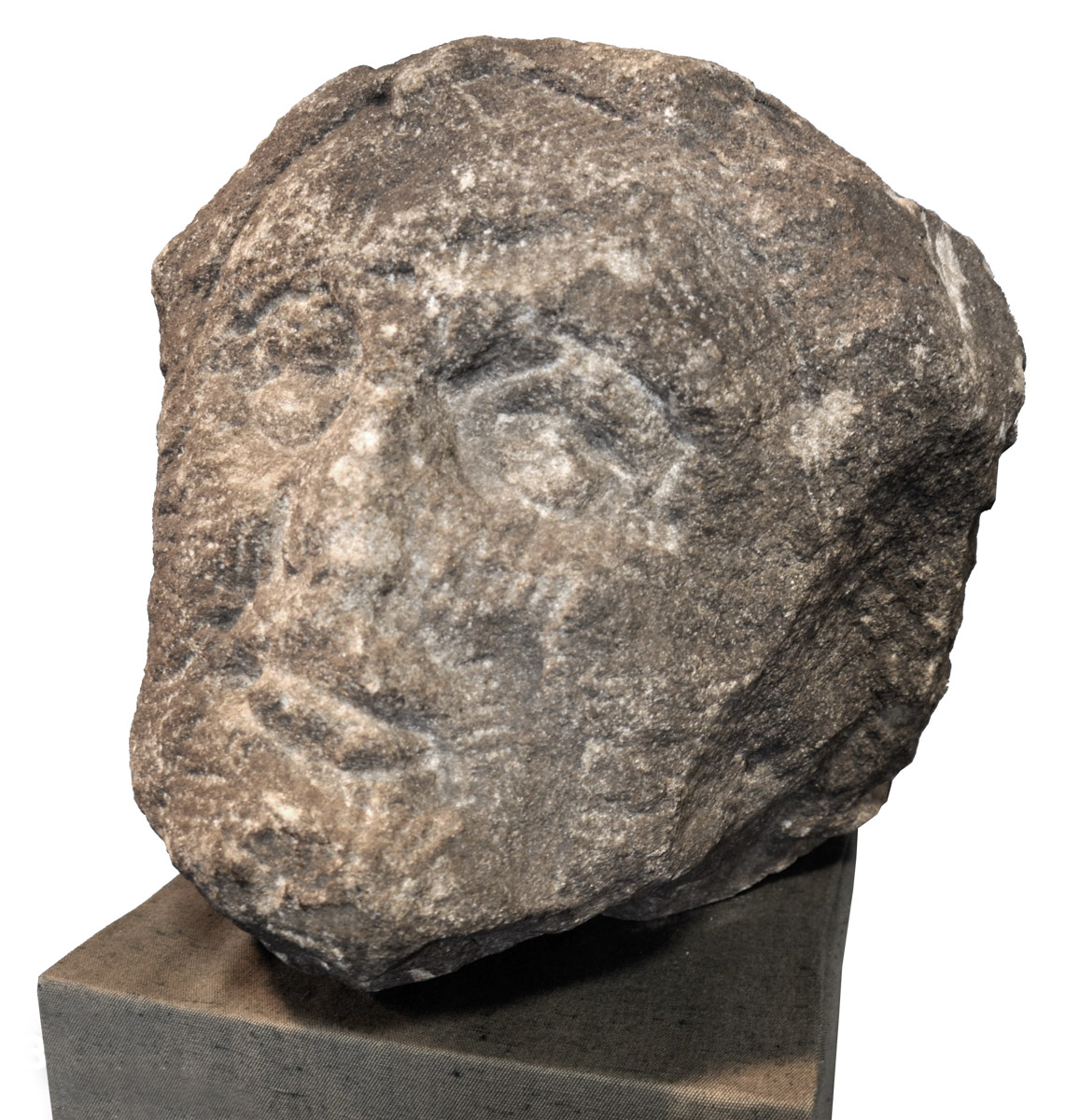 The frontier forts were places of strength and intimidation, but they also served Rome in another sense. Each fort was a city in miniature, a stronghold of Roman culture as well as Roman arms, and a model to impress the barbarians with the advantages of Romanisation. The forts included shrines where the soldiers could pray and make sacrifices to the gods.

A Roman votive inscription from the fort at Housesteads, Northumberland. It is dedicated to ‘Mars Thingsus’, a god that has been tentatively identified with Germanic Tyr.

There were also bathhouses where they could relax, and merchants nearby kept them in good spirits with wine and other luxuries from the empire. Some of the men on the frontier lived with their own families, and these were no doubt expected to set a good example of Roman virtue in their own lives (‘Beginning with himself and his staff, he enforced discipline in his own household first – a task that many find as difficult as governing a province’ – Tacitus, Agricola). 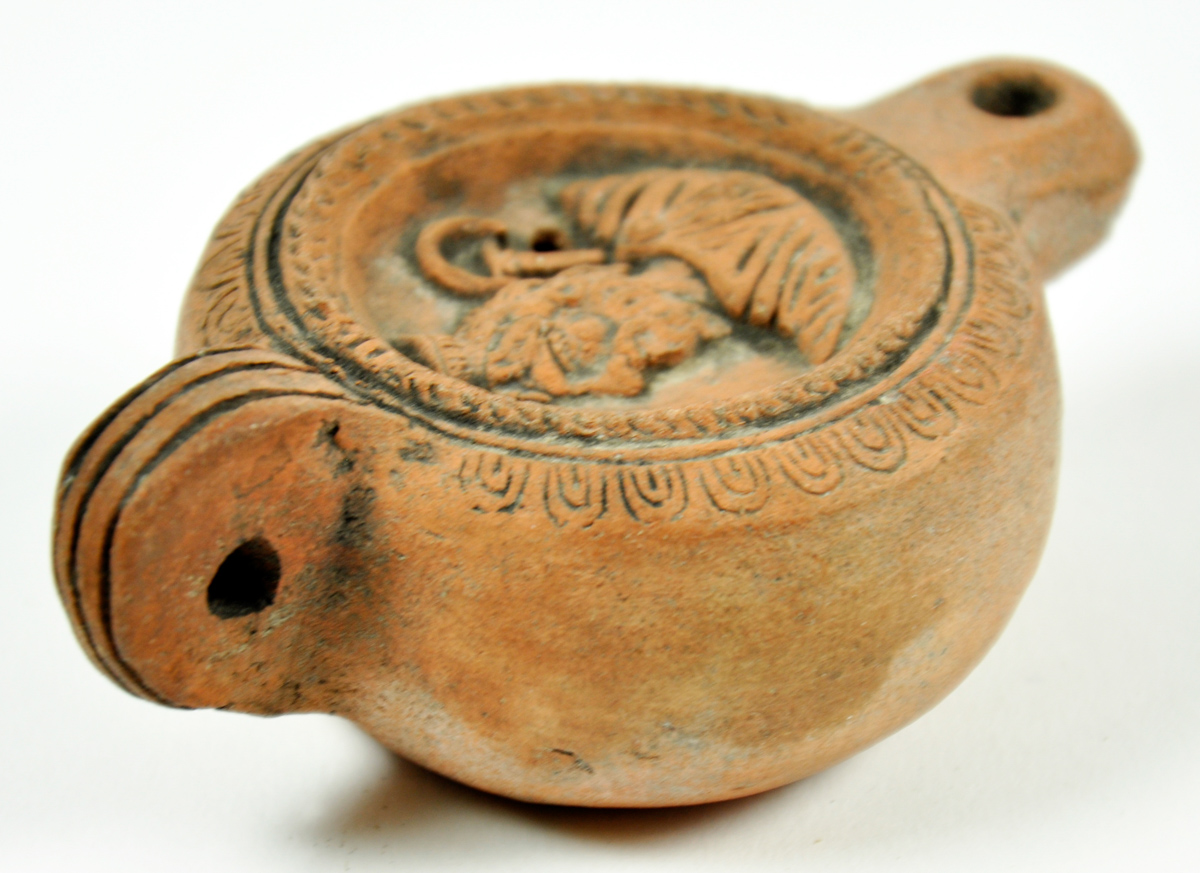 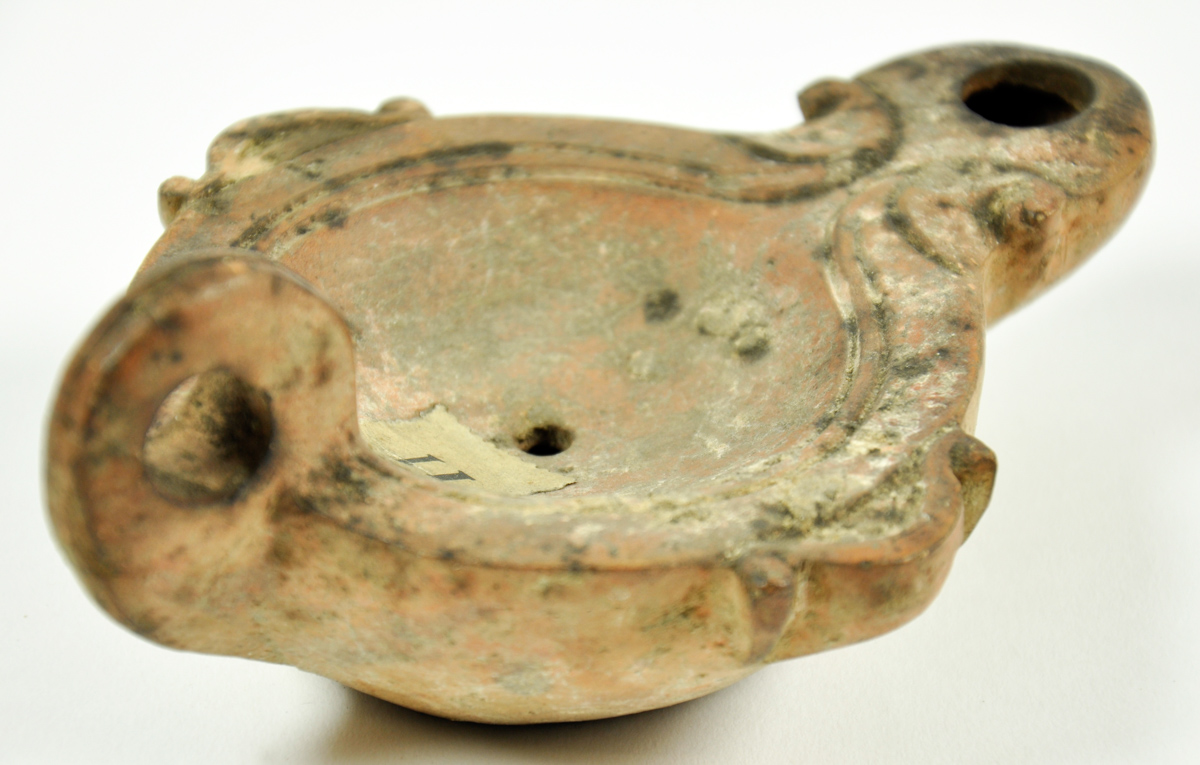 At the time of the Roman conquest, southern Scotland was inhabited by several Brittonic (later Welsh and Cumbrian) speaking peoples, forming a milieu of basically similar tribes. There is evidence of some contact between these northern Britons and their Romanised neighbours, in the form of Roman coins and pottery such as these. 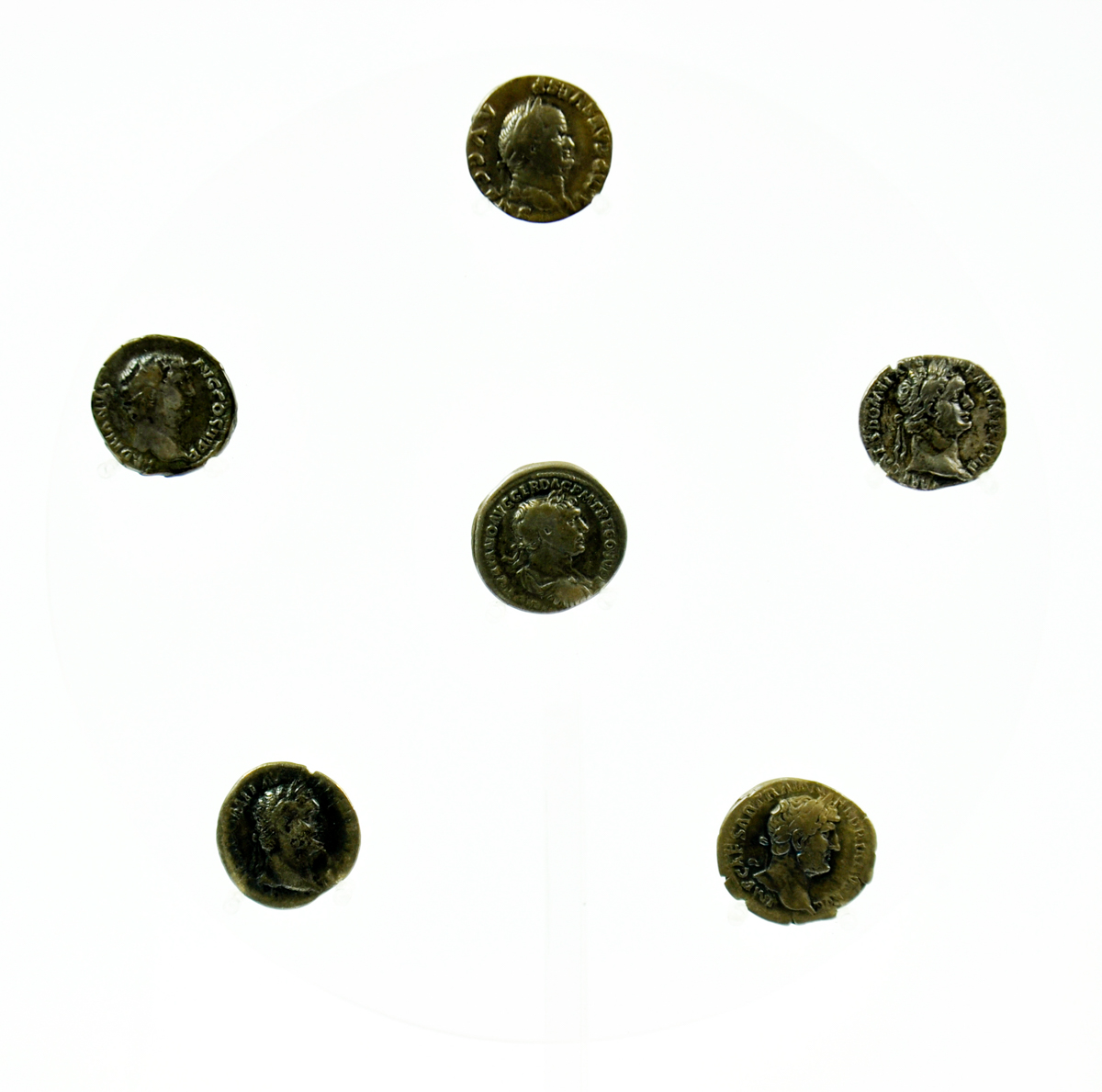 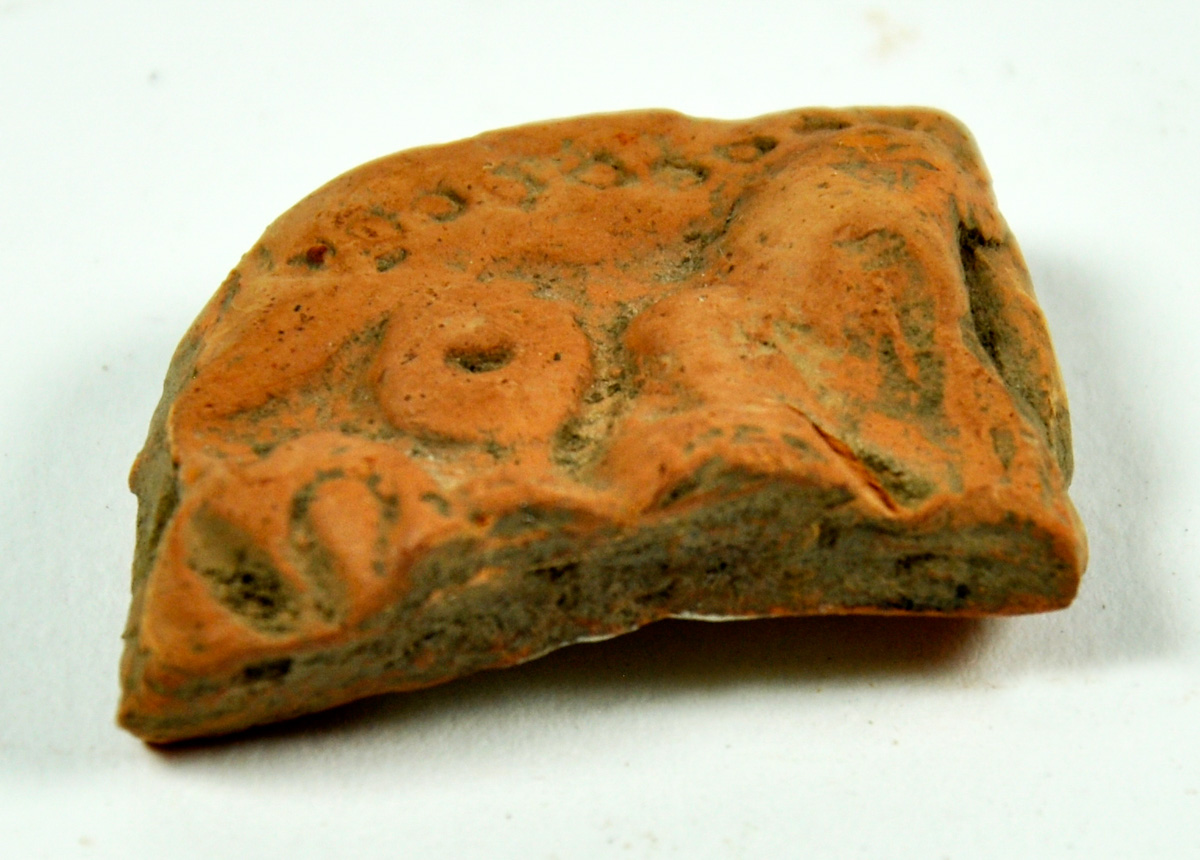 Some peoples had friendlier relations with the empire than others. The Votadini in the east, for example, were supported by the Romans even after the withdrawal south of Hadrian’s Wall, and their kingdom was fostered as an ally against the raiding tribes from the far north. This kingdom would later become Gododdin, which was mourned by the medieval Welsh elegy Y Gododdin many centuries after its conquest by the Angles. A western people, the Damnonii, is less well-attested than the Votadini, but may have formed the tribal nucleus for the Kingdom of Strathclyde, the last kingdom of the Hen Ogledd (‘The Old North’) to fall under foreign rule.