Founded in 1837 the Coltness Iron Company was one of the first large-scale enterprises to take advantage of the Wishaw and Coltness Railway, which linked Wishaw with Coatbridge. The iron company was begun by Henry Houldsworth to exploit reserves of coal and ironstone found on the Coltness estate near Newmains, Lanarkshire.

Houldsworth was a cotton mill owner from Manchester who had moved to Glasgow and established first a mill and then a foundry there. The Anderston Foundry was so successful that he abandoned milling to concentrate on this new enterprise. Regular visits to the Lanarkshire ironworks that supplied iron for his foundry encouraged Houldsworth to enter the industry.

This was at a time of great change in the pig iron industry with the recent invention in Scotland of the Hot Blast Process that greatly improved the efficiency of blast furnaces. The nature of the local mineral reserves made Lanarkshire particularly well-placed to benefit from this innovation. Henry’s sons soon took over the running of the business when his health began to fail. William Houldsworth would go on to found the Dalmellington Iron Company in Ayrshire a few years later. 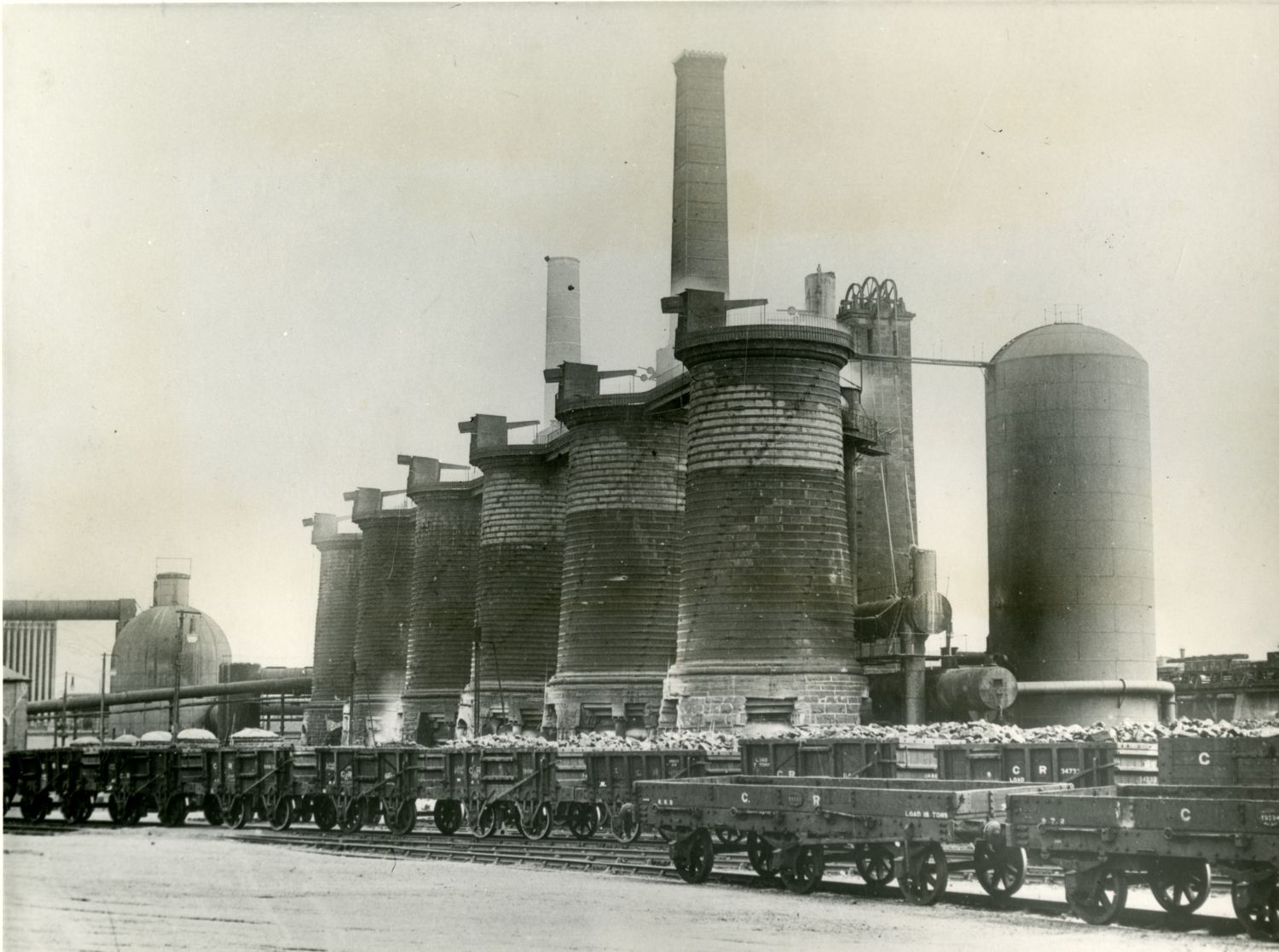 Coltness Iron Works near Newmains, around 1900

By 1842 the Coltness works was able to benefit from the arrival of the railway. The northern end of the line connected with the Monkland Canal and the recently-built public railways that had come to both serve and compete with the waterway. The Coltness Iron Company was to become a major coal owner not just in Scotland but also in England, spreading further afield as local reserves of coal were worked out. The company also produced bricks.

The wonderful series of photographs below shows pig iron being made at Coltness. They date from around 1910 and show the whole process from the arrival of the raw materials to the departure of the finished product.

The raw materials for making iron arrived in railway wagons and were unloaded into smaller hand carts known as ‘charging barrows’ which were lifted via hydraulic hoist to the ‘charging platform’ at the very tops of the blast furnaces. The raw materials of ironstone, coal and limestone were then tipped into the top of the furnace. In the early days the furnace tops were open but by the time of these photos they were closed by a bell mechanism. See Rediscovering Summerlee Iron Works for more information on how a pig iron works operated.

You can open the photos to read a longer description. 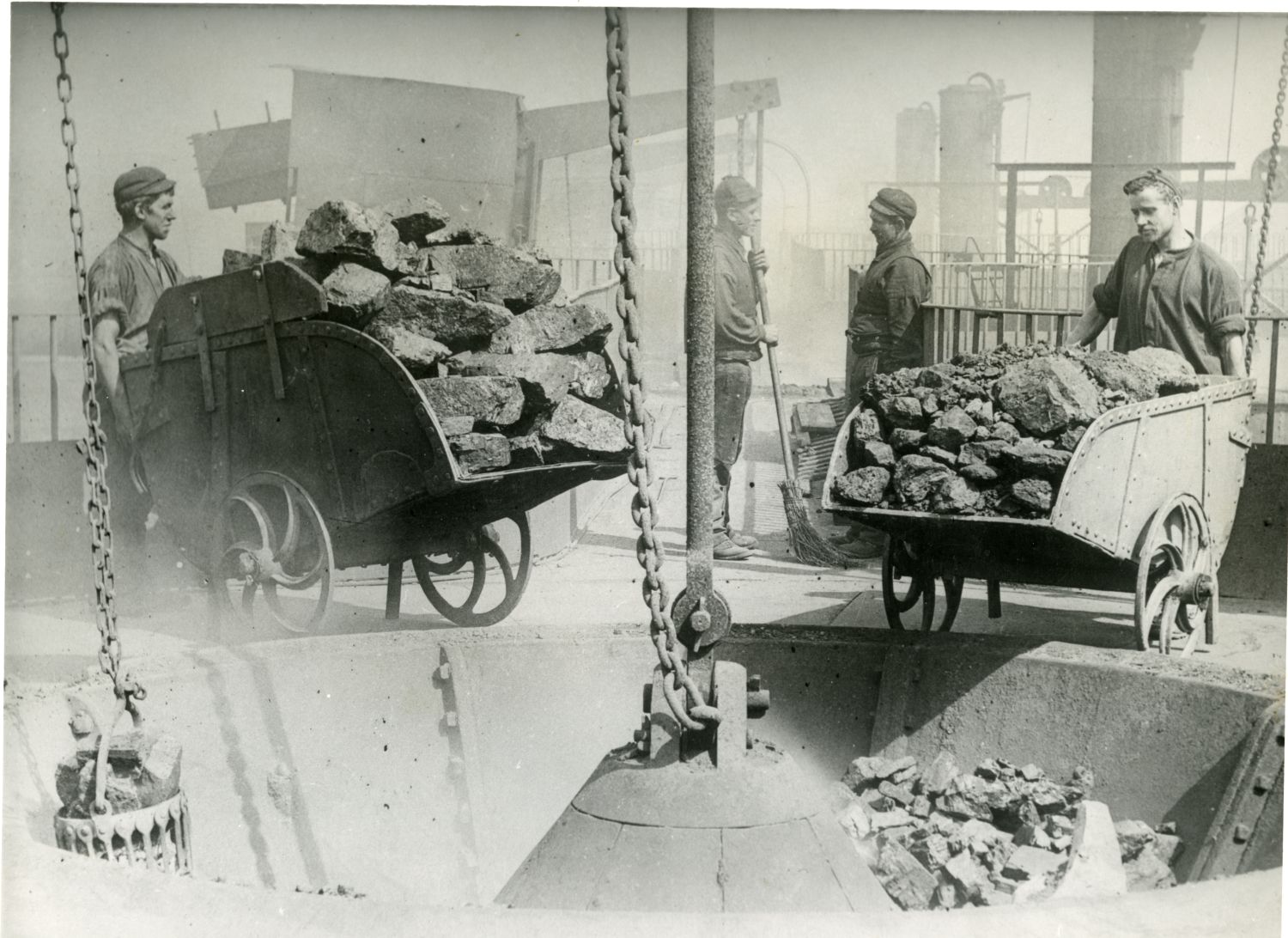 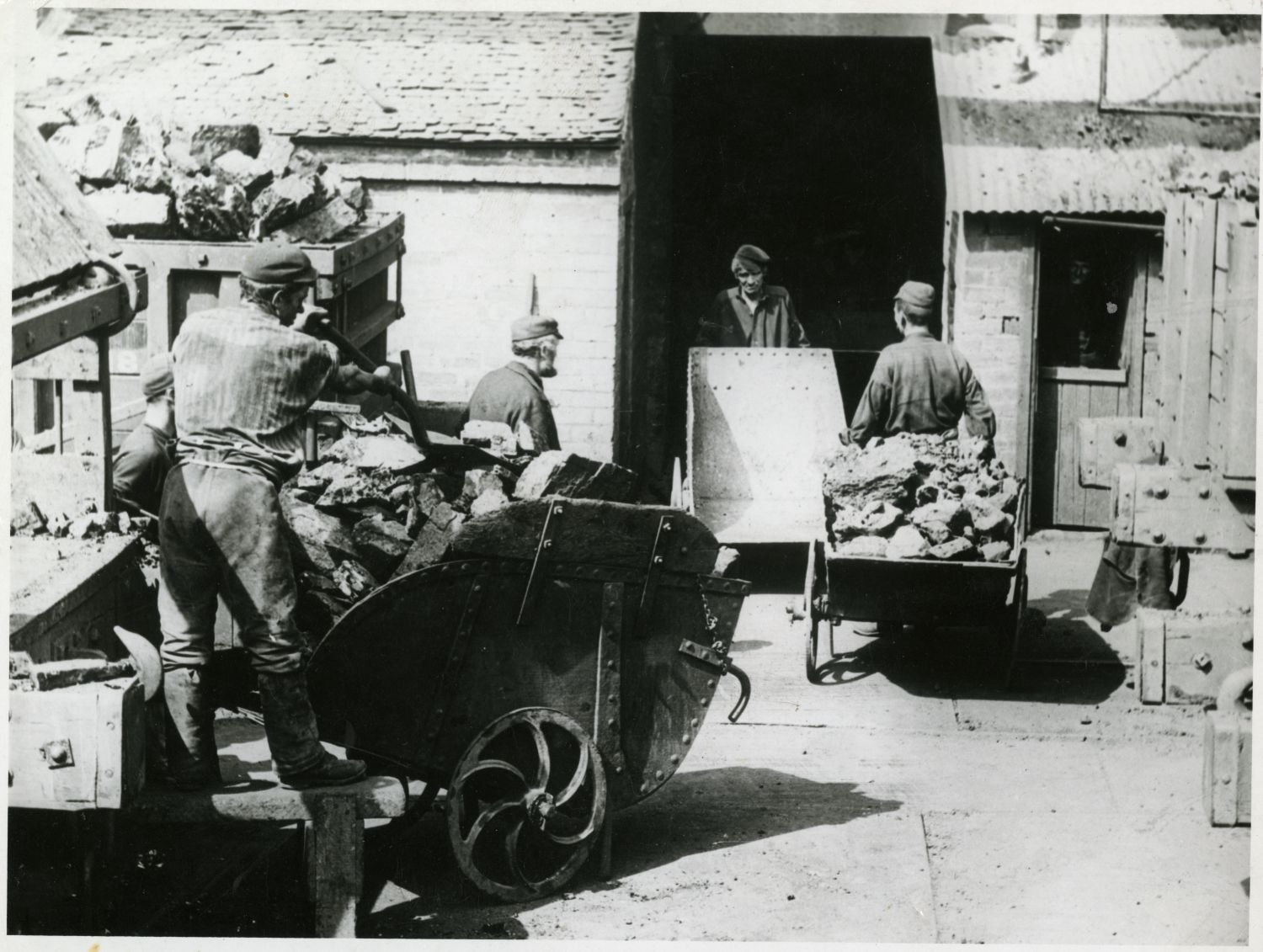 The pig iron was cast in the open air with two castings every 24 hours. The furnaces were kept in constant production until they needed maintenance.

Before the casting sand in the casting beds could be moulded it had to be cleaned up after the previous casting. Sparks from the flowing molten iron solidified into jagged shards of metal that had to be removed from the sand along with debris left by breaking up the cast metal. The sand was sieved and raked. 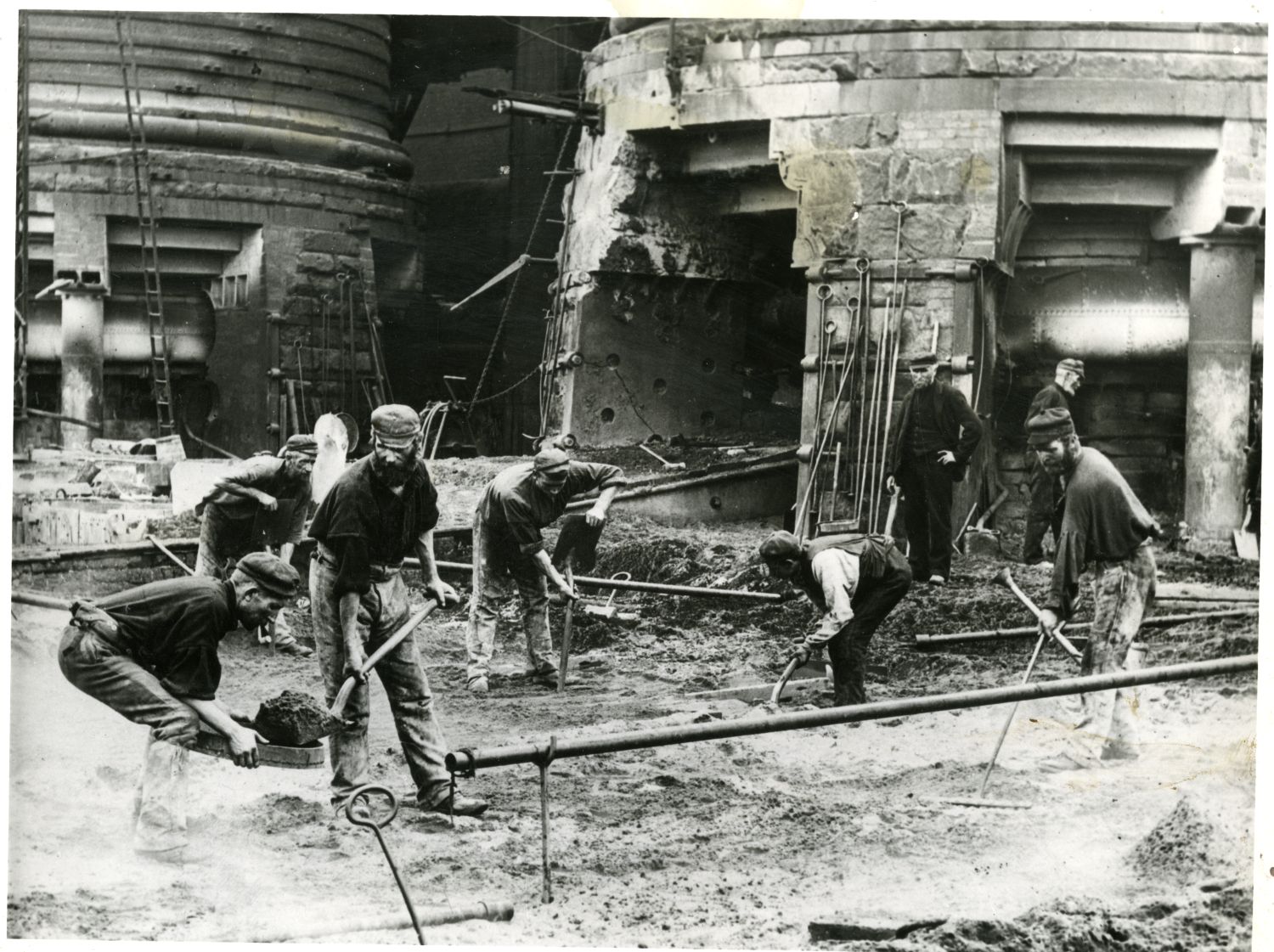 Boys were usually employed to prepare the casting beds, levelling the sand and watering it before pressing into it wooden patterns shaped like the pig bars that were to be cast. These moulds were created in rows linked by channels running between the rows. It was essential that the moulds were level so that the iron was able to fully fill all of the moulds. The boys would be directly contracted and paid by the Furnace Keeper. 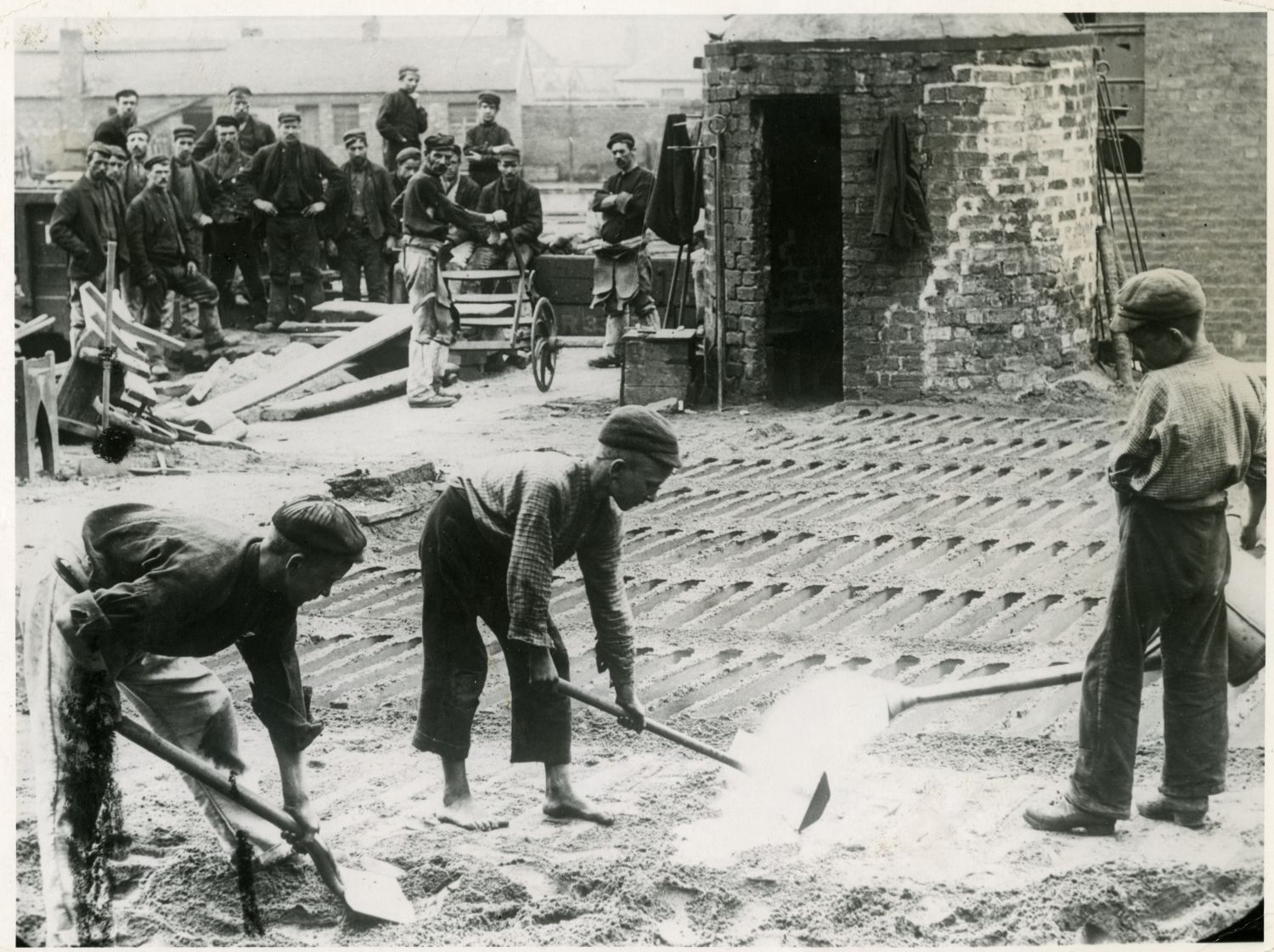 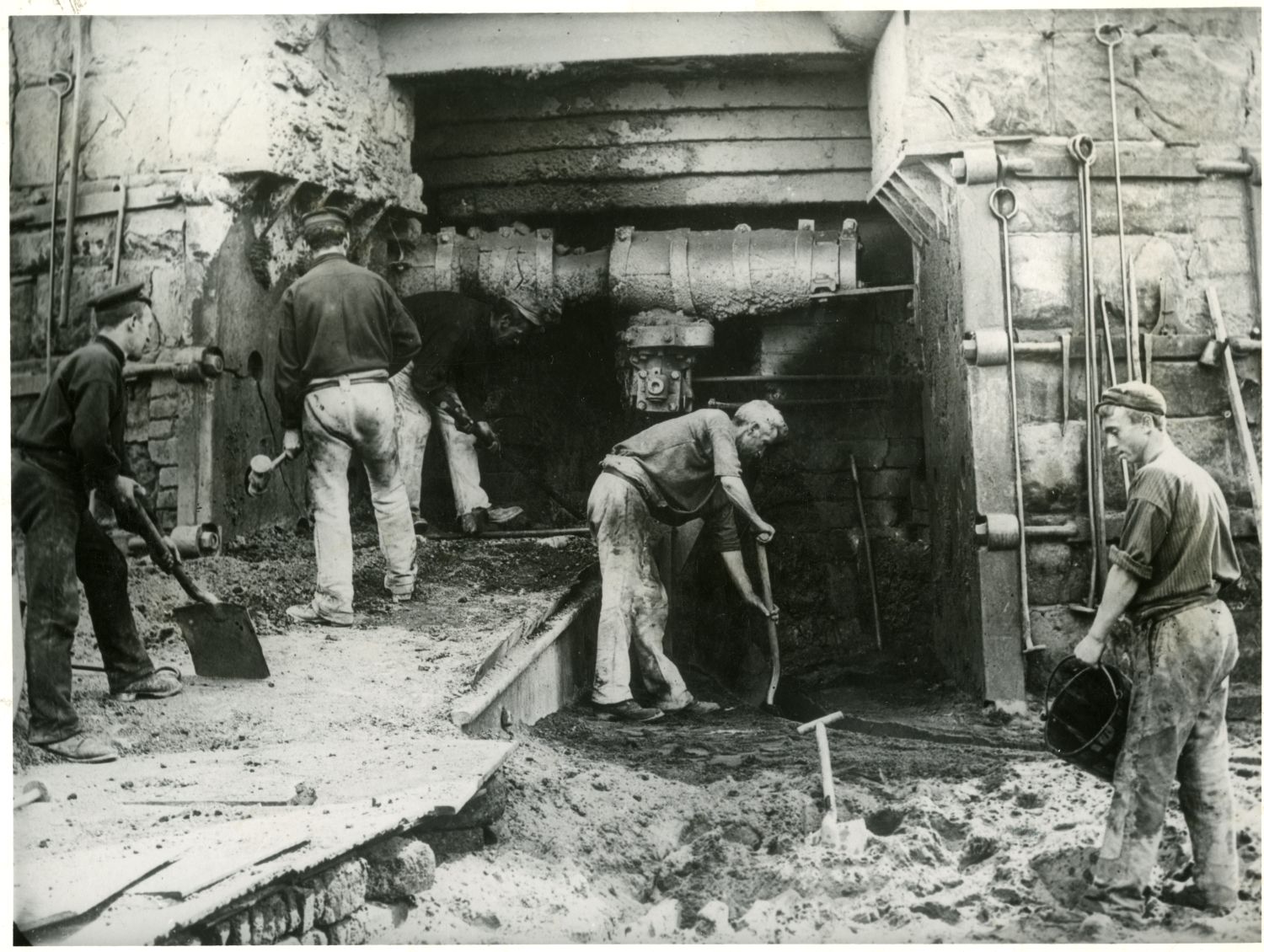 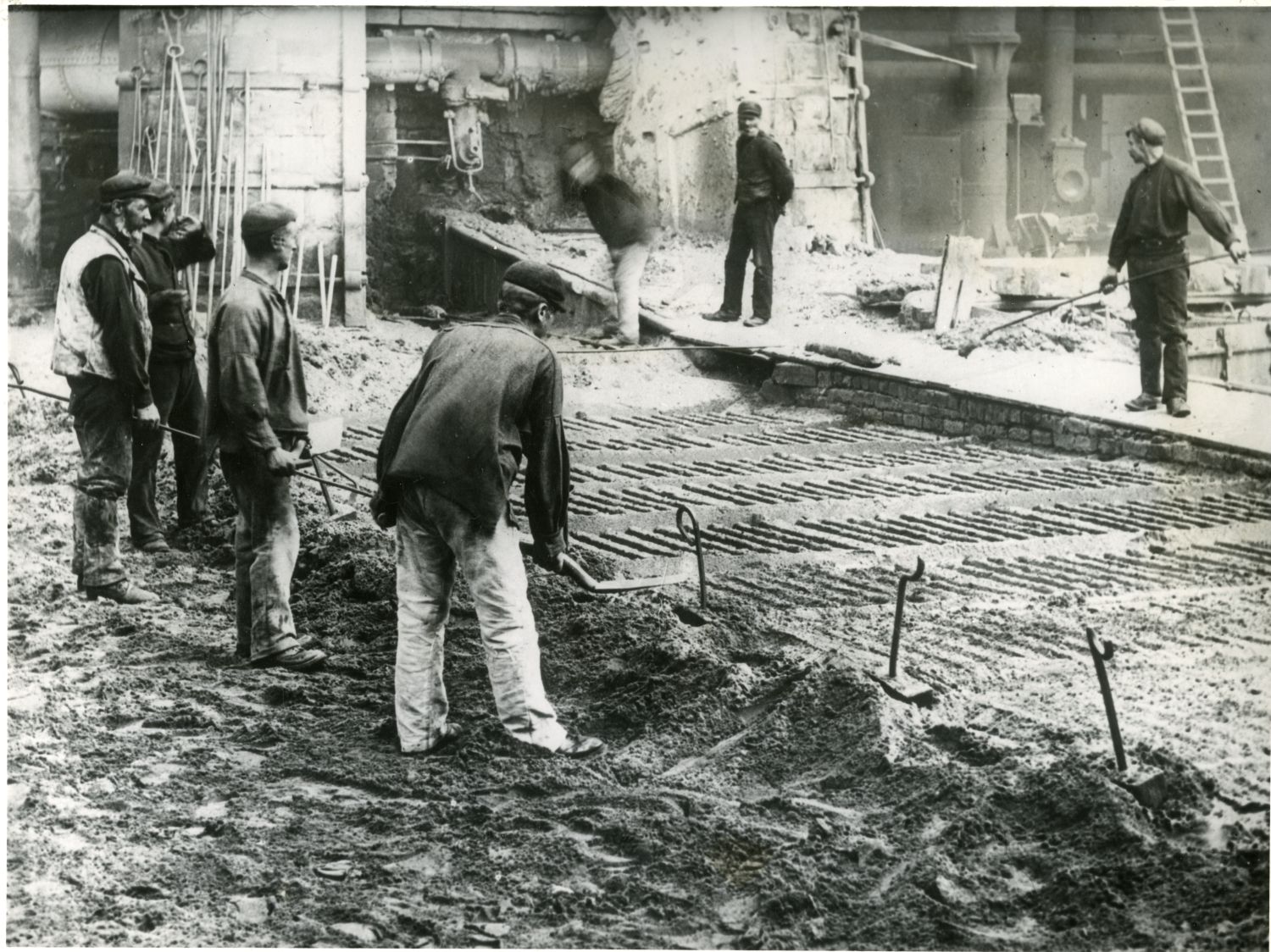 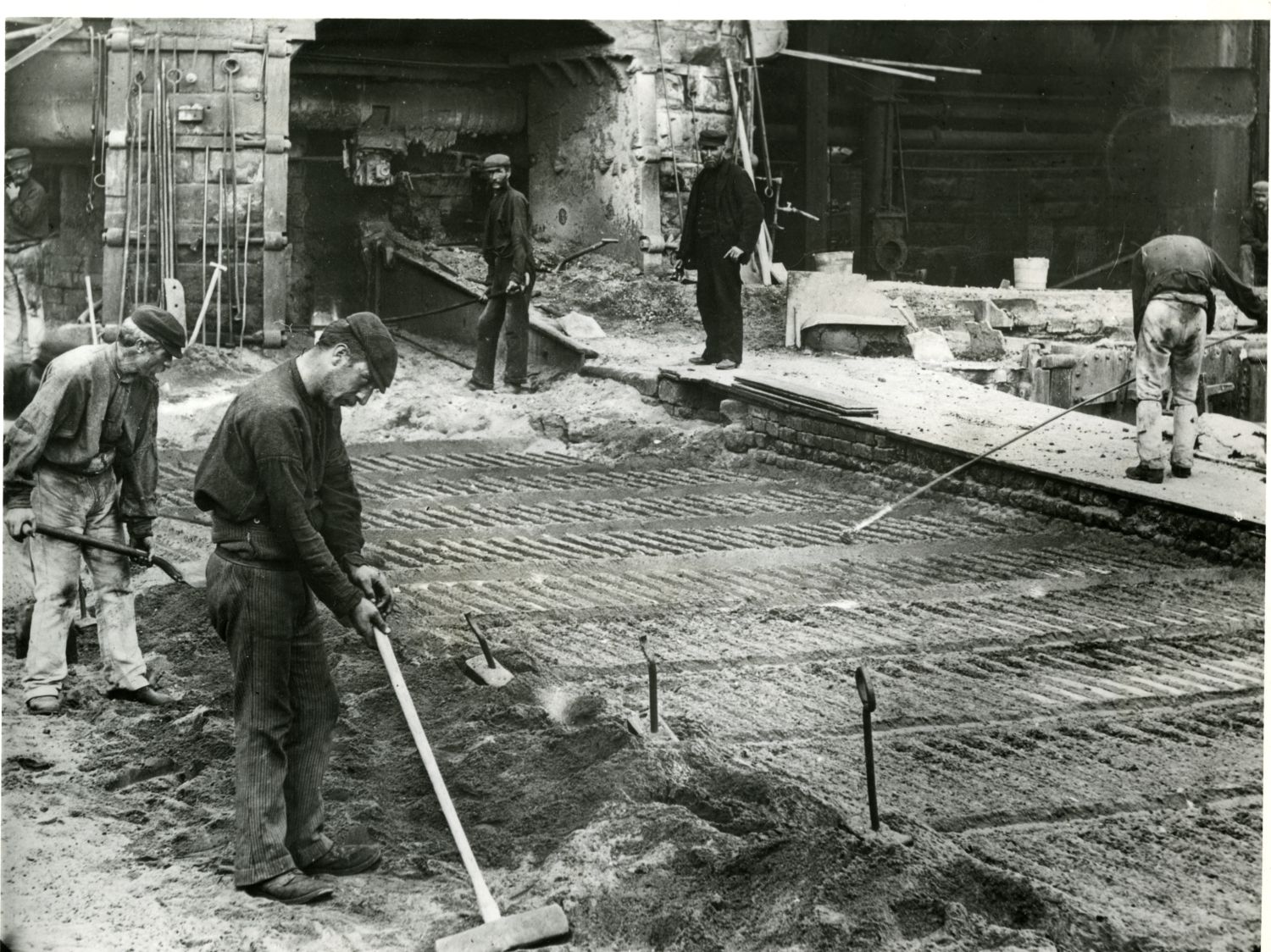 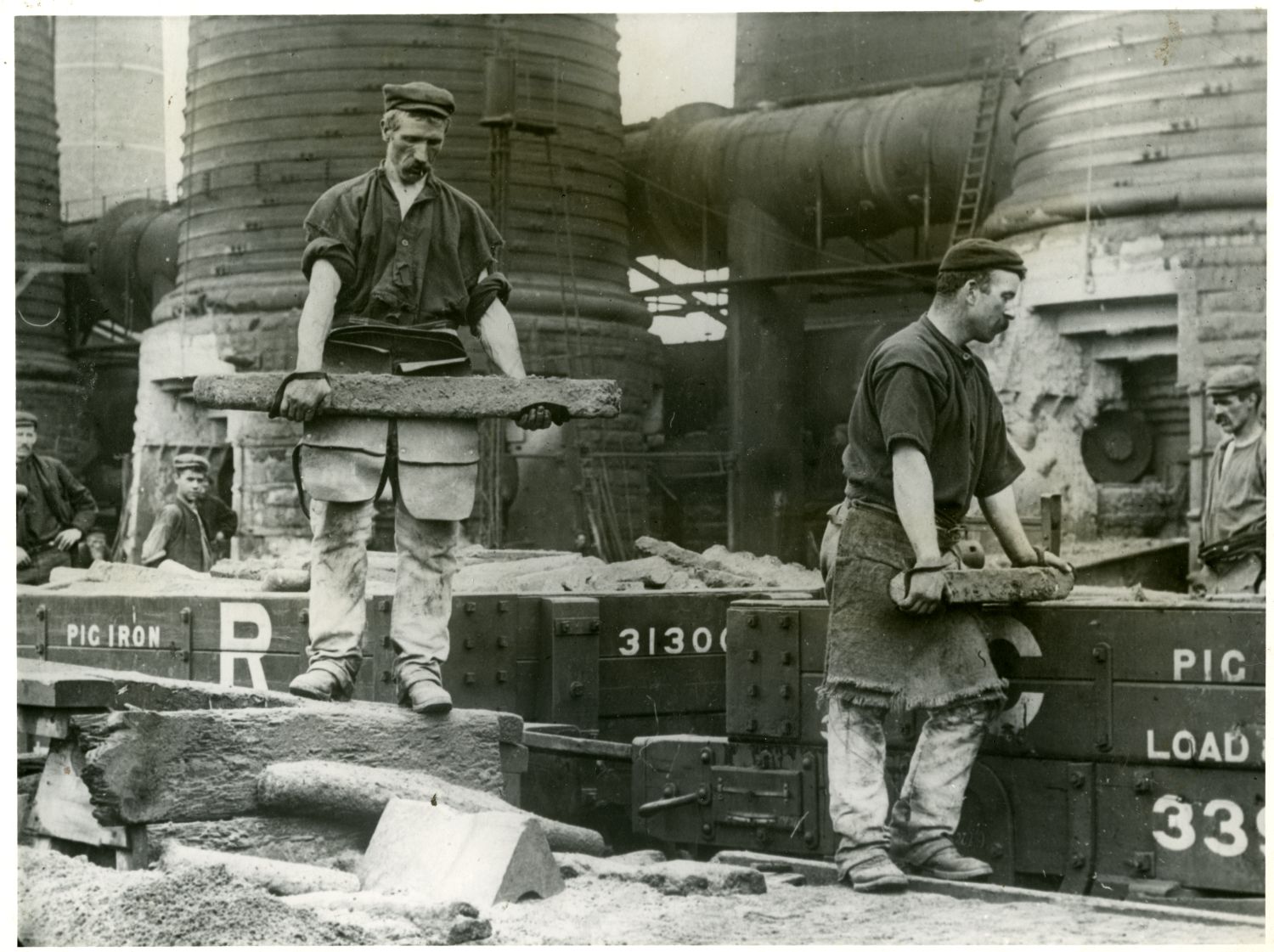 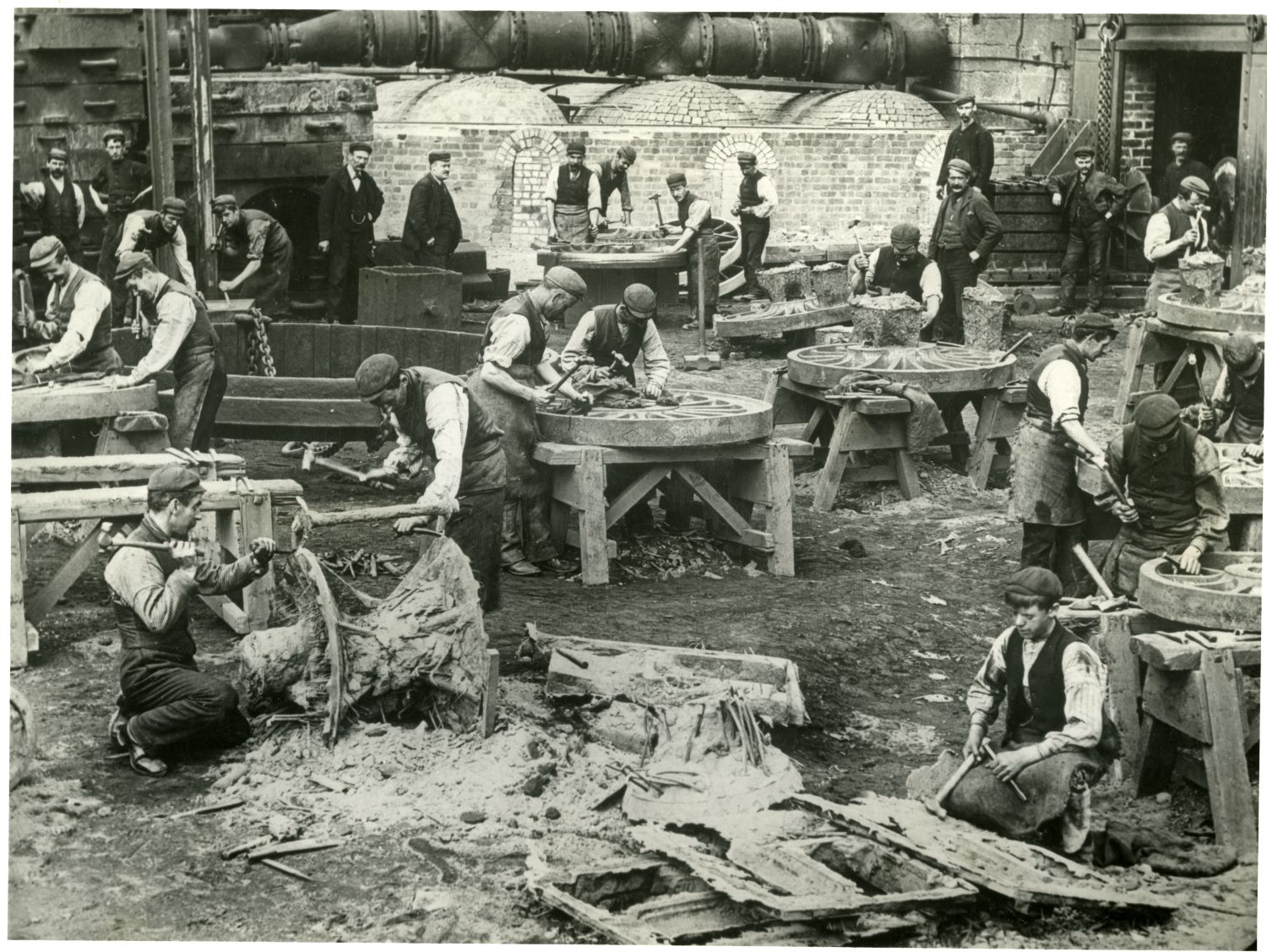 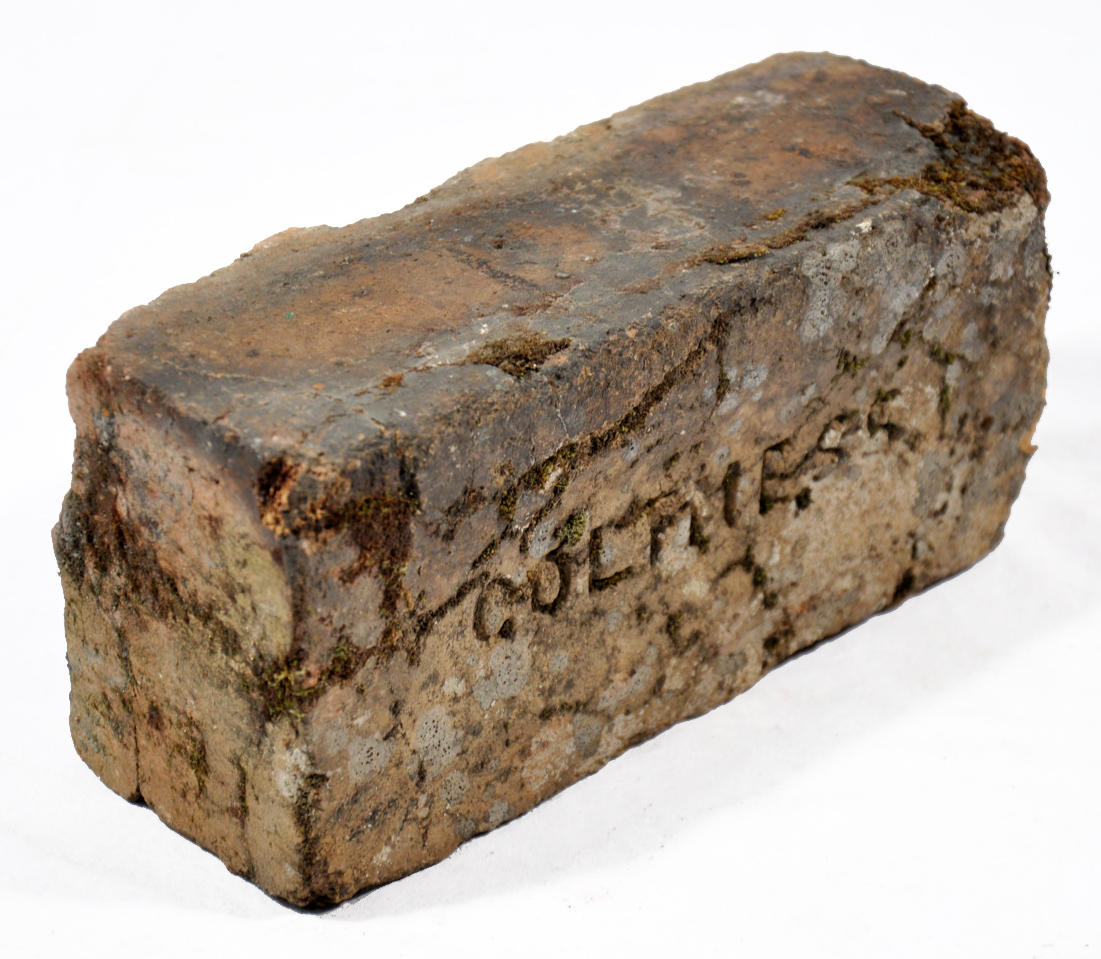 Coltness primarily made iron but in the 1890s an open hearth steel plant was added where pig iron was processed with scrap iron to make steel. The works came to specialise in making large castings such as locomotive wheels and parts for ships. The scene in the foundry led the company’s biographer, John L Carvel to write “There is nothing like this south of Mars… There is a complete absence of fuss: just quiet, casual power, as casual as the men in charge of the ladle who release the molten steel.”

A cement works was added in 1909. The company was wound up in the 1950s and today the company records are preserved in the Scottish Business Archive at Glasgow University. 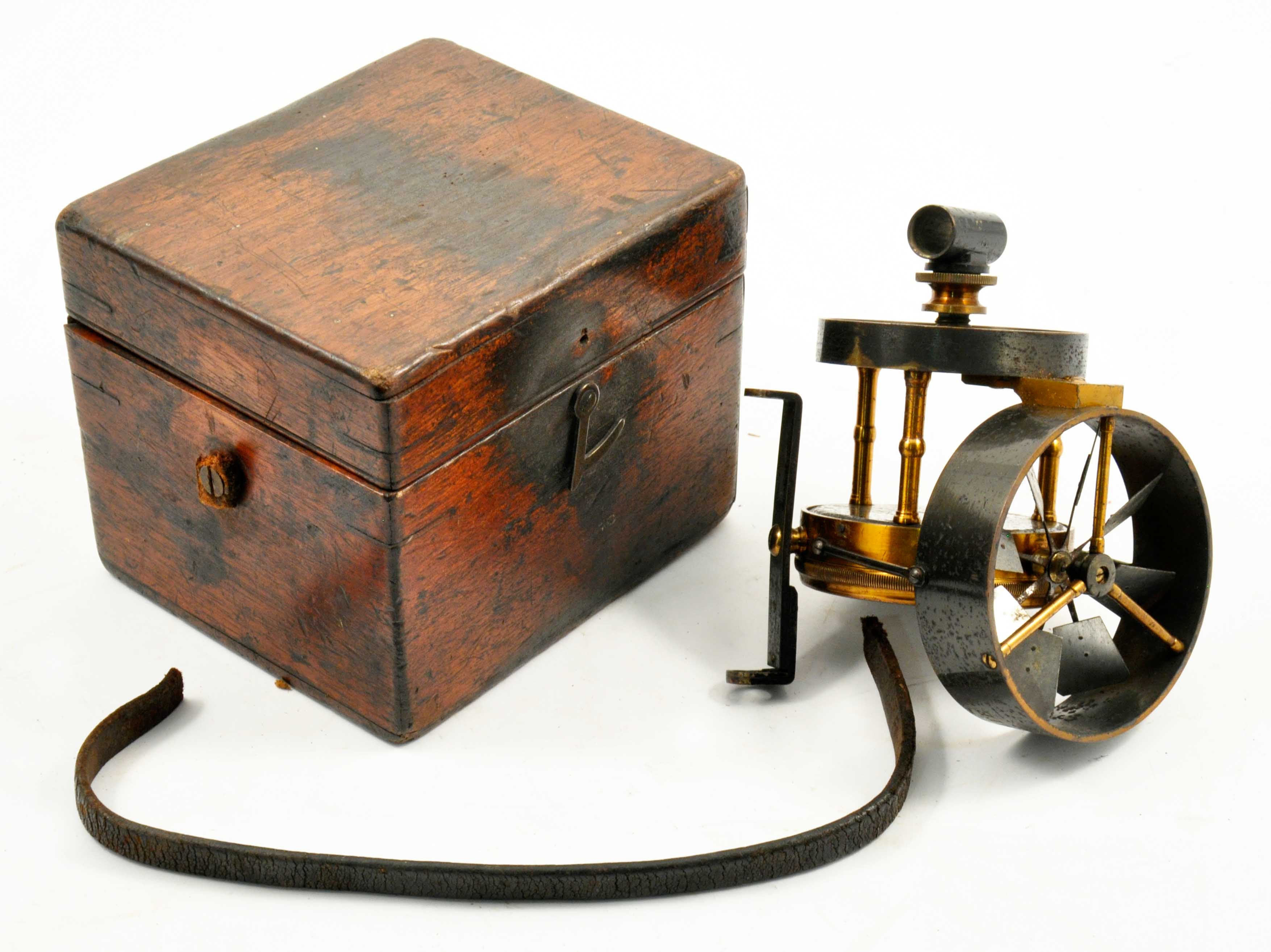