The working classes began to see an increase in their leisure and recreational time from the late 1800s onwards.  Shorter working hours and the adoption of the Saturday half day holiday encouraged many workers to play or watch competitive sport.  Men’s social clubs often provided sporting facilities. For miners and other workers within the heavy industries, public baths provided a facility for personal cleanliness as well as well-being. By the mid-twentieth century the Miners’ Welfare Building in Shotts boasted an international standard swimming pool.

Larger industrial organisations like Stewarts & Lloyds increasingly offered employees a variety of organised sport or pastimes to promote workplace welfare and to encourage greater co-operation and loyalty. Victorian social reformers, including the clergy, also regarded sporting activities as a way to improve the physical wellbeing of young people whilst tempting them away from public houses and alcohol related troubles. 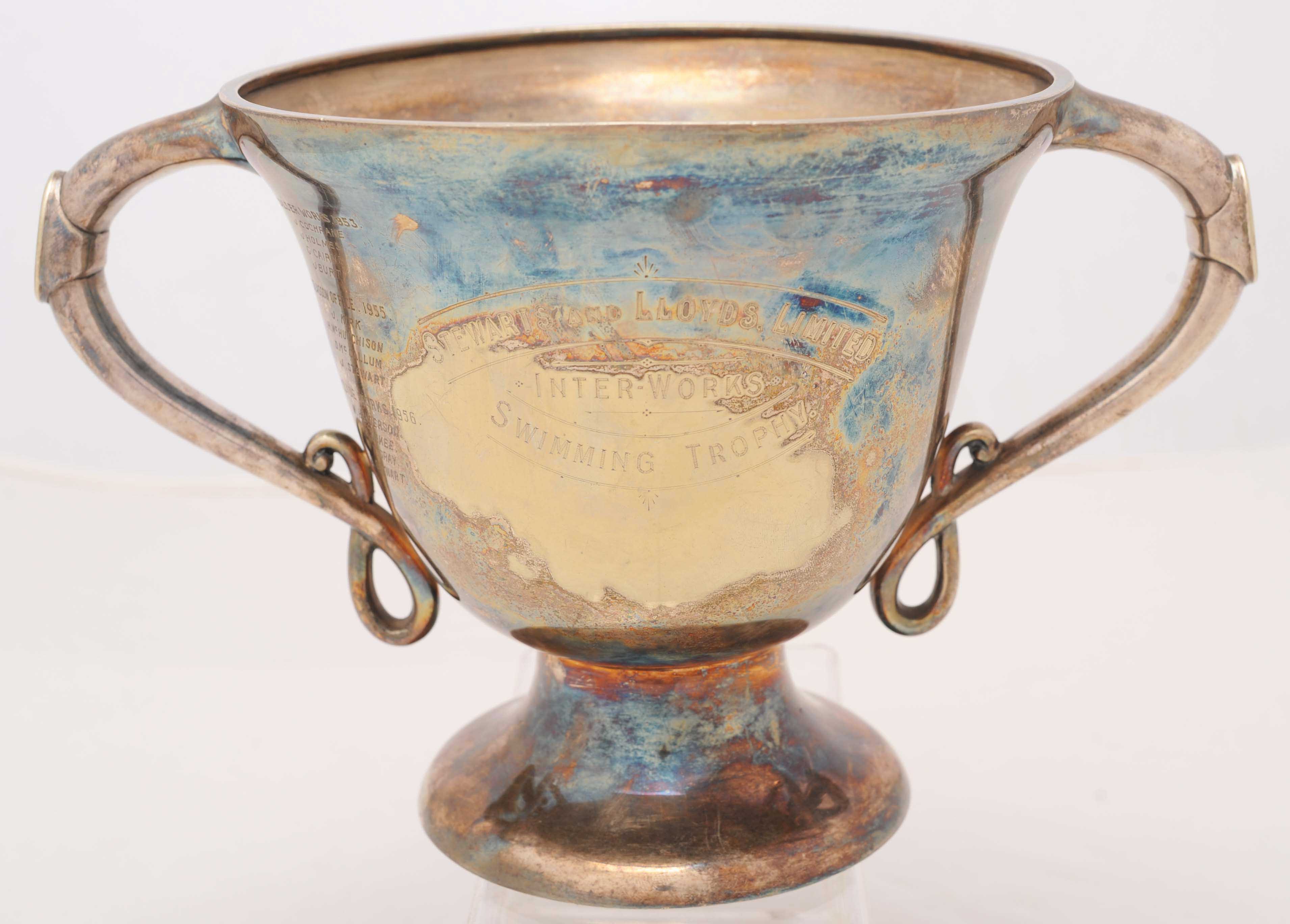 Motherwell Young Men’s Institute (YMI) formed in 1900. Closely associated with the Church of Scotland, the YMI ran social and sports clubs for young people. The YMI Amateur Swimming Club formed in July 1905 with nearly forty members, which trebled within two years, and was affiliated with the Western Counties Amateur Swimming Association. The Western Counties district contained over one hundred clubs across west central Scotland. As well as swimming clubs there were three water polo leagues of around sixteen teams each in this district alone.

As there were no local indoor swimming facilities at this time, the young men either travelled to Whitevale Baths in Glasgow or, like Wishaw YMCA, trained in the River Clyde! The opening of Hamilton Baths in February 1909 provided facilities closer to home for Motherwell YMI. It also encouraged the civic authorities in Motherwell to build their own pool, with construction taking place from 1915. The YMI swimmers organised galas in the new Baths on High Road in September 1916, a month before the official opening ceremony.

When Motherwell Corporation Baths officially opened on Thursday 5th October 1916, it was to great fanfare. The new complex not only provided locals with a brand new “swimming pond” but also a gymnasium and a set of public baths. 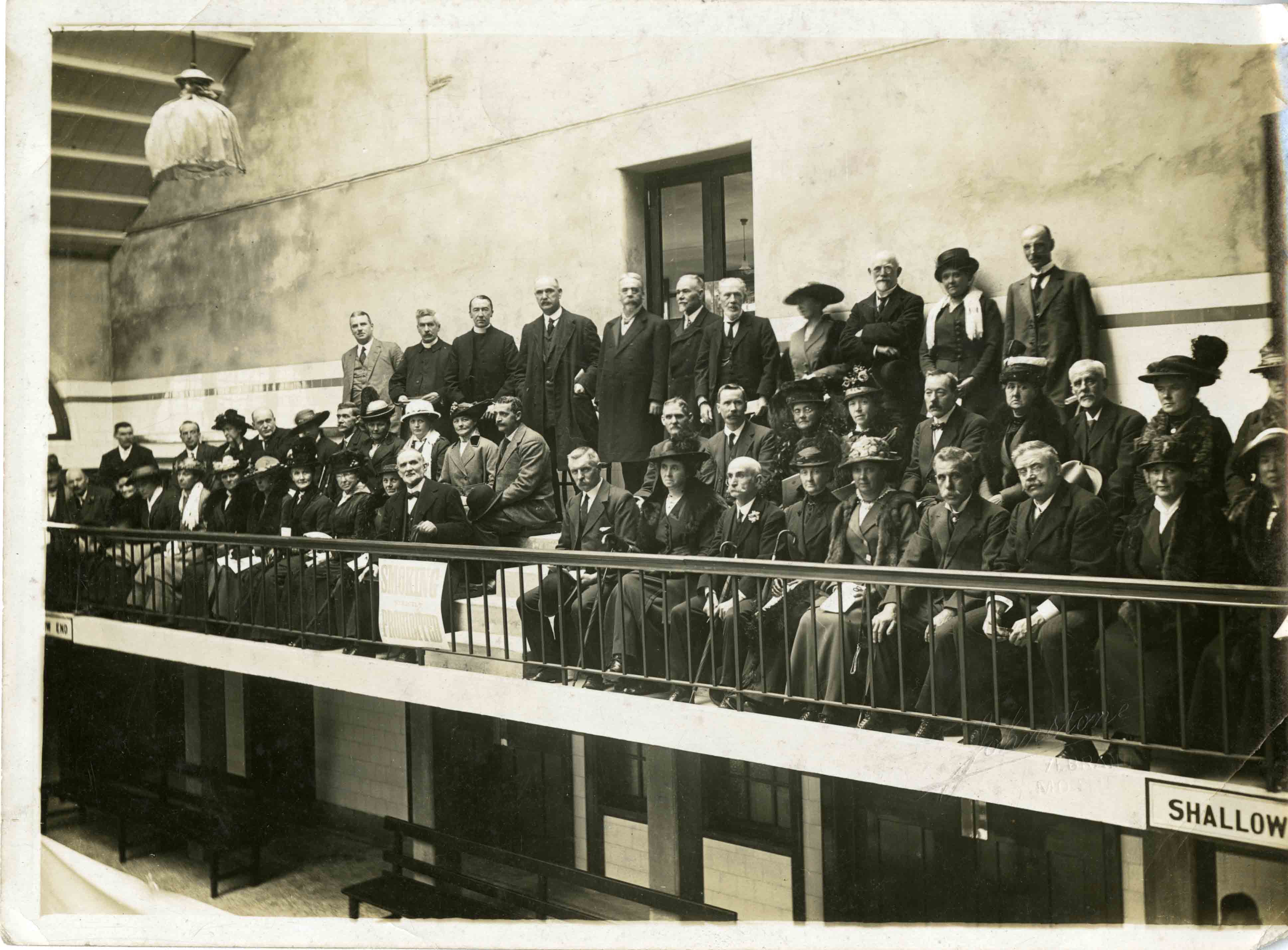 Guests of the Burgh of Motherwell Corporation Baths, 1916

Turkish baths had become trendy in the UK from the 1800s. In Motherwell, the new Turkish and Russian Baths were frequently though not exclusively the preserve of local civic leaders and businessmen. For miners and steelworkers, many of whom had no running water at home nor washing facilities at work, the Slipper and Spray Baths proved popular. In the first few months the Slipper Baths attracted up to one hundred people per day at weekends. 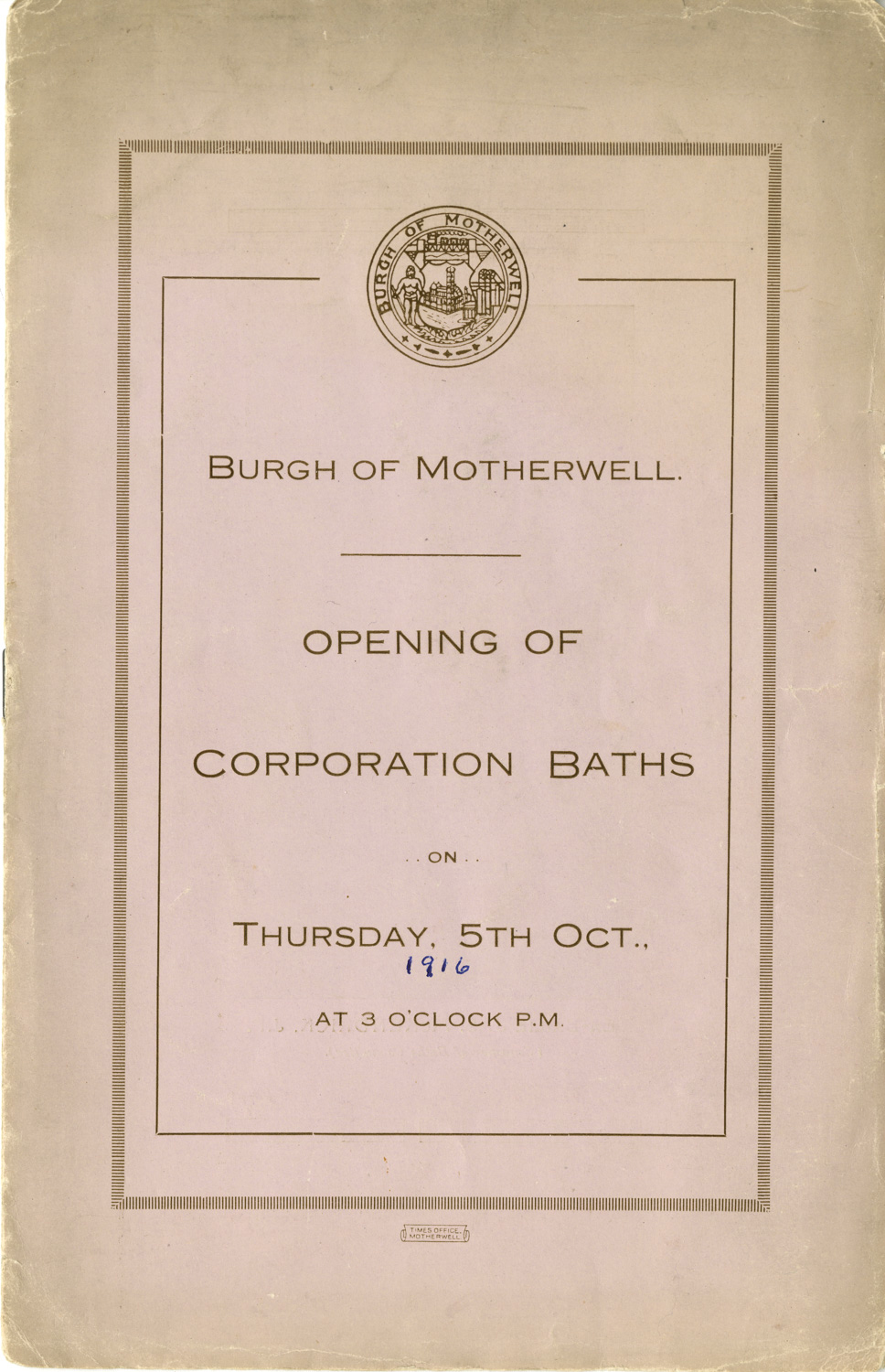 The Burgh Council had a somewhat enlightened approach to wellbeing, putting the health, strength and enjoyment of local people before profit. The Baths were run at a loss during the economic depression of the 1920s and 1930s to ensure that impoverished families were able to benefit from the amenities on offer. This was particularly important as there were few alternatives to swimming available at this time.

Those who enjoyed swimming were able to join amateur swimming clubs and participate in a range of competitive and non-competitive events – although male and female swimmers were segregated until the 1940s. Non-swimmers provided a welcome audience for events such as amateur swimming and diving competitions and aquatic gala days. 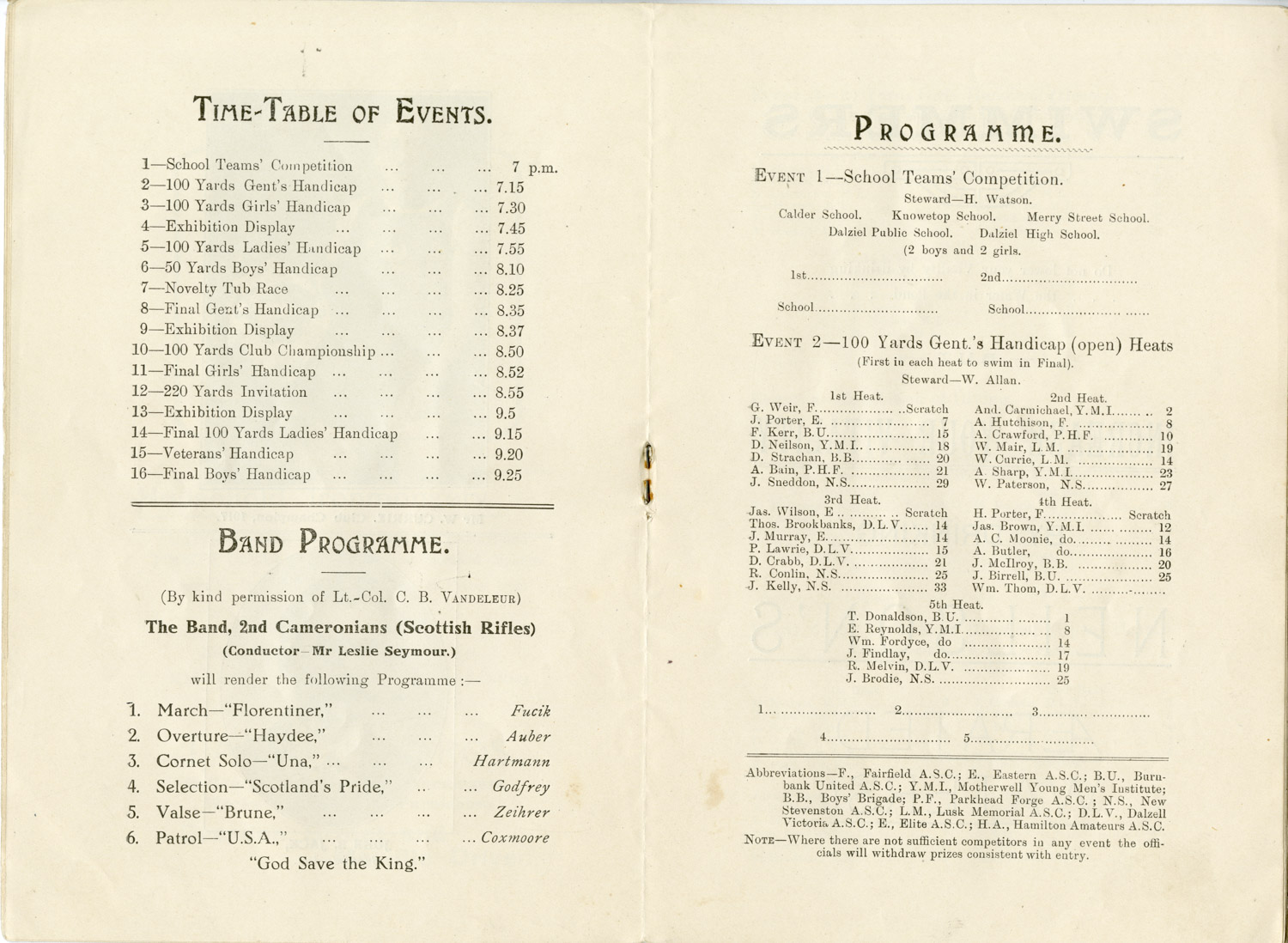 By the 1940s Motherwell Baths was notable for producing aquatic champions. Bathsmaster David Crabb coached the swimmers, divers and water polo players who graced the national and international stage from the 1940s to 1960s, taking them all the way from inter-school competitions to the Olympic Games. 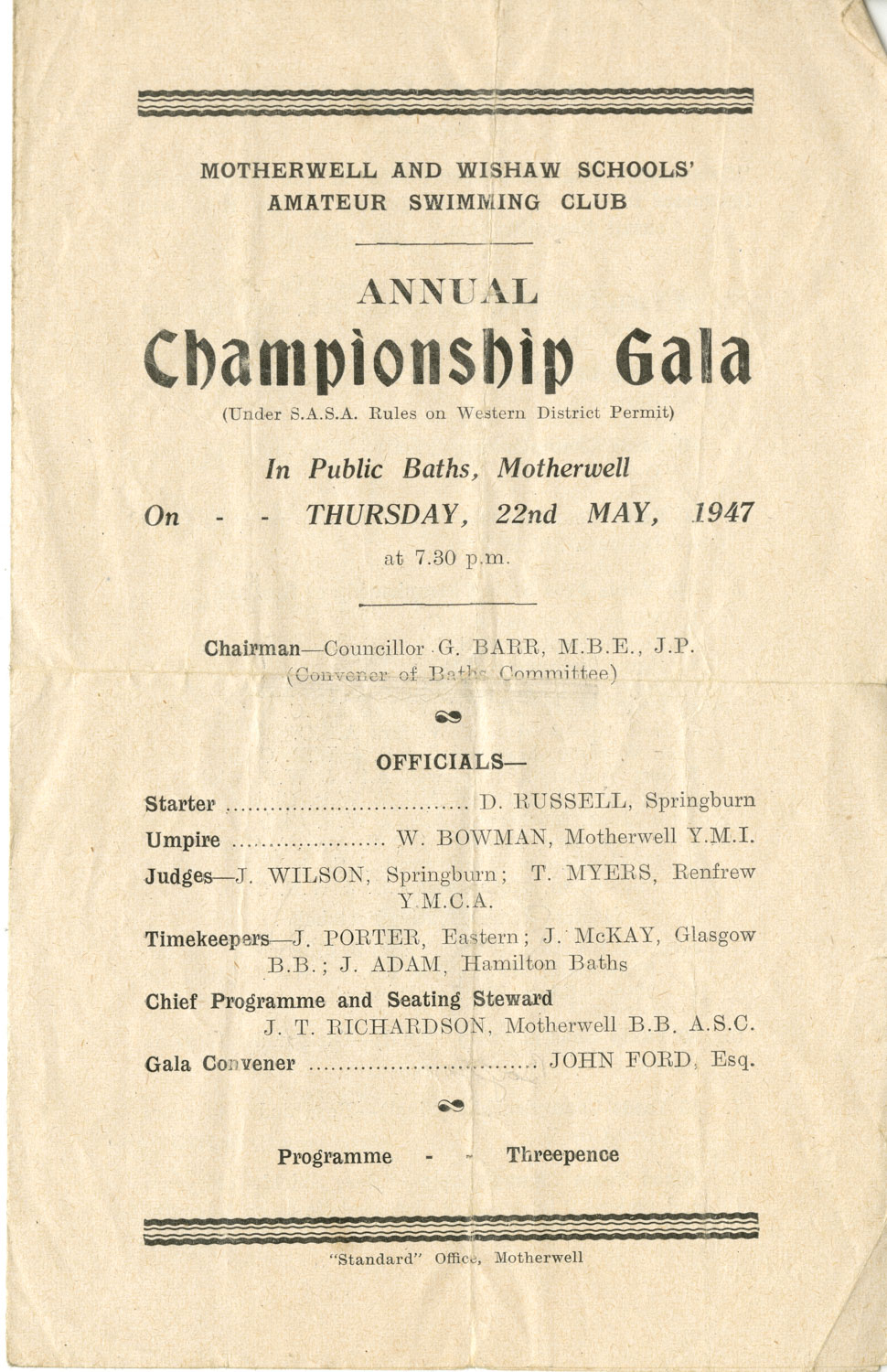 Although notable for its swimmers, Motherwell was not the only town in North Lanarkshire to boast public baths by the mid-twentieth century. Airdrie Public Baths was officially opened by the Lord Lieutenant of Lanarkshire, Sir John Knox, J.P. on 26th October 1935. This followed decades of discussions about introducing swimming facilities to the town.

The Lanarkshire Miners’ Welfare Fund contributed £7,000 towards building costs and when finished Airdrie Baths boasted a swimming pond, foot baths, spray baths and foam (bubble) baths, a large gymnasium, two club rooms, a laundry and a house for the Baths’ Superintendent. There were also 128 “dressing boxes” to accommodate male and female bathers, and the upper tier of these could be folded back to provide additional space for spectators during competitions and galas. The pool itself was fitted with an underwater lighting system and gramophone apparatus.

Coatbridge Municipal Baths and Swimming Pond opened on 11th May 1938, less than three years after Airdrie Public Baths. There was a hiatus during the Second World War and post-war years but thereafter more swimming facilities were introduced in the North Lanarkshire area.  Wishaw Baths opened on 2nd February 1965 and Bellshill Baths followed on 28th May 1966. 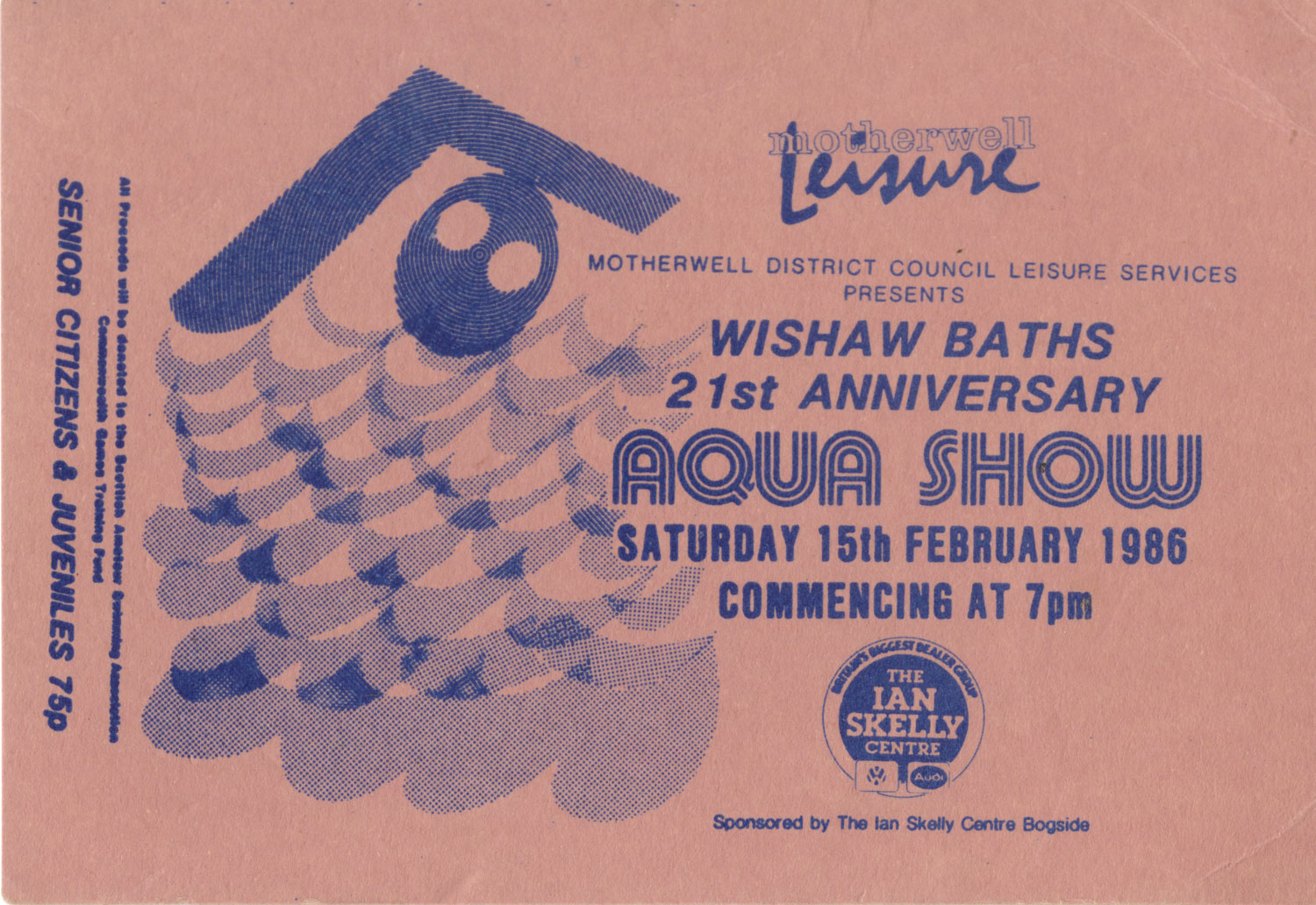 Motherwell Baths closed in 1989 and was demolished in 1994. Motherwell Heritage Centre was built on the same site, opening in October 1996. It was re-branded North Lanarkshire Heritage Centre in 2012 and now holds many wonderful items in its museum and archive collections that reflect Motherwell’s illustrious swimming history.

The Airdrie Cotton Works Fire: Fire Safety in the 1800s