A Factory on Fire

On the week of Valentine’s Day in 1839, newspapers from London to Dublin to Sydney ran the same story: “We are sorry to state” they all begin “that Airdrie Mills were yesterday morning burnt to the ground by fire.” 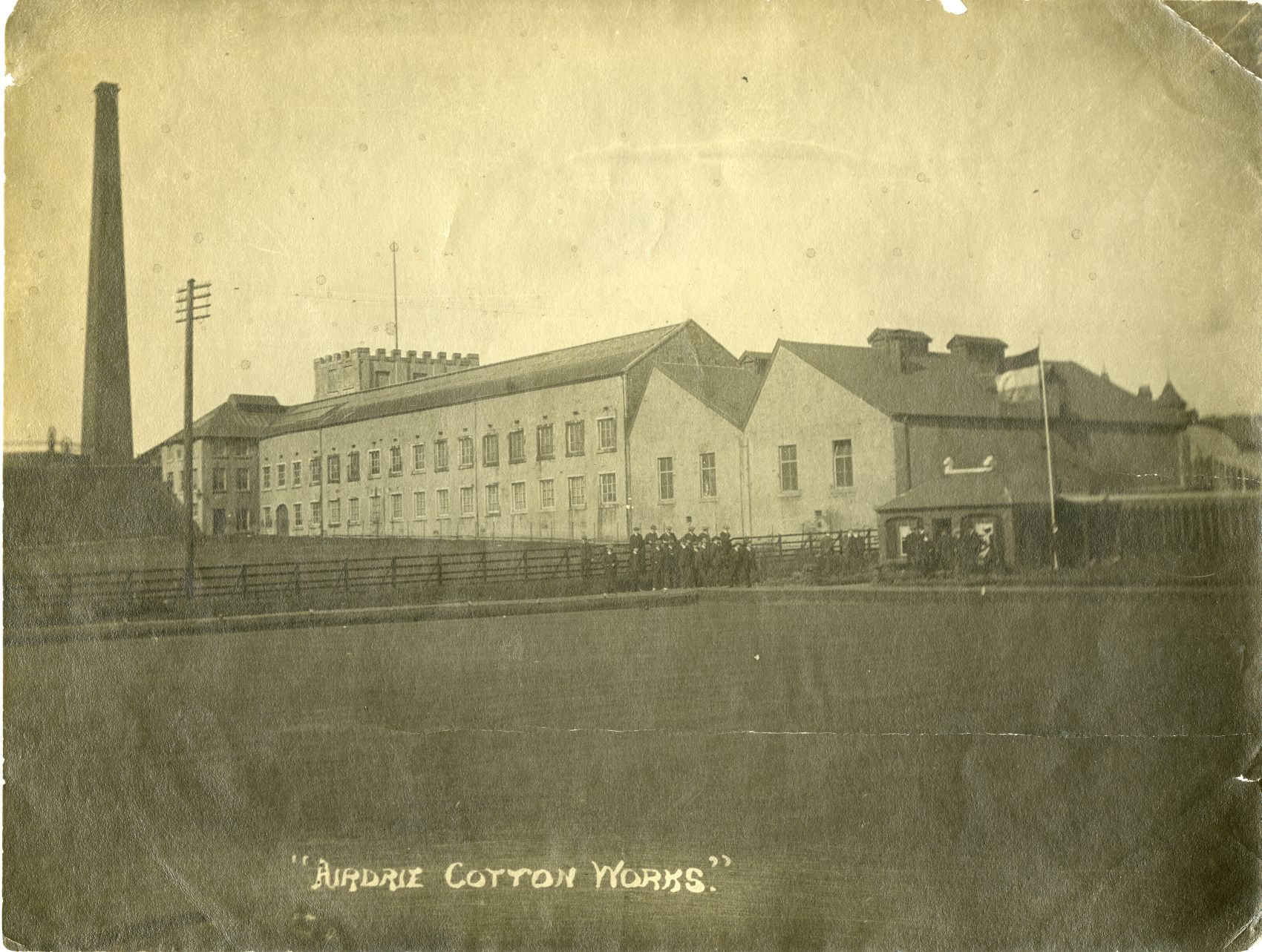 The fire had started early in the morning on Wednesday, February 13th, just before the workers arrived to start their day. It would have been dark at that early hour of the winter, so the flames were quickly spotted. But it was already too late.

Gas had started the fire – possibly from the building’s gas lights. Surrounded by fuel, it spread rapidly. The flames tore through the bales of flammable cotton and up the six floors of the Works. As the workers watched in horror, it grew into the largest fire the district had ever seen.

The London Courier and Evening Gazette paints a particularly vivid picture of the event:

“The appearance of the fire, when the conflagration was at its highest, was truly grand and horrific; the whole sky for miles around exhibited one sheet of vivid light and when the roof and walls fell in, the dense smoke that arose presented an appearance as if the earth had opened to allow the pent up volcanic ether to issue forth to terrify and destroy.”– 14 February 1839

In a few hours, the main building of the Cotton Works was completely gutted. Fortunately, the area where the fire had started was quickly cut off from the rest of the plant. The factory was not completely lost, but the same could not be said for its fleet of new spinning machines. 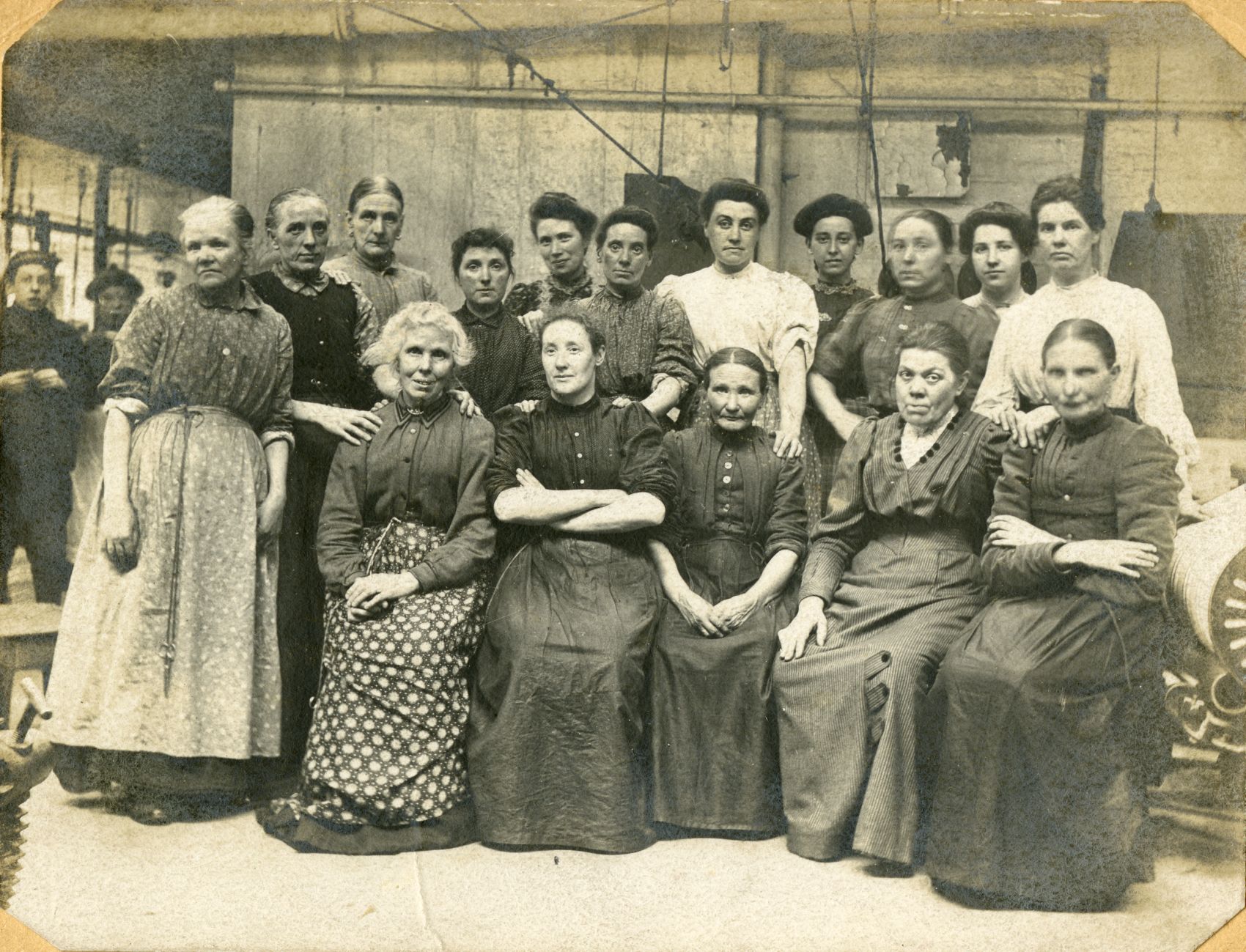 In the cold months of winter, a workforce composed of mostly of women and children was suddenly and unexpectedly out of work. It was an certainly a disaster for these underpaid spinners, but fire in North Lanarkshire was hardly a new occurrence.

Fire Safety at the Works

Factory fires were a regular part of life in the 1800s. Working conditions were perilous and fire safety measures were poor. 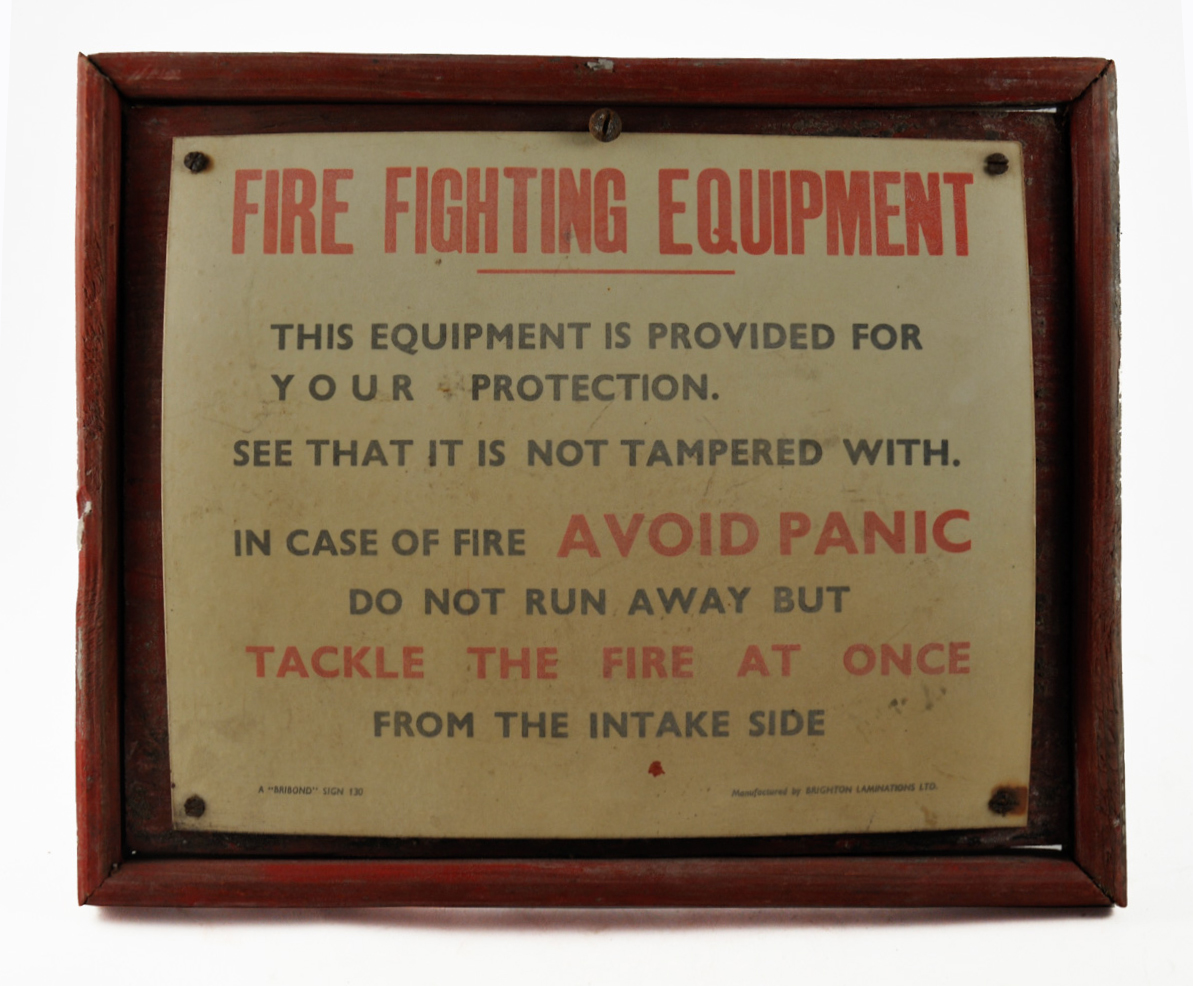 Cotton mills were particularly vulnerable to fire. Not only was the cotton highly flammable, but the wheels of the spinning machines had to be oiled twice a day to keep them working. Add to this the heat of machinery, gas lighting, sparks from machines caching or breaking, and the popularity of cigarettes, and fire was more or less inevitable. 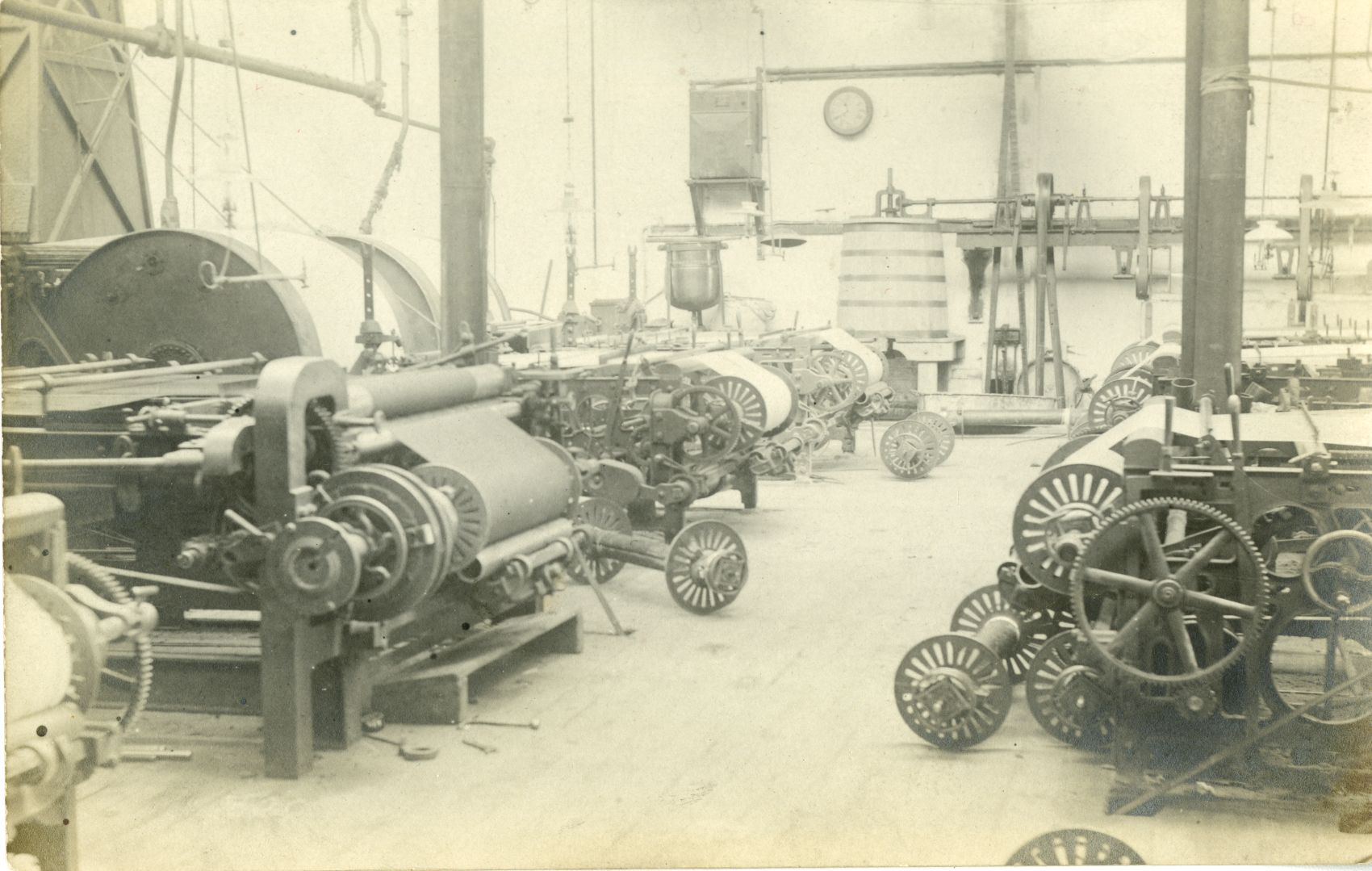 Moreover, work was hard, and hours were long. It was normal for weavers to work twelve or fourteen hours a day and fatigue could easily lead accident. A foreman at the time remarked that accidents were most likely to happen at the end of the day when workers were tired.

Fire safety measures were also fairly minimal and largely ineffective against a fast-spreading fire. The modern dry-powder fire extinguisher was invented in 1818, but such technology was expensive and would have cut into profits.

In 1841, for example, the Lancefield Spinning and Weaving Works in Glasgow caught fire. The factory had a fairly robust fire safety system for the time: buckets of water located in the building. But with all the oil and cotton, these were not nearly enough. The factory burned to the ground.

From the Collection: Fire Extinguishers

The fire extinguishers in the North Lanarkshire Council museum collection are from the early 1900s, but even these rely on fairly simple firefighting technology. 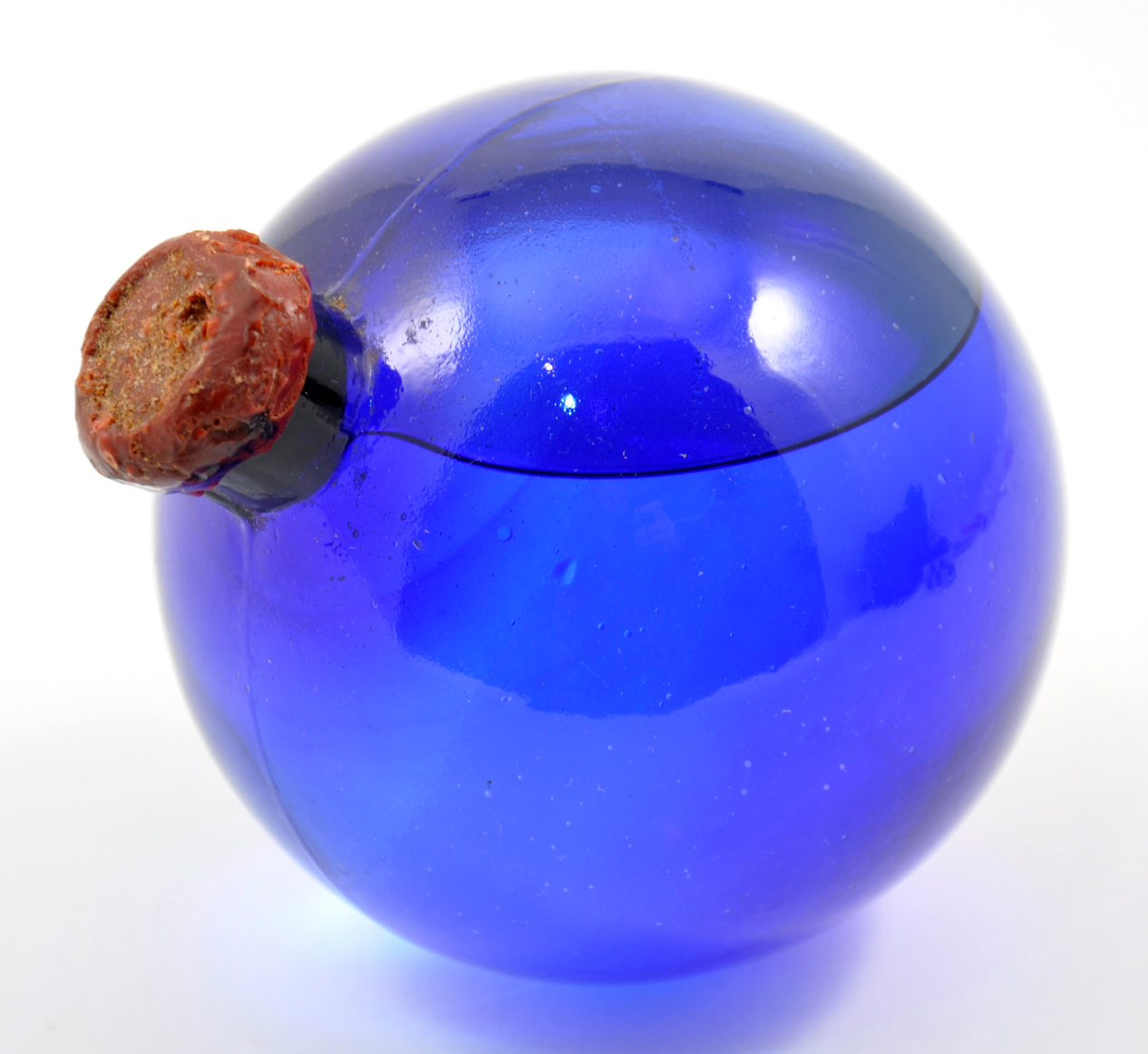 One is a “glass grenade.” It was an ancient technology that had been re-invented in the 1860s during the American Civil War. Small glass containers were filled with water, saltwater, or carbon tetrachlorine. When a fire broke out, they could be hurled at the flames.

But even if the Airdrie Cotton Works had had a supply of these yet-to-be re-invented grenades, it is unlikely that the factory could have been saved. They are only useful at the beginning of a fire and, of course, they rely on a fairly good sense of aim. 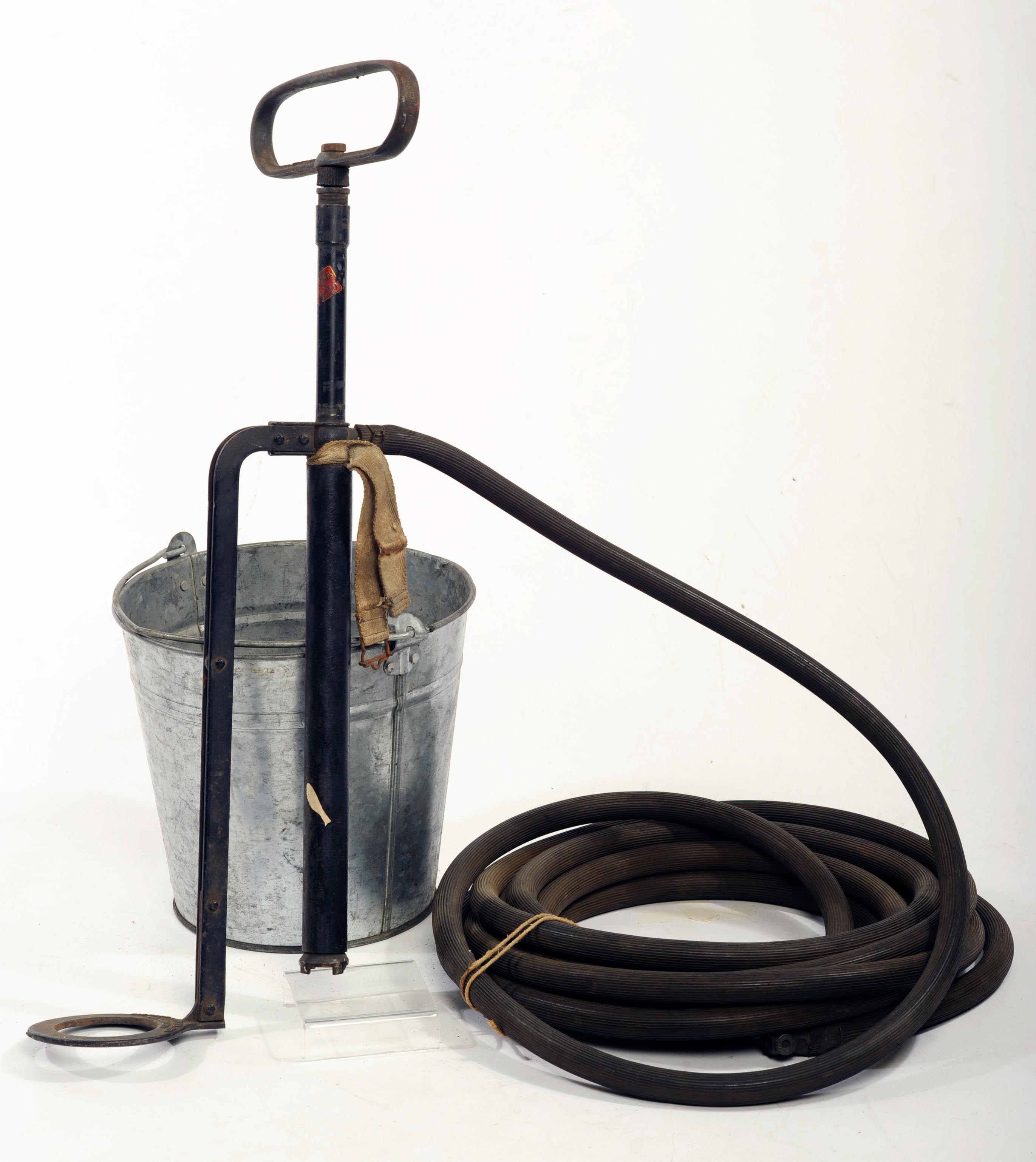 The second fire extinguisher is a stirrup pump from the Second World War. These were used during the Blitz to put out incendiary bombs and the subsequent fires. The pump has a small pedal to keep the whole system steady. The operator then pumps the handle like a bike pump, and it funnels water through the hose.

Though commonly used during the War, the technology is quite old.  It has been used to fight fires since at least the 1600s. Yet like the glass grenade, it works best for small fires. It would have done little to save the Cotton Works from destruction.

Unlike today, in 1839, there was no municipal fire department in Airdrie. When Airdrie’s courthouse caught fire in 1858, there was still no fire engine to be had. Instead, messengers were sent to Glasgow and Coatbridge for their engines. It took the Glasgow engine 45 minutes to get to Aridrie – but by then, the roof of the courthouse had already collapsed.

In the 1860s the burgh finally got an engine of its own. A local businessman, Mr. Wyllie, bought a wheelbarrow fire engine which was operated by his regular employees. Unfortunately, this meant that if a fire started outside of work hours, this engine could not respond until Mr. Wyllie first tracked down his workers at home.

Even when the burgh finally acquired a horse-drawn fire engine, it had no designated horses. Instead, they would have to be borrowed from the undertaker, W. Paterson & Son, Funeral Undertakers. 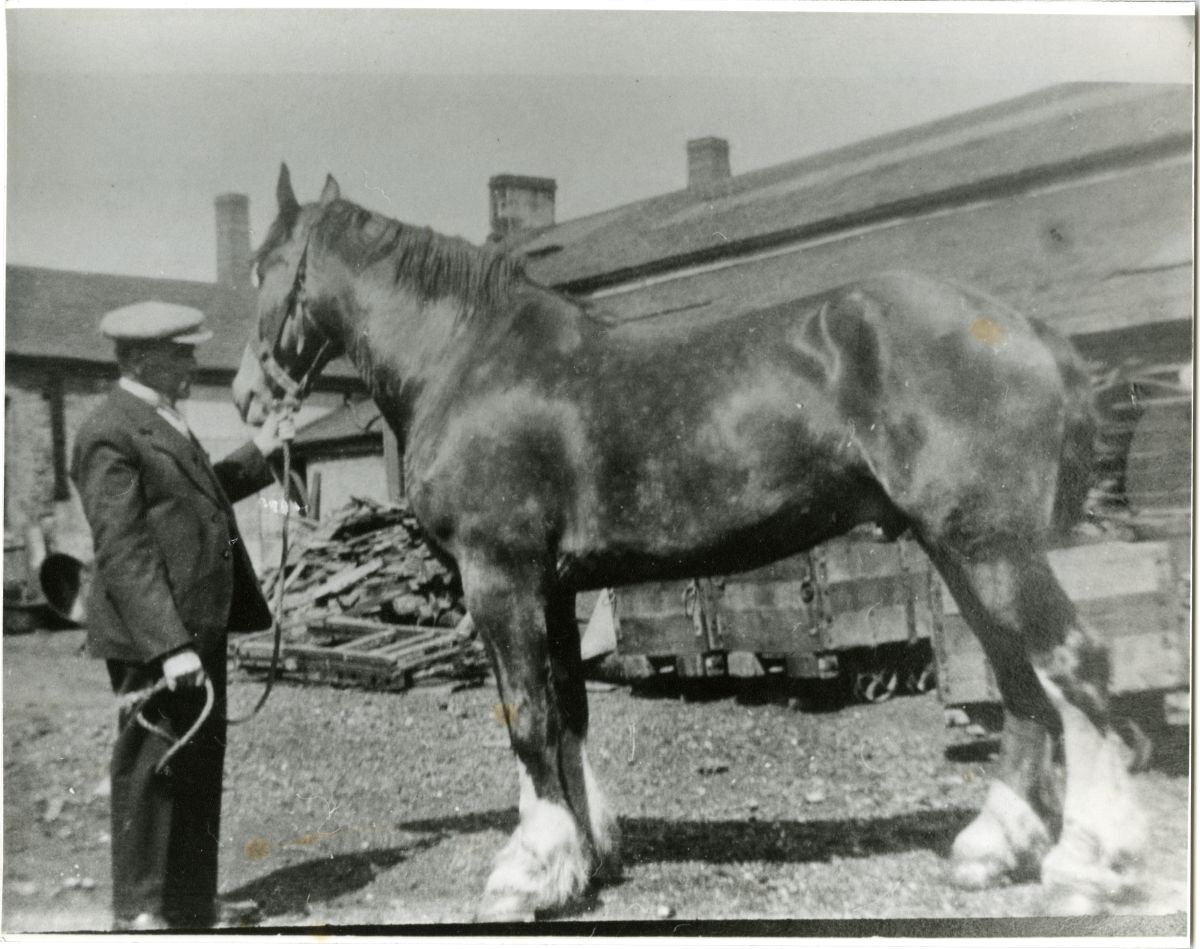 Man with a Clydesdale Horse at Summerlee

Unsurprisingly, this system was too slow to respond to factory fires where highly flammable material was present. In 1870, the Glengowan Print Works, near Airdrie, caught fire in the early morning. Though Airdrie had a fire engine, the response was much too late. Within a few hours, the Printing Works and £12,000 of property was completely destroyed.

It was not until 1919 that Airdrie had anything that could respond fast enough to stop a major fire. The burg purchased a motorized Dennis Fire Engine with solid tires that was housed at the Police headquarters along with the ambulance and police traffic vehicles. Around this time, the fire services became part of the police department, allowing for more organization and a faster response times. 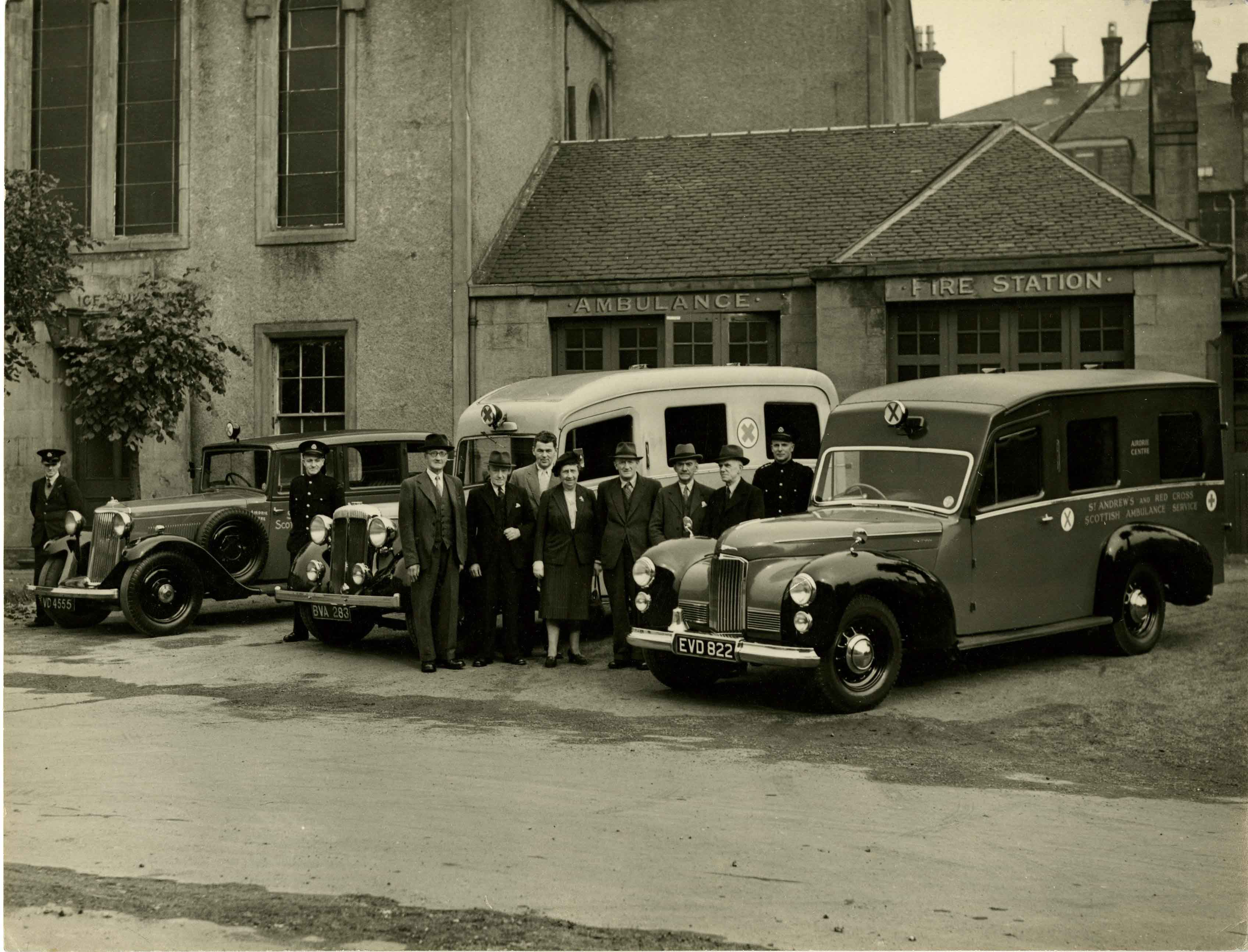 It was the Second World War that would at last bring the firefighting services we know today. In 1938, an Auxilliary Fire Service (later the National Fire Service) was formed to help counter the risk of fire during the war. Groups of mainly volunteers received training on how to put out fires and were issued with standard equipment. 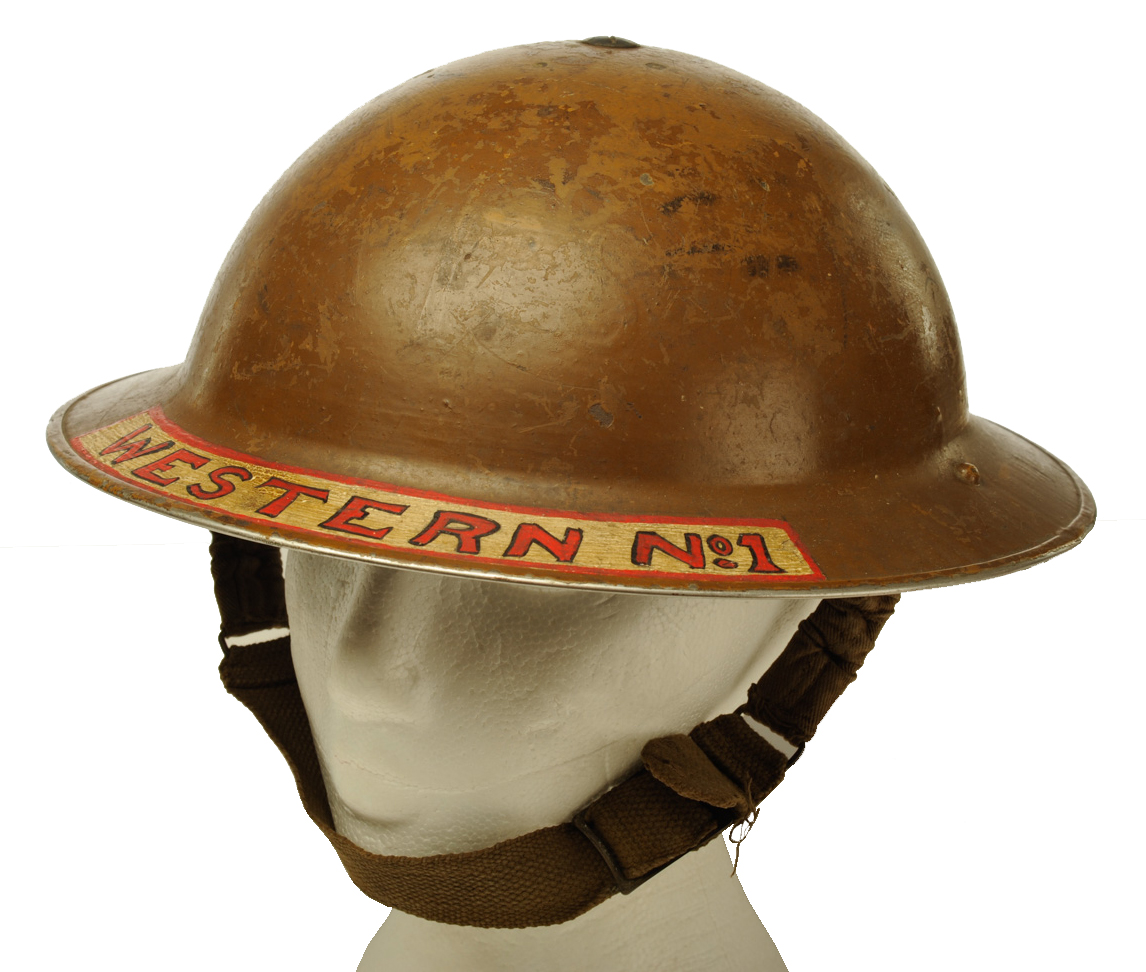 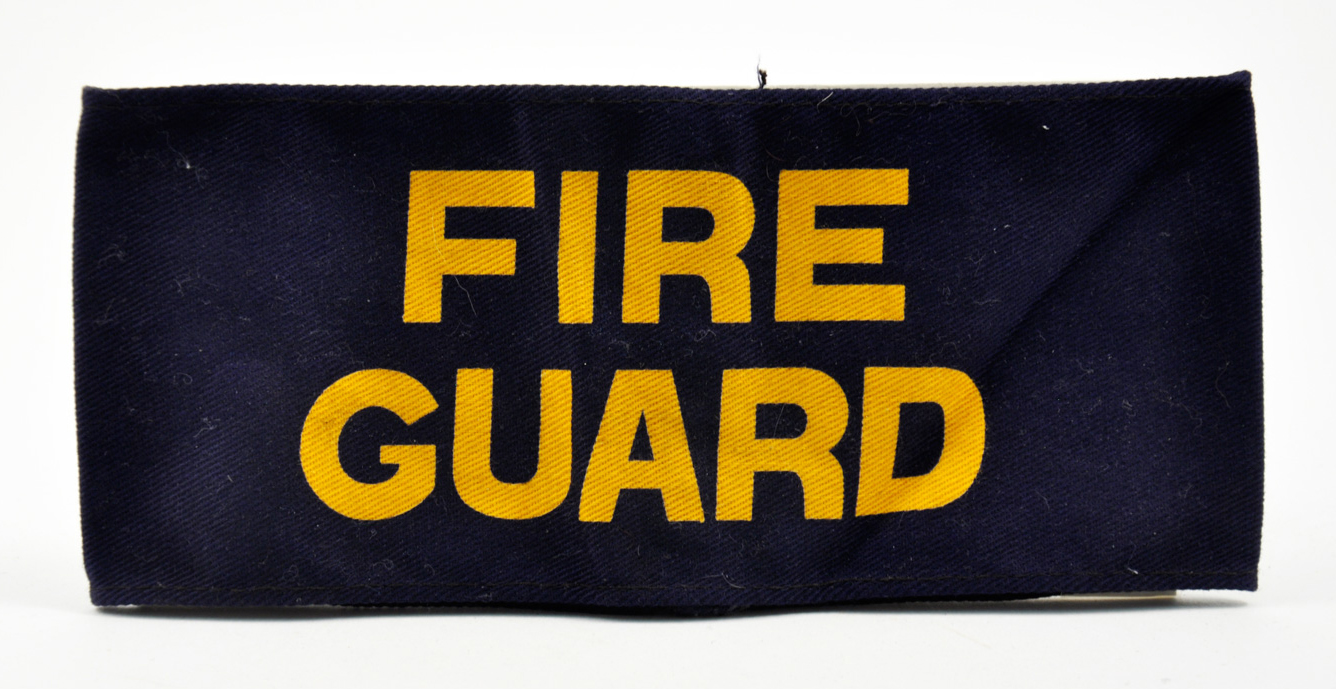 After the war, local governments had the equipment and trained personnel to fight fires more effectively. The Lanarkshire Fire Brigade formed in 1948.

Without proper fire safety measures or trained firefighters, factory fires had the potential to be quite deadly. In 1828, a fire at a cotton mill in the town of Johnstone killed six workers. Caught in the upper floors, there were no fire escapes down which workers could flee. The best the fire crew could do was to keep the fire from spreading, and so the workers had to escape by risking the leap from the windows. 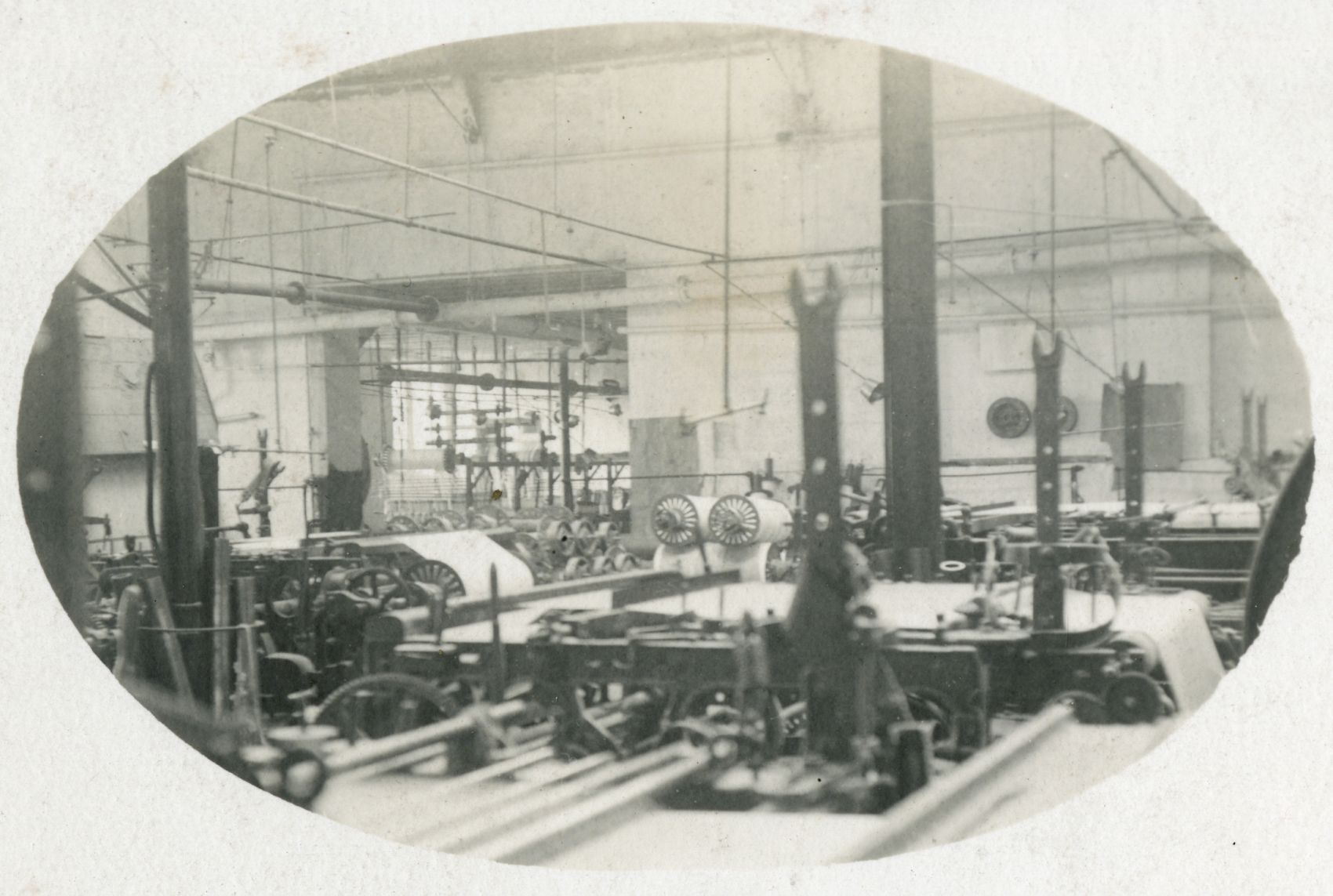 This is what happened at the Airdrie Cotton Works during its fire. A biography of provost Chapman recounts the harrowing story:

“There were two boys, who arrived early, engaged in the attic, six storey’s up, when the fire broke out and they were in an instant cut off from all communication with below. The flames rushed from flat to flat with terrible rapidity, burning through the roof and throwing a lurid glare over the landscape. But where were the boys all this time, no one knew. The little fellows, with an energy greater than their years, had managed to climb on the top of one of the machines, and so to gain the window where their appearance was greeted with a shout. But what was to be done? They were six storeys up, and a ladder of that height was not to be had. But the next best thing was done. The men made a soft pile on the ground, and cried up to them to leap. One of the little fellows, with a heroism to be admired, took the dreadful leap, swooping down like a bird, and arrived almost scathless among his friends. The other hung by the hands till exhausted, and fell. He was caught by those below, and, like his comrade, he was little the worse.” 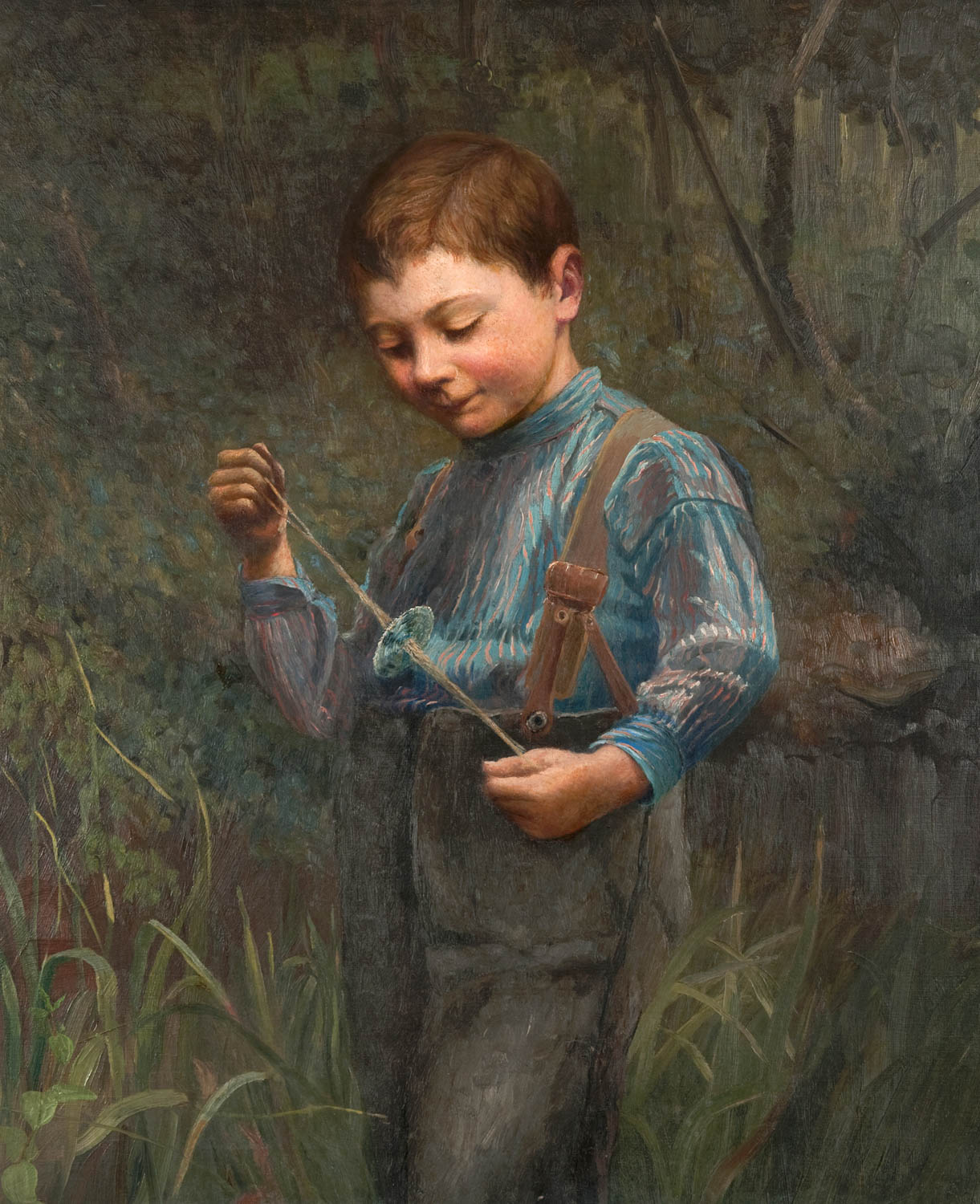 In other accounts, one of the boys sustained a broken leg from the fall, but even this injury was a narrow escape. Though the Factory Act (1833) made it illegal for children under the age of 9 to work, children were often employed in the textile industry. Their small bodies made them particularly good at repairing, cleaning, and operating spinning equipment. And, like women, they cost much less for factory owners to employ. 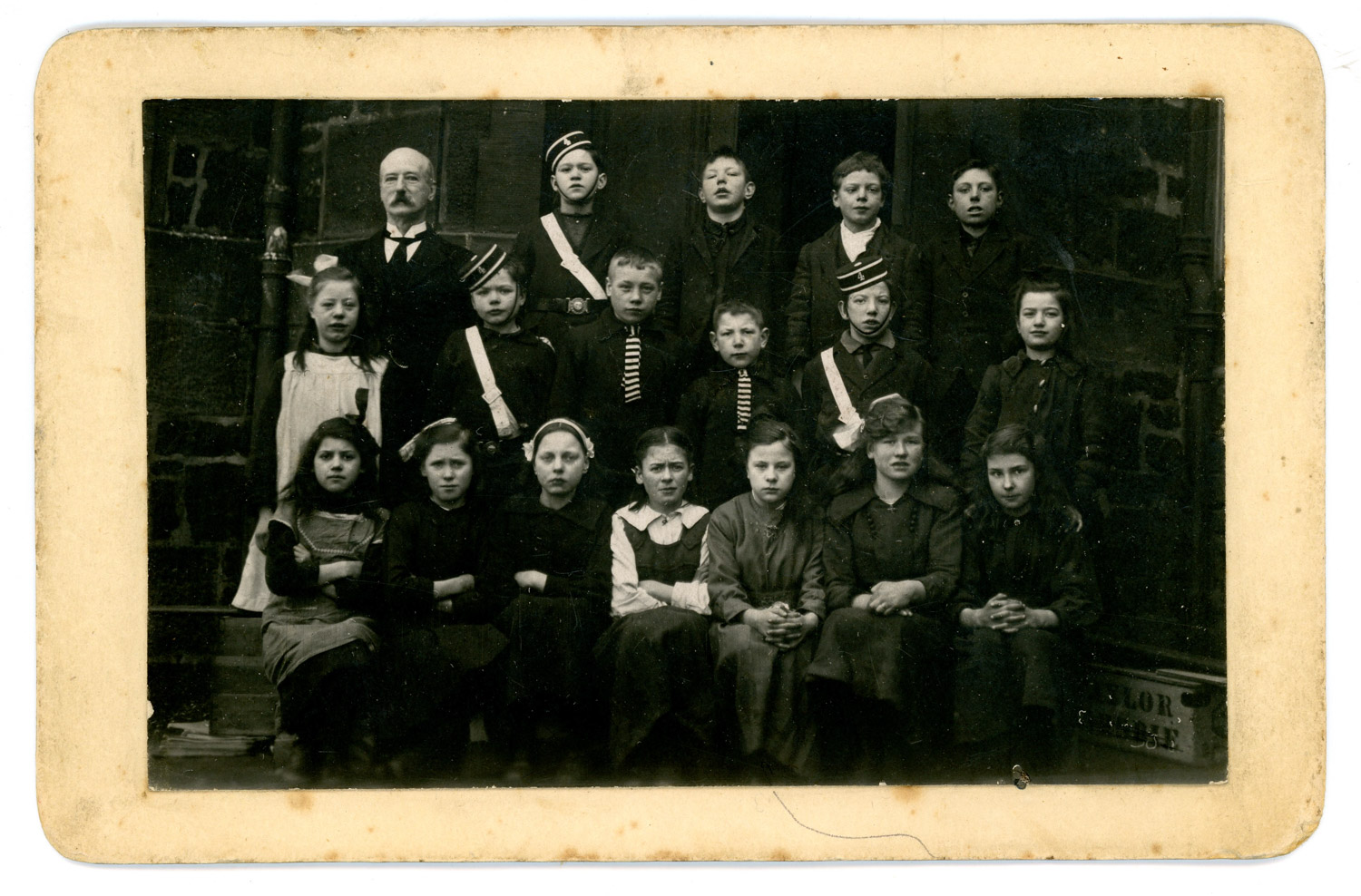 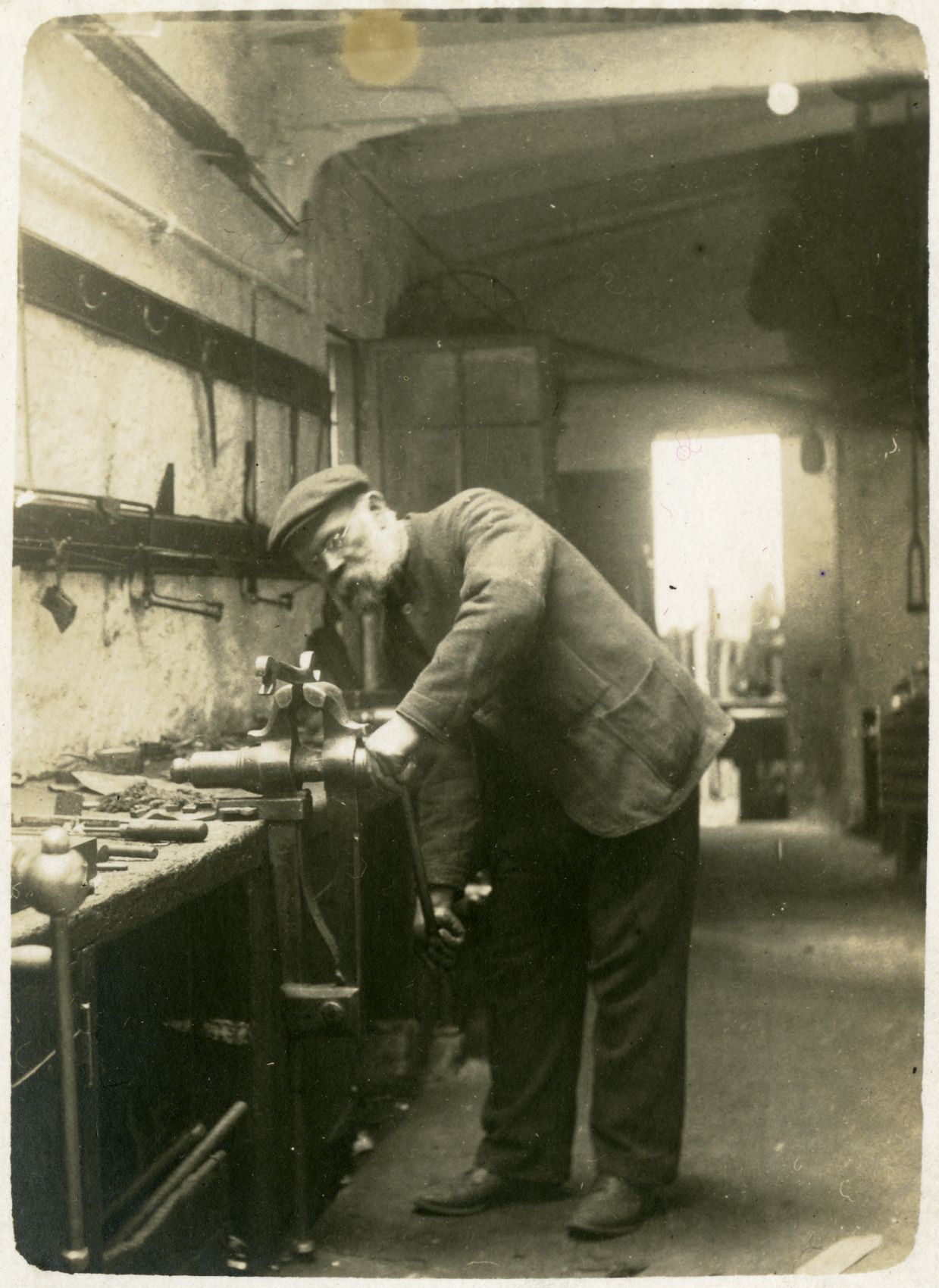 An employee at Airdrie Cotton Works, around 1910

The factory did not stay closed for long. Insurance covered the damaged equipment and the owners, Houldsworth and Co., bought new spinning machines. These were quickly installed in the weaving shop, which had remained undamaged by the fire, and production started up again. 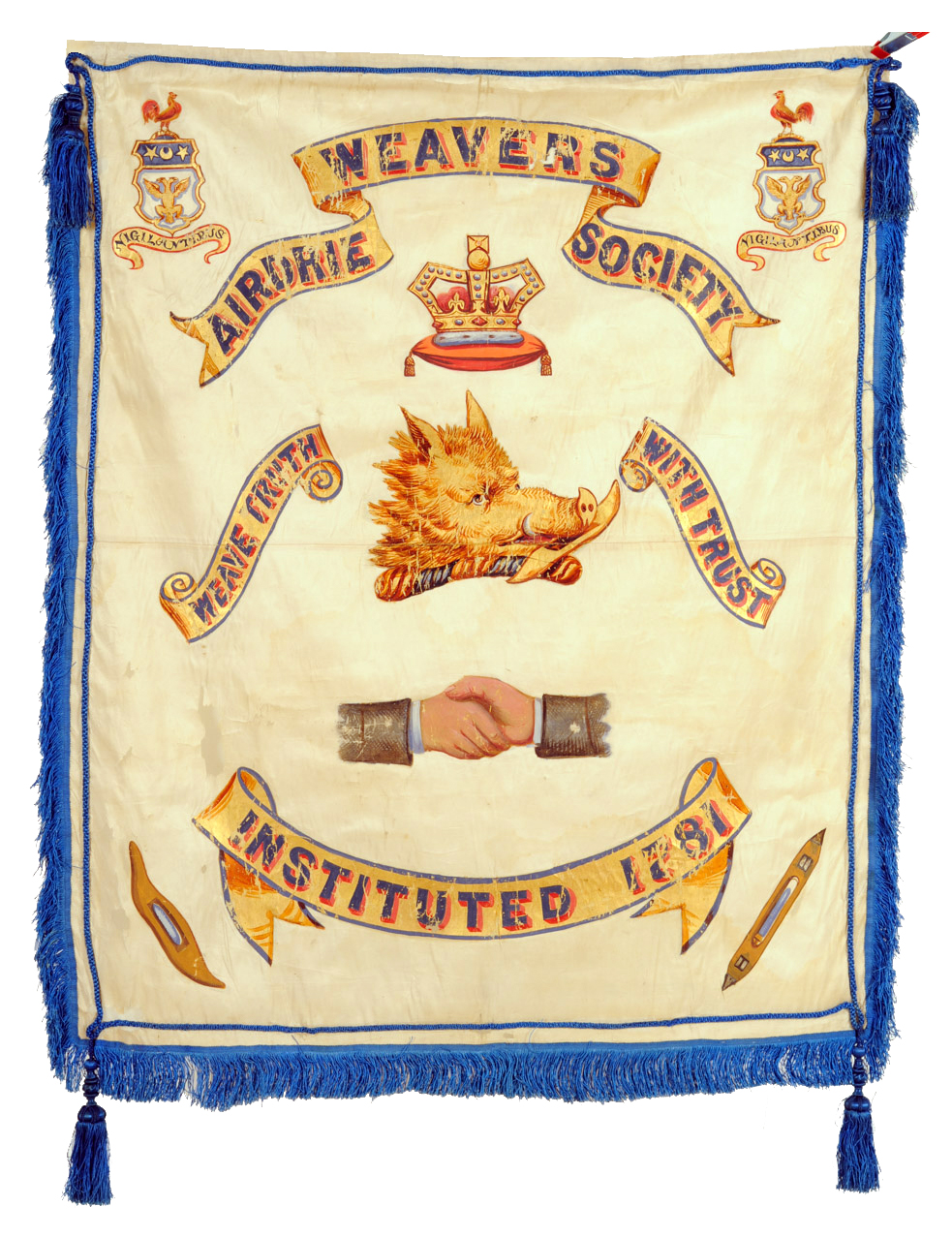 For the workers, Friendly Societies, such as the Airdrie Weaver’s Society, could have helped them in the meantime. These societies would have been able to advocate for more safety measures and assist with the medical bills for the boy injured in the fall.

Rise of the Welfare State

We do know that the Airdrie Cotton Works invested in at least one new safety measure after the fire: by 1858, they had a fire hose. Yet beyond that, the fire does not seem to have had very much impact.

In 1928, the Airdrie Cotton Works caught fire once again. This time, the Fire Brigade responded quickly in their motorized engine and were able to contain the fire. But though they were able to save much of the building, they were too late to save the works. The Airdrie Cotton Works, owned by Thomas Goldie and Co. closed in 1923 and the abandoned building was in liquidation when it caught fire.

In the end, it was not disaster that destroyed the Airdrie Cotton Works. It was time.