One of our most intriguing items from the early Middle Ages is the Cambusnethan Stone, which can be seen in the Exhibition Hall at Summerlee. It is the lower part of a carved sandstone cross, dating from the tenth century AD, and was unearthed at the site of Saint Michael’s church in Cambusnethan, east of Wishaw.

The carvings on the stone are still clearly visible, and thanks to this, it has been possible to date the cross based on the style of carving. But who carved crosses like this, and what story can such carvings tell us? 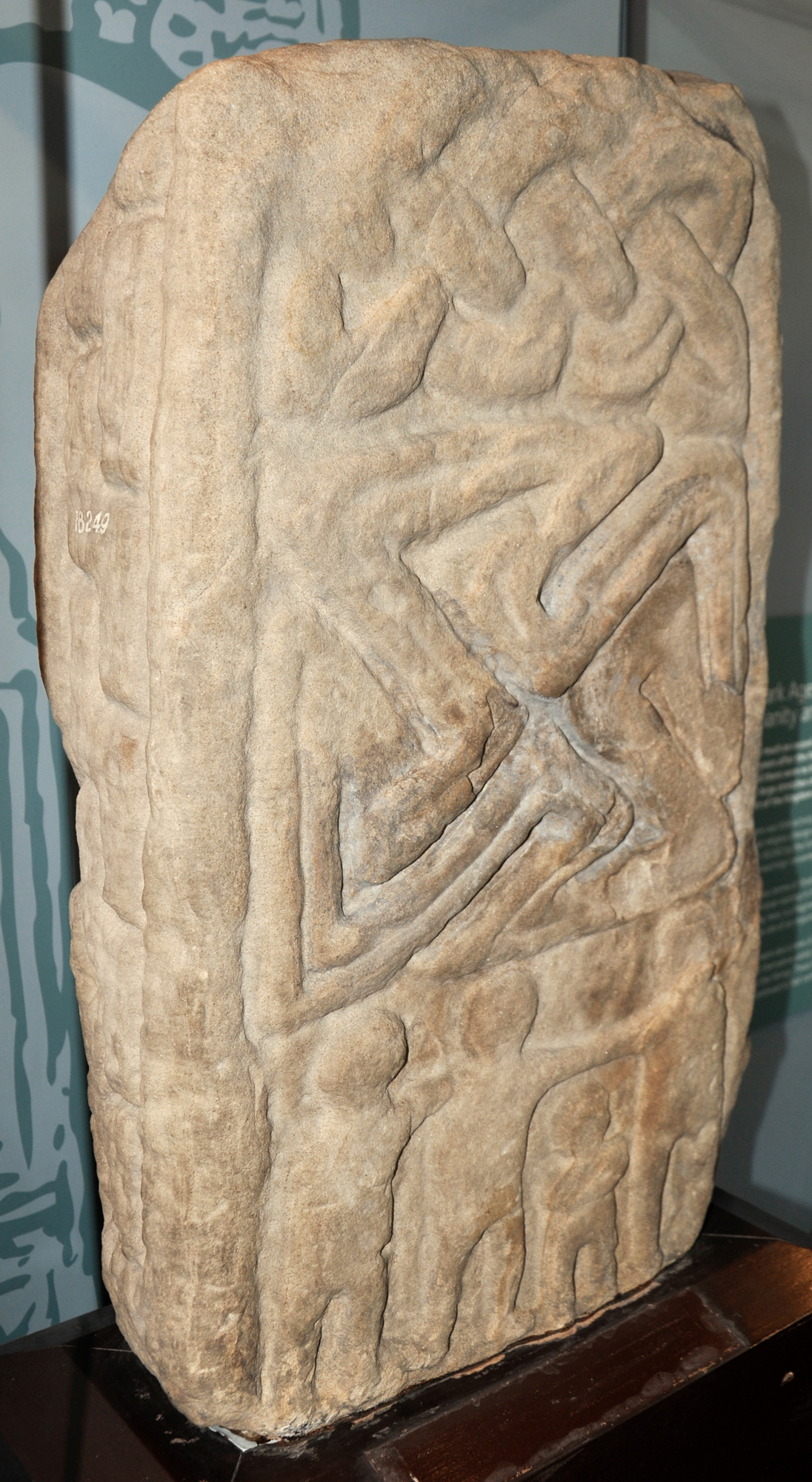 In the tenth century, the south west of Scotland was ruled by the kings of Strathclyde, also known as Cumbria (from ‘Cymry’). The people in this country spoke Cumbric, a Brittonic Celtic language closely related to Old Welsh. The name Cambusnethan comes from Cumbric, and means ‘Nethan’s bend’ (of the river), apparently after Saint Nethan, a Welsh missionary who accompanied Saint Ninian north, and likely founded this church.

The old churchyard is notably round, suggesting that it was modelled on the round churchyards in Wales. It is speculated to have been built on a pre-Christian religious site, but as yet there is no material evidence to support this.

The knotted interlace pattern at the top of the stone is quite typical of Celtic crosses of this time period, having its earliest precedents  in Roman art. Interlace designs in the British Isles were further refined under the influence of the Germanic art of the Anglo-Saxons, which introduced animal figures to the style. Interlace perhaps reached its highest development in Columban monastic art on the threshold of the Viking Age, such as the Book of Kells.

Interlace on a golden Anglo-Saxon belt buckle from the royal burial at Sutton Hoo, East Anglia. 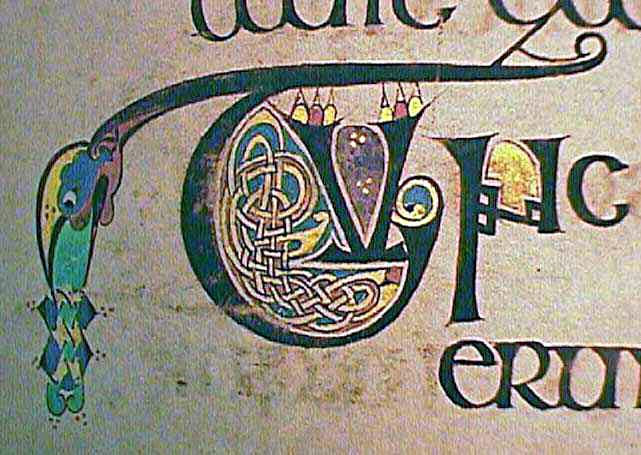 Miniature interlaced initials in the Book of Kells.

The specific type of interlace on this cross is what gives us its tenth century date, coinciding with the height of the Kingdom of Strathclyde, when the kingdom expanded far south of the Solway Firth, and was known as Cumbria.

Below the interlace pattern, we encounter a distinctive symbol – a swastika. Some viewers may be surprised to see such an ominously recognisable symbol on this tenth century piece of stonework. Swastikas, of course, are infinitely older than the Nazi Party, older even than the Indo-Europeans, the extraordinary prehistoric people behind the idea of the Aryan race. Ancient examples are found spread all over the world, the oldest rooted well in the Stone Age, with examples re-occurring all over the world.

Swastika decoration on a Scythian sheath.

But what does it mean, and what is it doing on a Christian cross? Like all symbols, the meaning of the swastika depends on the viewer’s perspective as much as the sign itself. For many modern viewers in the western world, the symbol has an evil reputation. In South Asia, on the other hand, the swastika is recognised as an icon of Surya, the Vedic sun god, who is still worshipped by Hindus today. Surya, like Norse Sol and Greek Helios, rides in a chariot, and the swastika evokes the spinning chariot wheel, the progress of the sun across the sky and the cycle of the seasons. Swastikas were also very widespread in the earlier Sintashta Culture, the first people to develop chariot warfare. 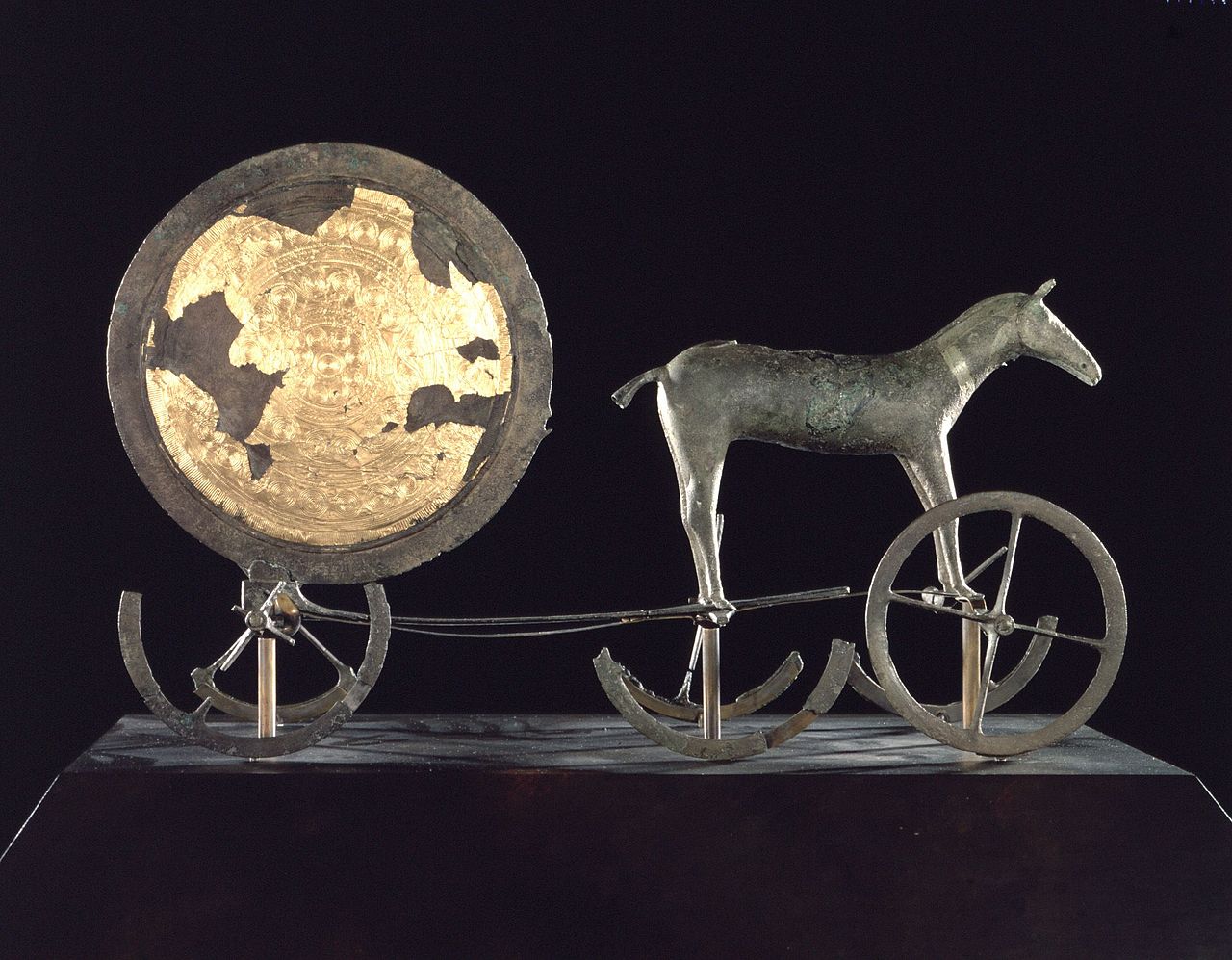 The Trundholm Sun Chariot, Denmark, an early example of the Sun Chariot icon from the Nordic Bronze Age.

The swastika is also found historically in Europe. For the ancient Romans, the shape was decorative, a popular motif in geometric designs. For the Vikings, on the other hand, the swastika is thought to have had a distinct religious meaning, not linked to the sun, but instead denoting two crossed thunderbolts, or a spinning hammer, the icons of Thor (or Thunor in Old English).

But what about Celtic peoples? Is there some lost meaning to justify its place alongside Biblical scenes in Strathclyde? The answer to this question is unknown. The symbol is attested in Celtic art, but these examples are relatively few, and usually only appear as part of more elaborate patterns. The three-armed triskelion, on the other hand, had a wider provenance. It may have links with triple-deities such as the three-faced Lugus in the ancient Celtic world, but came to represent the Holy Trinity in the Christian era, as did the shamrock. 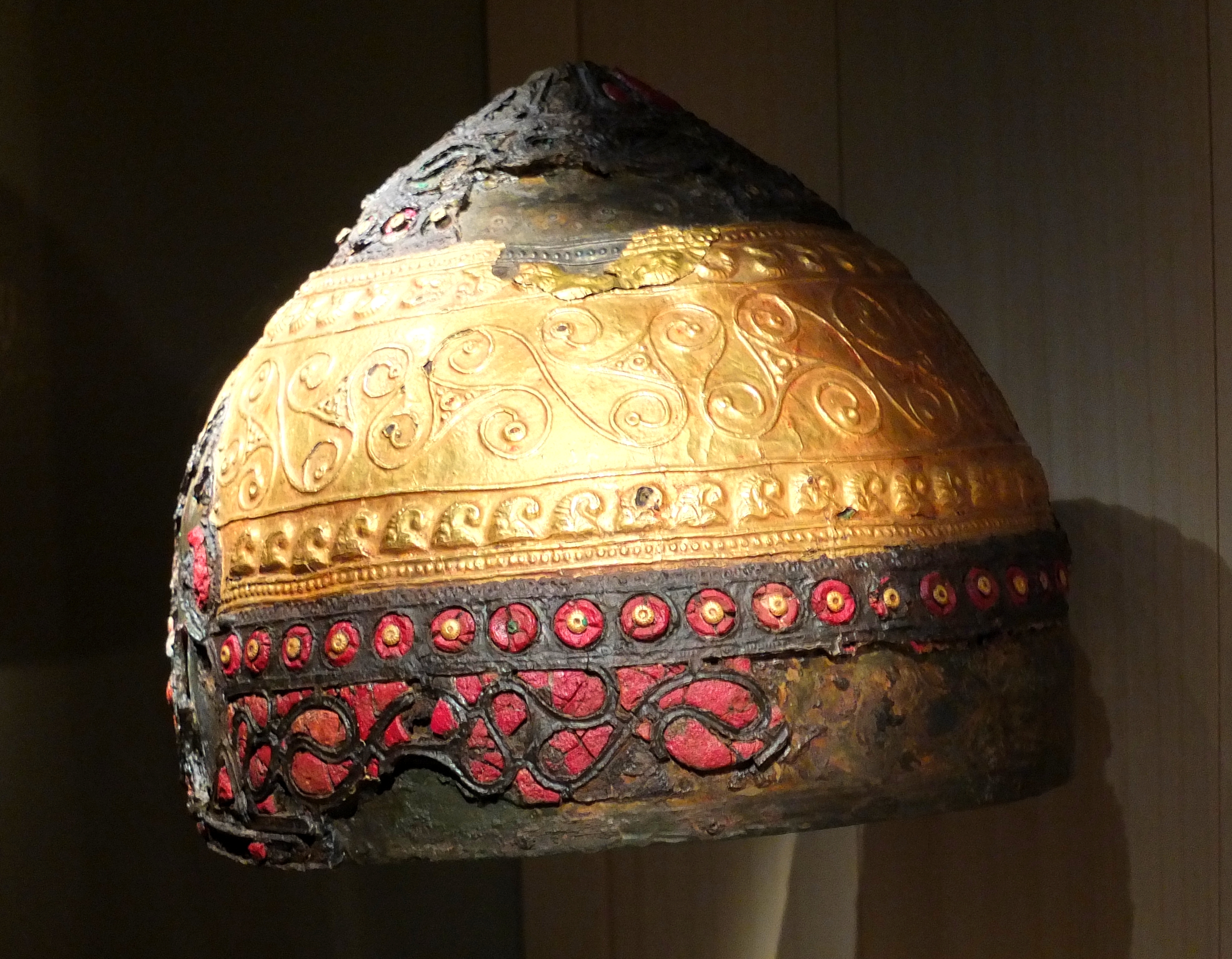 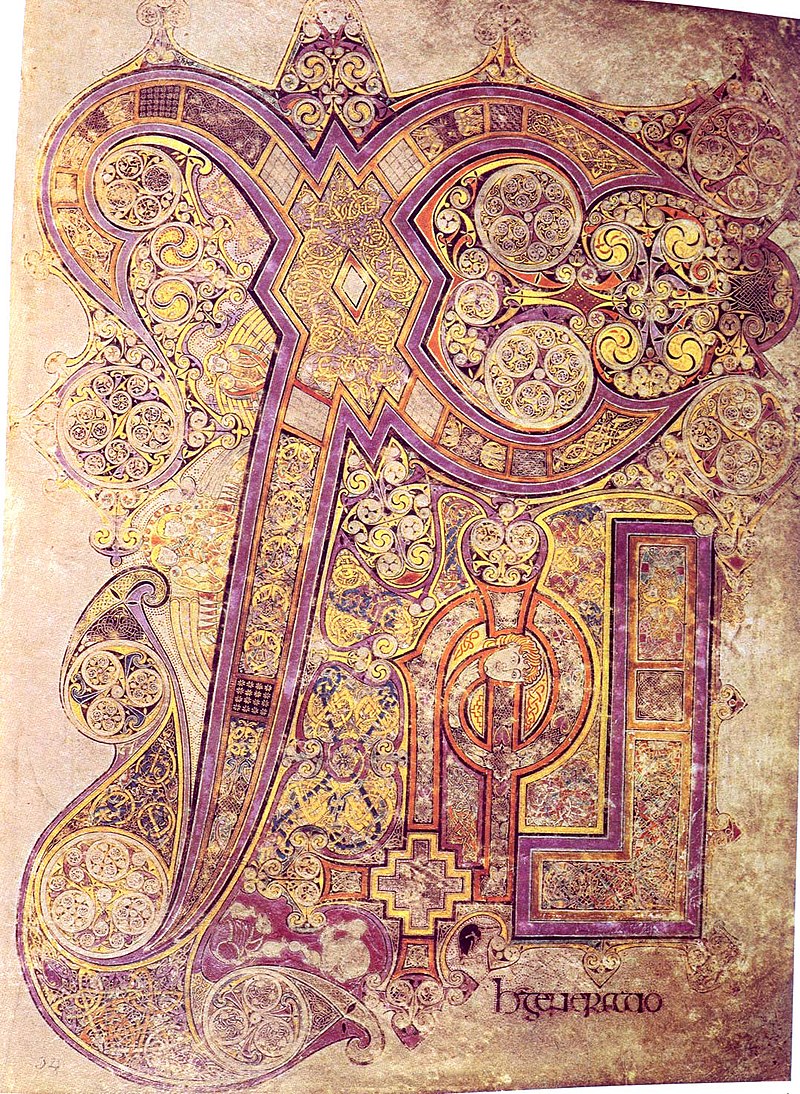 Triskelion motifs in the Book of Kells, more than a thousand years later.

The Cambusnethan swastika is not a complete outlier, though. The contemporary Sun Stone from the centre of worship at Govan displays a strikingly similar symbol, four serpents curling around a central boss, a motif from Gaelic art copied by the Strathclyde Britons. 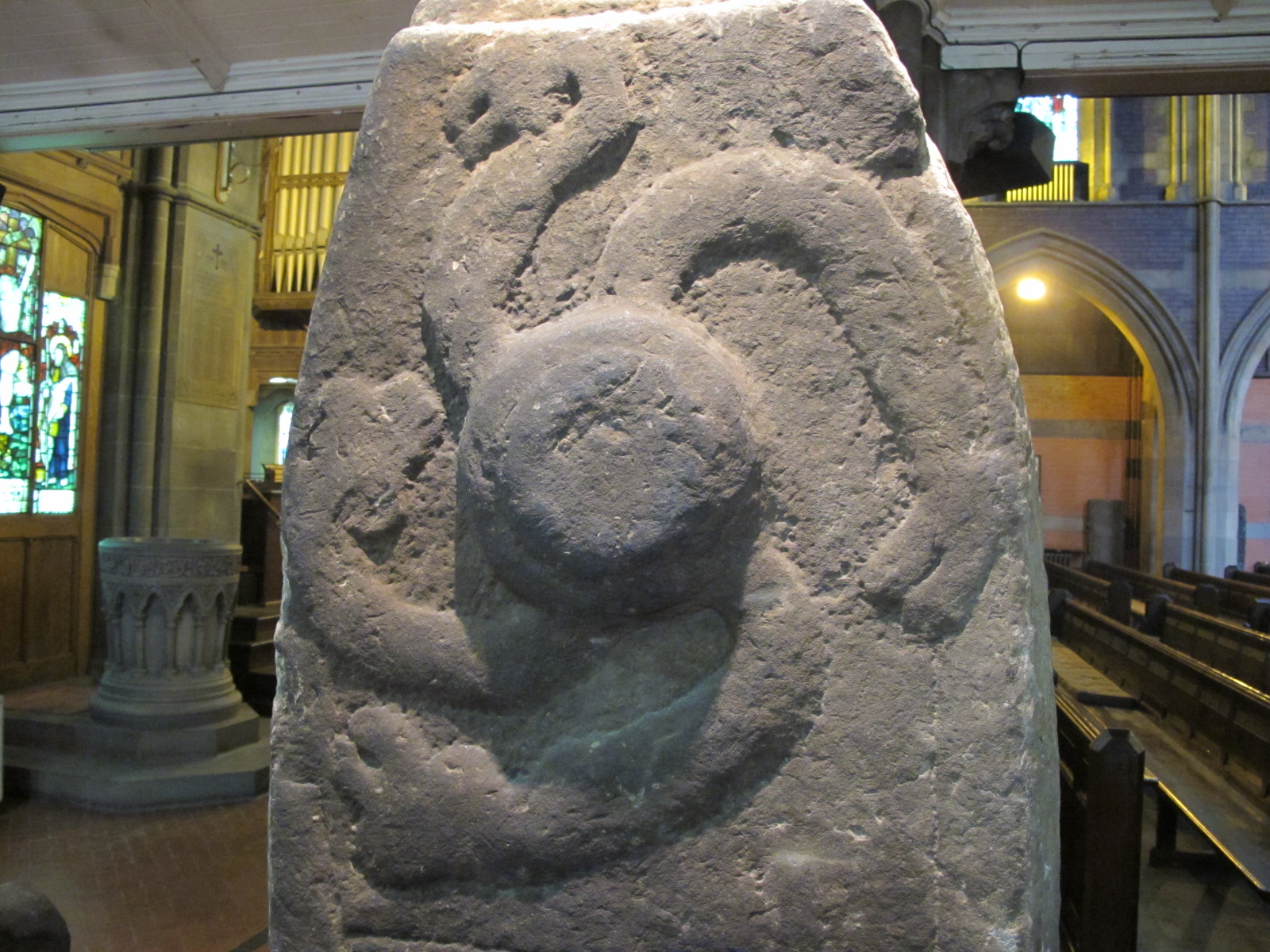 The Sun Stone on display with the Govan Stones collection. This photograph is credited to Barbara Keeling, 2010.

It is thought to represent a snake repeatedly shedding its skin, a visual metaphor for Christian redemption of evil. Symbols like these were in many ways the universal language of the Dark Ages, used to illustrate complex ideas to a largely illiterate population.

The Cambusnethan example differs considerably from the Sun Stone. It has no central boss, and the arms are much too angular to resemble snakes. However, it may very well be a stylised copy of the Sun Stone’s imagery, a bold new take on the Gaelic design.

Alternatively, it may have been copied from the heathen art of the Norwegian Vikings. The Vikings were perennial enemies of the Strathclyde Britons, but defections and fraternisation were common enough in such turbulent times. Some Norsemen were certainly allowed to settle in Strathclyde, giving rise to the famous hogback burials at Govan.

The scene at the bottom of the stone is less ambiguous. On the right, two human figures stand with their arms linked. A smaller figure passes under their arms, while a fourth figure on the left looks on.

This scene has been interpreted as the Baptism of Jesus by John the Baptist, one of the major milestones in Jesus’ life, described in the Gospels. Jesus is the small figure, and John officiates on the left. It should be noted that Jesus and John were roughly the same age at the time of this baptism, so Jesus’ small size is probably symbolic, emphasising his submission to the rite.

But who, then, are the other two figures? They may be angels, as angels are conventionally depicted in the scene. 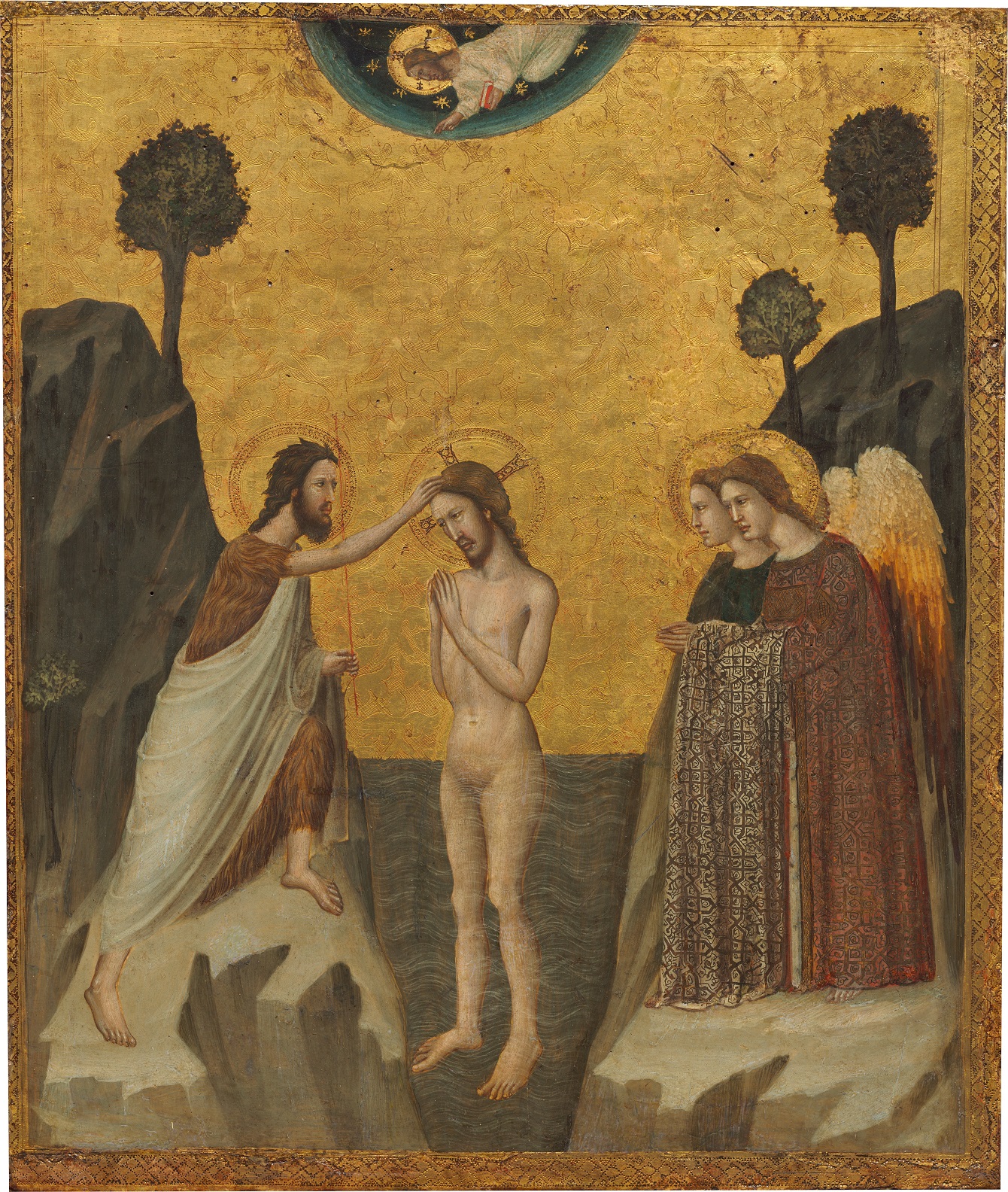 A 14th century Italian depiction of the scene.

However, the two figures on the stone have no wings, and in fact there is no mention of angels at this scene in the original Gospels. Compellingly, John is described as having two disciples, who afterwards followed Jesus. As such, the Baptism was a watershed moment for these two figures, and would serve as an exhortation to Christian viewers to follow their example. One of these disciples was none other than Saint Andrew.

We are grateful to the National Museum of Scotland for loaning us this remarkable object, and for supporting our publication of this article. Special thanks also to early medieval historian and author Tim Clarkson for providing us with a quality photograph of the Sun Stone. Tim’s blog on medieval Govan can be found here. The Sun Stone, the Viking hogbacks and many other ancient carvings can be seen at the Old Parish Church in Govan.