North Lanarkshire has been inhabited since the time of the very earliest human settlers of Britain. Our Archaeological collection includes a large variety of prehistoric tools found on the Drumpellier Estate, Coatbridge, which is now a country park. This evidence shows that the Drumpellier area became a haunt of hunter-gatherers in the Mesolithic period, and that a crannog was built there in the Iron Age. 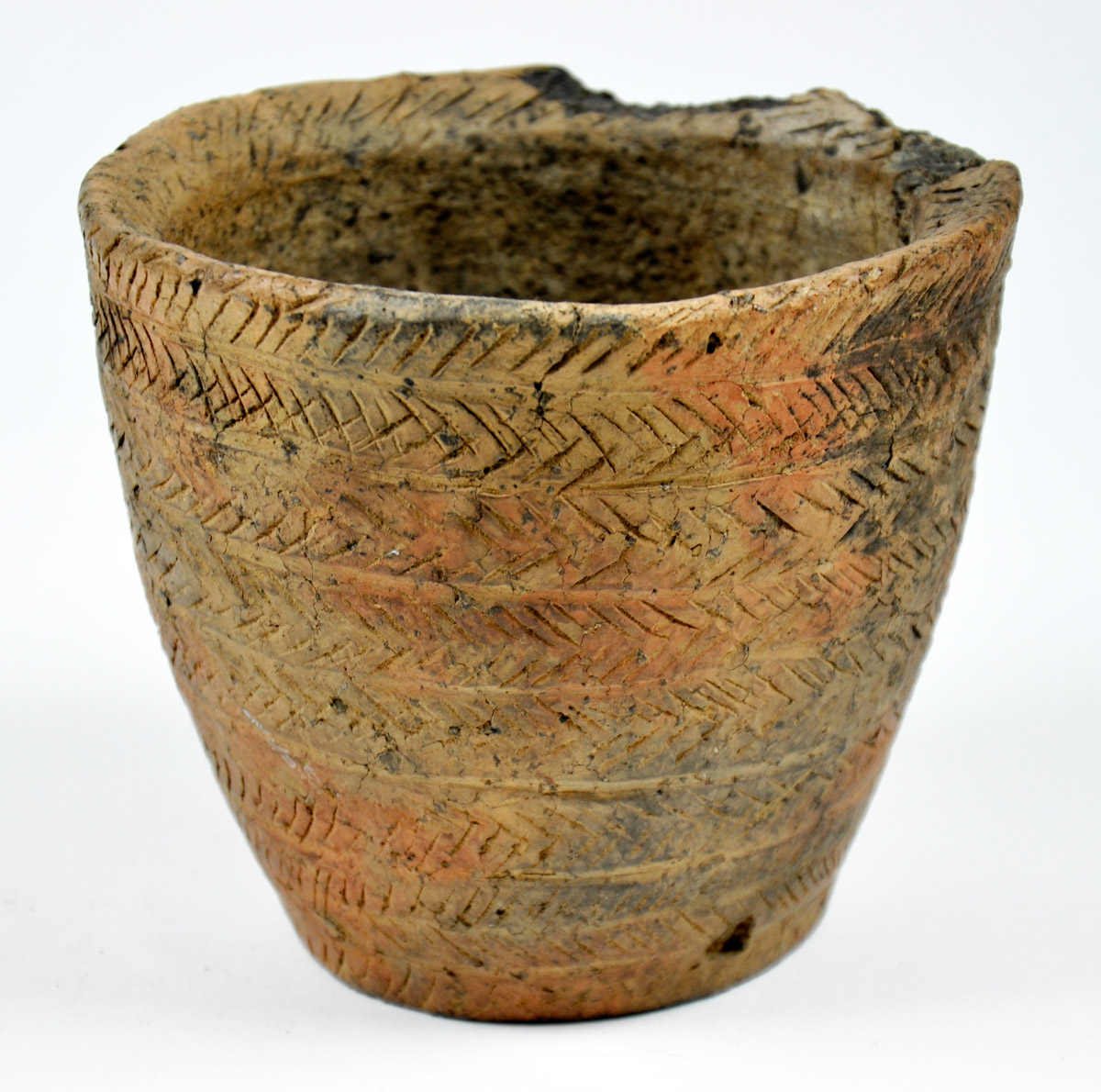 Perhaps the most compelling finds from Drumpellier are from the Bronze Age. These are the Drumpellier funeral urns, several decorated clay urns that were unearthed by pure accident in the spring of 1852. Local workers were digging for sand when they came upon a circle of rough stone coffins, each containing bones and an urn placed at the head of the coffin. The circle was mathematically arranged, with nine coffins placed at even intervals. There were also two ‘satellite’ burials outside the circle, and a number of charred human bones scattered in the centre, which apparently belonged to adult men. 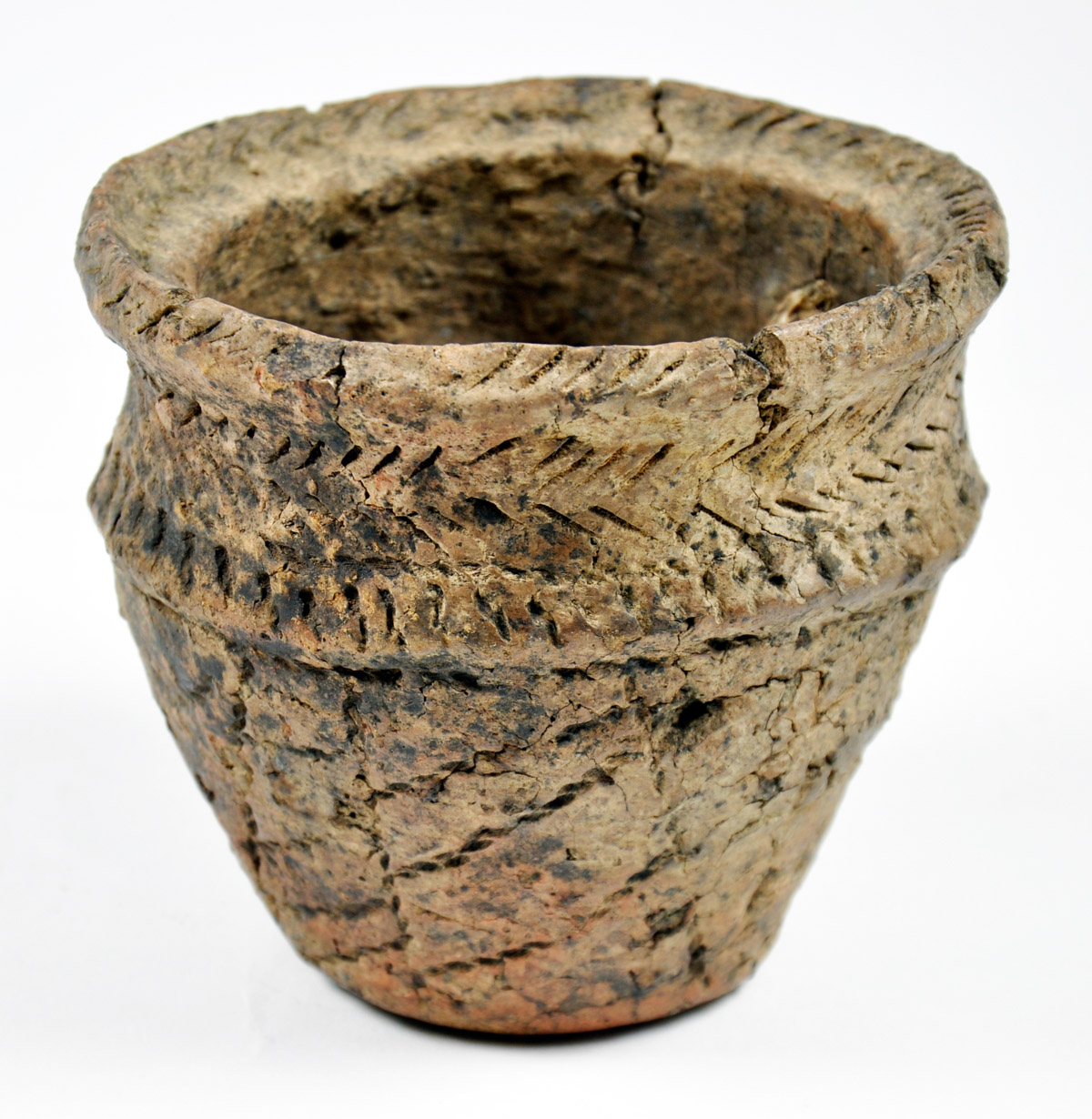 All of this evidence of ritual invites speculation. What is the significance of the circle? Is it a solar symbol, or something else? What about the charred bones? Could they be enemies of the buried men, put to death to appease the spirits of the dead? Were the dead closely related to one another? What about the satellite burials? And what about the stone hammer that was found in one of the coffins, and sadly lost? 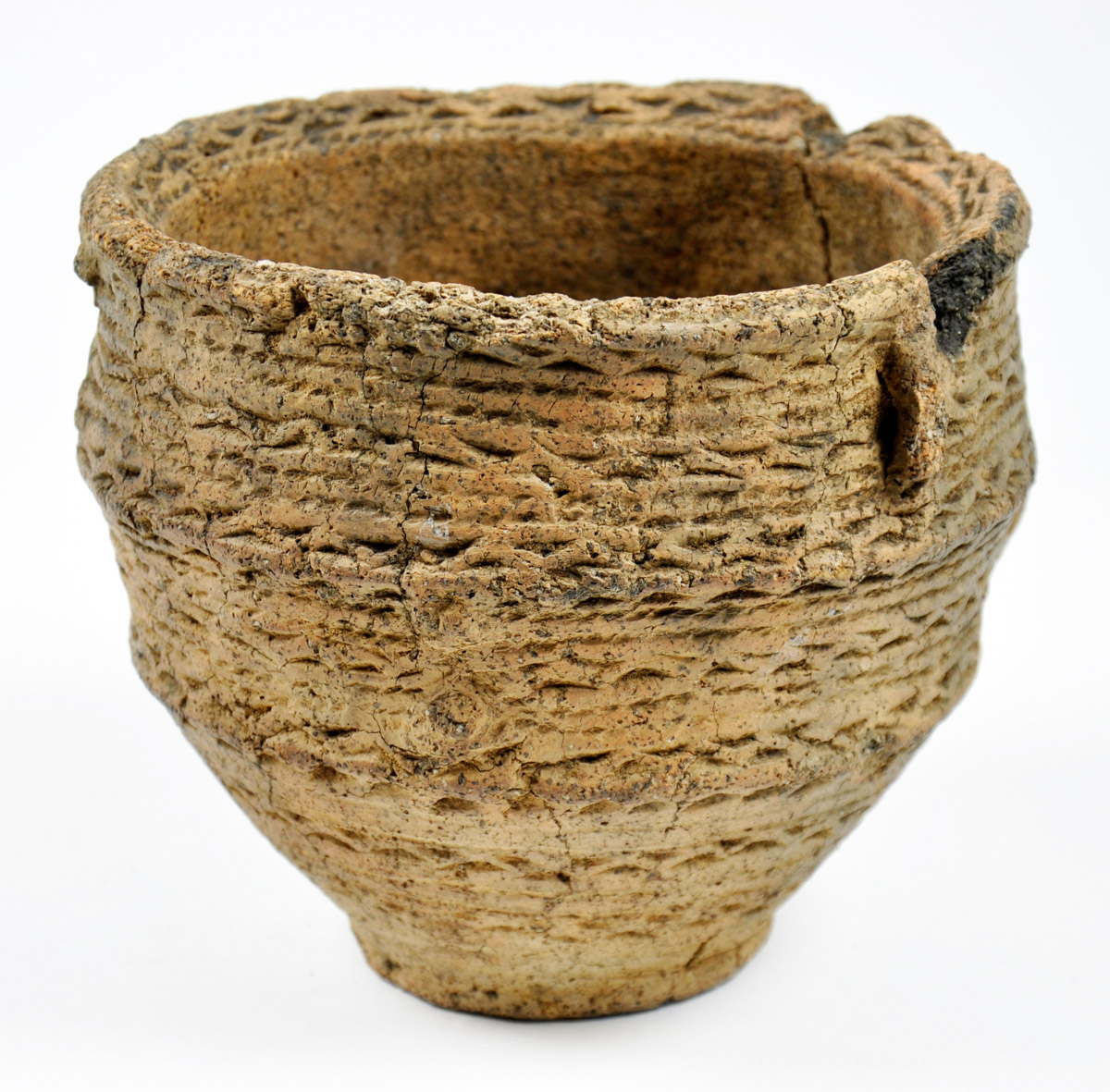 These questions, unfortunately, cannot be answered for certain. However, there are other questions that definitely can be. The urns (properly called food vessels) were given with offerings of food or drink to the dead, and with their distinctive ‘cist’ coffins belong to the later phase (c. 2200-2100 BC) of the Beaker Culture, which thrived in Western Europe during the Bronze Age. 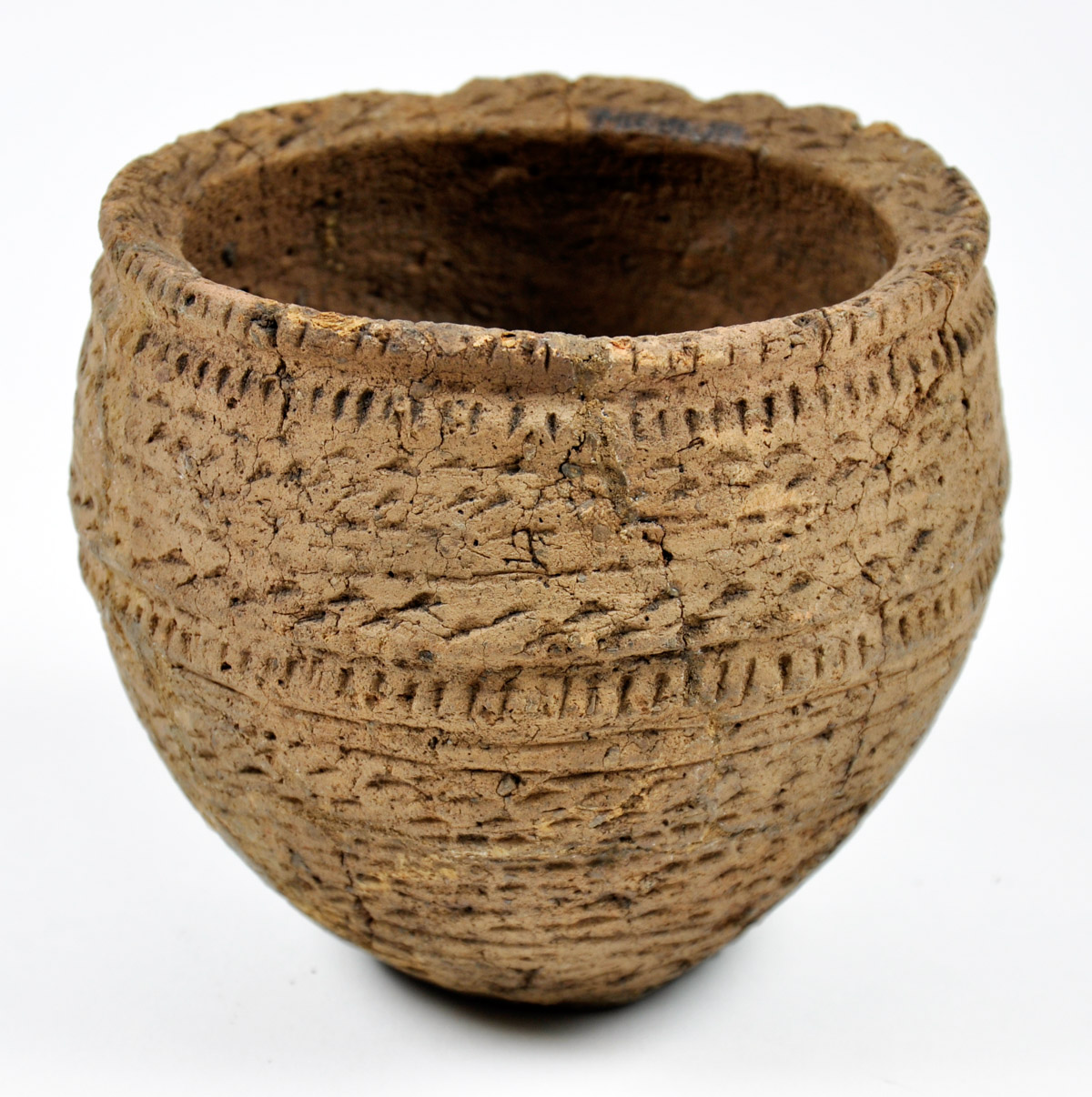 Arriving in the British Isles about 4500 years ago, the Bronze Age was a period of sudden and irreversible transformation. There were winners and losers in this upheaval. For the Neolithic farmers of Britain, the same enigmatic people who had built Stone Henge and Skara Brae, the coming of the Bronze Age would prove catastrophic. In a period of a few centuries, they were almost completely eclipsed by waves of invaders from the European continent, finally resulting in a near complete genetic replacement.

But who were these invaders, and why were they so successful? They were a people known as the Beaker or Bell Beaker People, because of the distinctive clay beakers that were placed in their graves. Studies of ancient DNA have shown that a large part of the Beaker People’s ancestry came from the Yamnaya (or Pit Grave) Culture in the steppes of modern Ukraine. These nomadic horse herding people left a great genetic legacy across much of Eurasia, peaking in north and central Europe. The Yamnaya are most likely identical with the Proto-Indo-Europeans, although it is impossible to be certain of their language. They are also credited with the rapid spread of metalworking that defined the Bronze Age.

In comparison to the Neolithic inhabitants of Britain, the part-Yamnaya Beaker people were physically bigger, with fairer hair and skin, and often blue eyes. They probably spoke an early Indo-European language, and they were part of a complex of cultures with distinctive burial customs, stretching from Iberia up through Central Europe and along the Atlantic coast.

As for the reasons behind their success in overthrowing the Neolithic people in Britain, this too is open to speculation. Perhaps the Neolithic people were weakened by crop failures or disease at the time of the Beaker influx, or perhaps they simply failed to take advantage of the new technology that the invaders brought with them.

This map shows the distribution of the Beaker Culture in Europe.

The Beaker phenomenon seems to have originated in the coastal regions of Iberia, and was diffused around the continent by trade and cultural exchange rather than migration, in contrast to the large migration waves that brought it to the British Isles, where the Beaker culture had its greatest longevity.

Legacy of the Beaker People

Although the Beaker culture gradually transformed and lost its distinctive characteristics, it nevertheless left a legacy in the British Isles that cannot be understated. The Beaker culture was formative genetically, probably more so than any later migration. They also brought metalworking, and probably Indo-European languages such as we still speak today. Rich jewellery and other grave goods suggest that the Beaker culture was stratified, with a warrior aristocracy presiding as the ruling elite. As they divided up the land, local sub-cultures began to emerge, forming states analogous to the tribal kingdoms of the Iron Age. The Beaker People changed the British Isles forever, and began to set the stage for our own earliest age of history.

The Airdrie Cotton Works Fire: Fire Safety in the 1800s