What exactly was life in North Lanarkshire like during the war?

While many of the signs of normal life continued –  shopping, meeting friends and going to the cinema or music hall – the war made itself felt on all areas. The experience of this would heavily influence how both ordinary people and the Government approached life at home during the Second World War.

Recruitment was very much a feature of the home front. Along with industrial production, society became geared toward providing the military with a constant stream of recruits. On the outbreak of war, men on the Army Reserve were recalled to active service and thousands of North Lanarkshire men answered Lord Kitchener’s appeal for volunteers. 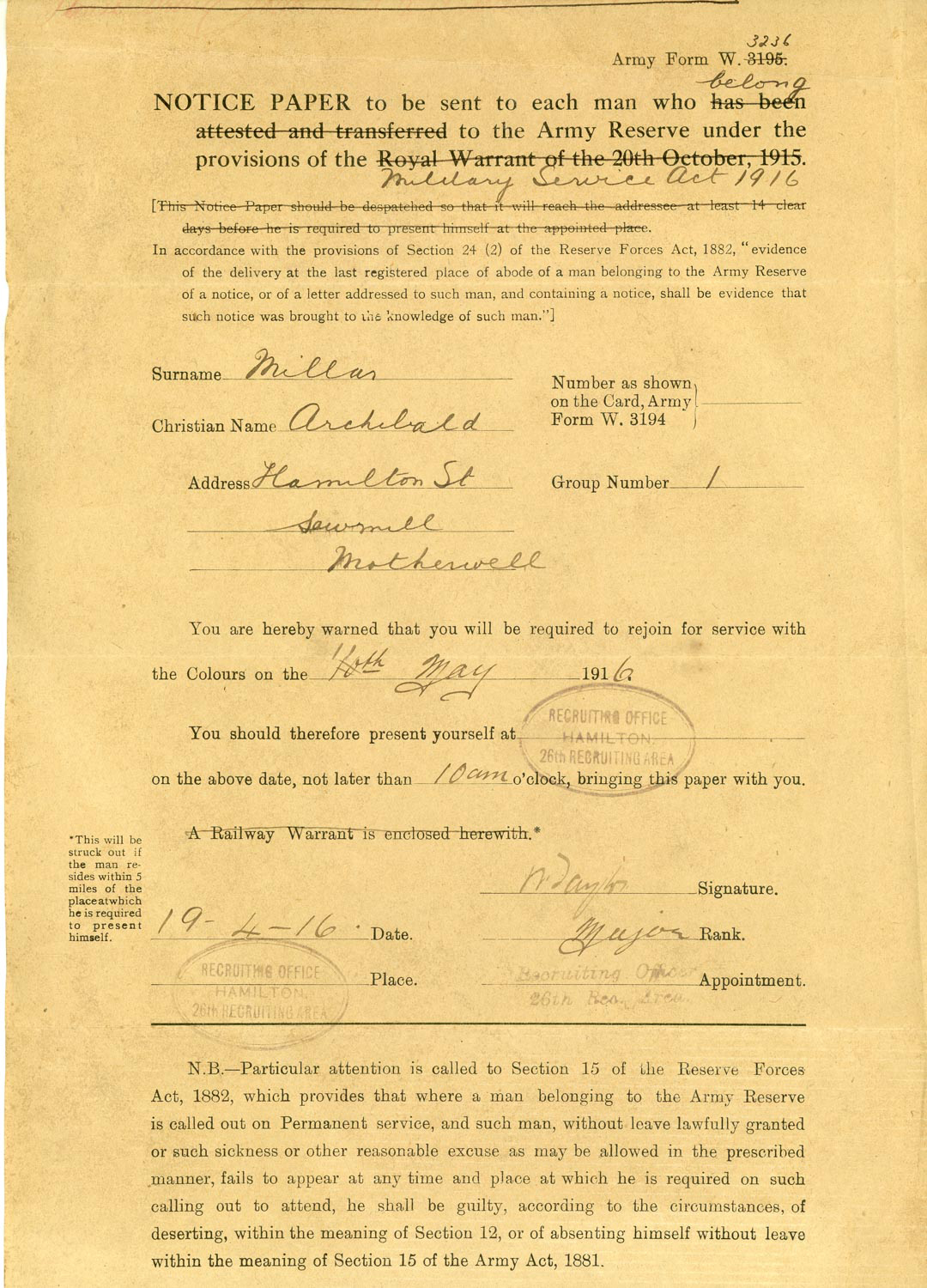 Lanarkshire had strong military ties prior to 1914. It was the recruiting area for The Cameronians, home to the Lanarkshire Yeomanry, and had territorial battalions of The Cameronians and HLI based here. The Argyll & Sutherland Highlanders recruited extensively in the areas of Kilsyth and Cumbernauld, with around 1 in 8 of their male population having volunteered by October 1914.

Whilst many North Lanarkshire men served in local regiments, they could be found in almost every regiment in the British Army, Royal Navy and Royal Flying Corps (later the Royal Air Force), particularly after the introduction of conscription in February 1916.

Pre-war Britain was a militaristic society, and the ideas of Empire were very strong. Huge social pressure was placed on men to enlist, with schemes such as a the ‘white feather’ campaign intended to shame men into signing up. Many workplaces in key industrial sectors began issuing badges to male employees to prevent negative attention from people in the street. 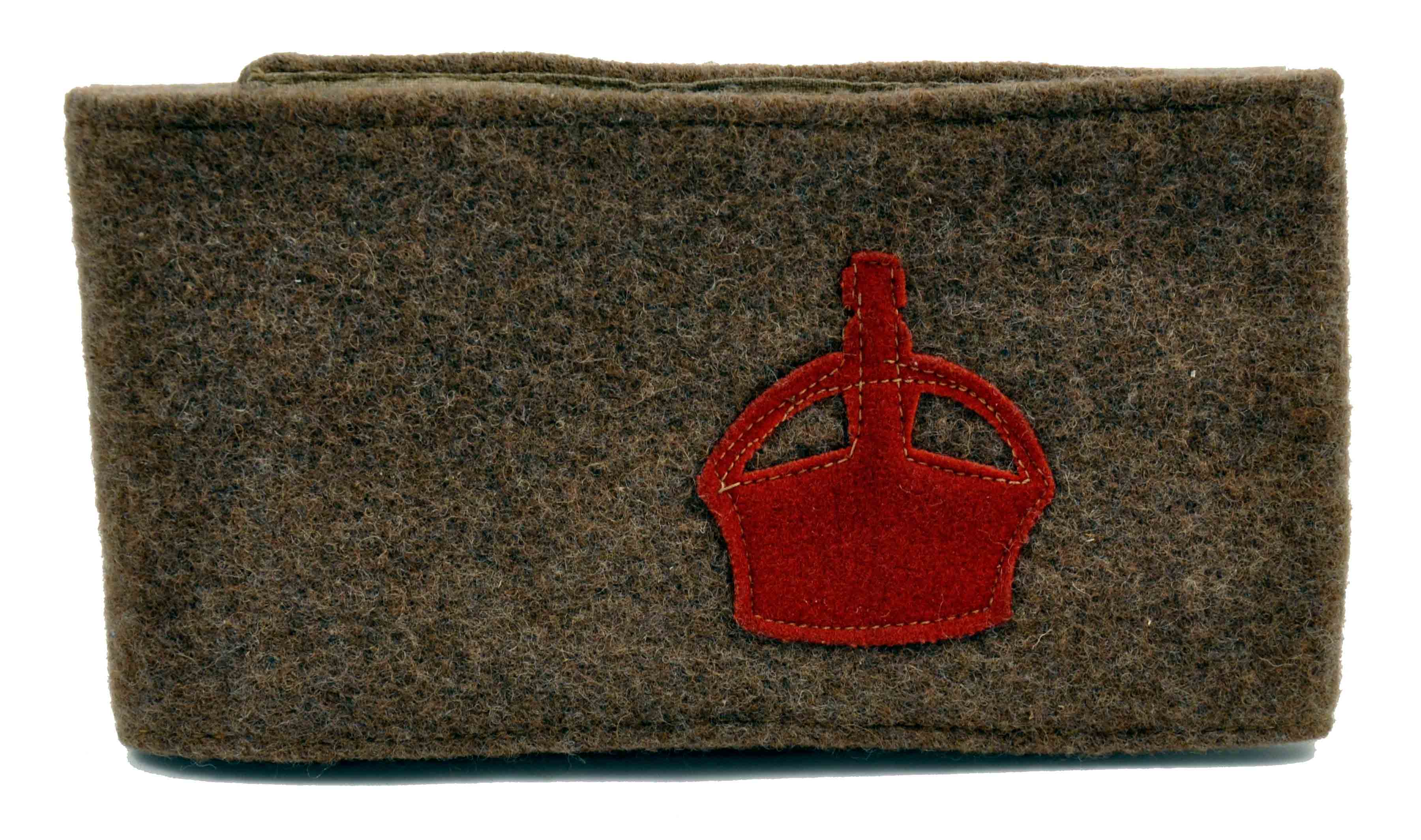 Other men in the army remained stationed at home during the war, attending reserve duties such as guarding sites of munitions production and home defence. Film footage from 1917 shows one such group, the ‘1st Lanarkshire Volunteer Battalion’, marching through Coatbridge. By that time in the war – which was after the introduction of conscription – this would likely have been a public morale boosting exercise. 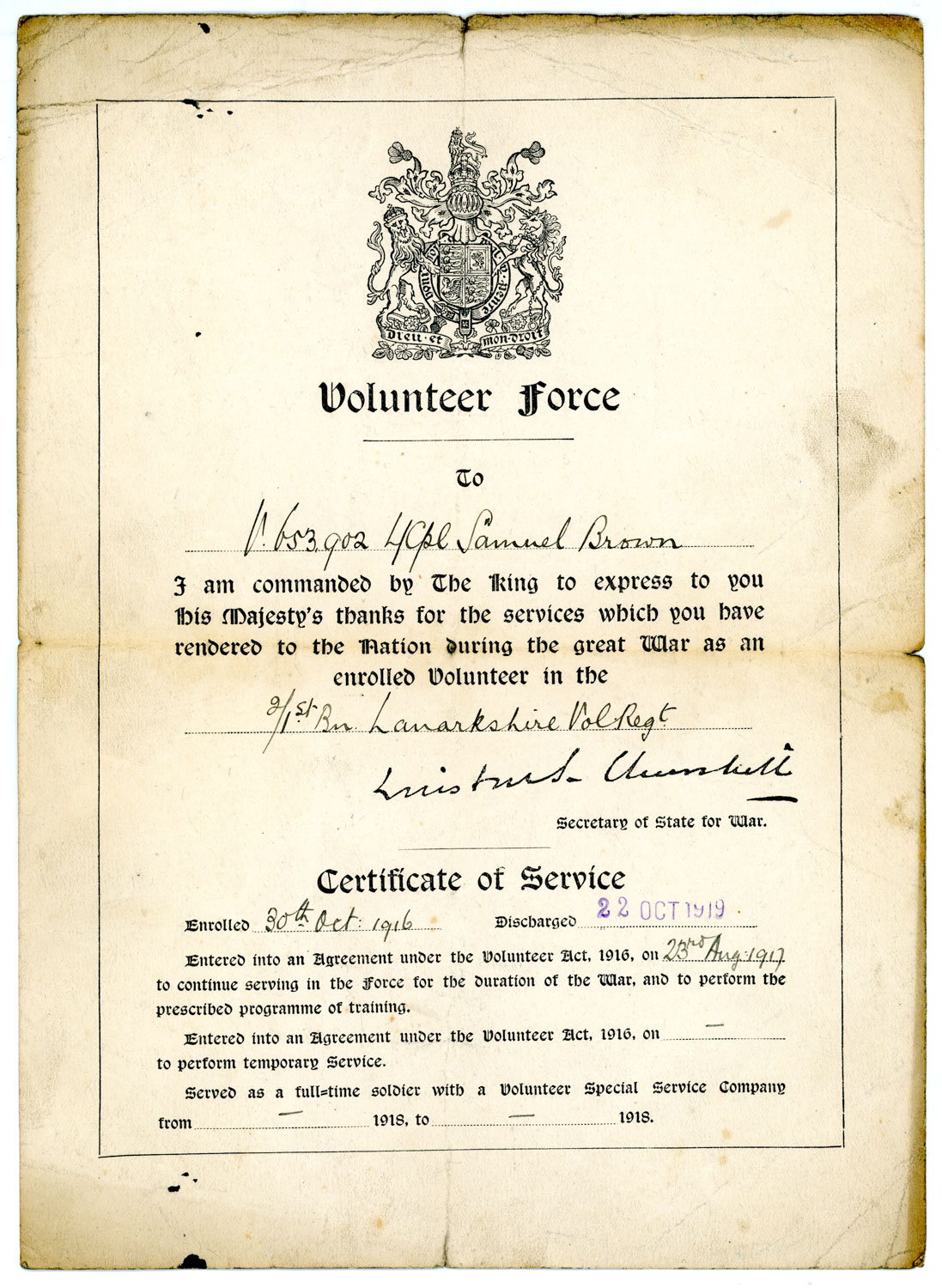 The outbreak of war also had an immediate effect on the cost and availability of certain foods. The price of a loaf of bread doubled from August 1914 to August 1917, when food prices became regulated. Rationing was introduced by the end of the war. 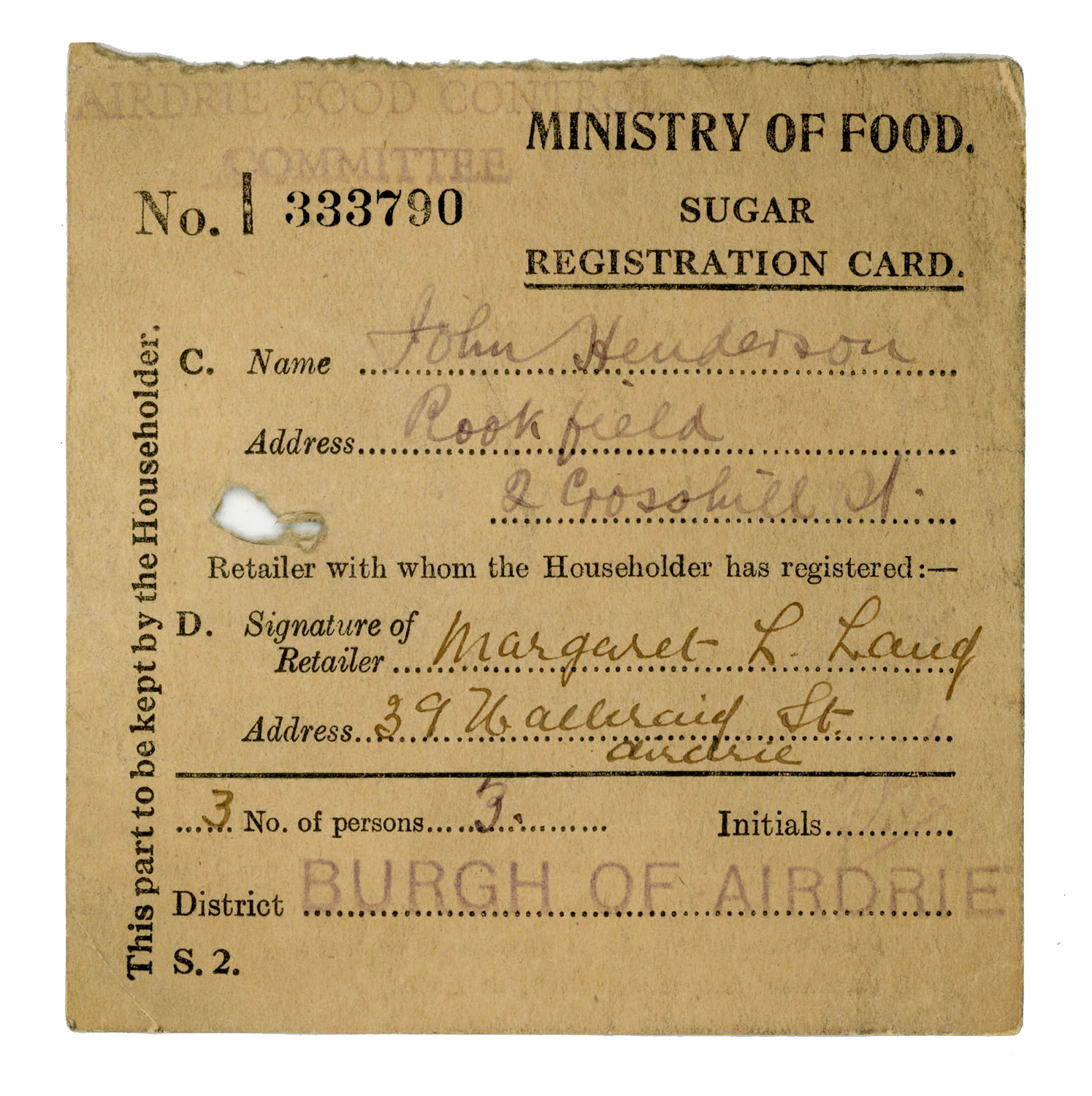 Business carried on as best it could. For many, work life continued; many industries were turned over to war work and ‘luxury’ items became scarce. With increasing numbers of men going into military service, women took their place on the high street, and in factories, workshops, and farms.

Fundraisers were held for various wartime causes such as raising money for the Red Cross or for Belgian refugees. 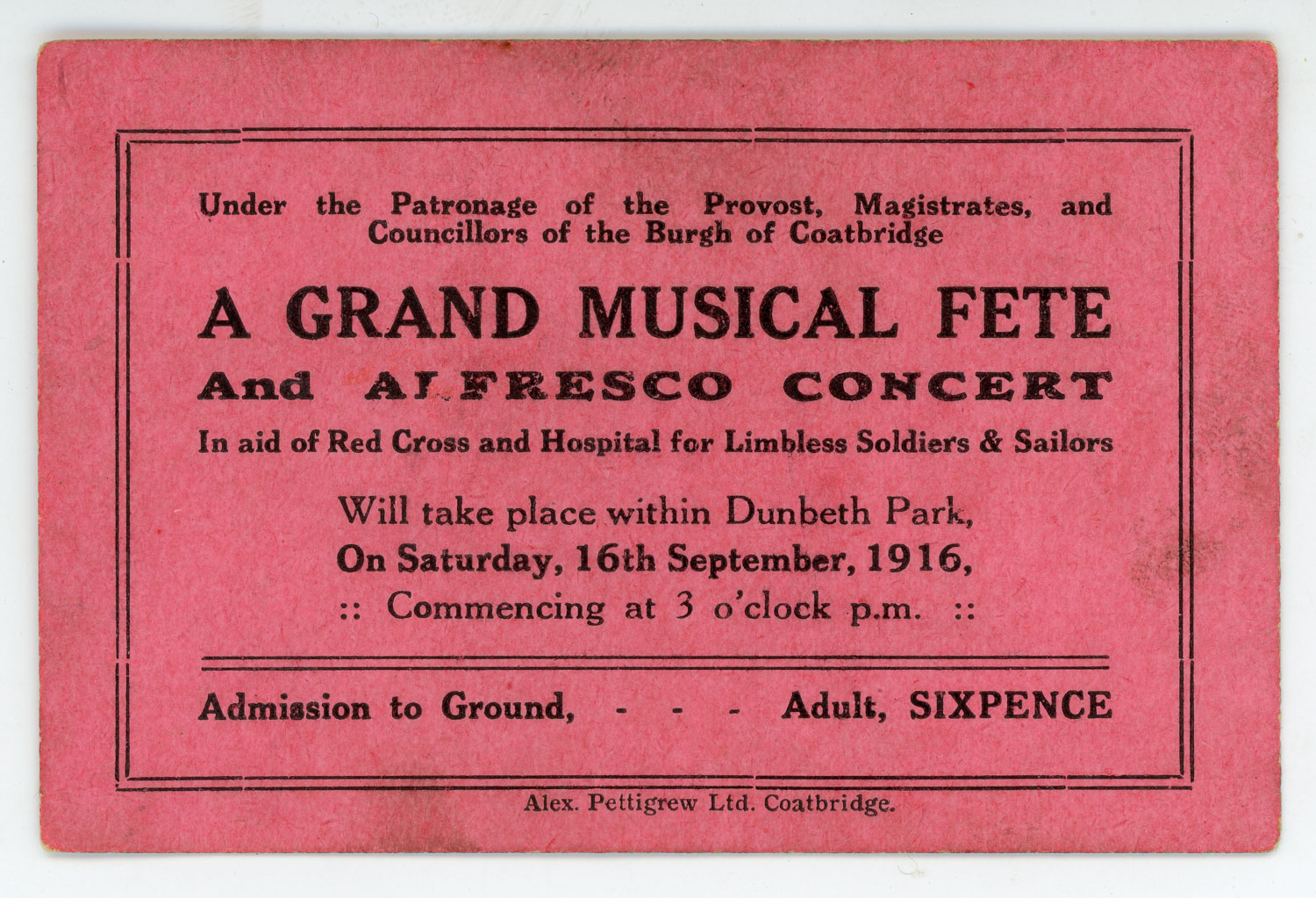 Even school children were mobilised. They raised money for the war effort, donating eggs to wounded soldiers or collecting sphagnum moss for wound dressings for use by the Red Cross. The bogland around the mining villages to the east of Airdrie was fertile ground, with 2nd Airdrie Scouts being one group that gathered moss there for the war effort.

As much as life had to carry on, it is hard to imagine what it must have been like for families faced with such changed circumstances, and to have been separated from loved ones in the armed forces.