Millions of people worldwide today wear glasses to improve their vision but how much do you know about the development of visual aids? Read on for a brief history.

There is written evidence that aids for visual impairment were used by scholars in ancient Greece and Rome. The earliest known reading devices were glass globes filled with water to create a magnifying effect and simple convex lenses, commonly made from rock crystal. The latter were called ‘burning glasses’ as they could also be used to start fires. Viking Age ground rock crystal ‘lenses’ have been identified in Sweden but it is possible that these were simply used for decorative purposes.

It is clear from the publication of The Treasure of the Optics by mathematician and astronomer Abu Ali al-Hassan Ibn al-Haitham, or Alhazen (965-1039) that the basics of geometrical optics were known in the Arabian Peninsula by the eleventh century. There is no evidence that Alhazen used this knowledge to create any reading devices himself but his text was translated into Latin and shared widely throughout Christian monasteries.

By the late thirteenth century, reading stones were certainly in use. These were simple plano-convex lenses, made by cutting a solid white glass sphere in half and grinding them into shape with quartz or beryl. It is thought they were made by monks in Northern Italy, as Venice was the only place in Europe where white glass was produced. Reading stones are regarded as the precursor to eyeglasses, marking the beginning of the optical industry. 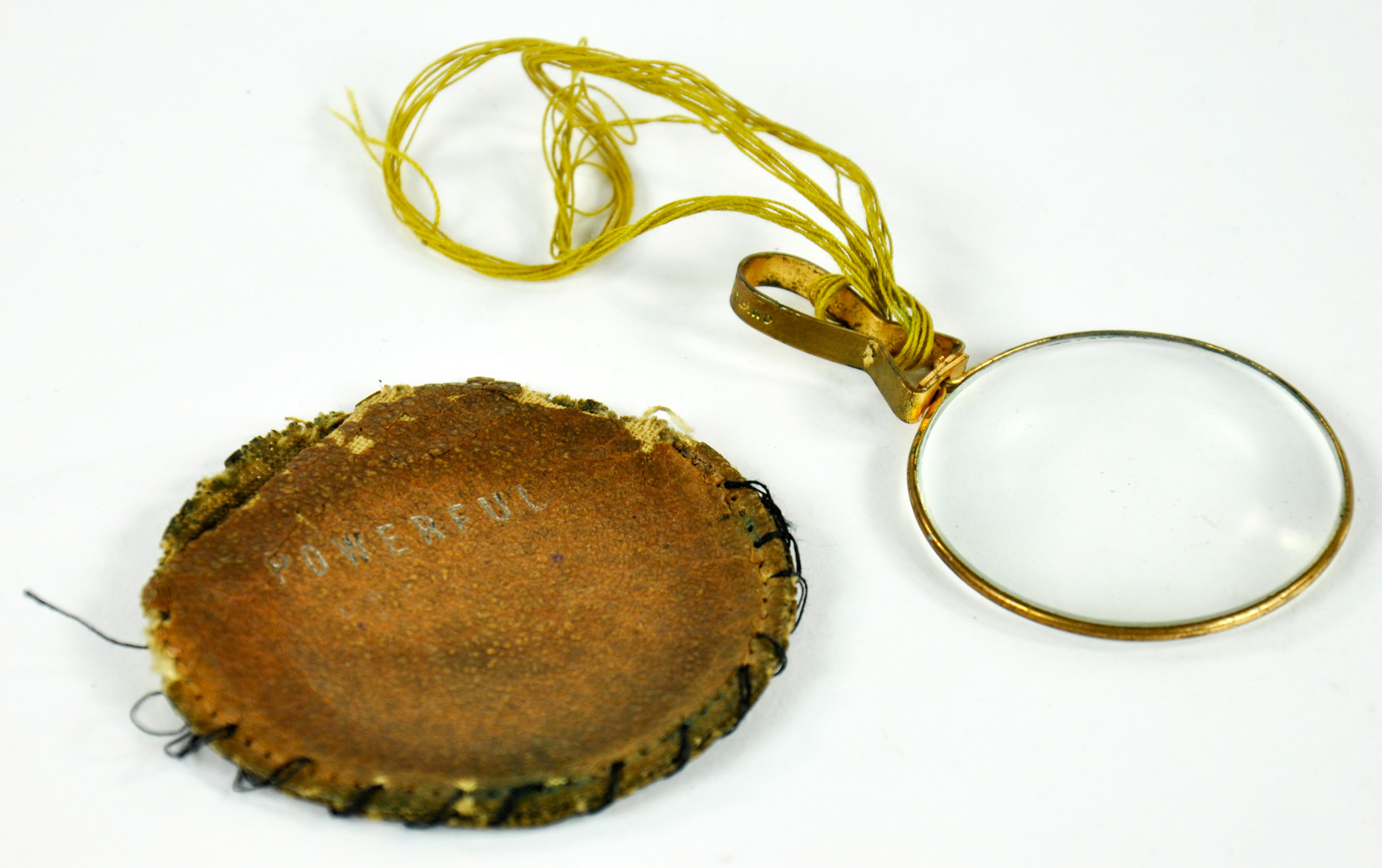 The earliest form of framed eyeglasses were known as ‘rivet spectacles’. They consisted of two magnifying glasses riveted together by the handles, thus creating a grip for the nose.

Little is known about how reading devices developed over the next few hundred years but the concept of concave and convex lenses was understood by the seventeenth century. A concave lens could be used to correct myopia (near-sightedness) while the convex lens corrected hyperopia (far-sightedness).

Bifocal lenses are usually attributed to Benjamin Franklin in 1784, although some historians believe they were invented up to 50 years earlier. Bifocal eyeglasses were a good solution for people with presbyopia (progressive difficulty in focusing on close objects or text) in conjunction with myopia, hyperopia and astigmatism. On the downside, many bifocal wearers experience headaches and dizziness, while early bifocals came with the added hazard of fragility.

Originally, bifocals were constructed using two lenses of distinct optical powers, with the most convex lenses mounted within the bottom rim of the frame and the least convex above. It wasn’t until the end of the nineteenth century that a method was developed for fusing the separate lens parts together.

Pince-nez, Coatbridge, around 1900s; from the CultureNL museum collections

The nineteenth century brought other new developments. Cylindrical lenses to address astigmatism (blurred or distorted vision at all distances) are said to have been invented by Sir George Airy in 1825, while the invention of the spring clip led to a new form of eyewear. Known as pince-nez (French for ‘pinching the nose’), the spring clip enabled the glasses to stay in place under their own tension. In the 1920s, pince-nez were often worn with nose-grip liners (rubber pads) to lessen the discomfort of the spring.

Spectacles became a fashion item during the early twentieth century, after pince-nez had peaked in popularity. The mid-twentieth century examples below were issued by W. Moore F.B.O.A., an ophthalmologist optician with premises in Kilsyth and Glasgow.

Spectacles, Kilsyth, around 1950-60s; from the CultureNL museum collections

The first successful contact lens was created by a German ophthalmologist in 1887, after almost 400 years of experimentation. The earliest types of lens were made of glass and covered the whole surface of the eye, so although this was a breakthrough they can’t be considered very user friendly! As plastic technology developed during the twentieth century, lenses gradually became smaller and lighter. 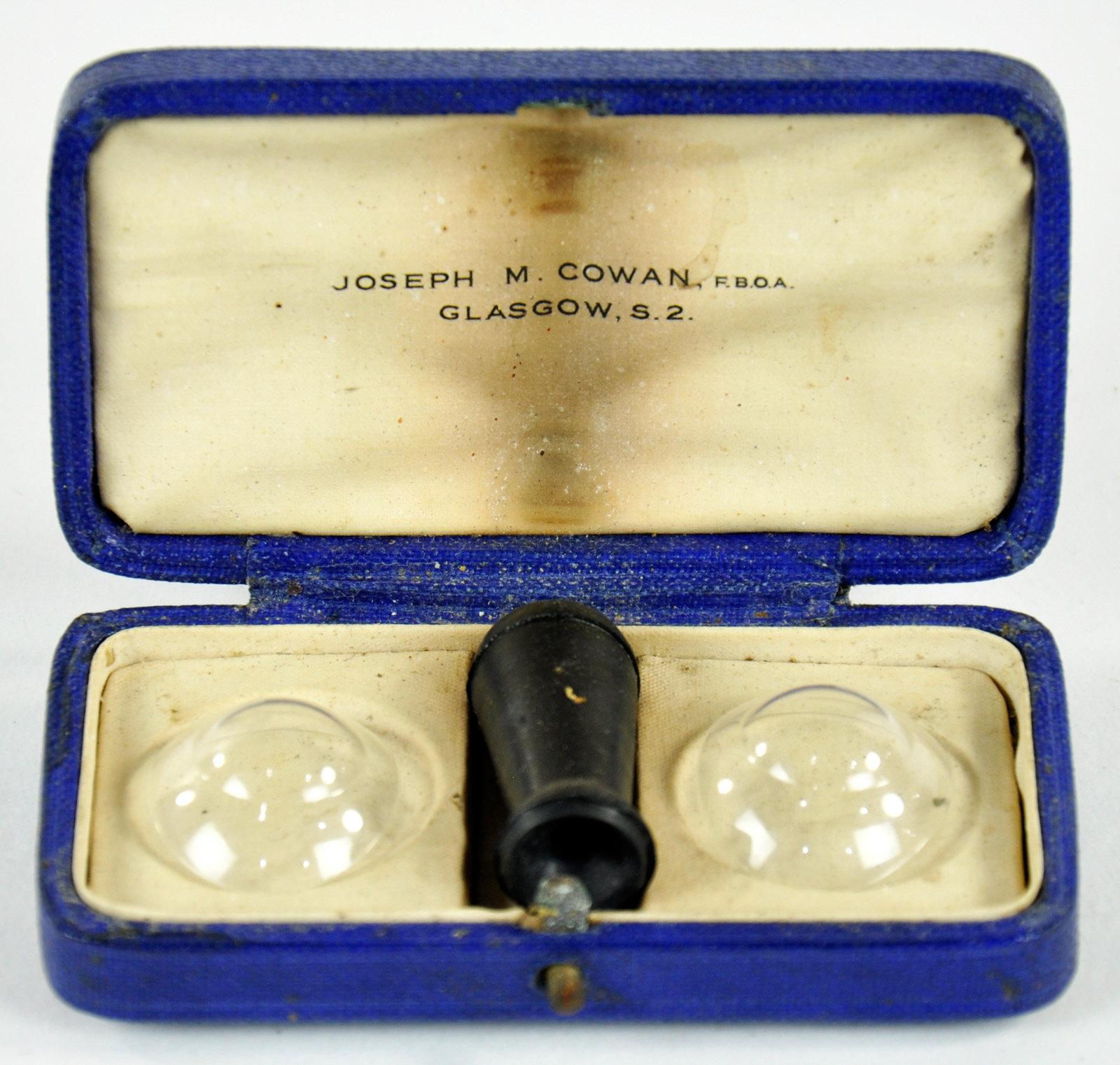 Disposable plastic contact lenses came along in the 1980s. These had the benefit of being lighter, thinner and (thankfully) less prone to breaking. Modern lenses come with coatings to reduce glare. As new technologies unfold, it’s a case of ‘watch this space’ to see what comes next.